The Generator, a non-profit art and workshop space in Sparks, is closing in on a deal to buy land east of downtown Reno to construct an expansive arts complex. The proposed $2 million complex would include more than 35,000 square feet of workshop space, as well as an outdoor sculpture garden and performance area.

At the Feb. 14 Reno City Council meeting members will discuss the terms of the lease, which would cost $33,000 over five years across three separate parcels, located where the Wells Avenue overpass crosses the Truckee River.

In a four-year strategic plan provided to the City, directors pointed to the overwhelming community response to The Generator and rising costs as the main reasons for expanding.

“We had no idea how sorely this facility was needed,” they wrote. “Without The Generator, Reno’s creative community would experience significant attrition and possible collapse.” 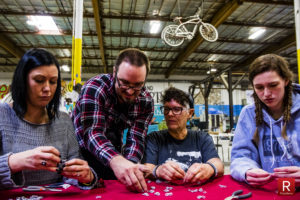 Students at The Generator learn the basics of chainmail construction. Image: Ty O’Neil

Since its opening in 2013, The Generator’s primary source of revenue has come from donations. To pay for the new building and other expenses directors are seeking new funding sources.

An ongoing series of workshops, ranging from pottery to wood and metalworking, are held on an almost-daily basis at the space. Also, on Feb. 1, as noted in an email to its members, The Generator ended free memberships; users now pay $25 monthly for use of the space, with access to the shops costing $50 a month. To keep the space attractive to lower-income artists, roughly a third of the memberships will be discounted.

According to the email, approximately one-third of The Generator’s revenue will come from memberships.

“The community comes first around here and accessibility is one of our top priorities,” the directors said in the email. “We want future generations to have access to tools, skills, and space.”

Assuming fundraising efforts go as planned, leaders at The Generator hope to complete the new arts complex in 2023, with construction planned to begin within the next two years. In the short term, The Generator is working to raise more than $600,000 to build the first 10,000 square-foot building in the Wells overpass area.

In the aforementioned strategic plan, The Generator’s directors expressed optimism their vision would result in other cities developing similar spaces.

“We hope to inspire the next revolution of ideas that lead us into a bright and equitable future,” they wrote.

For more information on The Generator visit https://www.therenogenerator.com/.

The Generator cleans out its Sparks warehouse with no new...