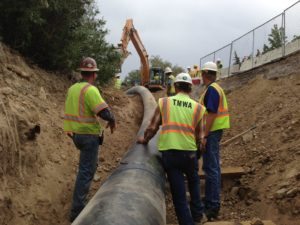 The Truckee Meadows Water Authority (TMWA) board on Wednesday approved an agreement to purchase assets of West Reno Water Company, which will allow it to provide service to the Verdi area later this year.

Assets include all groundwater rights at Boomtown, its RV park, the convenience store, Cabela’s sporting goods store, and Dermody Properties. Meridian 120 North, owned by Reno Land Inc., and proposed developments on the south side of Interstate 80 would be served as well.

TMWA initially consulted West Reno Water about a possible purchase because the private utility only provided groundwater and there was concern over long term sustainability of the groundwater resource.

The approximately $870,000 price tag consists of $700,000 in water system assets, along with legal and engineering costs, pipe casting, and easement across the Truckee River.

“The land and easement issues are complicated, but we’ve got a good hand on the water rights issue,” said John Enloe, TMWA director of natural resources, planning and management.

Facility improvements are estimated to cost TMWA between $14 million and $16 million.

Creation of a special assessment district to pay for system upgrades is almost unavoidable, TMWA board members said. Such districts enable infrastructure improvements while passing on cost to property owners who benefit.

Since TMWA doesn’t have authority to create such a district, responsibility would fall on municipalities.

Before final acquisition of West Reno Water, TMWA has a 120-day due diligence period to conduct studies, surveys, and other inspections it deems necessary at its expense.

VIDEO: Are you prepared for the next flood in the Truckee Meadows?