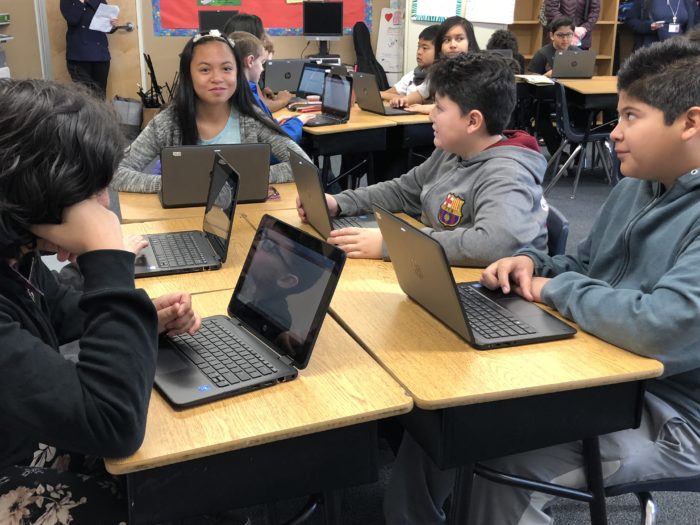 Students at Stead Elementary School use new computers purchased with funds saved through solar energy use at the school. Image: Carla O’Day

Thirty-four new laptop computers, among other things, were purchased recently with electrical savings generated by solar panels installed about 2 years ago at Stead Elementary School.

Electrical savings of $12,328 in 2017, along with a smaller amount generated in 2016, also allowed the school to purchase a buddy bench and an electronic system for visitors to sign in and print a name badge. 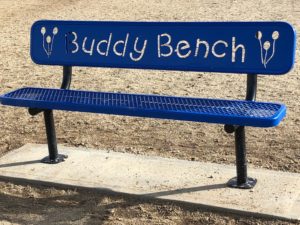 The buddy bench is a tool to eliminate loneliness and encourage friendship on the playground. Children who want someone to play with can sit there and classmates are encouraged to include them in activity.

Principal Susan Egloff said the Hewlett-Packard laptop computers are for classroom use and have freed up space in the school’s lab.

“The students can take assessments in the classroom instead of going to the computer lab,” Egloff said. “We have computer classes all day; and if we have to do testing, all that gets cancelled. It’s nice to have these extra devices.”

Plans for future savings include the purchase of iPads for use during small group instruction, Egloff said.

The solar project was the result of a partnership between NV Energy and the Washoe County School District. It saves approximately $16,500 on the school’s electric bill, with 25 percent of the savings placed in an account to maintain the system. Under terms of the partnership, the money saved was allocated to programs and services to benefit the school and its students.

“Students are living this lesson and learning that renewable energy and energy conservation can have a direct and positive impact on their lives,” said Jason Geddes, district energy conservation and sustainability program coordinator. “The students also get the direct benefit from the energy savings through the computers that can better their educational experience.” 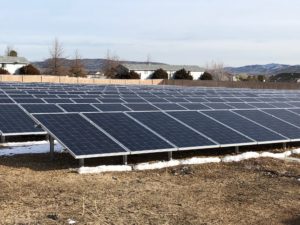 Geddes said the state Public Utility Commission is expected to decide this summer whether it’ll continue this program.

“There was a pot of money the legislature allocated to install 235 megawatts of solar and there was a budget to do it and it came in under budget by about $40 million and the PUC is deciding how to spend it,” Geddes said.

Thirty-six of the district’s almost 100 schools have had solar installed under various programs during the last decade, the earliest ones being Gerlach High School and Johnson and Natchez elementary schools.