Pignic Pub and Patio Gets Back Its Food Service

Pignic Pub and Patio’s owner Ryan Goldhammer said last week that food service is back at the pub.

“I still have to jump through hoops, but yes, we have an approved variance and are back open to public grilling,” he said. “(Customers) must bring a receipt (with their) meat in original packaging.”

Customers could bring in their own meat to grill at the pub’s patio, but the Washoe County Health District (WCHD) shut down grilling and other food service in November.

It’s been an ongoing ordeal for months, and Health District officials blamed Pignic for the shutdown.

“One of the things required is a certified food protection manager on site, which is a recurring problem (with Pignic),” said Health District Officer Kevin Dick.

The county also found 20 health code violations in February 2017. Most of those were resolved at the time of the inspection or soon thereafter, Goldhammer said.

In addition, new food regulations were passed since Pignic opened, putting them out of compliance.

Goldhammer said that they were never notified of the new regulations or workshops, but county health’s public information officer, Phil Ulibarri, disputed this.

“We held several workshops prior to the regulation changes and had at least two WCHD board meetings to discuss the new (regulations) and new service fees associated with food establishments,” he said.

Ulibarri cited ThisisReno’s posting of the announcement of the regulations, in addition to workshops and hearings. He said that several notices were sent to facilities impacted by the new regulations.

The new regulations did not support Pignic’s operation, in place since 2014, which Goldhammer said county officials previously approved.

“The Health District has been working hard to update its food safety program,” Dick explained. “Prior to 2015 we were operating with food safety regulations that dated back 30 years. With the support of the Food and Drug Administration, we were working with updating food safety requirements to make them consistent with state requirements.”

Dick also said that there’s a question whether Pignic’s original operation should’ve been approved in the first place.

“Certainly with the new regulations it is not allowed,” he said — unless Pignic applies for and gets a variance.

What Happened Behind the Scenes

Pignic had its variance approved last week in order to continue doing business similar to before. It hired lobbyist Tom Clark to help with the process.

Both sides – Pignic and the Washoe County Health District — were in dispute over the process. Pignic defied its cease-and-desist from the county and allowed food service after it was told not to.

Health officials resorted to name calling and surveilling Pignic’s social media accounts, as well as monitoring Pignic from outside of their operation in order to catch them violating health and safety codes.

Internal emails and texts show Health District staff lining up to defend its shutdown of Pignic.

“Pignic has two events with food advertised for this week – (an) anniversary celebration (whole pig roast) on 10/21 and PigToberFest (with various bratwursts) on 10/14,” wrote Ellen Messinger-Patton, an environmental health specialist with the Health District. “The screen shots are attached. I have also included a screen shot of the advertisement for the bartending competition this past weekend that includes tacos.

“Let me know how you’d like to proceed,” she wrote in October to health officials Amber English and Tony Macaluso.

After a video interview we did with Pignic in November, Ulibarri transcribed a part of the interview — the portion where Goldhammer admitted food was being served at Pignic after the Health District sent him a cease-and-desist notification.

Ulibarri sent the transcription of the interview to county staff, along with copies of comments made by ThisisReno readers on Facebook.

Chad Westom, director of the environmental health services division, then prompted an inspection by an inspector “not known by Pignic” and possible enforcement action against Pignic’s owner.

“If they are only serving drinks and in compliance, fabulous,” he wrote to his staff. “If there is more suspended food service occurring that should be inconspicuously documented (i.e., cellular pics and ask a couple questions) and then they leave. We will process the evidence on the following Monday with appropriate enforcement action.”

Ulibarri defended the county’s surveillance as being in accordance with state law.

“When we notice violations, we are required to investigate,” he said. “Continued violations would mean more scrutiny until violations are resolved.”

The video above got the attention of Health District staff, which transcribed a portion of the interview and copied This Is Reno’s reader comments in an email to other staff.

The Health District’s Chad Westom said that it would cost up to $2,000 to reimburse for staff time to collect the records because the agency is funded by fees. 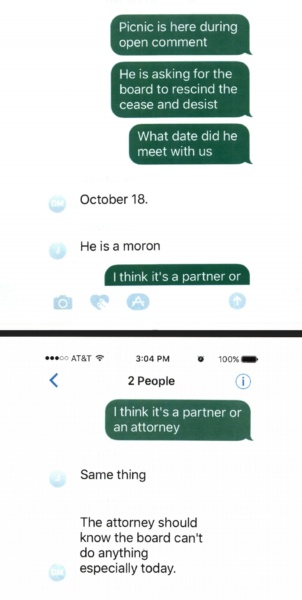 Text messages show county staff referring to Pignic’s representative as “a moron” during a public meeting.

We disputed that. There is no provision in the Nevada Public Records Act to charge for staff time, and the county’s public records request form cited policies that were years out of date and out of compliance with state law.

County Communications Director Nancy Luenhagen has since said that the county is revising its public records policy to make it consistent with the law. It is under review with the District Attorney’s office, she said.

The Health District, through its assistant district attorney, ultimately complied with the public records order.

The records show county staff disputing much of what was said in the video.

Her response: “He really provided an interesting interpretation of the series of events from Friday,” referring to Clark’s attempt to submit an operational plan to the district by a required deadline.

Another interaction: Clark had a text exchange between County Commissioner Kitty Jung, who sits on the district health board.

Clark wrote to Jung: “They operated just fine for three years with no health issues from anyone. It’s frustrating when you work in good faith and then get slapped in the face.”

Not so, said Dick in a rebuttal sent to Jung via text.

“When I left on Thanksgiving vacation … the variance application had still not been submitted,” Dick wrote to his staff. “During this period, more health violations came to light with an unpermitted bar constructed in the attic and failure to pay for renewal of the operating permit of the permitted bar.

“If Mr. Clark wants to assign blame for lost (revenue) and wages he should look no farther than the Pignic owners and himself.”

Westom also noted that “Clark keeps banging his drum, working politics, to get Pignic reinstated prematurely. It’s not going to happen but I’m going to call him; attempt reason.”

Clark attended a health district meeting on Pignic’s behalf. During the meeting, Health District staff were texting one another.

“Pignic is here during open comment,” Macaluso wrote to staffers Dave McNinch and Jim English. “He is asking for the board to rescind the cease and desist. What date did he meet with us?”

Macaluso: “I think it’s a partner or an attorney.”

McNinch: “The attorney should know the board can’t do anything especially today.”

(English and staffer Luke Franklin were also found, through a prior public records request, to be making light of a raid on Nevada Recycling and Salvage last year as part of a spat with the City of Reno.)

Westom, who said he was unaware of that exchange, said that behavior would be “followed-up on.”

“Courteous and respectful treatment of coworkers and the public — everybody,” is expected, he said. 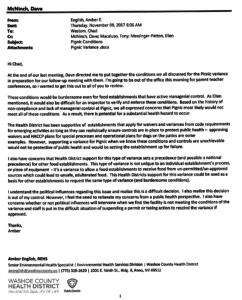 Pignic’s bars never shut down, but customers can once again bring in their own meat to grill on the establishment’s outdoor grills.

Despite the ongoing back-and-forth with the Health District, Pignic’s variance was approved in December by district health board and then signed by Kevin Dick.

The county is expected to keep a keen eye on Pignic, something foreshadowed in November.

“I understand the political influences regarding this issue and realize this is a difficult decision,” she wrote the Westom. “I also realize this decision is out of my control. However, I feel the need to reiterate my concerns from a public health perspective.

“I also have concerns whether or not political influences will intervene when we find the facility is not meeting the conditions of the variance and staff is put in the difficult situation of suspending a permit or taking action to rescind the variance if approved.

Meantime: “They’ve gotten their permit back and approval of variance so they can be innovative with their business model,” Westom said. “That allows them to not fully comply with the regulations, but there are other steps and monitoring so that the customers and public will be safe.”