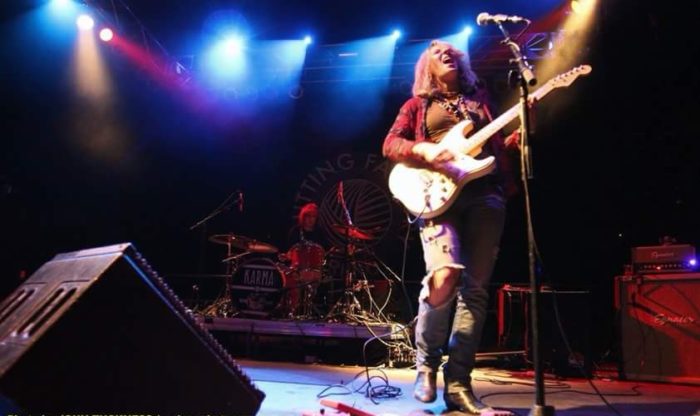 Local Band Alert: ThisisReno takes a closer look at local bands in this series of 5-minute interviews. This week we chat with The Grimtones.

I’ve known The Grimtones for many years, way back when they were known as Scarlett Presence. The band includes Carter Stellon (drums, harmonica, bass) and Michelle Belle (guitar, keys, bass). The duo has been writing, recording, performing, and touring together since 2008. In that time they’ve played a number of local venues and shared the stage with Agent Orange, Y&T, and The English Beat. 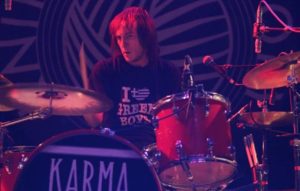 The duo became a trio with the addition of Nik Taro on bass in summer 2017.

The band is working on a second full length album, a follow-up to 2014’s “Sing The Body Electric.” They’ve also released several singles including “Miss Murderface,” “Words,” and “Last Words (Get Up and Move).” All are available on their Bandcamp page, https://thegrimtones.bandcamp.com/music.

I talked to the band at one of their recent gigs and this what they had to say:

ThisisReno: Who came up with the band name and logo, and what is its meaning, if there is one?

The Grimtones: The dictionary. It’s really quite literal: we had the tones, we found the grim.  As for the logo, we like kitties.

GT: As Carter puts it, “Loud and, uh, ya know, f*@kin quiet sometimes, but not often. It’s just sound. I don’t know.” We never play the same thing twice. Always loose and tight at the same time. Our music does not pertain to one genre.

TIR: What bands are you influenced by?

TIR: If you could go on tour with a national touring band who it be?

TIR: What do you think about the Reno music scene?

GT: Reno’s scene definitely seems to be growing, and it’s very nice to see more people out to catch live bands lately. We adore our fans as well as all the bands we play with, and always try our best to reciprocate our love and support for our amazing peers. There is no shortage of badass people, musicians, and groups in this town.

On the other hand, we dislike the small part of the scene that, to us, can seem political and “cliquey”  at times, and we try to steer clear from any egotistical and non-inclusive attitudes we have observed, and instead focus on showing our kindness and support to help us all grow together.

I’ve seen just about every version of this band over the years and the one thing that they have always had is a great sound and stage show. If you have never been to one of their shows the next one will work. Check their Facebook page at https://www.facebook.com/TheGrimtones/ for upcoming gigs.

And remember to always support your local bands and venues … Go to a Show!