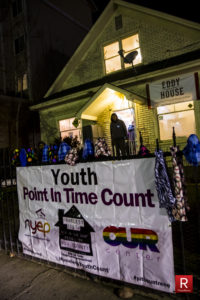 For 24 hours volunteers and staff from the Eddy House conducted the Youth Point in Time Count to create a better understanding of the number and condition of youth homeless in the Reno area.

(The word youth in this article describes people between the ages of 18-24. Anyone under the age of 18 is considered an unaccompanied minor, which is illegal in Washoe County.)

The count was carried out Thursday, Jan. 25 from 12:01 a.m. until 11:59 p.m. This was the first year the event took place at the Eddy House, which specializes in youth homelessness in Reno. In 2017 the count was taken in downtown Reno in erected tents.

During my visit, at around 7 p.m., event organizer Meredith Tanzer informed me that the count was at 86 homeless youth. The youth are attracted to the once-a-year event because it is an opportunity for them to receive donated items that help them get through the winter. Backpacks and jackets are often the most sought-after items, but sleeping bags, warm hats, scarves, socks, and other items to stave of the cold were all on hand. 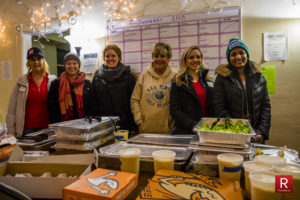 In addition to material goods, volunteers distributed warm food, bagged food, and an assortment of breads and desserts. Four stylists from Cost Cutters, a chain haircutting establishment, volunteered at the event in the late afternoon hours and performed 25 haircuts.

I was on hand to witness the first ever conflict that the event has had. Two individuals who had past experiences with one another crossed words in anger. The incident would not be worth mentioning but to note that it was quickly diffused by both Tanzer and her volunteers. Later in the evening I spoke to Tanzer about the conflict and she reiterated that Eddy House is a safe place for the youth and the volunteers.

While the evening was very cold, in the mid-20’s during my two-hour visit, Tanzer noted that it was the warmest count to date. It was a statement that emphasized the physical challenges of being homeless.

When I asked Tanzer about Eddy House goals for 2018 she noted two for the coming year. The first is to gather more funding, especially from businesses in the Reno area that would like to help the community. Grant funding is not in excess, she explained, and the organization is in need of additional funds. The second goal is to create a 24-hour shelter specifically serving the youth homeless. Youth homeless have stated safety concerns over the area’s main shelters and have said that staying on the streets is a safer alternative.

For more information on Eddy House and its programs and services visit http://eddyhouse.org/.