On Wednesday, Jan. 17, a group of happy politicians and others gathered at Sixth Street and Evans Avenue in downtown Reno to participate in a “groundbreaking” for Apple’s new shipping-and-receiving facility. An effusive amount of self-congratulating was on display, and local TV news cameras were in operation when decorative shovels were handed out and the fun began.

One block away, and 14 months earlier, a young woman named Andrea Whalen stepped into a marked pedestrian crosswalk at Sixth and Lake, where she was run down and killed by an errant motorist (who is now said to be too aged and too debilitated to be prosecuted). Speed may not have been a factor in this particular accident, but not long after it, I walked west along Sixth Street from Evans all the way to Washington, and back, and nowhere along Sixth was I able to discover a speed-limit sign. I did see a few such signs on cross streets, but they were not nearly as numerous as the many holes and crevices I encountered in the sidewalks.

In fact, one may walk in any direction four or five blocks from Sixth and Evans, and, if sentient, soon understand why this neighborhood is so often referred to as “blighted.” Most of the people who live in this neighborhood are poor, and I am one of them.

But now, with Apple’s new and celebrated facility in our midst, are my neighbors and I soon to experience significant civic improvements here? Better roads and sidewalks? Better lighting? Improved pedestrian crosswalks? A stronger police presence? How many of our area’s residents are soon to be employed inside Apple’s new facility?

Of course, I don’t really believe that much of that, or even any of it, is actually going to happen. What I believe is more likely to happen is that Apple’s shipping-and-receiving warehouse will install strong physical security, and that it will become, for most of us here, just one square block of activity that will affect our lives mainly due to its trucks going in and out all day long and carrying “equipment” miles across town to Apple’s Data Center.

So why wasn’t the shipping-and-receiving center built right next to the Data Center, or even within it? Then it more properly could have been named a Supply Center, with its “equipment” being moved only within the building, or to the building next door.

Well, sure, but that would have made too much sense, and this is why: tax abatements. You see, Apple was required by our political leaders to place the new facility, as it has been placed, within something called the “Tourism Improvement District.” (It’s rare to find any tourist in my neighborhood who is not a lost tourist, and so I do have to wonder: how many tourists arrive in San Francisco or New York or Miami Beach eager to check out the latest shipping-and-receiving operations?) So, money definitely is the reason why Apple agreed to this nonsensical, and so political, condition.

Suppose The Coca-Cola Company wanted to build a massive new bottling complex here in Reno, but only if they could get in on this “tax abatement” contrivance? Do you think they soon would be told that they would have to build two complexes, one to fill the bottles that would be manufactured by the other one? If Coca Cola agreed to this absurdity (money talks), soon we would be experiencing the joy of countless Coca-Cola trucks clogging our streets. In reality, we are going to have to deal with plenty of unnecessary Apple trucks instead, because Apple did cave, and say, in essence, “You got it, pal. Now show us the money.”

I am prepared to believe that the arrival of Tesla and Apple and other tech companies to our area will result, in time, in an improved quality of life here, but that preparation is hindered by much doubt.

Right now our political leaders are eating pie in the sky that has yet to arrive on the average Reno citizen’s plate. What I have been seeing instead is increased rents, more traffic, and more hyperbole from our “leaders” than honest civic advancement. For example, 16 months ago, there was a lot of hullabaloo concerning the demolition of two old motels on South Virginia Street, across from Circus Circus. 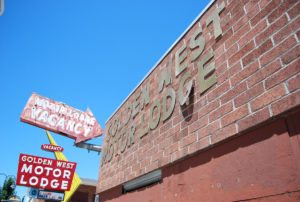 One of them, the Golden West, actually consisted of two buildings. The second of these was termed an “Annex,” and it still stands, across an alley from the demolished front building (with the ground it stood on now encumbered by “art” — but take a look and make up your own mind about that — and not instead adorned by housing or a place for anyone’s employment).

The demolition of the Virginia Street Golden West Motel building inspired the same sort of political glee that accompanied Apple’s recent “groundbreaking.” In this case, though, a building was coming down, not going up.

According to the Reno Gazette- Journal, Reno’s Mayor welcomed this demolition by saying, “Who doesn’t like to demolish something!” Yet, no words were offered at that time as to why the second Golden West building would remain standing, so persons familiar with this event, but not with the locale, may be excused for continuing to believe that the entirety of the Golden West Motel was taken down then.

So, what are the plans, if any, for that building?

I have a suggestion. Comprised now of some 20 long-abandoned motel rooms, the building could be refurbished and rejuvenated into some 10 or 12 apartments, in which could reside unemployed Reno citizens ready and willing to adhere to a disciplined job-search program. They need not be addicts or former addicts. They would just have to be persons in need who would be willing to remain clean and sober while searching for work and after obtaining work. I believe there are several capable local social service agencies that would be willing to be a part of, or even the administrator of, such a program.

This is not a flashy or whiz-bang plan; it’s a sensible one, and no unnecessary ceremonies would be required to get it under way. Just some hard work, dedication, compassion, and cooperation. Those wishing to be assisted in this way would have to apply, be screened, and remain committed to the program for a year or more. There would be no playing with shovels, and nothing would be demolished, but lives could be rebuilt and families strengthened. And there would be no unnecessary traffic clogging our already-jammed streets.

In the meantime, what we’re going to be seeing are continued rent increases, and new workers coming to town to reside in those motels which remain, while they scramble in their off hours searching for apartments they just might be able to afford.

And, my neighbors and I regularly will be walking by a block-long shipping-and-receiving operation, with an endless departure and arrival of trucks getting in our way. And we will wonder, then as well as now, why new low-cost housing could not have been built on that block. And then we will remember who our political leaders really are, and what truly interests them.

Bob Stevenson has lived in downtown Reno since 2010.