By Carla O'Day Published: December 12, 2017Last Updated on June 26, 2022
The RSCVA board met today with the Washoe Board of County Commissioners. Commissioners and Mayor Hillary Schieve heard from the Washoe County School District's Pete Etchart about the plan to transfer ownership of Wildcreek Golf Course to the district. Image: Bob Conrad.

Two government agencies directed their staffs Tuesday to draw up paperwork that would transfer a portion of the Wildcreek Golf Course to the Washoe County School District for a new high school to open in about 4 years.

Washoe County and the Reno-Sparks Convention and Visitors Authority must further review final agreements before voting on a land sale.

The joint meeting resulted in an 8-1 RSCVA vote and a 4-1 Washoe County Commission vote in favor of kickstarting the land transfer. Commissioner Vaughn Hartung and RSCVA board member Ed Lawson, also a Sparks city councilman, said they support building a school but dissented because there wasn’t language in the vote that first required the district get permits through the City of Sparks. 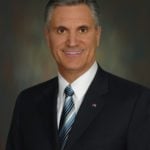 “My biggest worry is that we lose a golf course and we lose a school,” Lawson said. “We should hold the land until the school district gets a permit in Sparks so we still have a golf course if things fall through. We have one abandoned golf course (D’Andrea) in Sparks and we don’t need another.”

The 2,500-seat school at Wildcreek would replace Hug High School, which was built in the late 1960s and serves about 1,450 students. Plans are to close Hug at the end of the 2020-21 school year and send most of its students in fall 2021 to the new school at Wildcreek, located about two miles to the east. It would also draw students from Sun Valley who would otherwise attend Spanish Springs High School, which is overcrowded.

Preliminary plans show the new school with a 9-hole reconfigured golf course. Washoe County would retain about 137 acres of the property and is expected to reinvest it back into the Wildcreek area.

Some members of the public, including parents, teachers, and students of all ages, spoke in favor of the project.

Hug students and teachers mentioned strangers sometimes come on campus and that the school is badly in need of repairs. The HVAC also makes excessive noise, they said

“There’s not a day that goes by that I don’t think about safety,” Hug teacher Hilda Gallaro said. 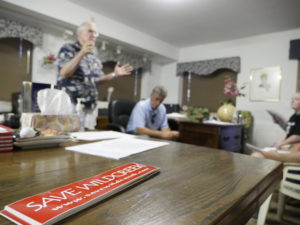 Some residents of the Wildcreek area have opposed construction of the school at that location, citing traffic and preference to keep the golf course as is.

Darla Lee said she doesn’t think concerns of residents have been heard. She also said the school should be built elsewhere and that the only plausible reason for this site is that the RSCVA wanted to get rid of the property.

“It’s unfortunate that so many students believe a good education is tied to shiny, new buildings,” Lee said.

Wesley Griffin said the maintenance of green space and recreation is important.

“If this goes forward, there’ll be a legal dispute over this,” Griffin said.

Long-time resident Valerie Wade said there was significant opposition to McCarran Boulevard and to the construction of Reed High School in the 1970s.

“Our community is in a constant state of growth,” Wade said.

Richard Jay said the community should work together and set a good example for the children.

“The opponents of the school have an all-or-none attitude,” Jay said. “Why can’t we have a school and a 9-hole golf course?”

Added Hug teacher Janet Roberts, “This would be an amazing opportunity to involve the youth in golf.” 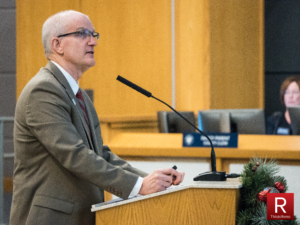 Other sites on the shortlist were east of Truckee Meadows Community College (TMCC) main campus, south of TMCC, and on Bureau of Land Management (BLM) property north of Wildcreek. The biggest challenges with the TMCC sites were terrain concerns, including school buses driving on hilly streets in winter, along with multiple property owners and inadequate road access. The BLM property consists of no utilities, no access roads, a potential lengthy federal acquisition process, and would require extensive grading due to slopes, the assessment stated.

The school district spent about $200,000 to conduct due diligence on the Wildcreek property. This included surveys, traffic studies, environmental assessments, and addressing issues with the Federal Aviation Administration, among other things. Wood Rodgers surveying and engineering firm predicted the school would generate more than 4,200 trips daily, although many won’t occur during commuter hours. The report said there’s no reason a high school can’t be built on the course.

Preliminary appraisal for 75 acres done by Johnson Perkins Griffin Real Estate Appraisers and Consultants came in between $1.5 million and $1.875 million. The $375,000 range would depend on which part of the property the district purchased. The district would also have to pay $2.23 million in water rights and for a $1.3 million effluent agreement to Sparks.

The exact cost of the school hasn’t been determined because it hasn’t been designed, although estimates range from $170 million to $190 million. If all goes as planned, the district will have the land by the summer and ground will be broken in December 2018, Etchart said.

“The rising cost of construction is not unique to the school district but our revenue has also gone up,” Etchart said.

Funds for school construction are coming from the November 2016 0.54 percent voter-approved sales tax increase. Such dollars can go only toward construction of and refurbishing of facilities. This money cannot be used for teacher or administrator salaries or other school operations.