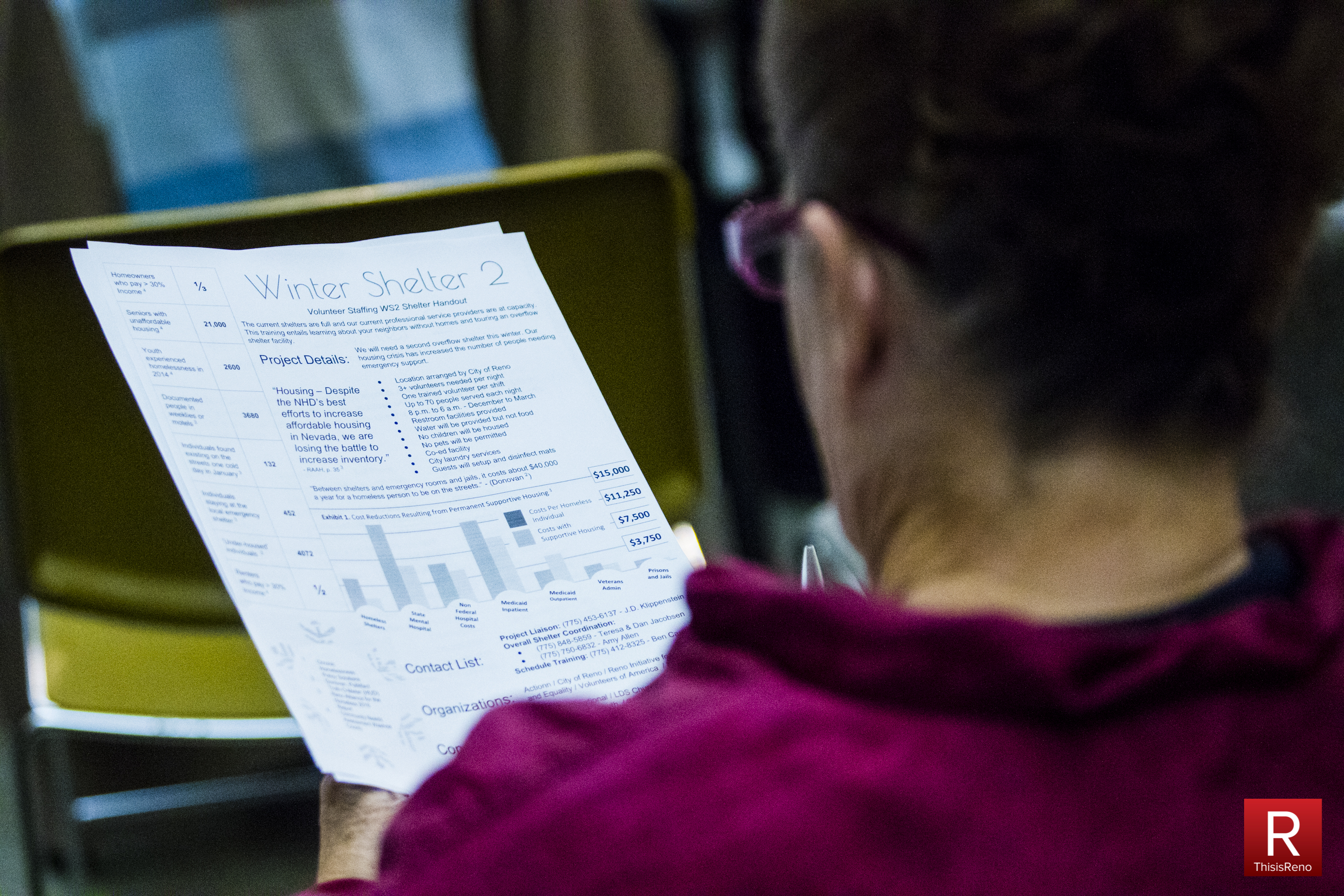 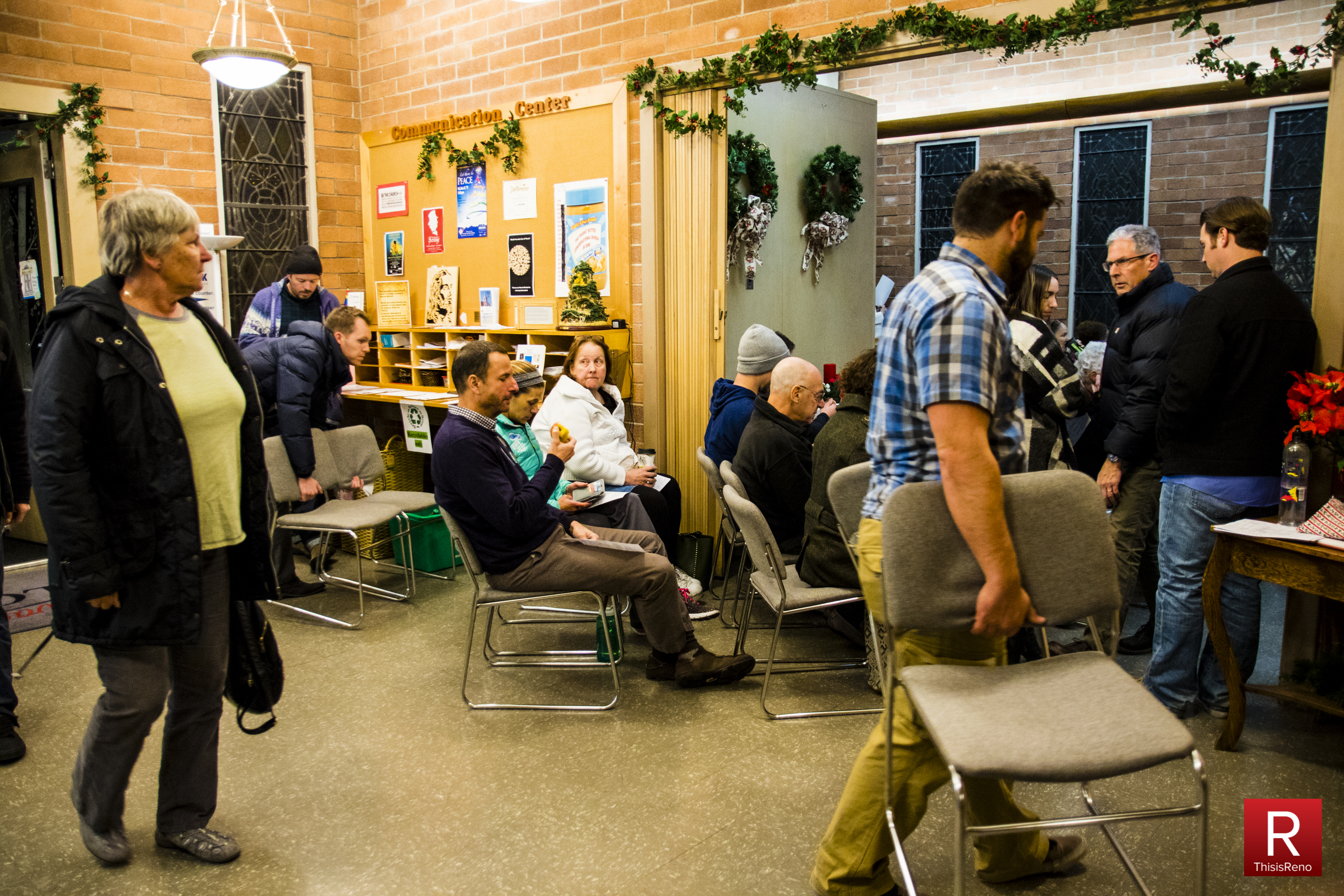 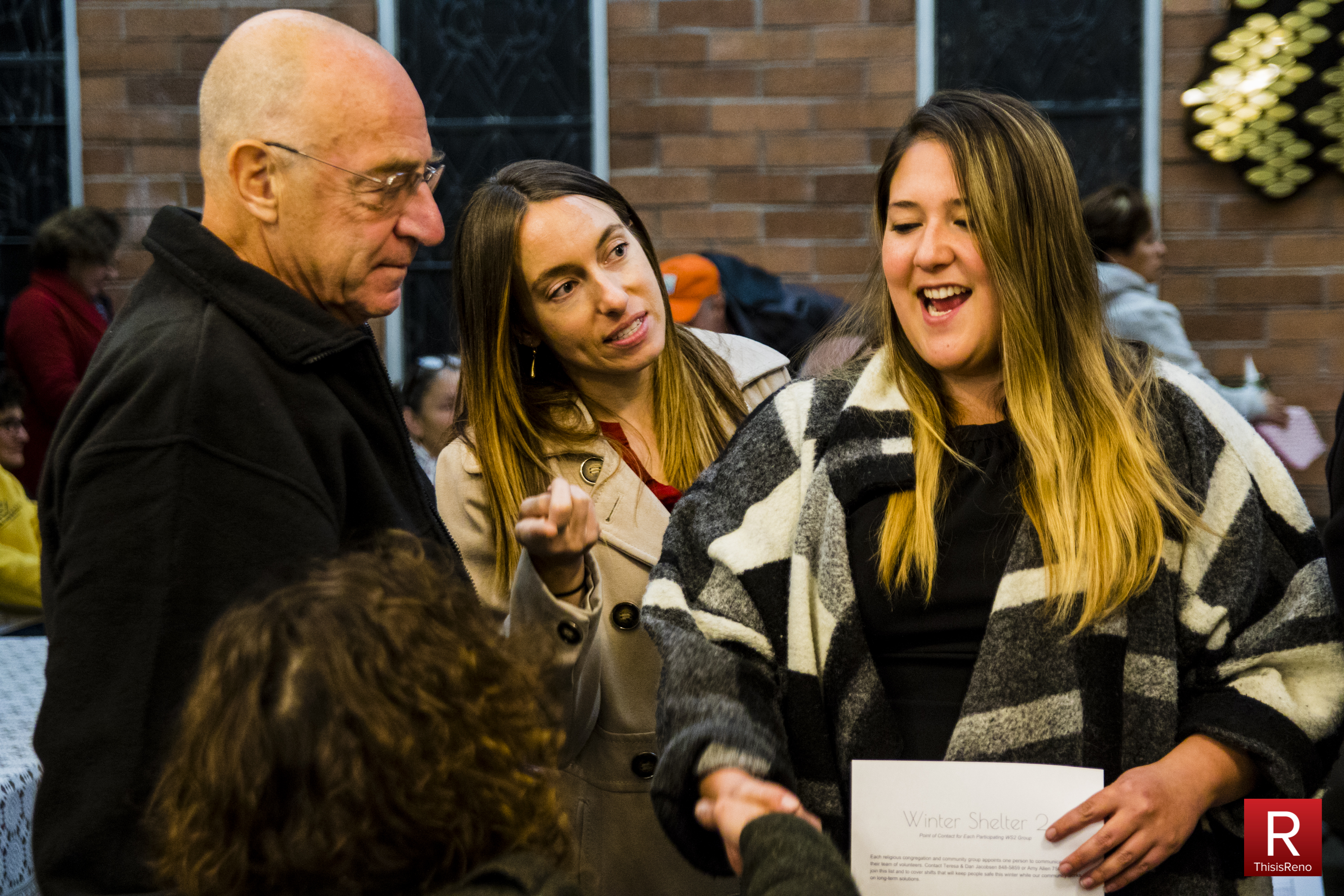 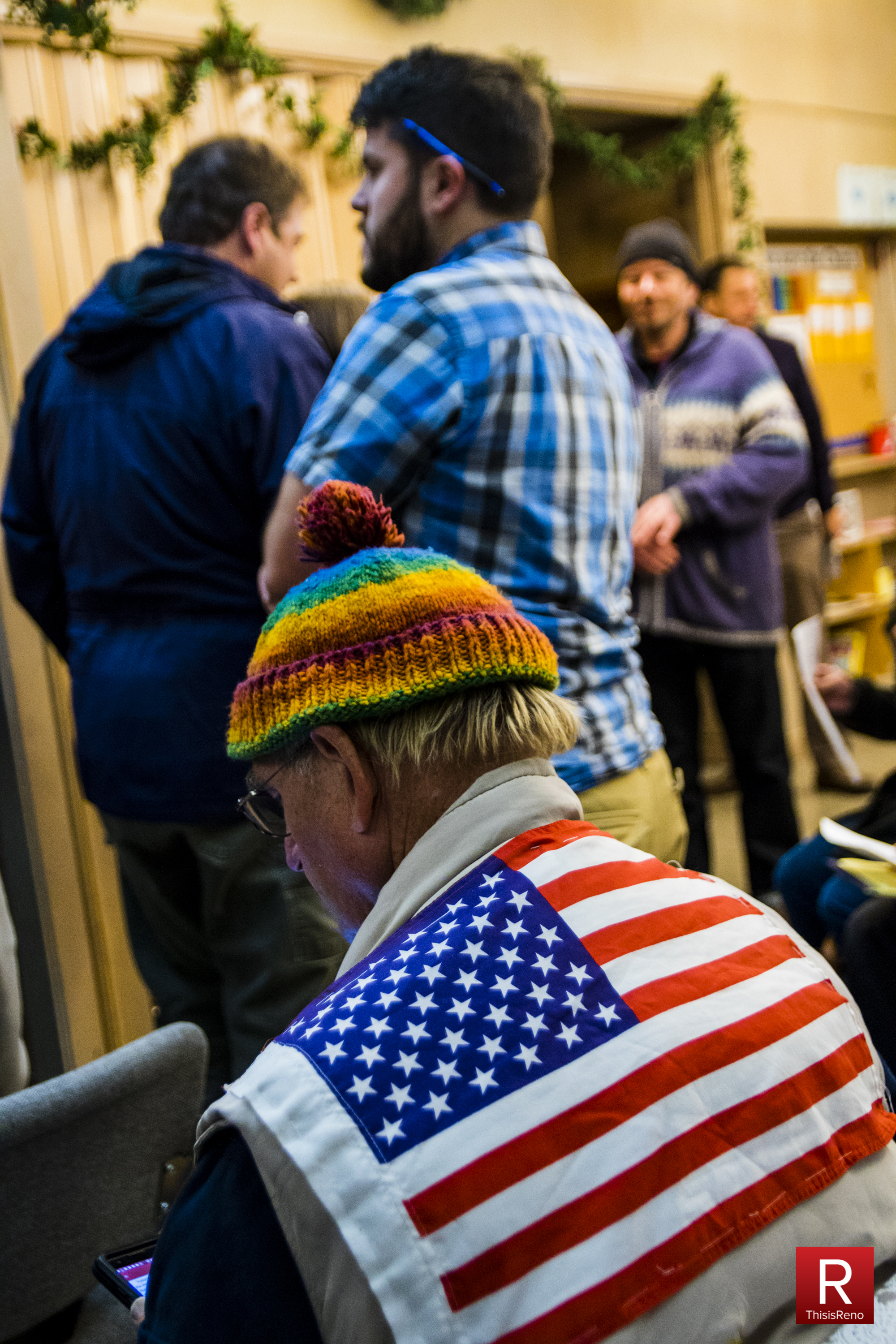 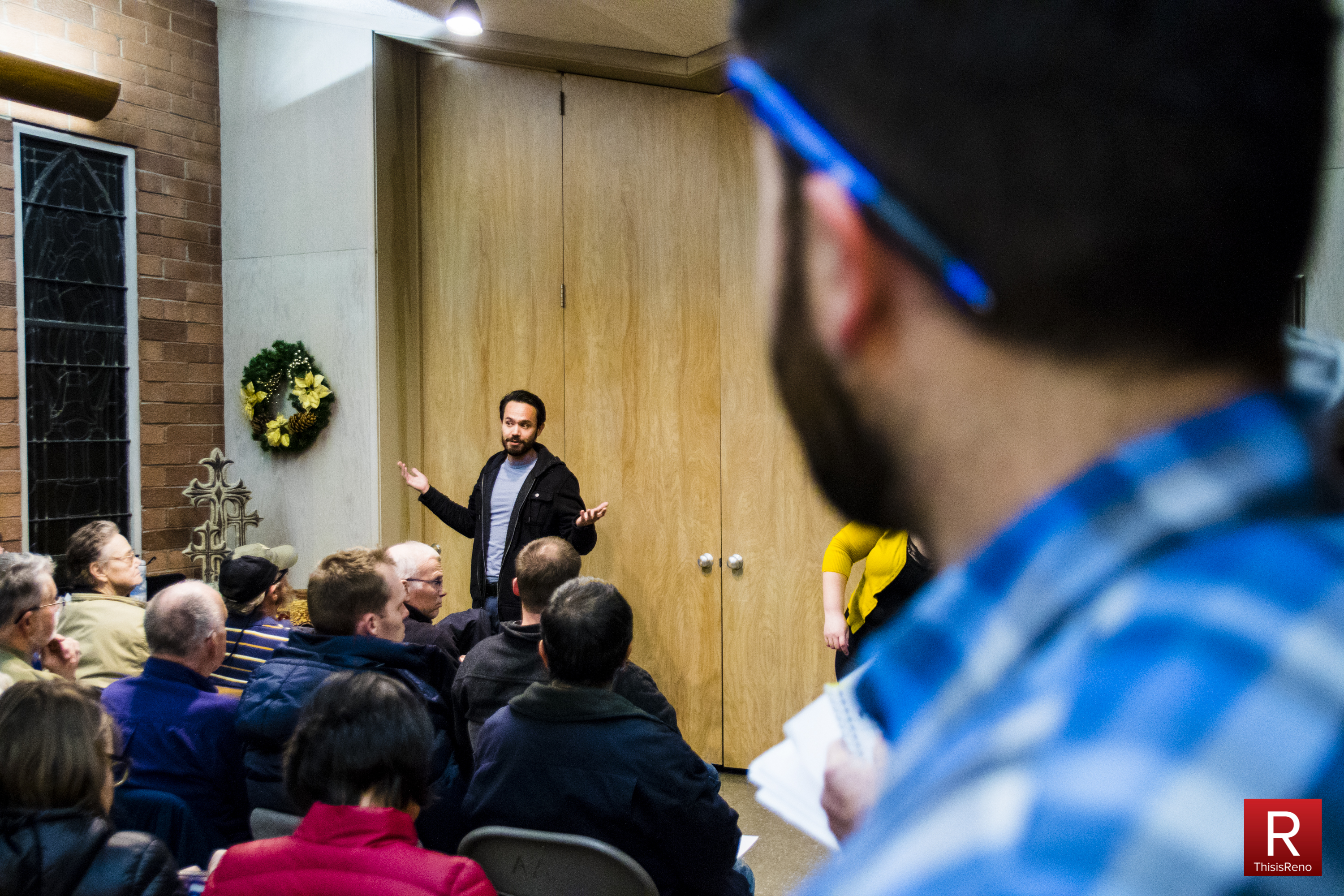 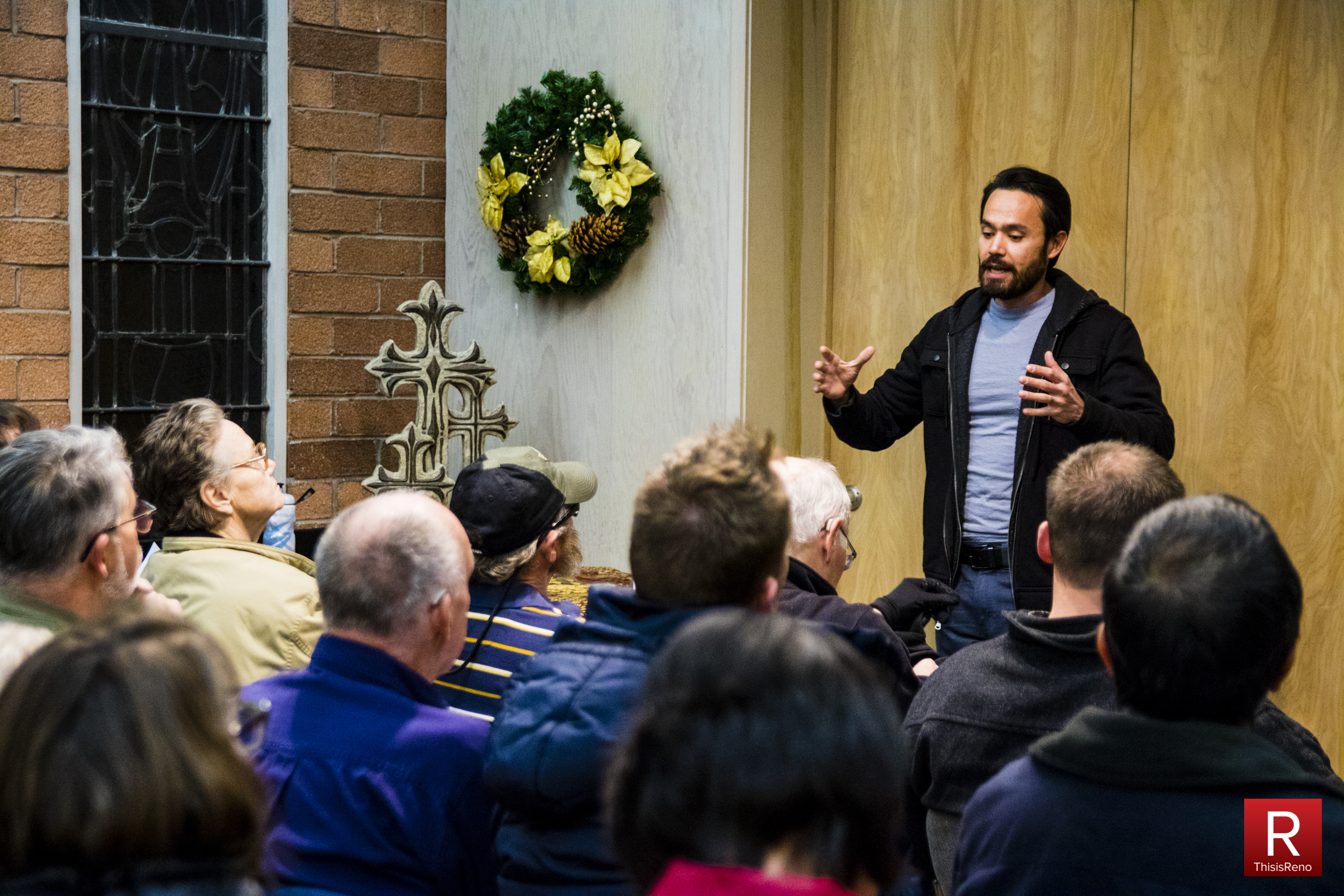 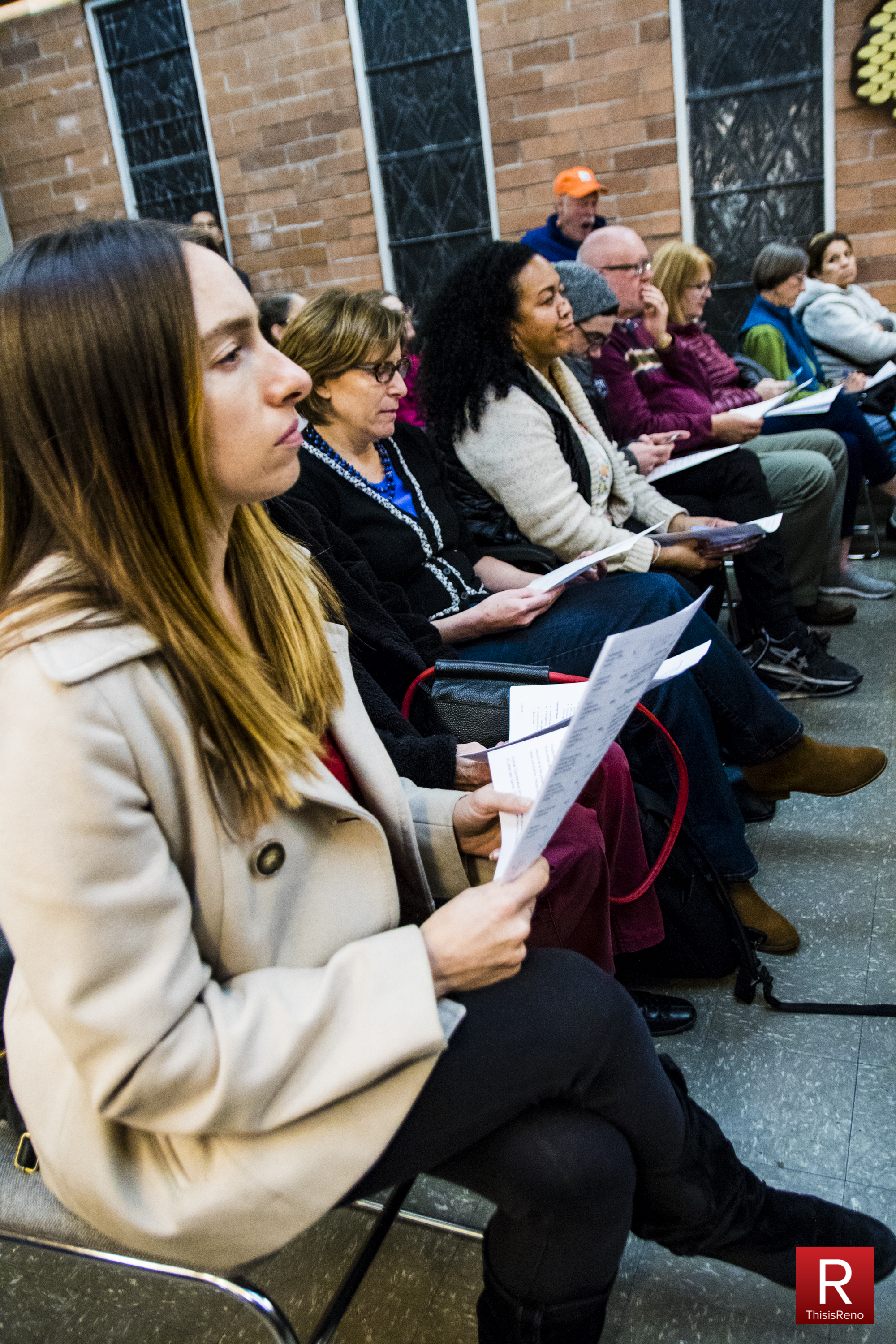 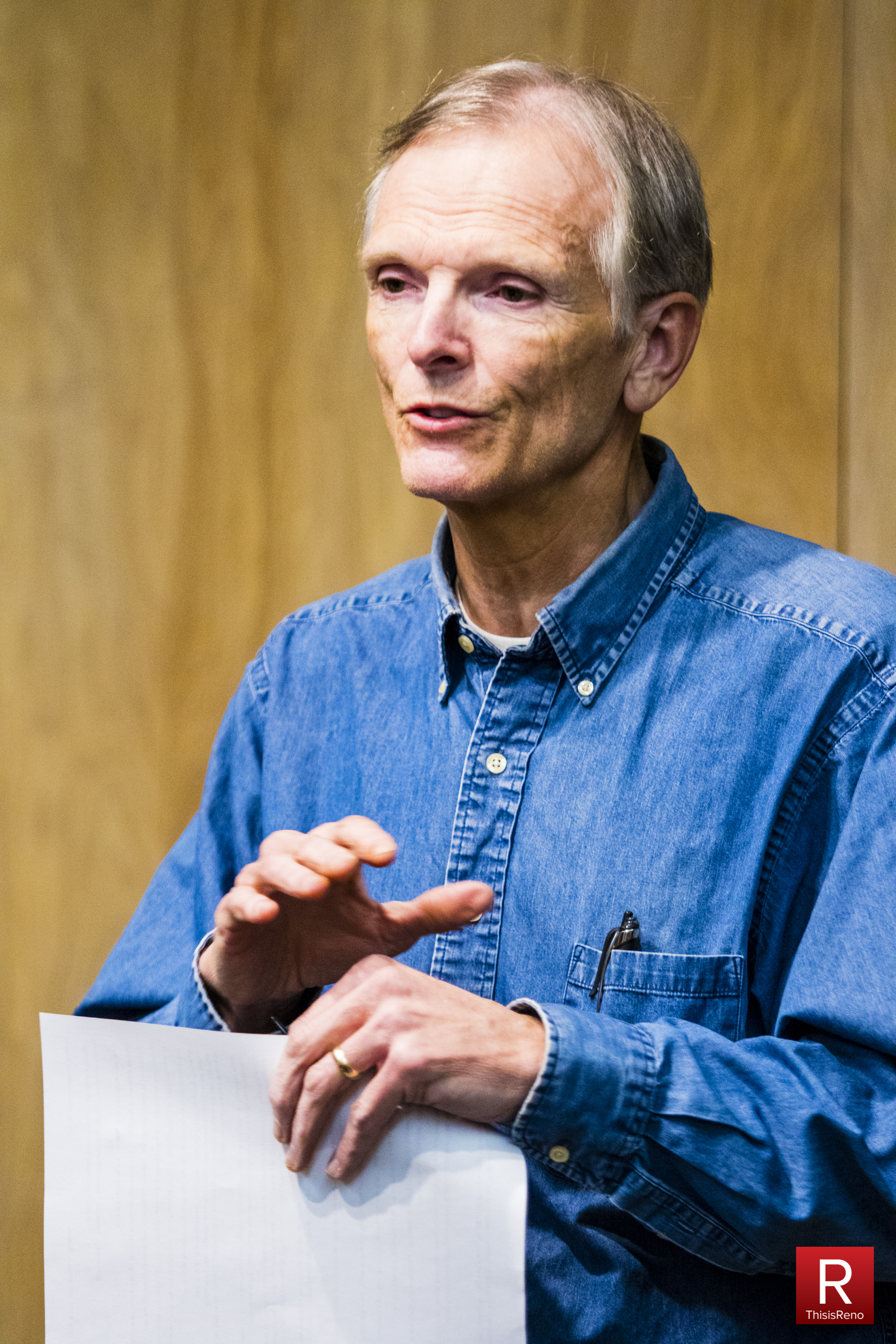 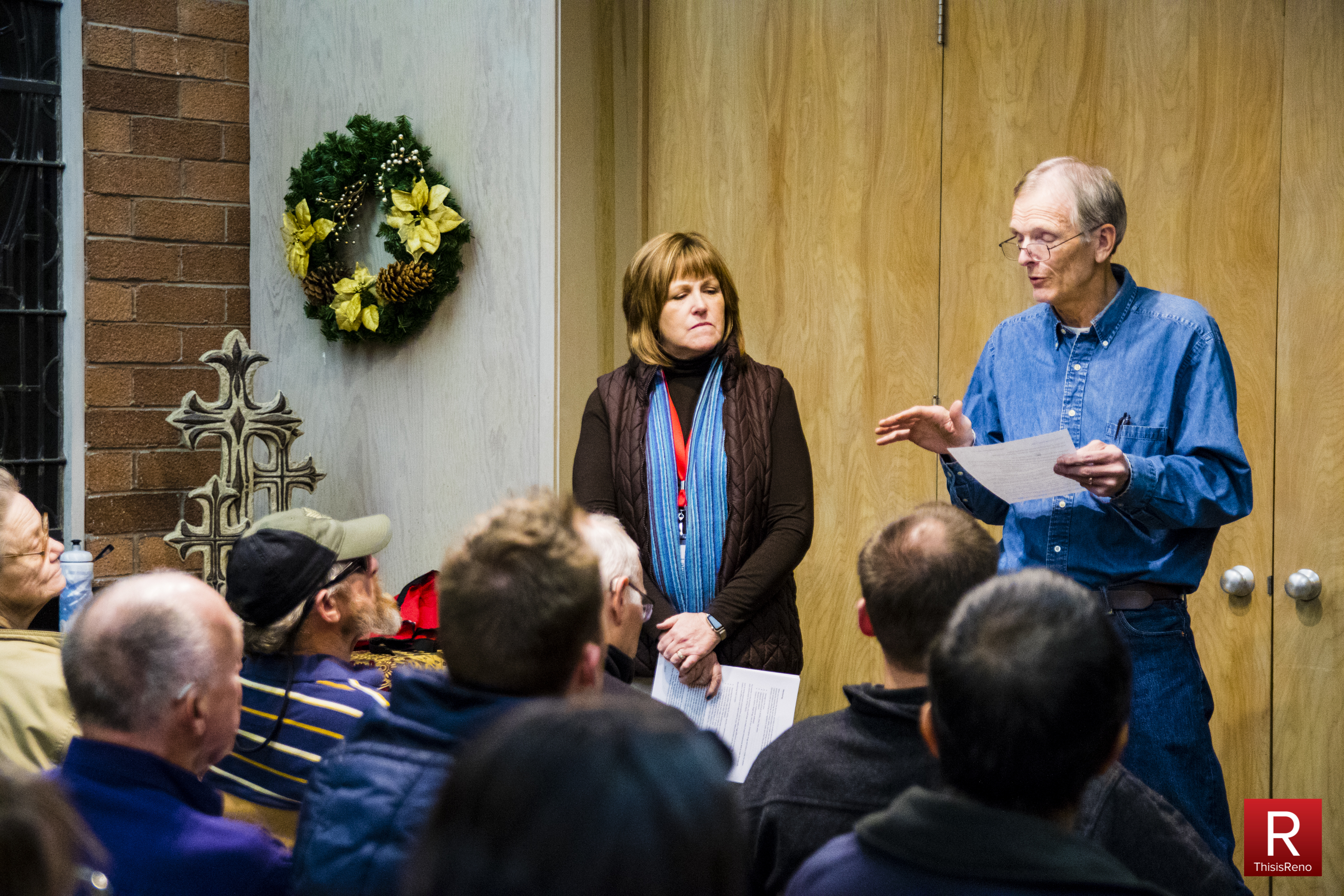 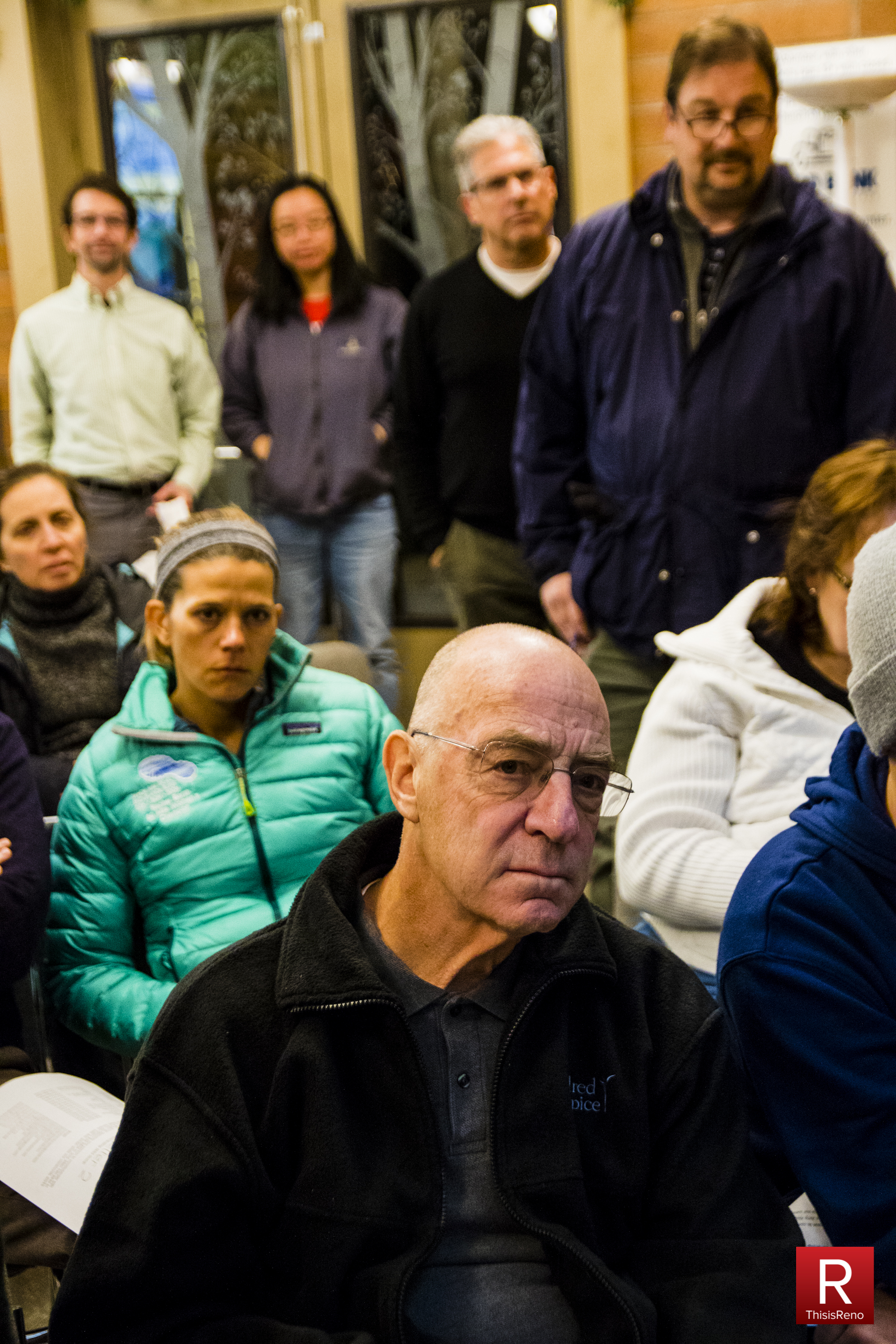 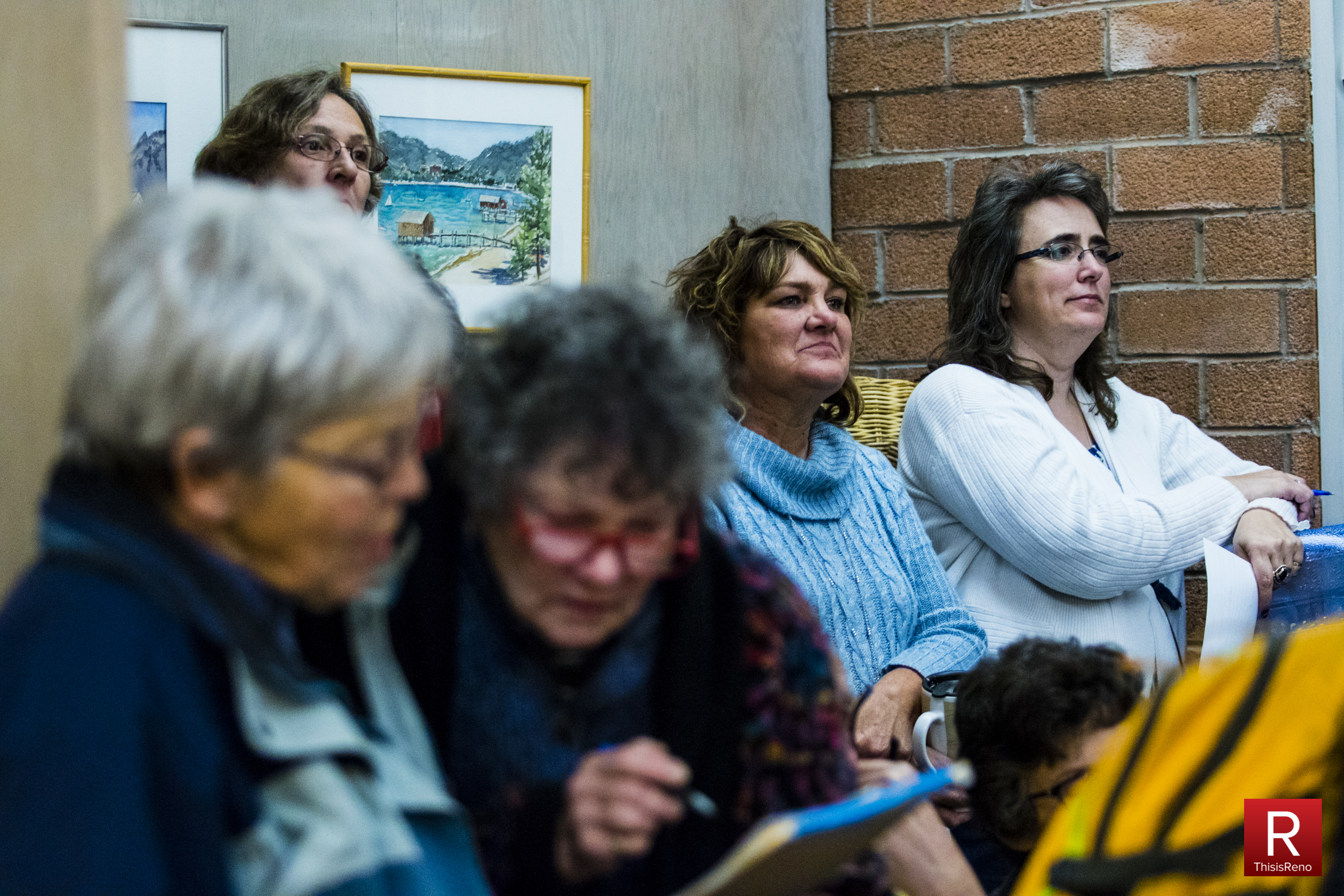 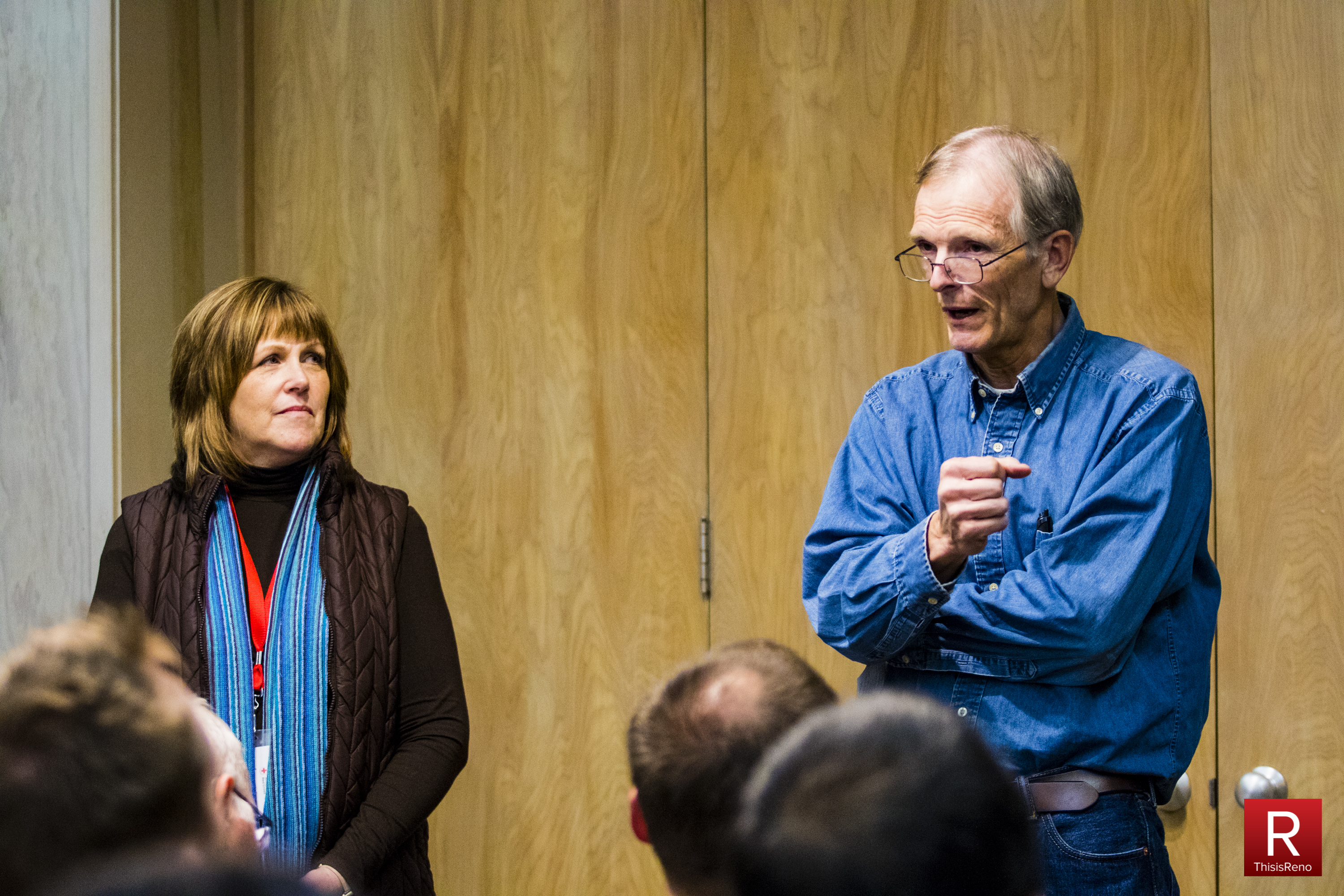 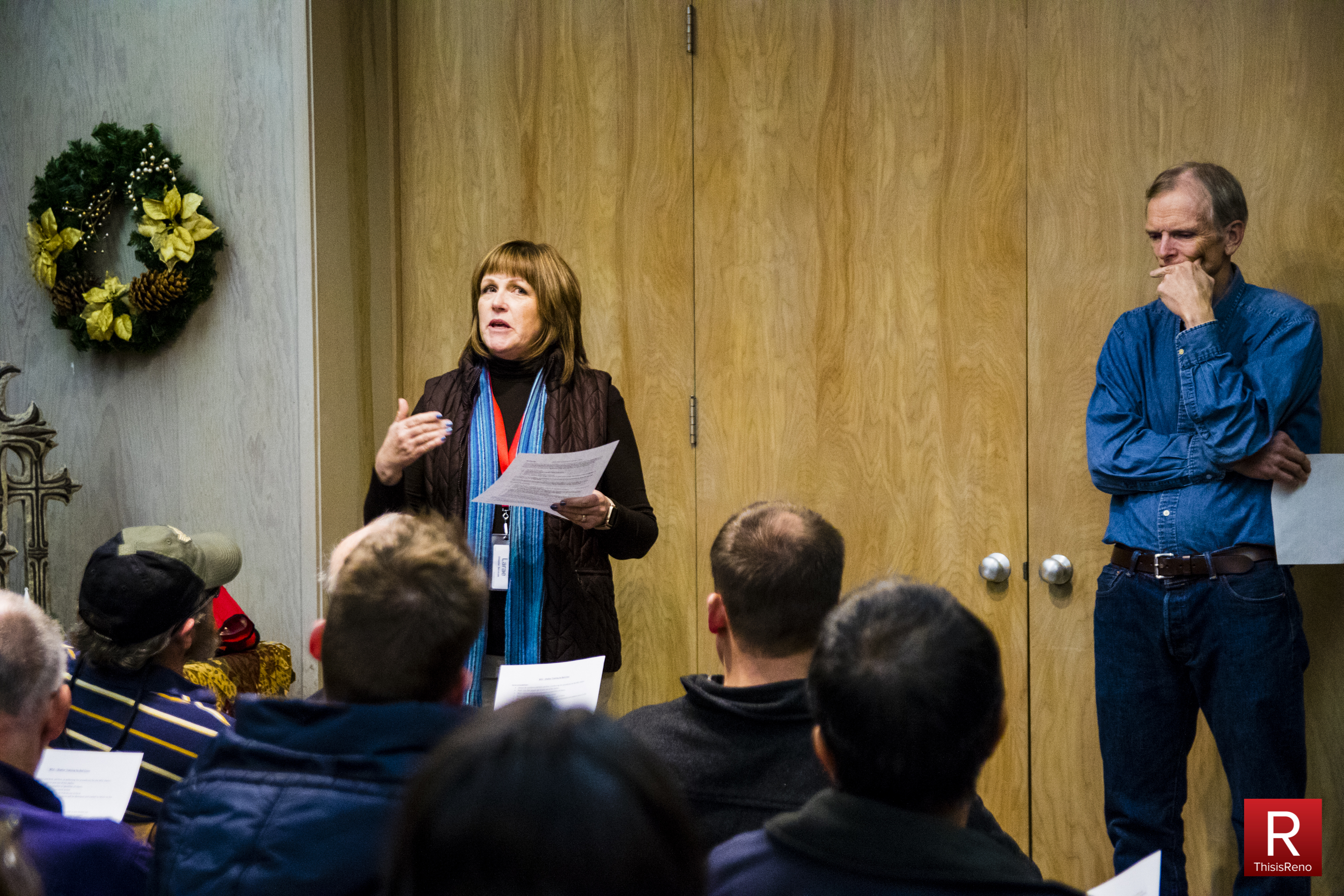 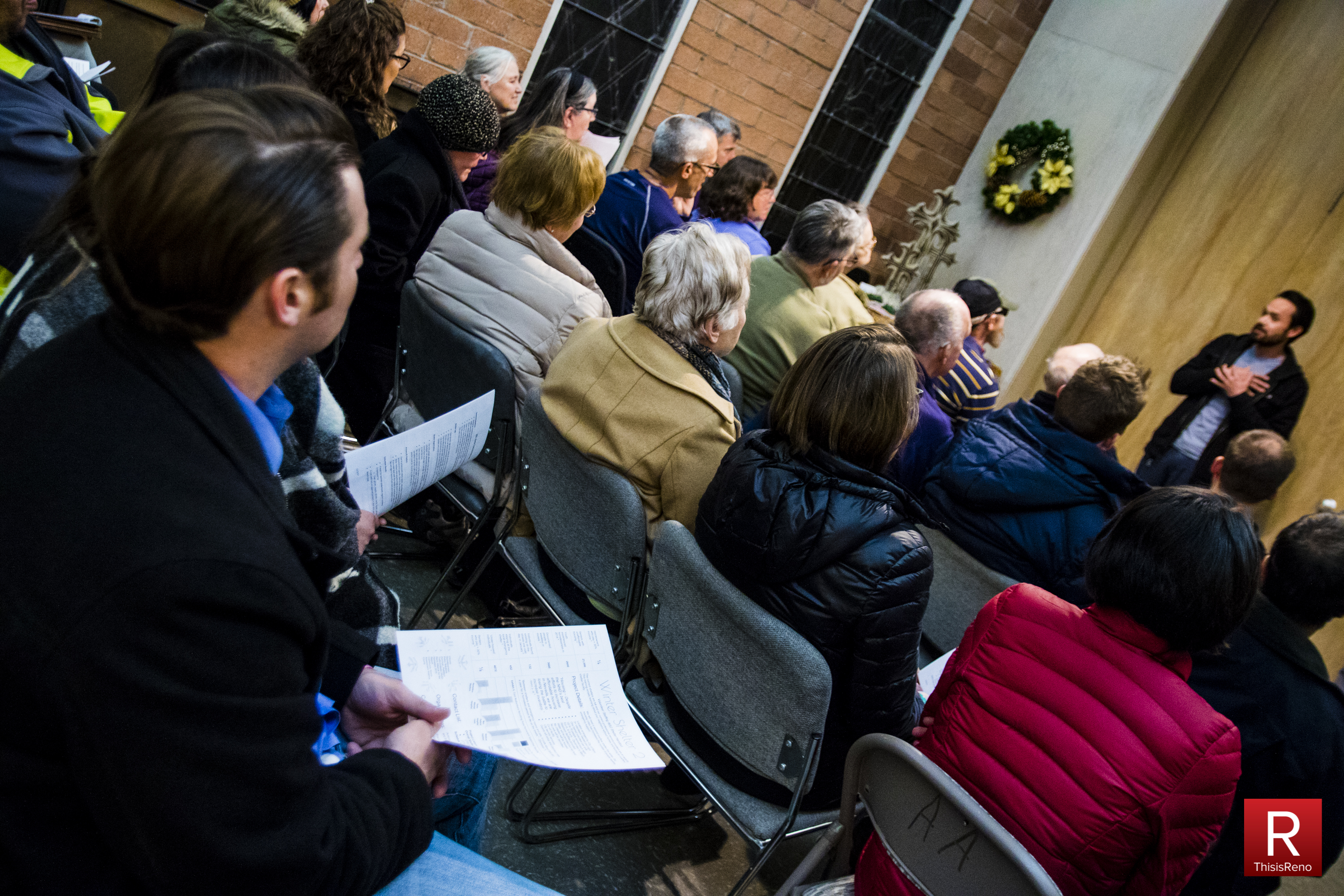 Tuesday night Dec. 5 dozens of community members met in the First Congregational Church of Reno for emergency winter shelter training. The event was hosted by Acting in Community Together in Organizing Northern Nevada (ACTIONN), Reno Initiative for Shelter and Equality (RISE), and the American Red Cross.

The number of trainees attending swelled to more than 70 with people spilling out of the main room and into the entrance of the church.

Ben Castro, board president of RISE, started the evening by describing the need for volunteers. With icy winter temperatures already occurring, the Reno homeless shelter and overflow shelter have reached capacity. A heated and lighted tent has been erected near the main homeless shelter as an emergency winter shelter. The City of Reno has asked for volunteers to manage operation of the tent during its nighttime use. 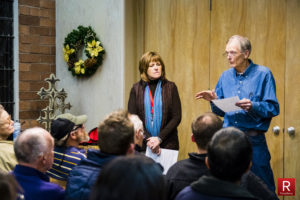 LaRae Wilson, an American Red Cross volunteer,  and Dan Jacobsen reviewed the duties for volunteers at the emergency winter shelter, which include logging people in and out of the tent and monitoring the tent for safety and sanitary issues. Organizers estimate three to four volunteers are required for each night the tent is open.

Both Wilson and Jacobsen spoke openly about the potential for many of the houseless people using the tent shelter to have some sort of mental illness and that the ability to deescalate conflicts would be an important skill for volunteers to possess. To illustrate the point, Castro suggested volunteers imagine sheltering victims of the recent California fires who have lost their homes, all of their possessions, and possibly family members as well. Then, he added, imagine the same people have been experiencing that level of trauma repeatedly year after year.

While disruptive individuals were to be expected, Castro, Wilson, and Jacobsen agreed that the majority of people using the tent would be simply looking for a place to sleep.

Privacy of shelter users was also reviewed. Volunteers logging people in and out of the tent won’t share information or names of who is or has been in the tent with anyone, including law enforcement, unless under extreme circumstance.

While community volunteers are managing night operations at the tent, all other responsibilities of the shelter will be handled by staff at the city’s main shelter.

Heated buildings at Cares Campus opening as temperatures dip below...

City, County must work together for warming center and emergency...

Organizations work to keep people housed after end of eviction...