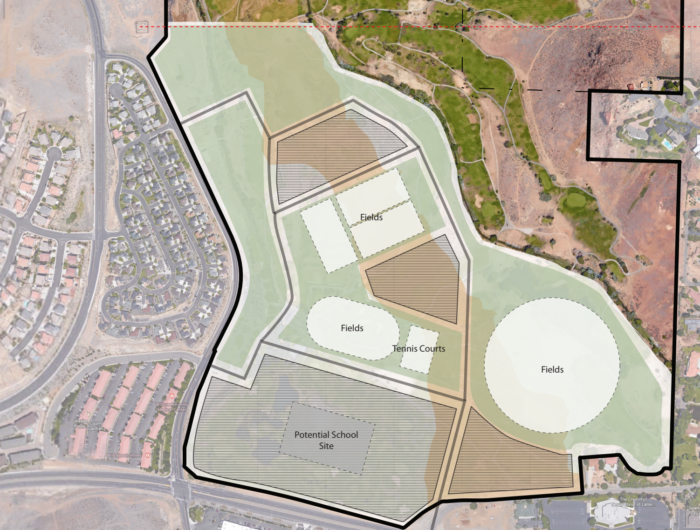 One of seven proposed designs for Wildcreek High School.

Washoe County School District trustees voted Tuesday in favor of entering into negotiations with the county to buy 75 acres of land at the Wildcreek Golf Course to build a high school expected to open in fall 2021.

A due diligence report from Reno surveying and engineering firm Wood Rodgers showed Wildcreek would be a suitable location for a high school.

The school district spent about $200,000 on the report. This included surveys, traffic studies, environmental assessments, and addressing issues with the Federal Aviation Administration, among other things.

“The due diligence report does not indicate that the site has any constraints that would preclude the construction of a high school,” said Wood Rodgers principal Andrew Durling. “The site provides multiple layout options to provide for a high school, recreational and public amenities, and open space opportunities.”

The board also agreed to adopt proposed real estate terms to include potential land, water rights, and effluent water agreements.

Attorney Steven Bus speaks to members of the Save Wildcreek group at a meeting in July 2017.

Members of Save Wildcreek showed up with handheld signs and voiced opposition. Some suggested expanding Spanish Springs High School or building elsewhere, such as Sun Valley, noting that about half the students attending the new school would be from Sun Valley.

“Nowhere in this due diligence report does it say Wildcreek is the ideal location,” said Darla Lee of Sparks. “It seems to me it could be built anywhere. We’re still in the dark about how much this will cost.”

The 212-acre Wildcreek public course at 3500 Sullivan Lane in Sparks is currently run by the Reno-Sparks Convention and Visitors Authority and owned by Washoe County. It has an 18-hole, par-72 course and a 9-hole, par-27 course on site and is operating at a loss of $270,000 annually.

“If Wildcreek closes, it would greatly impact our program,” Dewar said.

The 2,500-seat school at Wildcreek would replace Hug High School, which was built in the late 1960s and serves about 1,450 students. Plans are to close Hug at the end of the 2020-21 school year and send most of its students to the new school at Wildcreek, located almost two miles to the east. It would also draw from other high schools in Sparks. Hug would then reopen as a career and technical academy in fall 2022.

The preliminary appraisal done by Johnson Perkins Griffin Real Estate Appraisers and Consultants came in between $1.5 million and $1.875 million for 75 acres. The $375,000 range would depend on which part of the property the district purchased.

The cost to build the new high school hasn’t been determined because the school hasn’t been designed but district officials have estimated it’ll cost between $170 million and $190 million. Trustees said it’s up to the county to decide what it does with the remaining 137 acres it’ll retain and that golf could be configured in the mix.

District chief operations officer Pete Etchart said the Wildcreek location is ideal because it’s already zoned for public facilities, on an arterial road, and has utilities. Sites in Sun Valley have no arterial roads and might not be ideal for another decade, and Etchart said that’s too long to wait. 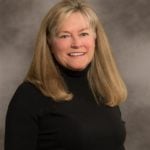 “Part of what we’re trying to solve in an equity issue,” Simon Holland said.

Tentative plans are for a land sale to close in summer 2018 and to break ground in December 2018.