Washoe County held an open house last weekend to discuss the upcoming winter and how it will impact flooded areas in the North Valleys.

The county has spent more than $2 million in the North Valleys since last winter. Some are still not back in their homes that were flooded during the winter storms. 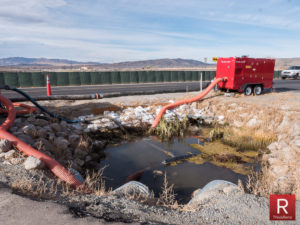 Swan Lake has only dropped 3 feet from its high point last winter. North Valleys lakes have no outlet, and evaporation is what is reducing the water level.

“We still have some homes that people aren’t able to go back to because water is impeding going to the house,” Solaro said. “There is one home that still has water in it.”

Some residents are still displaced from their homes and funding for living assistance will end by Jan. 1, 2018. Solaro said the county is providing assistance for those residents.

“We’re here to take care of our citizens,” he added.

Residents that showed up the county event, many wearing black in solidarity with flood victims, carried signs that read, “We’re tired of all the water.”

“We don’t need flood awareness — we’re flooded,” she said. ” We’re still flooded from last January. Stop the building until (this problem) is fixed.

Solaro disputed this notion, however, and said that the amount of water that hit the North Valleys was simply unprecedented.

Watch the video below for more information.