Caving is a short person’s game.

I learned this on a recent trip to Lava Beds National Monument in Tulelake, California, about 216 miles from Reno. It’s possible to do this as a day trip — a really long day trip with about eight hours of drive time — but it might be more fun to overnight in Klamath Falls, Oregon, about 47 miles north of Lava Beds, and head back the next day.

Lava Beds is open year-round; the visitors’ center is open from 9 a.m. to 4:30 p.m. in November. During winter, snow can temporarily close park roads until they are plowed. 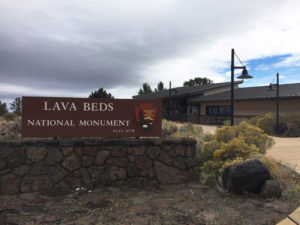 The centerpiece of Lava Beds is Cave Loop Road, a 2-mile, one-way drive with entrances to 16 caves (this is a fraction of Lava Beds’ 700-plus caves, which technically are lava tubes). The visitors’ center is at the beginning of the loop road: check-in is required. It’s here where you pay the $15-per-vehicle, seven-day entry fee. You also can watch a short video explaining the area’s geology and borrow a flashlight for use during cave exploration if, like me and my husband, you show up completely unprepared.

(Field note: the Flashlight app on my phone was helpful — not only did it provide light, it has a compass. That helped us navigate Golden Dome Cave, which twists like a figure eight.)

At the visitors’ center, rangers also will ask about your recent caving experience. They are trying to prevent the spread of white-nose syndrome, deadly to bats, which can be transferred from cave to cave. Yes — there are bats in the caves. Some things just go hand-in-hand.

Caving is a short person’s game 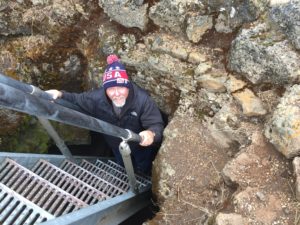 We went into four caves along the loop drive: Golden Domes, Hopkins Chocolate, Catacombs and Sunshine. All the caves on the loop drive are rated in three categories: least challenging, moderately challenging, and most challenging. Catacombs was the toughest we did — in places the cave is about 3 feet high (we didn’t attempt the 12-inch-high parts). It wasn’t too bad, but I am short — about 5’1”. Stooping down to clear a 3-foot-tall passage is easy. But my 6-foot-tall husband had to either crawl or fold himself into an awkward crouch that precipitated a scary gait reminiscent of Gollum in “Lord of the Rings.”

Sometimes, the scariest thing in a cave is not the bats.

Lava Beds has caves to explore outside of the loop road, as well as a handful of trails to hike, an area where you can see petroglyphs, and the Tule Lake Segregation Center), among other features. We chose to stop at Captain Jack’s Stronghold. This is where Modoc leader Kientpoos — known among settlers as Captain Jack — led a group of about 160 people in a final standoff against U.S. Army forces. It was 1873, and the United States wanted the Modocs on a reservation. Although this group was vastly outnumbered, it held off the Army for several months. 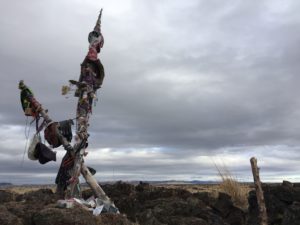 Here, there are two loop trails (one half-mile route; one 1.5-mile path) through natural rock barriers. It’s easy to see how the terrain provided strategic cover.

Like many places where tragic events occurred, Captain Jack’s Stronghold has a makeshift memorial: two wooden poles in the shape of an “x” covered with ribbons, bags, a baseball cap, what appeared to be Chinese paper money, a small portrait of Jimi Hendrix, and other offerings.

Klamath Falls, Oregon, is about 47 miles north of Lava Beds, and an easy place to find lodging. We ended up at the Running Y Ranch Resort (very nice), but there are other options, including the Cerulean Hotel in downtown Klamath Falls. This boutique hotel is a Running Y property and complimentary shuttle service to the Running Y Resort is offered.

While in Klamath Falls, sample the local suds at Klamath Basin Brewing Company. The Rebellion Red Ale and the Hard Hat Hefeweizen tasted pretty good after a day of exploring.