Steve Hytner of ‘Seinfeld’, Frank Hannon of Tesla (the band) & Reno Mayor TOP THE LIST OF CELEBRITY PRESENTERS AT THE 2017 GALA THIS THURSDAY NIGHT, NOV. 2

The Fans Of Reno Tahoe Entertainers, or FORTE, announces the list of Celebrity Presenters who will bestow the best of local performing artist nominees the FORTE Award in 37 categories of Dance, Music, Theatre, Comedy & Magic. The complete list is attached. Logon to forteawards.com, for more details.

“Our first-year event was a smashing success for the community and year two is mirroring the trends we see in the growth and development of our local performing arts community,” says Steve Funk, Forte Awards communications chairperson. “I attribute the increases to better awareness, a vibrant community of artists creating and performing and some new ways the general public can support those artists via the FORTE website.” 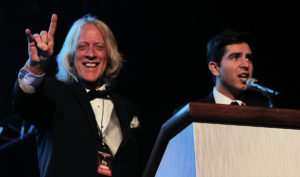 Frank Hannon, lead guitarist for the rock band Tesla, played small Reno clubs many times as a young artist in the band City Kids, and became well known here before the Kids changed their name and became one of the biggest grossing rock bands of the 80s, still touring today. In addition to his duties as a presenter, Frank will perform at the FORTE Awards with his own band and special guest, legendary local guitarist Greg Golden. The FORTE Awards Gala will feature performances from all five of the performing arts disciplines.

Internationally known comedian Steve Hytner is a northern Nevada resident who has made his name in entertainment, including his appearances on the “Seinfeld” show as Jerry’s sycophantic friend, the character Kenny Bania. Steve agreed to take part in this year’s award ceremony to help bring attention to the high quality of local entertainment in our region and to support the FORTE Awards give to local non-profits for pets, vets and hungry neighbors via The Veterans Resource Center in Reno, the Nevada Humane Society and the Food Bank of Northern Nevada.

Another first this year is the performance by the FORTE All-Star Orchestra, made up of the 2016 awardees in the Individual Music categories. They include Tyler Stafford (3 x award winning singer/songwriter), Monique Jade (2016 FORTE for Female Vocal), 2016 Muiti-Instrumentalist Alan Griffith, Guitarist Jason King Roxas, Drummer Tony Savage, Bassist Gia Torcaso and Rick Metz, sitting in on sax for Rocky Tatarelli who is unavailable for the event this year.

This annual event began in 2016 and salutes the works of northern Nevada talents in Music, Theater, Dance, Comedy & Magic at a gala event every November. The inaugural event drew more than 1,200 attendees, and awarded Forte statuettes for excellence in 40 performing arts categories.