A New Twist on Tailgating at Wolf Pack Football Games 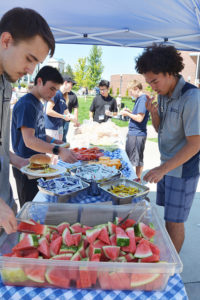 Fitness tailgates at UNR replace some of the more typical foods with healthier options, like watermelon. Photo: UNR

Tailgating with food before sporting events often consists of hot dogs, hamburgers, soda, beer, and chips with dip, among other things.

If bottled water and a veggie tray happen to be in the mix, they often take a backseat to the hearty main course, carbonated drinks, and starchy snacks.

But numerous organizations at the University of Nevada, Reno have come together to host an alternative—fitness tailgates—for students, faculty, and staff before home football games.

Activities are set up between the Joe Crowley Student Union and E.L. Wiegand Fitness Center and consist of obstacle courses, lawn games, and other activities. Various restaurants provide food, too.

The tailgates are in their first year and the idea was first floated by Student Life Services.

“The intent of the tailgates is to provide an alternative to students other than participating in high-risk activities before the football games and to promote our newly-opened E.L. Wiegand Fitness Center,” said Morgan Zuziak, programming and marketing coordinator at the Joe Crowley Student Union. “The hope is this will become a student tradition for many years to come.”

The tailgates have been well received by the campus community and have been instrumental in exposing students to healthy tailgating options, Zuziak said. Several hundred students have attended each tailgate put on this season, she said.

Great Full Gardens on Saturday is scheduled to provide wrap sandwiches, quinoa salads, and other menu items before Saturday’s game against Hawaii. Activities get underway at 4:30 p.m.

Port of Subs will work the fitness tailgate and the following home game against Air Force on Oct. 20.

Restaurants and vendors that work the tailgates are chosen based on what healthy options can be provided, Zuziak said. The committee working on the tailgates decided to use the food vendors in the student union, along with catering services on campus.