I was fortunate enough to be invited to the current featured show in the Eldorado Resort Casino’s Eldorado Theatre, “Adam Trent – The Next Generation of Magic.” Billed as an immersive entertainment extravaganza of magic, comedy, and music designed to entertain the entire family, it truly was.

Adam put on a fantastic 90-minute show of both close-up and not-so-close-up magic. He had a giant video screen behind him that displayed the close-up magic as his on-stage cameraman hovered over the action. 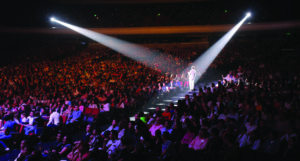 He also includes a lot of audience members in his various tricks and illusions. First up was a card trick where he included a gentleman named Dave from Australia and Reno’s own Oliver X. I was mildly involved in one trick where I simply held on to a knife that he used later in the trick to cut open a melon, from the center of which he magically made an audience member’s cell phone appear.

Telling you more about what his illusions involve would be like telling you the punch lines for jokes of a comedy show you should go see. Not gonna do it! The magic is in being there.

Suffice it to say this is a great family show that people of all ages will enjoy. Adam even brought a young man of around 10 years old up on stage to help out once.

Ticket prices are very reasonable and there’s not a bad seat in the house. After the show Adam is out front to meet and greet and take pictures with anyone who would like to say hello.

Adam Trent’s show will be in the Eldorado Theatre until Oct. 22, playing Wednesday through Sunday with two shows daily on Saturdays and Sundays. More information can be found at: https://www.eldoradoreno.com/event/shows/adam-trent-next-generation-magic