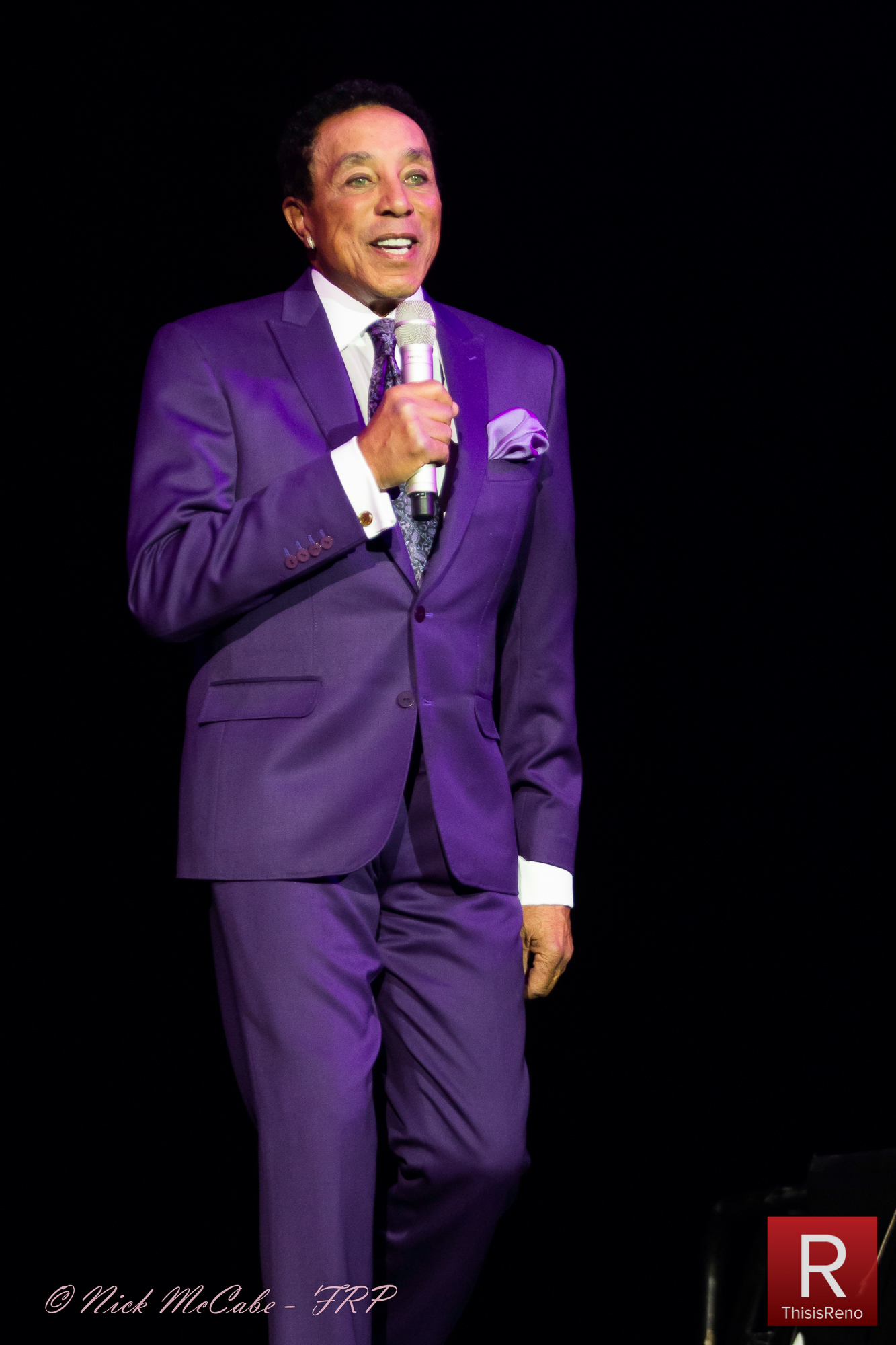 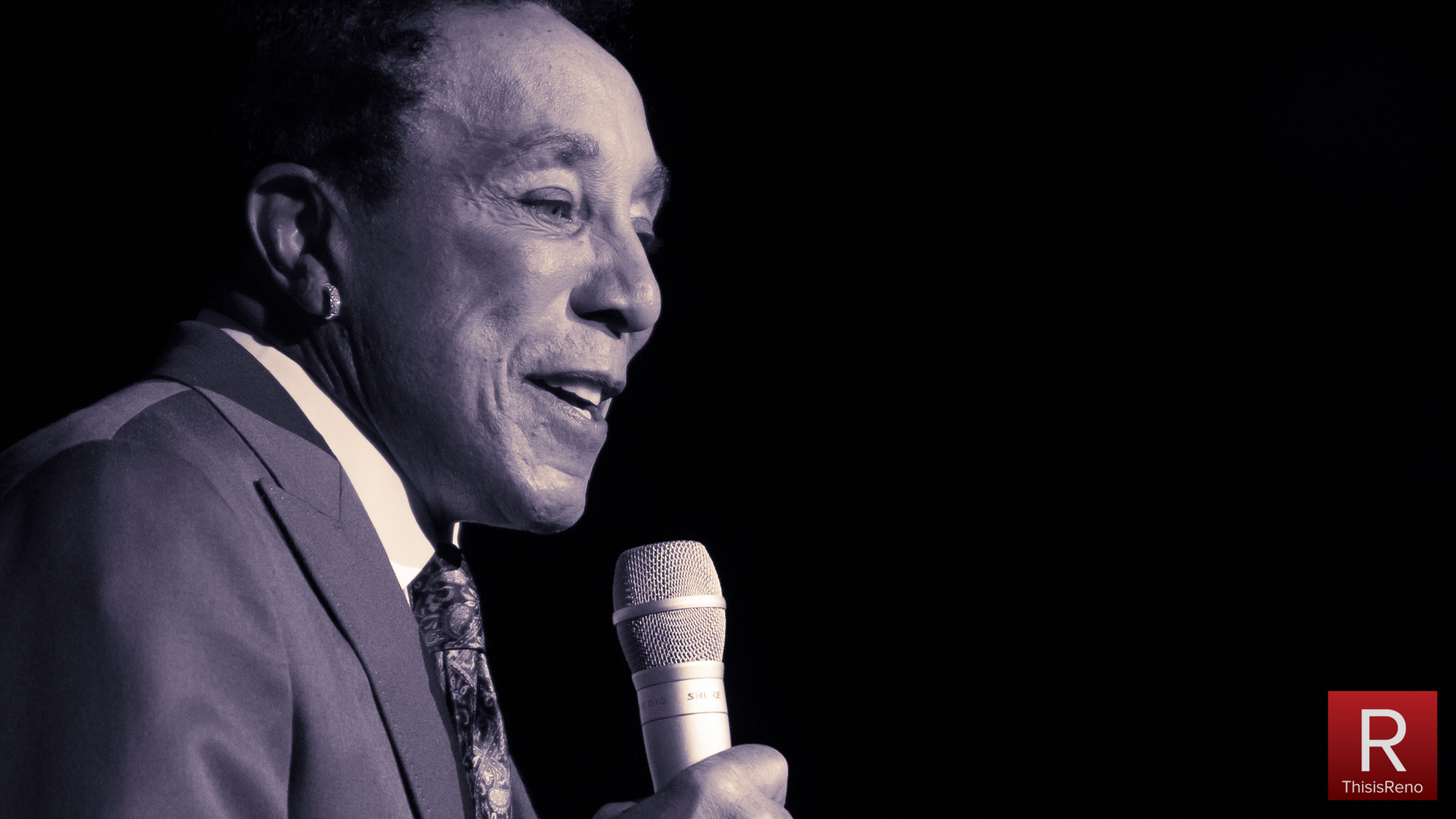 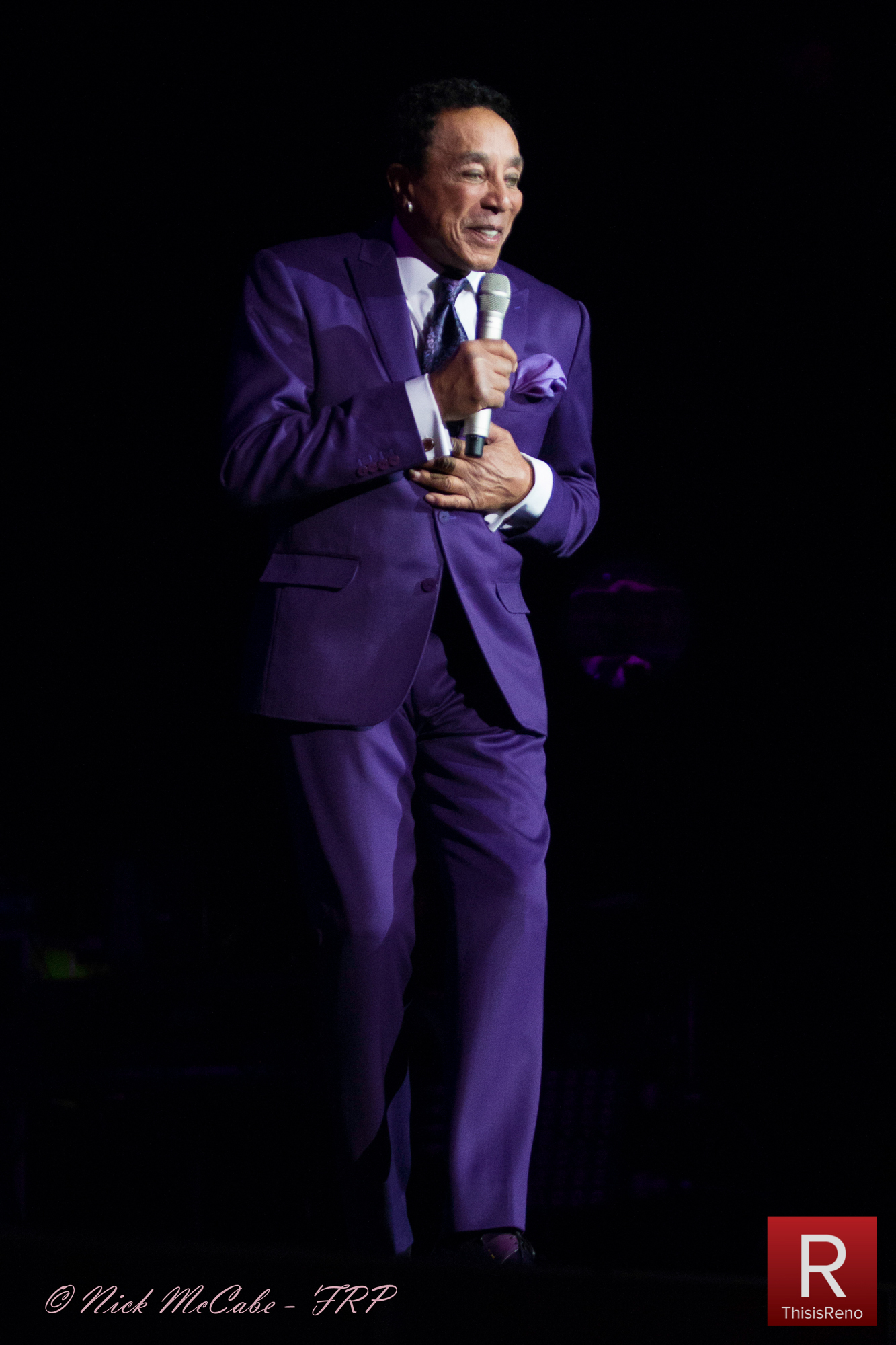 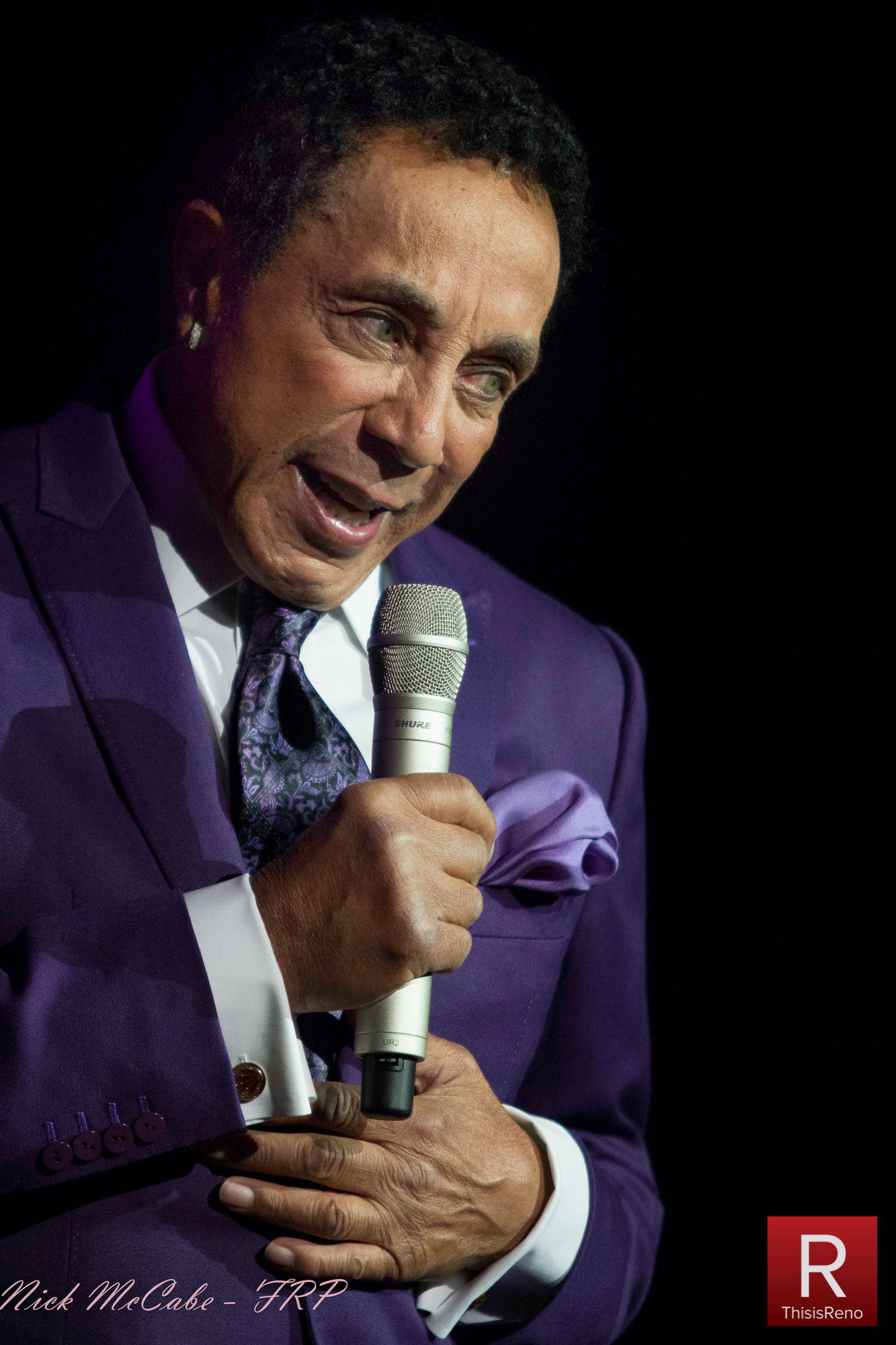 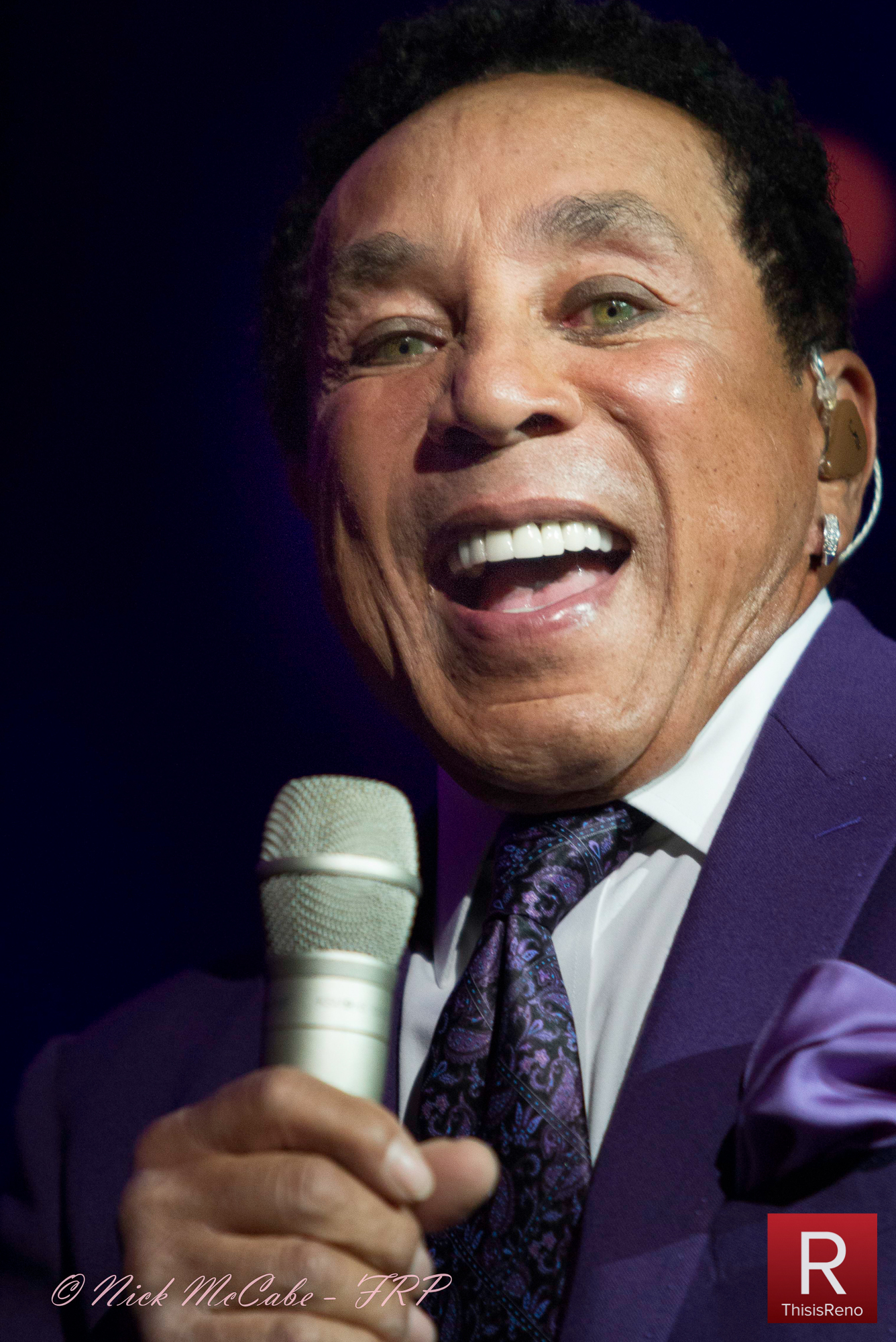 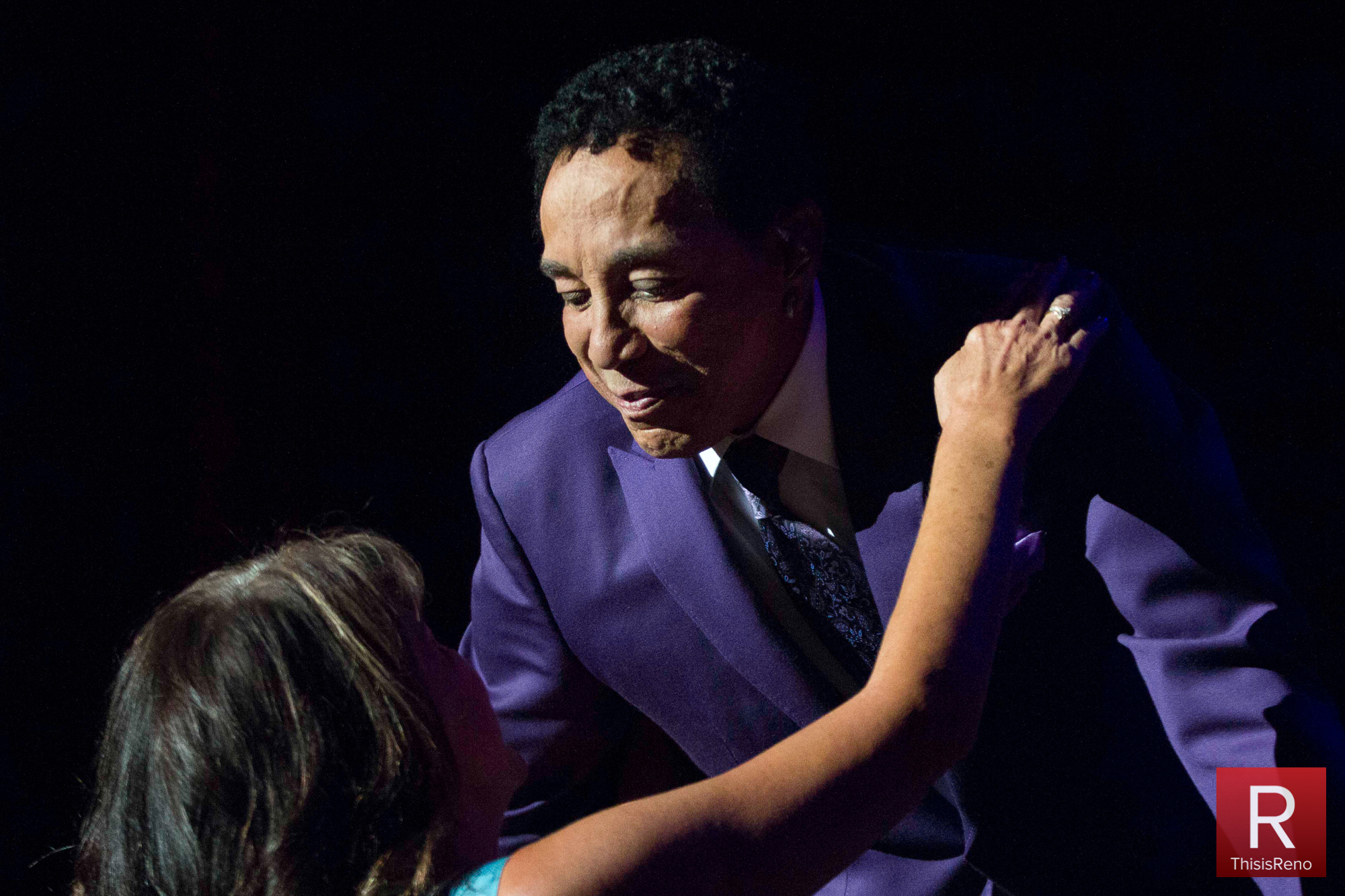 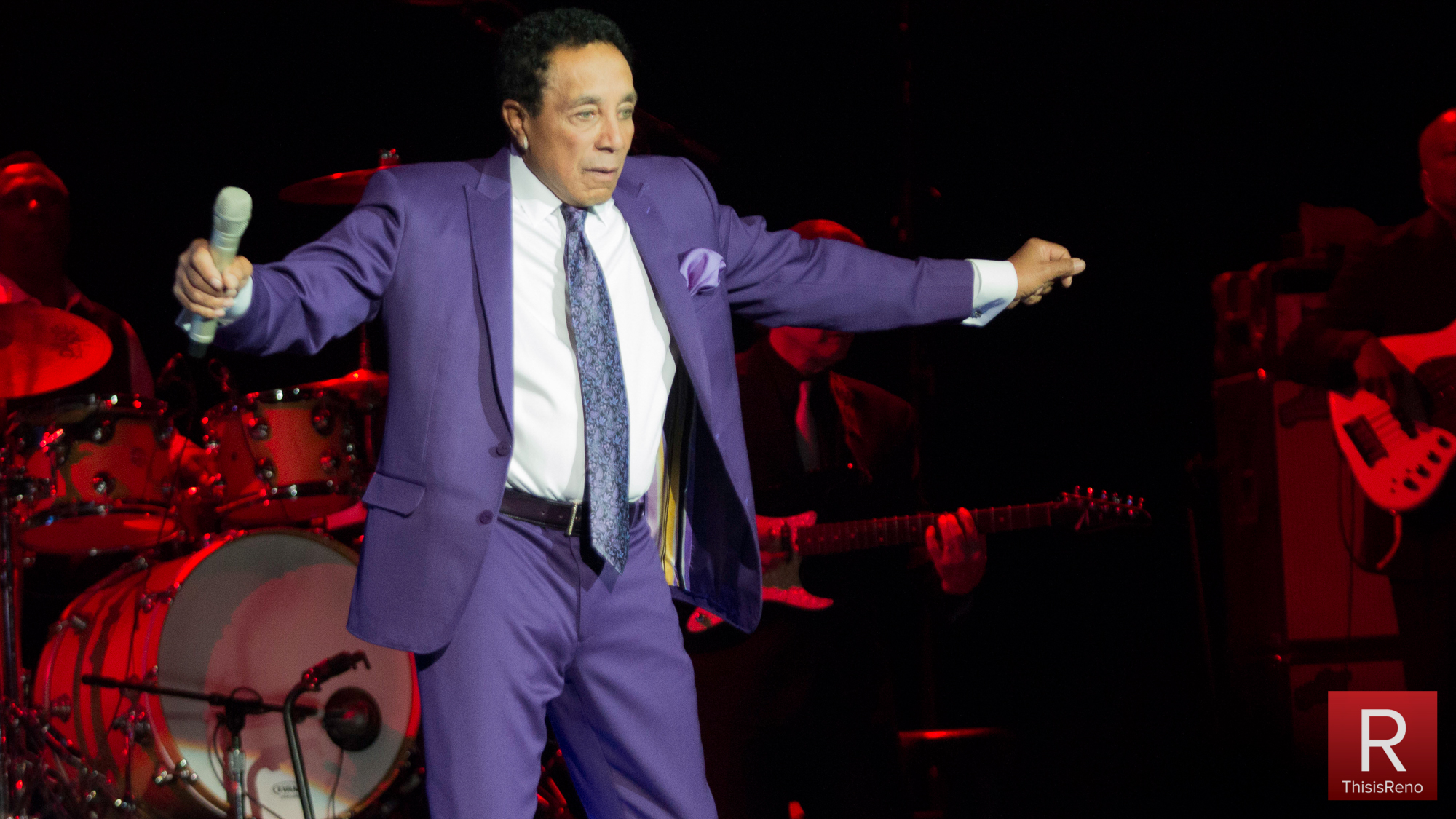 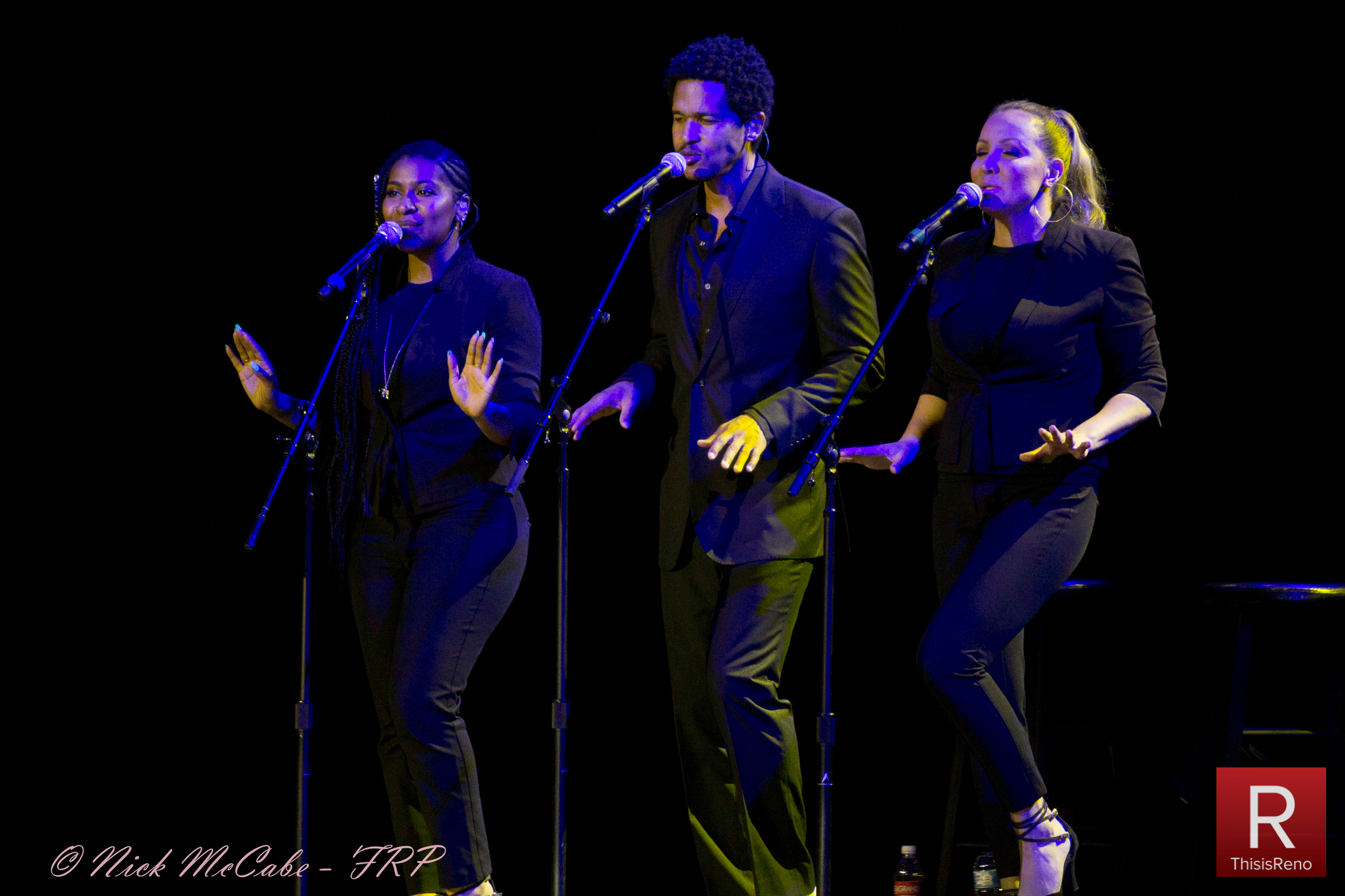 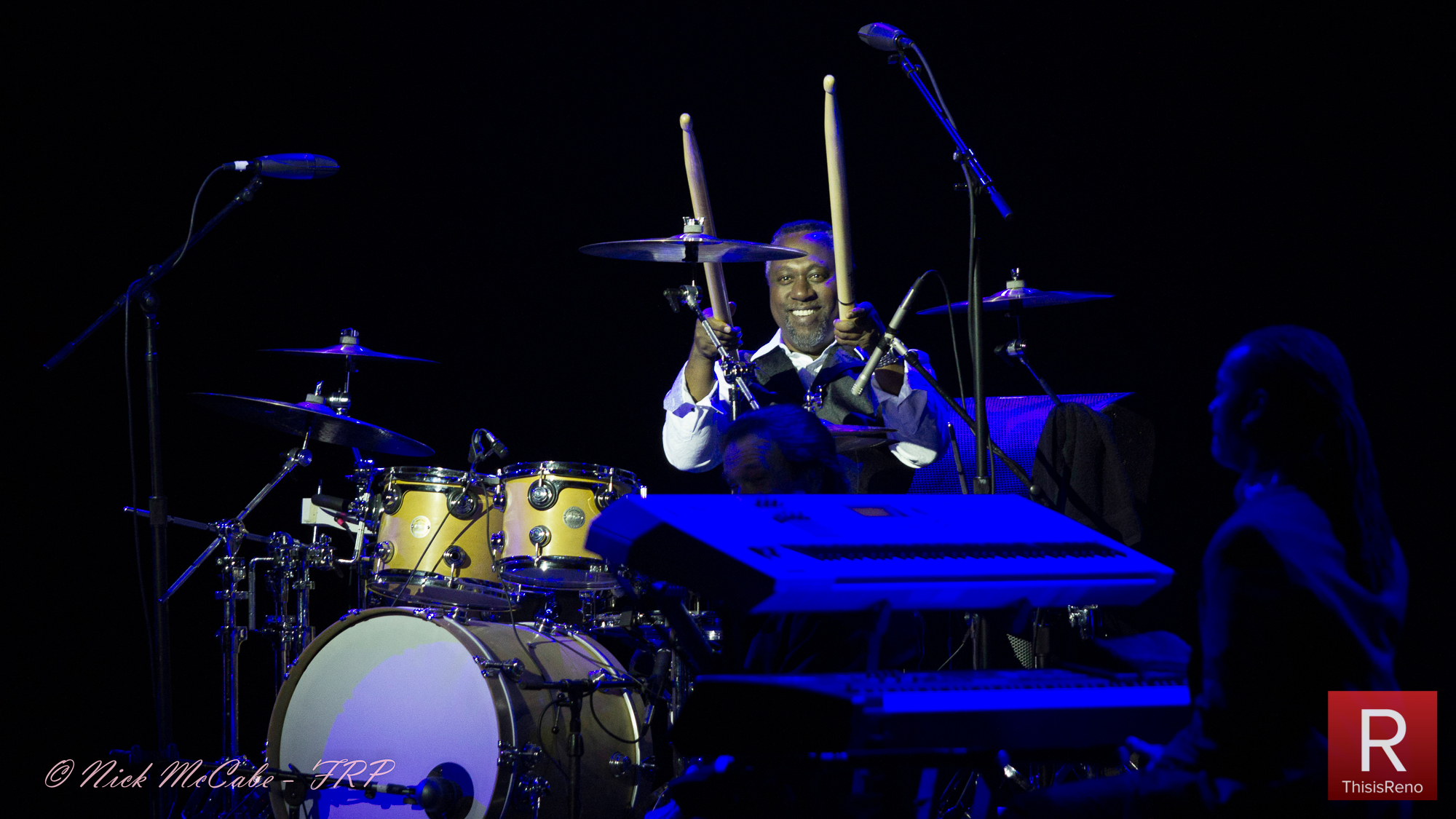 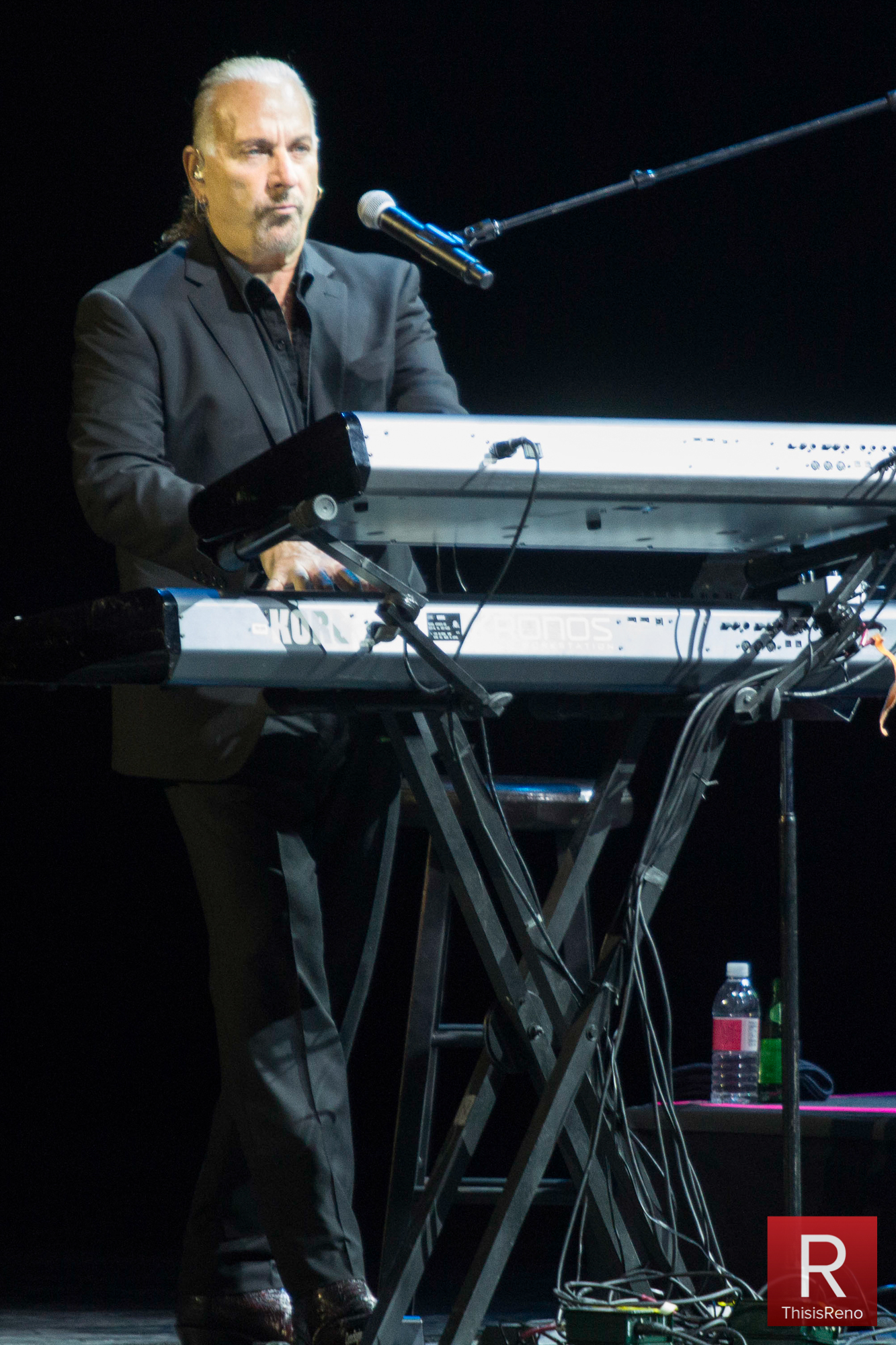 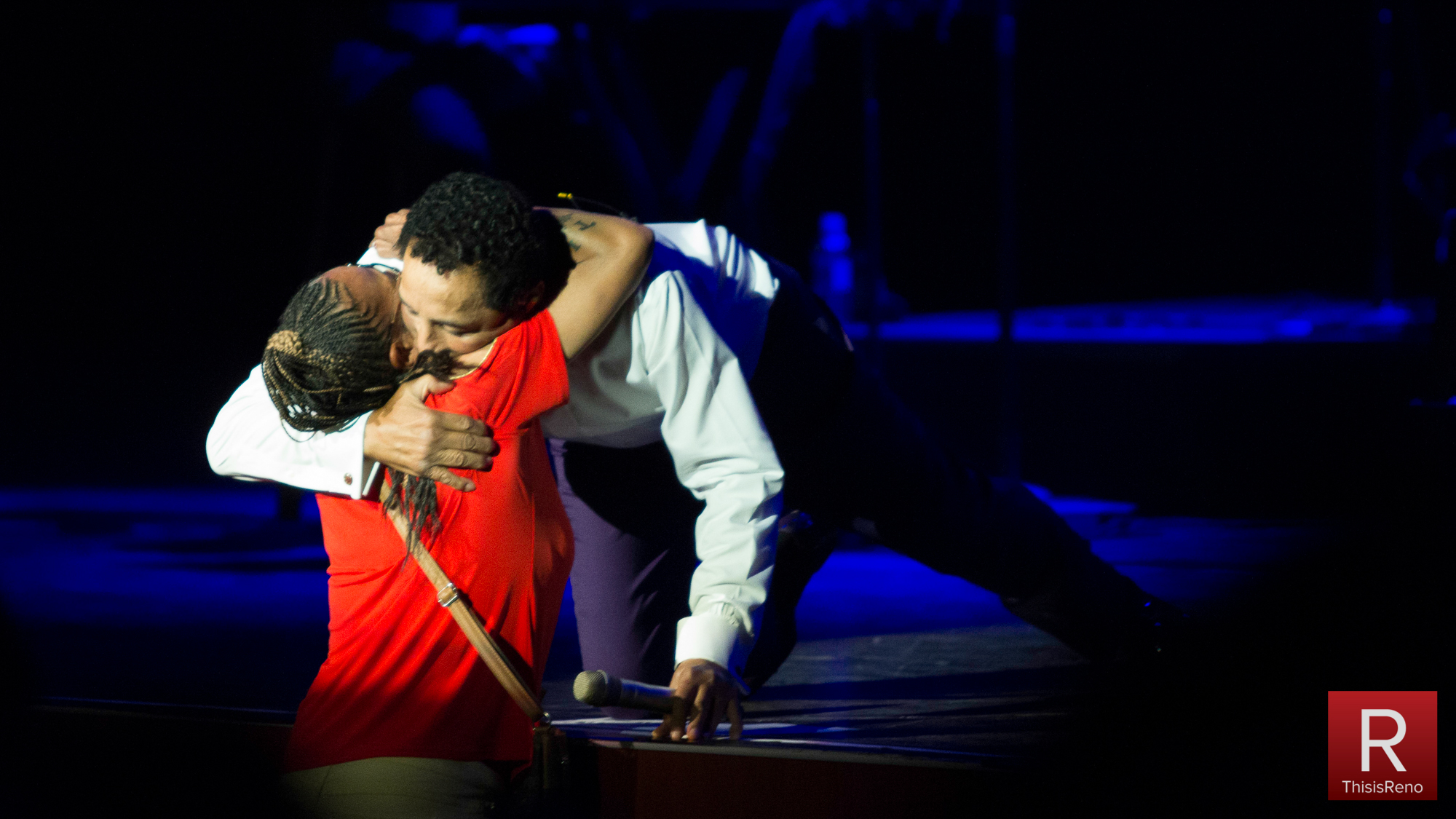 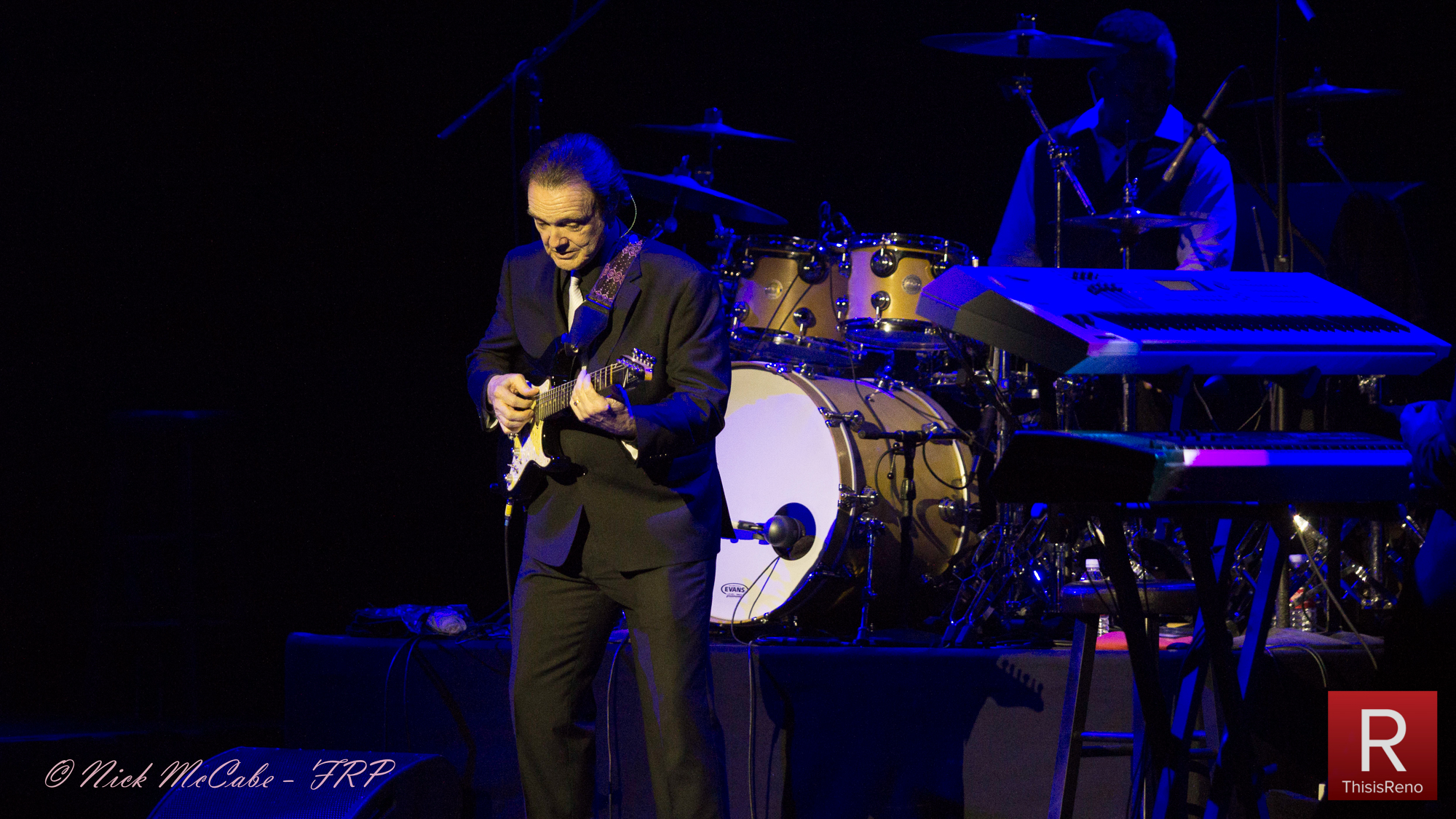 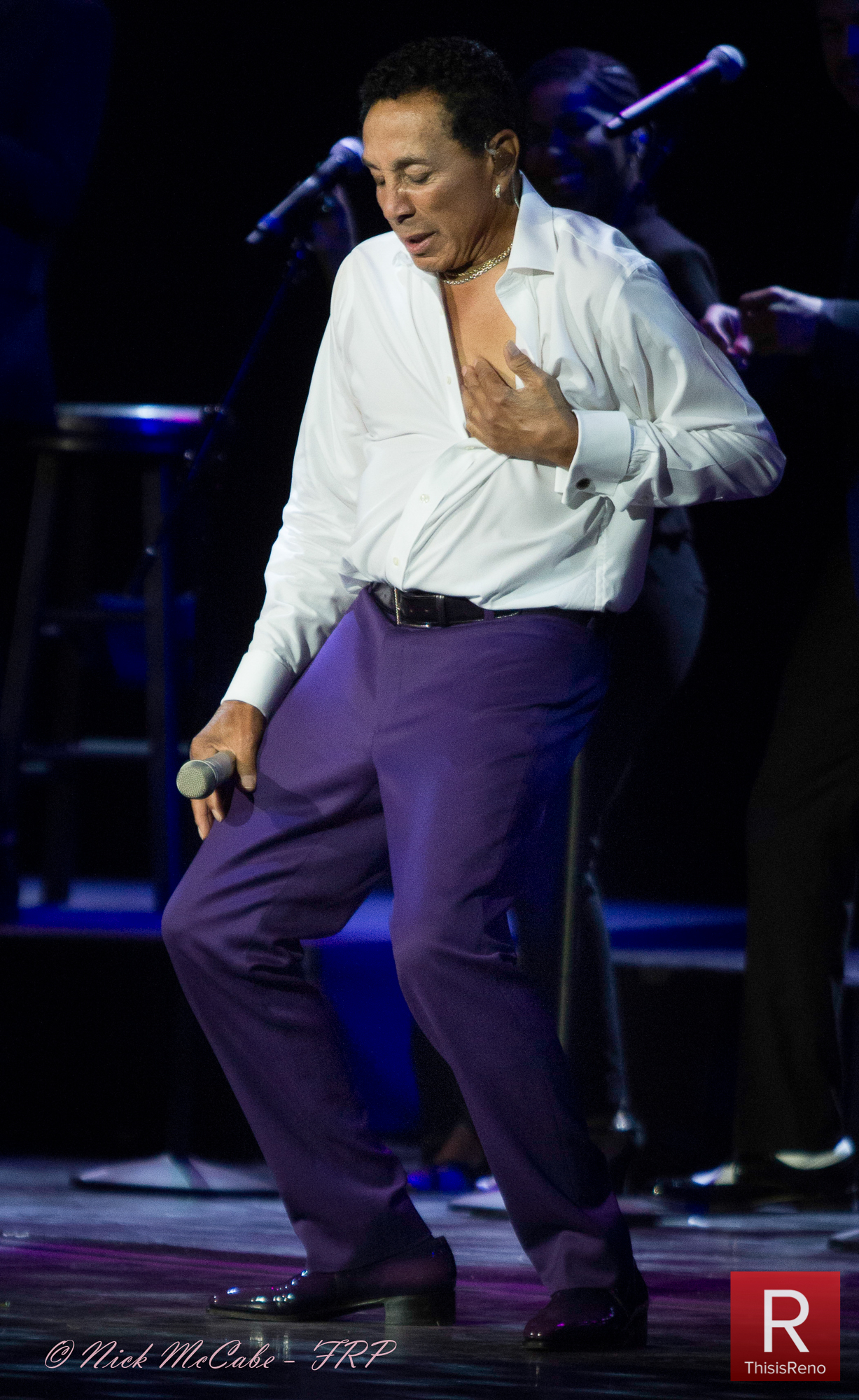 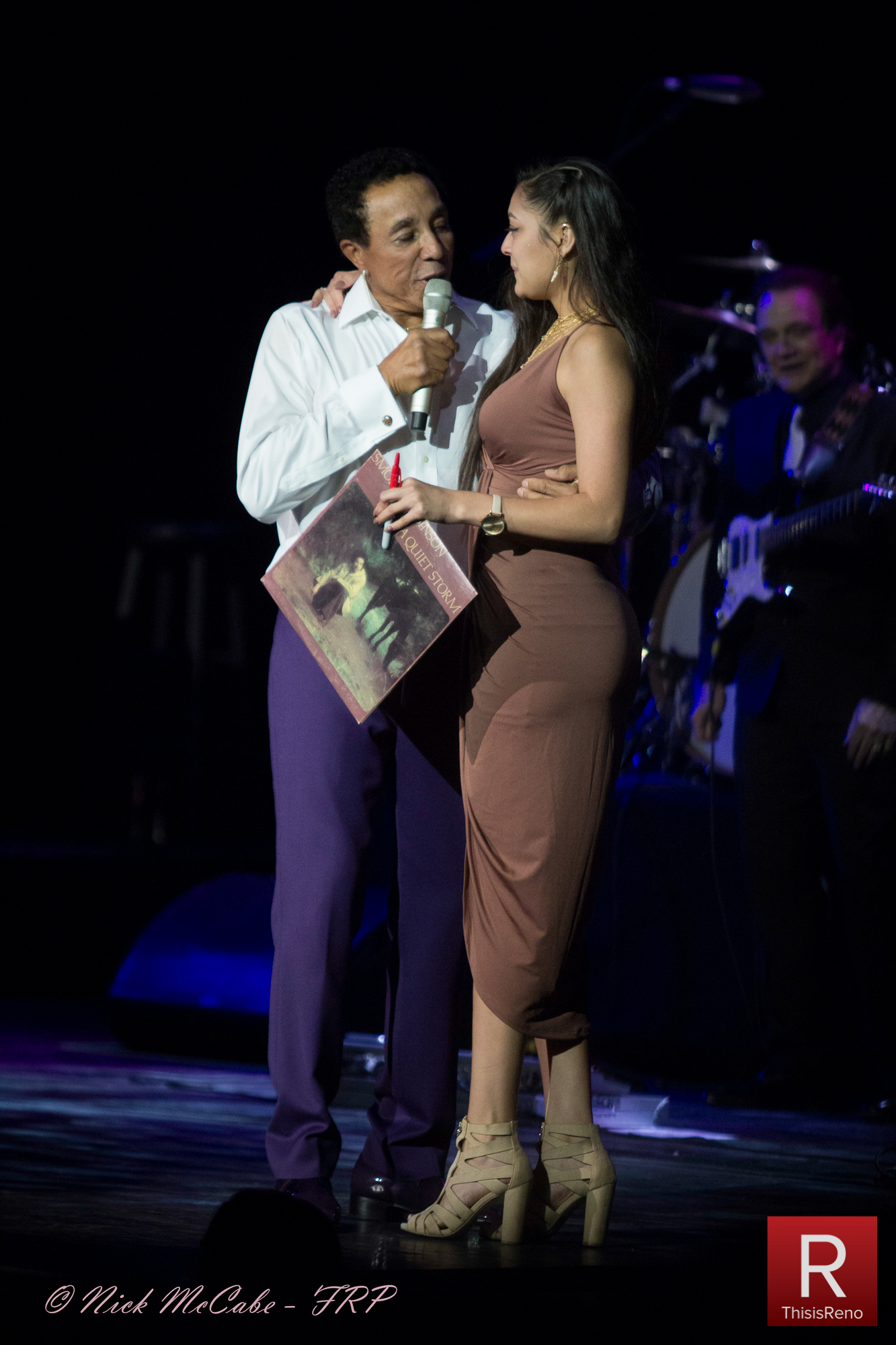 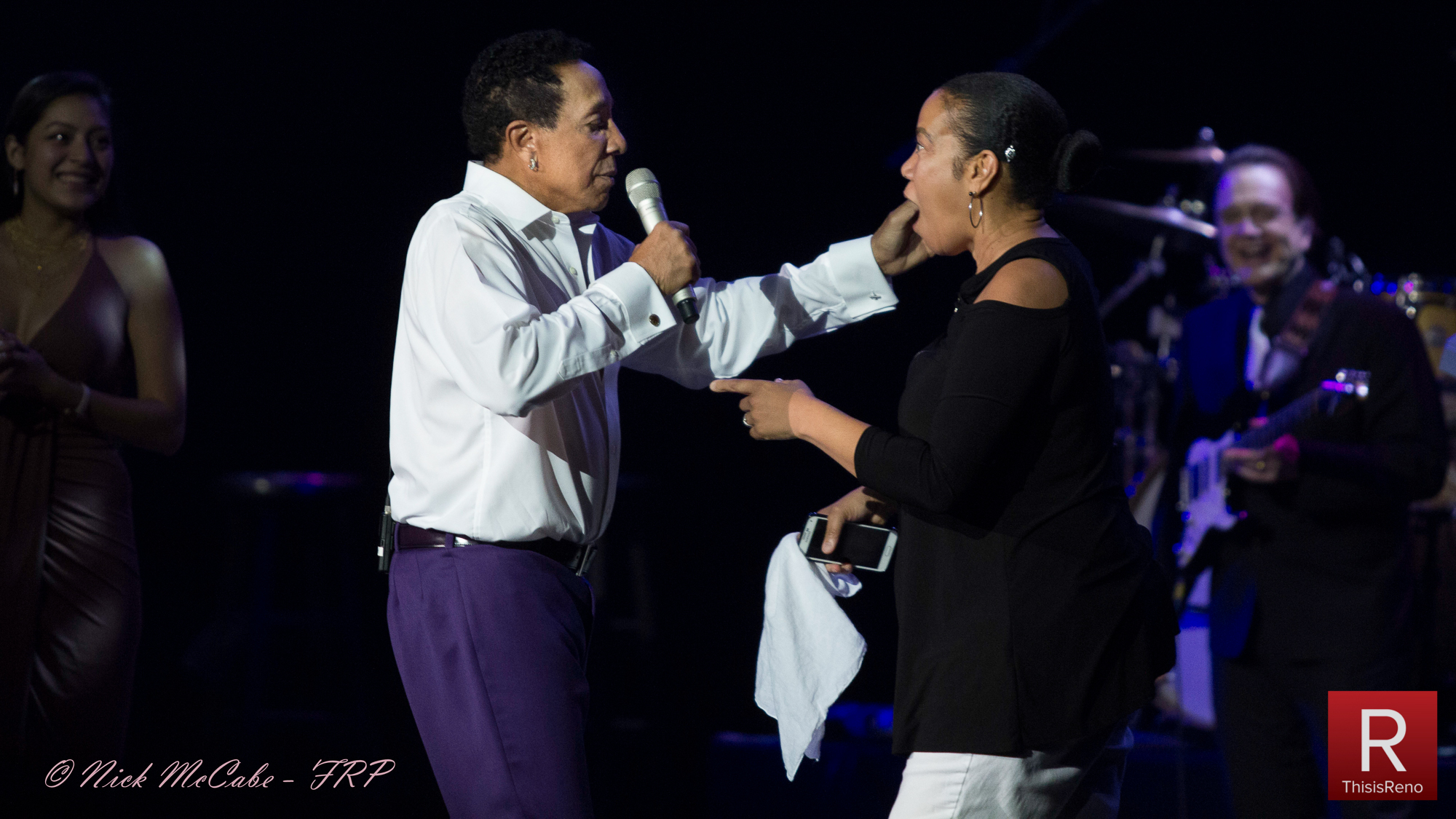 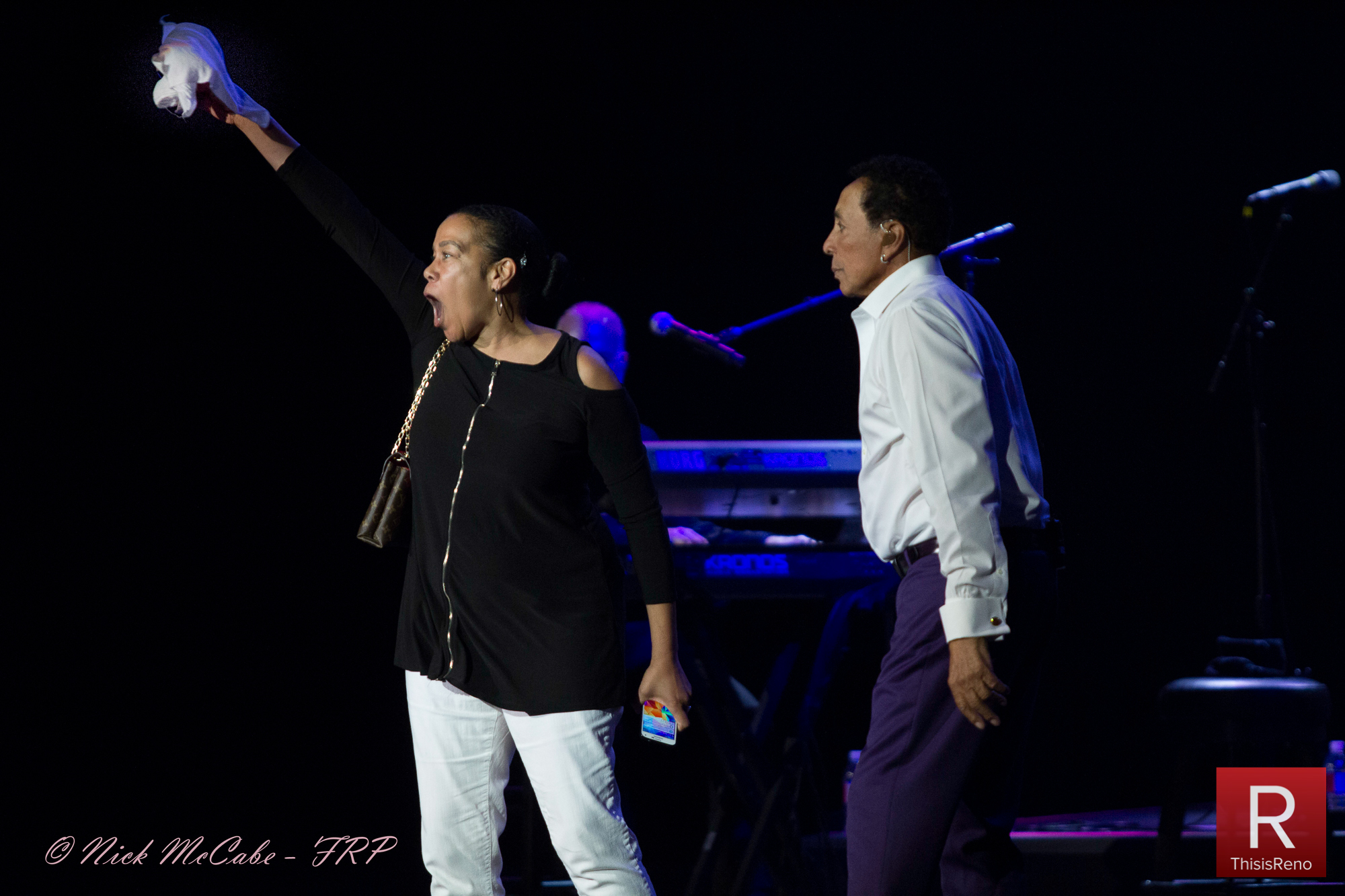 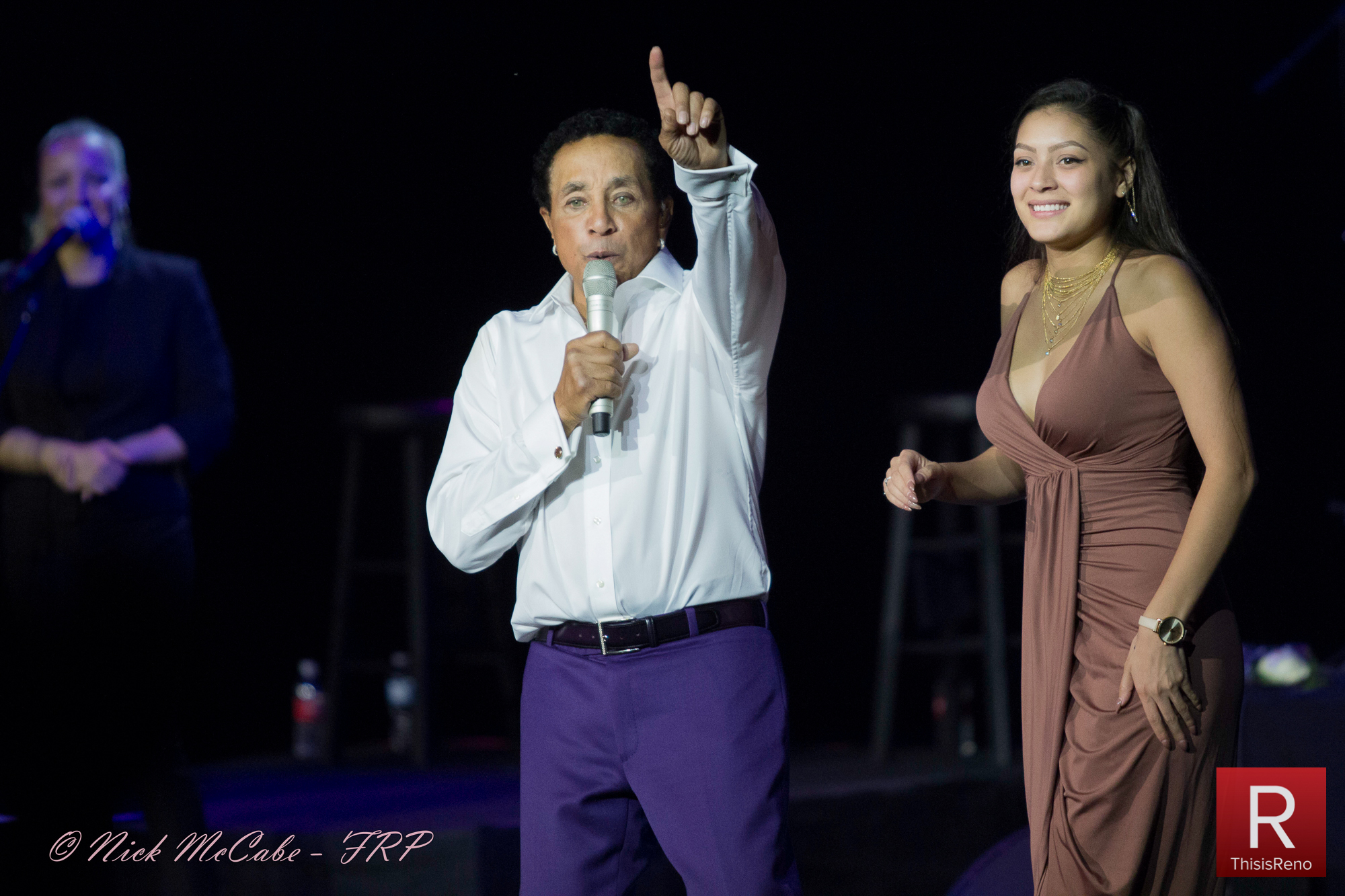 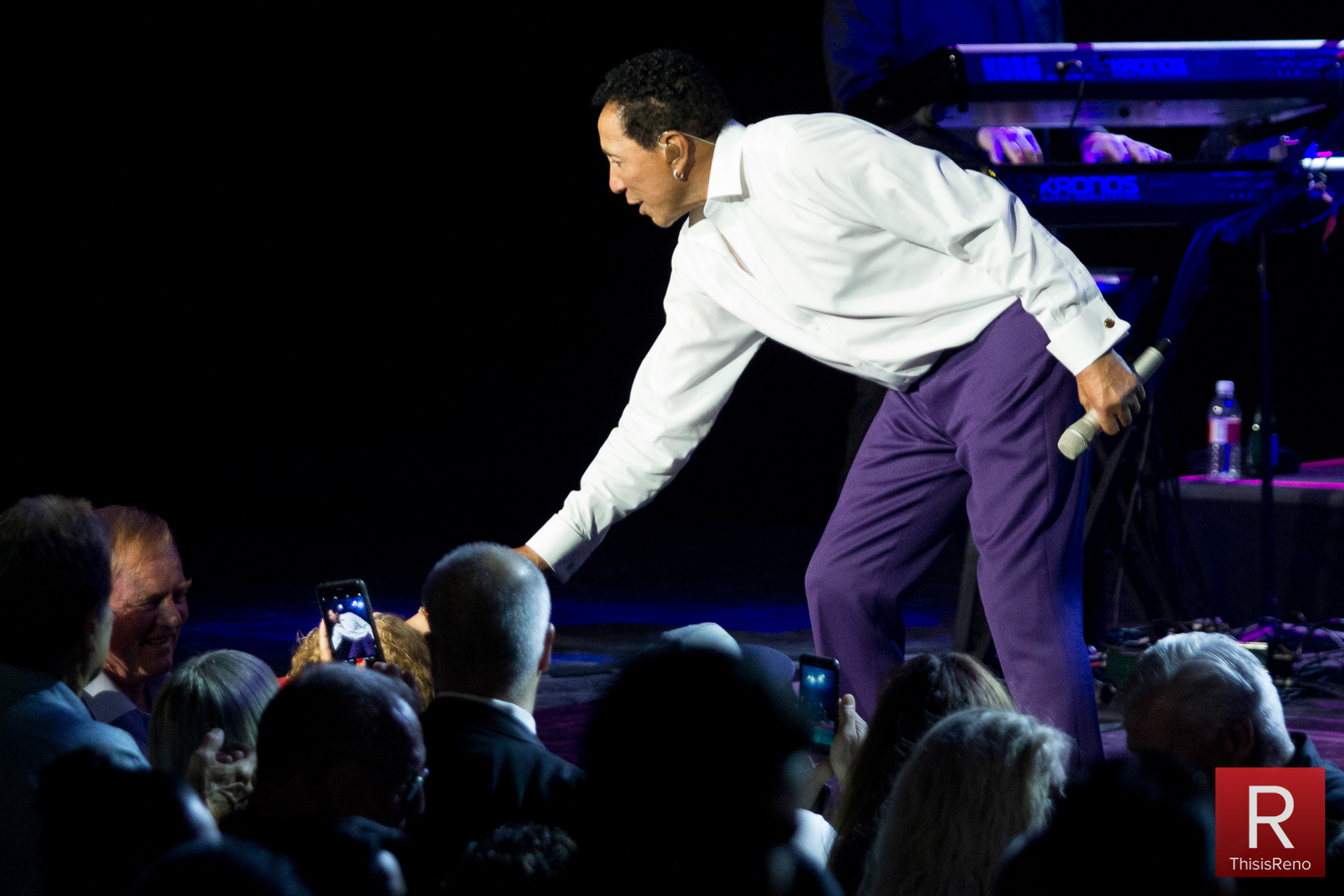 It was like ‘Smokeymania’ at the Grand Sierra Resort in Reno when Smokey Robinson hit the stage Friday night. Screaming filled the air, but these were not teenage girls screaming. These were woman ranging from a very young age to at least into their 80’s. As I crouched at the edge of the stage to take my pictures the noise behind me was greater than the noise in front of me, and it was all a joyful noise.

Smokey Robinson founded the precursor to The Miracles in 1955 and after a few modifications to the lineup they renamed themselves The Miracles in 1957, the same year he met Barry Gordy. Shortly after that Barry Gordy founded Motown Records (originally Tamla Records). In late 1960 they recorded their (and Motown’s) first hit single, Shop Around, and the future was well on its way. 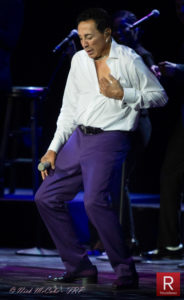 As the curtain rose, the band took the stage and started playing Being With You, but Smokey was nowhere to be seen. Then his sweet smooth voice filled the air and he appeared from rear center stage and slowly walked to the front center. Then he moved to the left corner. From here he slowly walked across the front edge of the stage making eye contact with the audience up front all the way across to the other corner while singing. This was a very nice entrance by a performer who has been at it for over 60 years.

This was an absolutely amazing show. There were no lasers or videos. It was just great musicianship and an outstanding performance by Smokey Robinson. At 77 I did not expect his voice to still be so clean and perfect. Plus, he had some moves that would make a harlot blush! He was very engaging with the audience and told some great stories about Motown, Stevie Wonder, and much more.

His performance of Ooo Baby Baby was so good he received a standing ovation. He responded with, “Well I guess that’s it! We should have started with that!” Midway through the show he went into a Motown medley / storytelling segment with band introductions that went on for almost twenty five minutes. When he introduced the drummer he commented on how the woman squealed when he did so and asked him why they did that. The drummer held up a pair giant drum sticks and everybody laughed. Smokey made a joke about him having a ‘big stick. Two of them!” This segment culminated in a story about Stevie Wonder writing a piece of a song that together they finished up that would become Tears of a Clown. 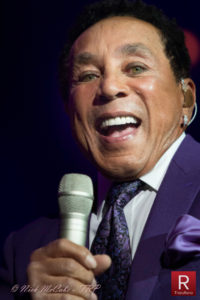 By the third quarter it was getting pretty steamy on stage. Smokey had lost his beautiful purple jacket and tie much earlier. Now he had a grimace of pure sexuality on his face and was grinding to the music and singing while slowly rubbing his hands all over his body. It seemed to please the women!

During Cruzin’, the last song of the show Smokey was bumping and grinding like his life depended on it. He was getting down! Then he stretched the song out while the band vamped on it. He wanted to have a feel good singing competition between the two halves of the audience. He invited two lovely woman up from the audience to be team leaders. With his arm around one of them he asked, “Do you know what you volunteered for?” She said she didn’t, and Smokey look at the audience and said, “We’ll be right back.”

He split us down the middle with our leaders in charge and had us exchange singing, “I love it when we’re Cruisin’ together.” It went on back and forth for several minutes with playful exchanges between him, the girls, and the audience. The house was completely into it and having a great time. He had everybody in the palm of his hands. When he was done with us he waved and marched off the stage while the band continued to play and sing, “I love it when we’re cruisin’ together.” No encore, but that’s okay. We were all spent.

I was truly amazed at how much effort Smokey put into entertaining his audience. I really didn’t think I would like the show as much as I did, but I found myself grinning ear to ear several times throughout the evening. His 9-piece band was wonderful. They sounded as professional as you could hope for.

Being With You
I Second That Emotion
You’ve Really Got a Hold On Me
Quiet Storm
Ooo Baby Baby
Medley: The Way You Do The Things You Do / Get Ready / My Girl
The Tears of A Clown
Fly Me To The Moon
B-side Medley
Just To See Her
The Tracks Of My Tears
Cruisin’