By ThisIsReno Published: September 5, 2017Last Updated on April 11, 2019
A blighted property was removed by the city to make way for a Burning Man sculpture park. Image: Carla O'Day 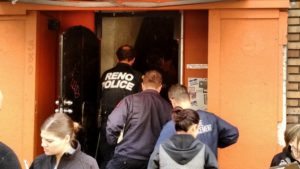 In Reno, local news media talk about the problem with the homeless. These unfortunate people haven’t asked to be in this position. There are numerous reasons for the dilemma. The people who are responsible for their plight is the City of Reno themselves.

The City of Sparks does not seem to have this problem. So far, all any involved with the City of Reno has done is talk about a solution and search for others for the last three years. There are solutions. Very simple ones.

I know you are wondering how I can blame the city. I will give you some examples of what they do. The owner of Carriage Inn and Donner Inn were forced to sell their properties due to City Code Enforcement’s heavy handed tactics by fabricating complaints. These two motels were sold and are now closed. All of the people were forced out.

Code Enforcement comes in under the guise of complaints. They inspect the property, and when they leave, the owner is given a list of repairs. When they come back to reinspect, more things are found. Finally they clear the motel, but surprise — they come back again and again with more expensive repairs to be made until it becomes too expensive and frustrating that the owners are forced to sell.

Yet, the City of Reno, Washoe County Health and the City Code Enforcement are continuing to harass small motel owners and putting them out of business.

Here is a simple solution: Form a citizen panel of business owners to arbitrate between the motel owners and the city as to what is really fair. That would stop the needless closure of motels.

The Mayor, Hillary Schieve, has located $1 million for blighted properties. The city could offer low-interest, revolving loans to those property owners so that money could keep circulating back into that account for the prime purpose of helping others.

This would then keep the motels open and provide more rentable rooms for the homeless.

If the City of Reno and City Code Enforcement would slightly relax their standards and work with each motel owner, these closed properties could be opened.

It is time for the City of Reno to stick with them and help.

Earlene Otto Ali is manager of Desert Sunset Hotel, which has been shuttered by the city for code violations.