“We started with nine sites and shortlisted down to four,” said Pete Etchart, district chief operating officer. “Wildcreek was head and shoulders above the others.”

The 212-acre Wildcreek public course at 3500 Sullivan Lane in Sparks is currently run by the Reno-Sparks Convention and Visitors Authority (RSCVA) and owned by Washoe County. It has an 18-hole, par-72 course and a 9-hole, par-27 course on site and is operating at a loss of $270,000 annually.

The district is expected to make an offer on 75 to 80 acres of that property by year’s end. Exact costs of land and construction haven’t been determined.

Other sites on the shortlist were east of Truckee Meadows Community College (TMCC) main campus, south of TMCC and on Bureau of Land Management property north of Wildcreek. The biggest challenges with the TMCC sites were terrain concerns, including school buses driving on hilly streets in winter, along with multiple property owners and inadequate road access. 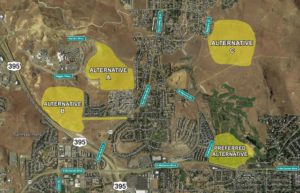 Etchart also noted the eastern end of TMCC is likely no longer viable because the college plans to build its own fitness complex and athletic field.

The BLM property consists of no utilities, no access roads, a potential lengthy federal acquisition process, and would require extensive grading due to slopes, the assessment stated.

The school district is spending $200,000 to conduct due diligence on the Wildcreek property and is expected to finish by November, Etchart said. This includes surveys, traffic studies, environmental assessments and addressing issues with the Federal Aviation Administration, among other things. Traffic Works LLC and Wood Rodgers survey and engineering firms are scheduled then to present findings to the district’s board of trustees.

“Nothing is going to be perfect,” Etchart said. “Soils in the area aren’t good. There’s clay in the area.”

Clay could mean excavating 4 to 5 feet deep and replacing it with optimal soil. The building of North Valleys High School in 2001 caused crews to go down 14 feet due to soil issues, Etchart said.

Tentative plans are for the 2,500-student school to go on the 9-hole course and on part of the 18-hole course. A reconfigured 9-hole course in the area has been suggested. Other options floated for the surrounding property to be maintained by Washoe County include a performing arts center, a community center, hiking trail, swimming pool, tennis courts, a preschool, and outdoor learning center. However, uses for surrounding property are up to the county.

The new school at Wildcreek would replace Hug High School, 2880 Sutro St., which was built in the late 1960s that serves about 1,450 students. Plans are to close Hug at the end of the 2020-21 school year and send most of its students to the new school at Wildcreek, located 1.8 miles to the east. It would also draw from Sparks, Reed, and Spanish Springs high schools. Hug would then reopen as a career and technical academy in fall 2022.

“Just because we identified a site, it doesn’t mean the current property owner will want to sell,” Etchart said.

“Hug is a small site,” he added. “So to expand there isn’t feasible and then we’d lose the ability to turn it into a career and technical academy.”

Repurposing Hug is important because the Academy for Art, Careers and Technology—Washoe County’s other career and technical academy—is full and has a lengthy waiting list, Etchart said.