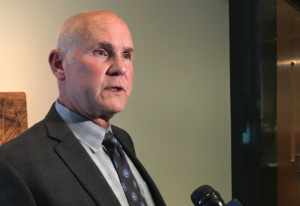 NOTE: This article reports on explicit adult, sexual, and drug activities and may not be suitable for everyone.

The City of Reno released today the investigation it commissioned from a private investigator to document potential illegal activities at area strip clubs and other adult businesses.

Despite City Attorney Karl Hall’s insistence that the report is confidential under attorney-client privilege, a point that open-government advocates and the news media say is a violation of Nevada’s Public Records Act, City Manager Sabra Newby said the report has been released “to promote public trust and accountability.”

It was only when Councilwoman Jenny Brekhus mentioned the private investigation at the last city council meeting that it was revealed that Hall had commissioned the investigation. He refused to comment on the report at that meeting, and Reno Police Chief Jason Soto said he was unaware of Hall’s investigation.

“The City is committed to governmental transparency at all levels. In the interest of full transparency, I have decided to waive the attorney-client work-product privilege on the adult businesses report prepared for the City Attorney’s Office in anticipation of future litigation.

“As City Manager, I feel it is important that the public and media have access to the report at this time, given that the City Council is considering new laws that may impact how adult businesses operate, and where they will be permitted within the City of Reno.”

The City did not indicate how much is cost to hire Elite Investigations to infiltrate strip clubs and conduct undercover surveillance. The company visited seven strip clubs and adult businesses, as well as surrounding neighborhoods, and reviewed the clubs’ social media feedback, which were mostly reviews on Yelp. Surveillance was conducted in early 2017. The report was given to the city in late July.

A handful of establishments had negative findings, including alleged acts of prostitution and drug use.

The following was documented at Wild Orchid:

This was observed at Fantasy Girls: 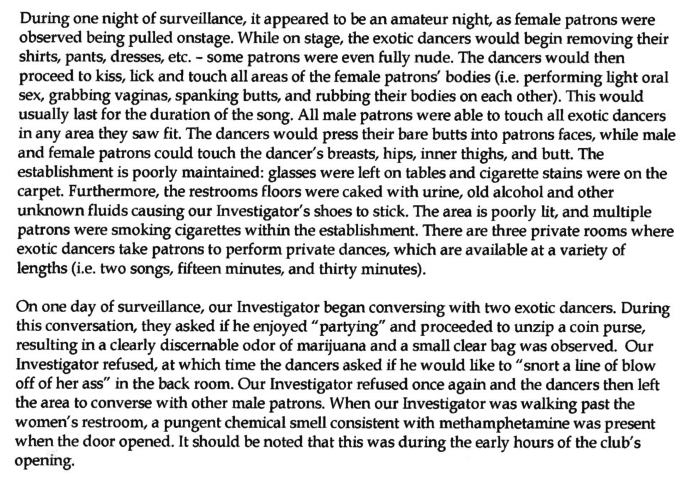 Newby said that the report was being referred to city code enforcement and the Reno Police Department. The report appears to confirm what critics of the strip clubs have been saying — that the clubs promote illegal activity and should be removed from downtown.

Others, however, including employees of the clubs, have defended the operations.

“I work at Fantasy Girls and we do not tolerate any ‘soliciting,'” said Shaylynn Ellis. “If we find out one of our dancers is offering ‘extra services’ she is fired, whether we find out when it happens at the club or find their ads posted to Backpage.


“The ONLY reason city council is doing this is because of the Ponderosa and Orchid not looking the way they want Midtown to look.  They say our businesses aren’t ‘family friendly’ and that’s what they are trying to turn Reno into. By that logic you need to remove all pawn shops, bars, casinos, etc. as well.”