By Bob Conrad Published: August 5, 2017Last Updated on April 11, 2019
A proposed location for the new overflow homeless shelter is at 250 Sage Street. The property has a number of environmental concerns. 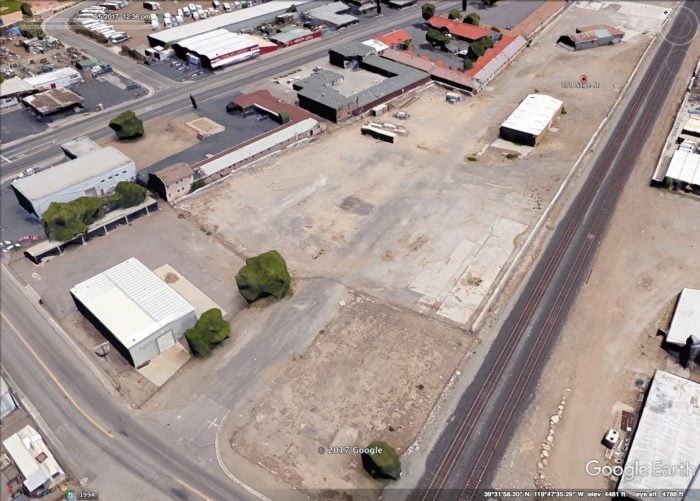 A proposed location for the new overflow homeless shelter is at 250 Sage Street. The property has a number of environmental concerns.

Previously identified sites for a permanent overflow homeless shelter are imperfect locations to house the new facility. That’s according to city staff who considered four possible parcels for the new shelter.

Staff are recommending that the city council select one of two courses of action: pick the site at 250 Sage Street that needs environmental clean-up, or find a new location.

The Sage Street location was previously used by the Southern Pacific Railroad, a towing company, a concrete construction firm, and an asphalt company.

A consultant’s memo to the city, after a visit to the site, found that it has an unused underground storage tank, a standpipe with unidentified sludge, an abandoned RV, drums containing waste oil, and storage tanks with waste oil and propane.

“…recommends (Sage Street) as the only viable property based on previous direction from Council and discussions with associated stakeholders. Staff had previously recommended (this property) due to the feasibility of usage and to mitigate impacts to the river. Alternatively, staff recommends that Council give direction to identify new potential locations for a permanent overflow site.”

The Sage Street site also has a “fuel line running through (the) property which may disallow housing…” according to a city report.

Another property was removed from consideration because it is privately owned, and the owner is unwilling to sell. Another site is leased to the ReTRAC revenue bond and Waste Management may be interested in purchasing it.

The City Council is scheduled to hear more at its Wednesday meeting.

Reno reached out to Washoe County and Sparks about other potential land for the new shelter. Sparks indicated that it does not have available parcels for the shelter, according to Assistant Community Services Director Armando Ornelas.

“While Sparks staff understand and support the need for a new overflow shelter, the City of Sparks owns virtually no property that isn’t presently used for, or anticipated to be needed for, city facilities,” he said. “As I noted … the one … ‘excess’ parcel the city owns … would not be suitable as it is burdened by an access easement for an adjoining privately owned parcel and is bordered on two sides by single-family residences.”

Courtesy of the City of Reno.