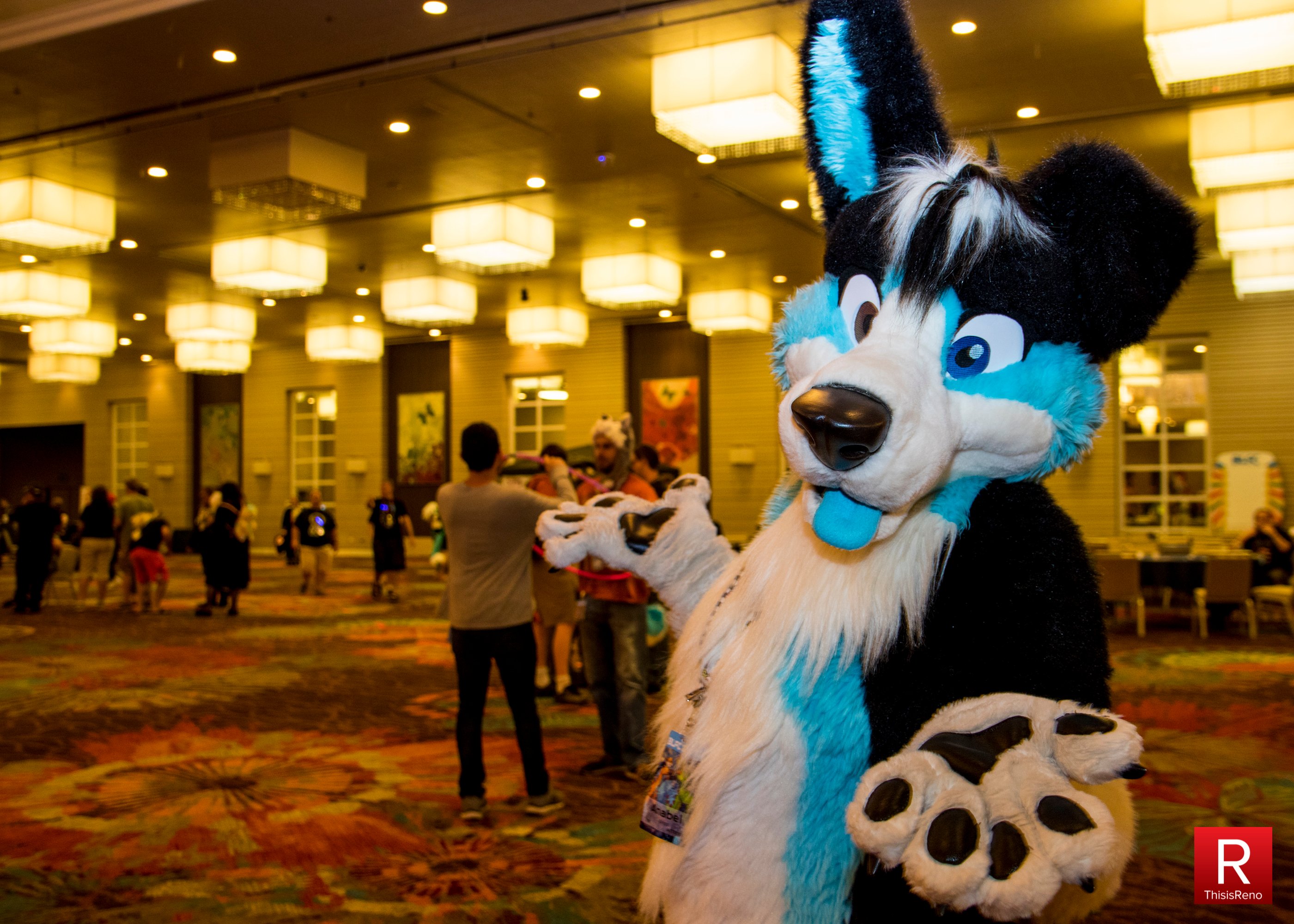 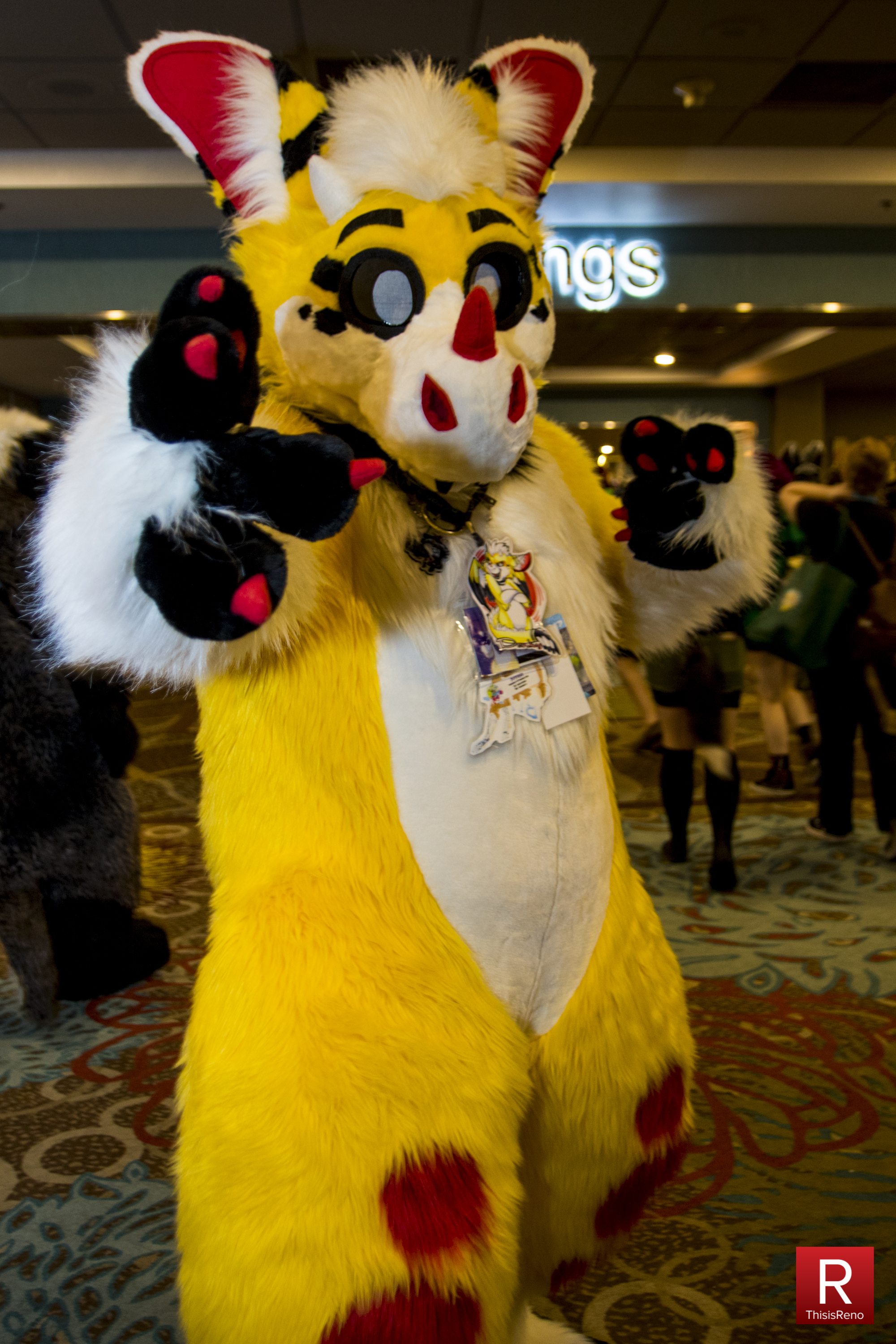 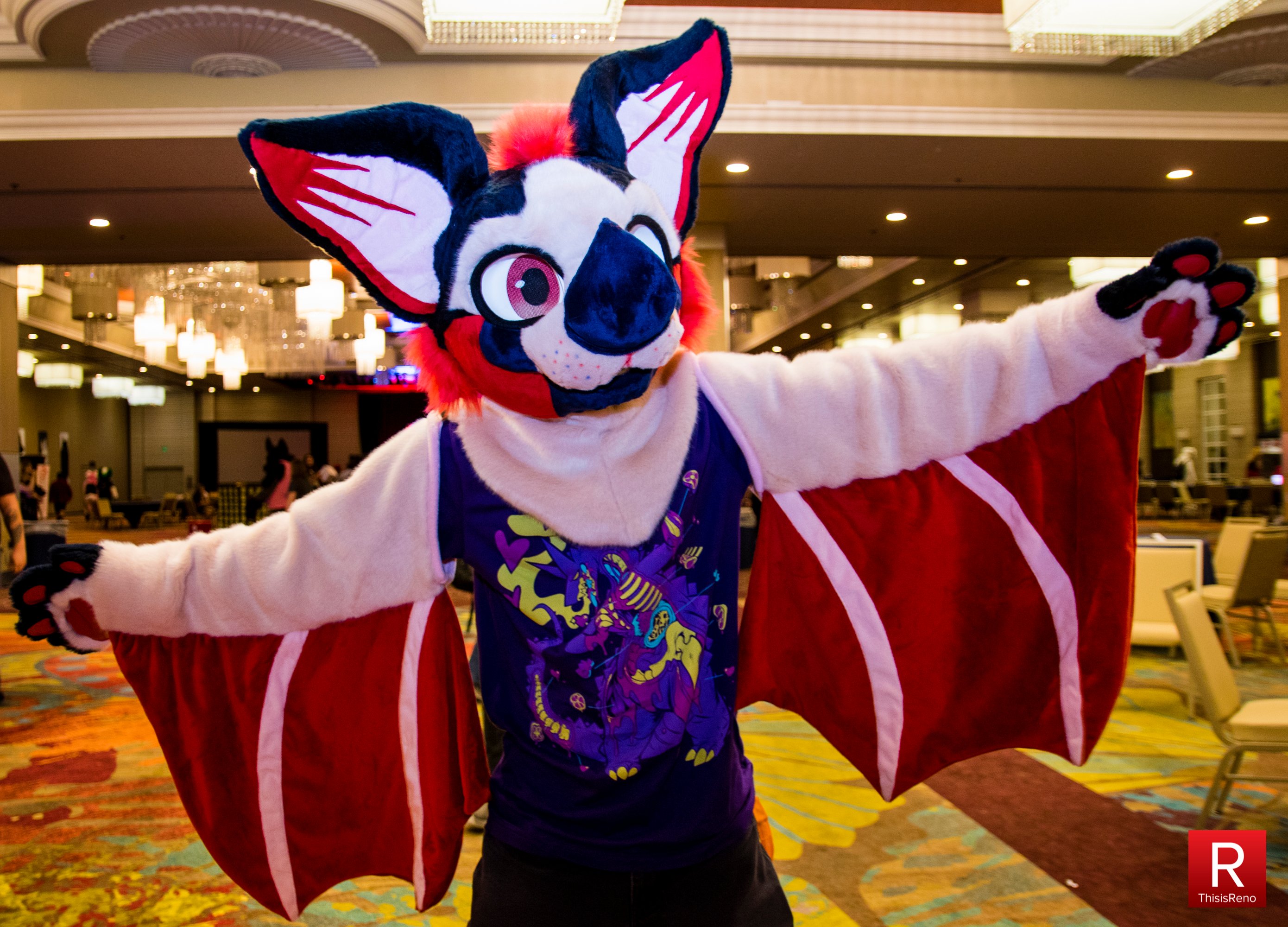 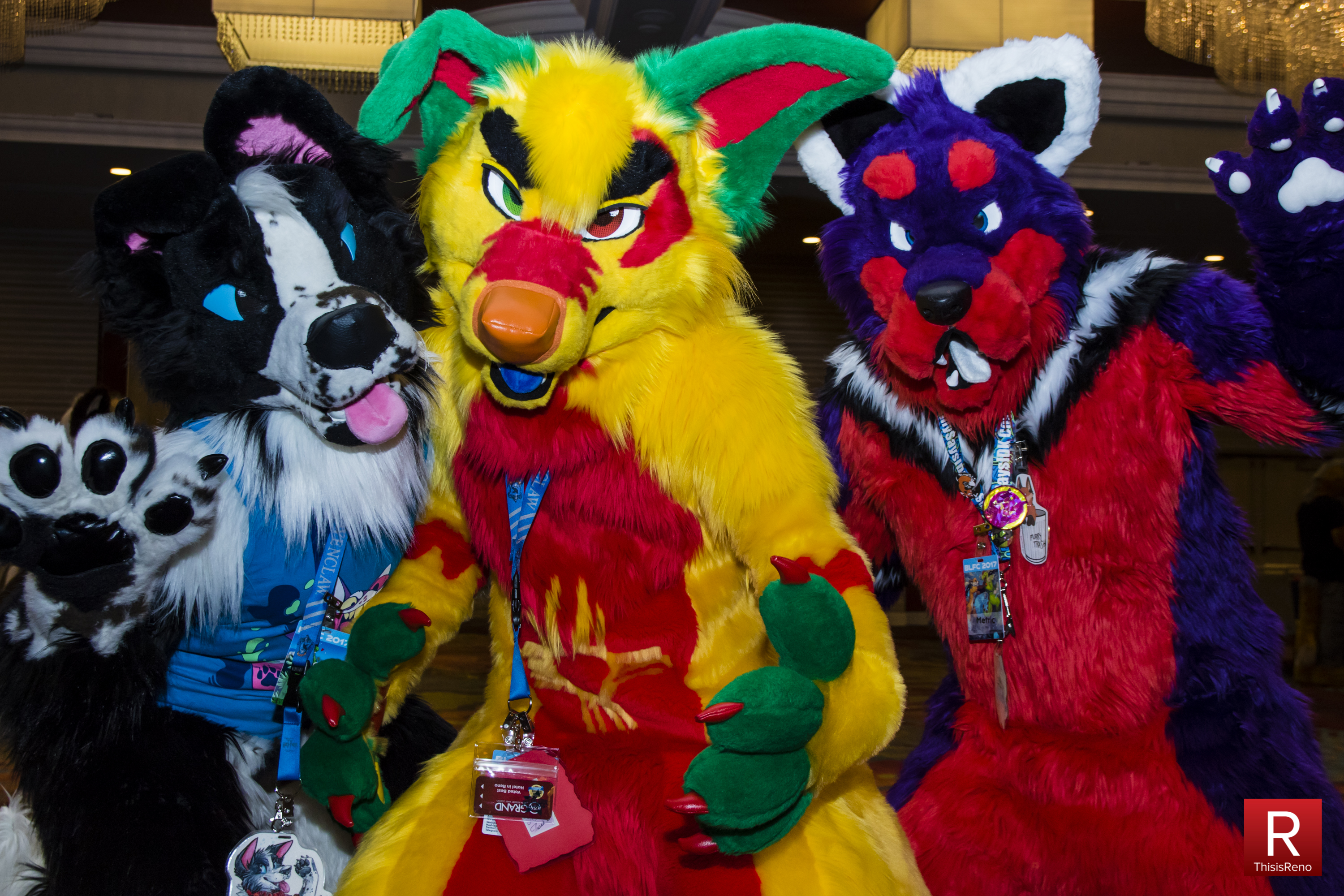 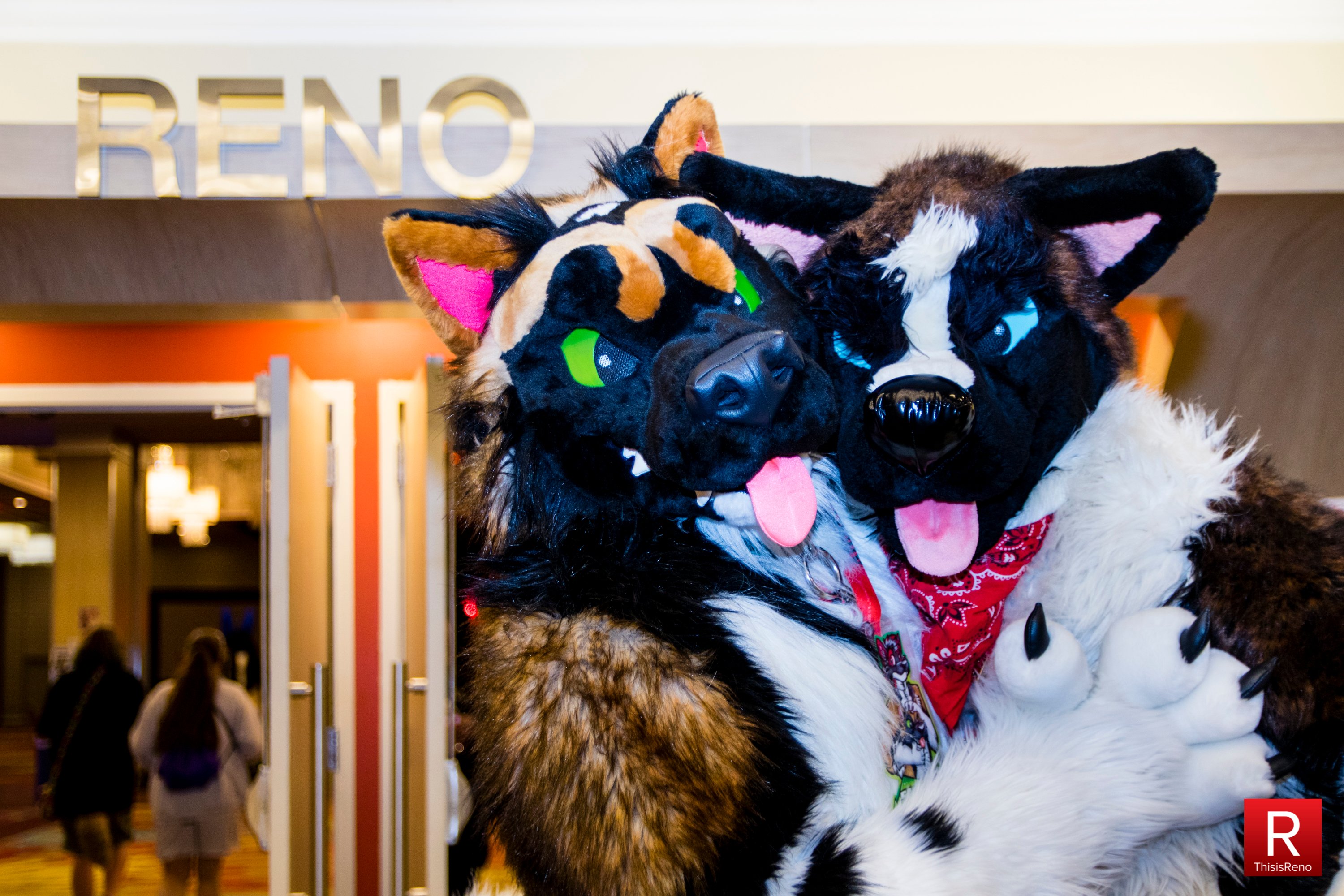 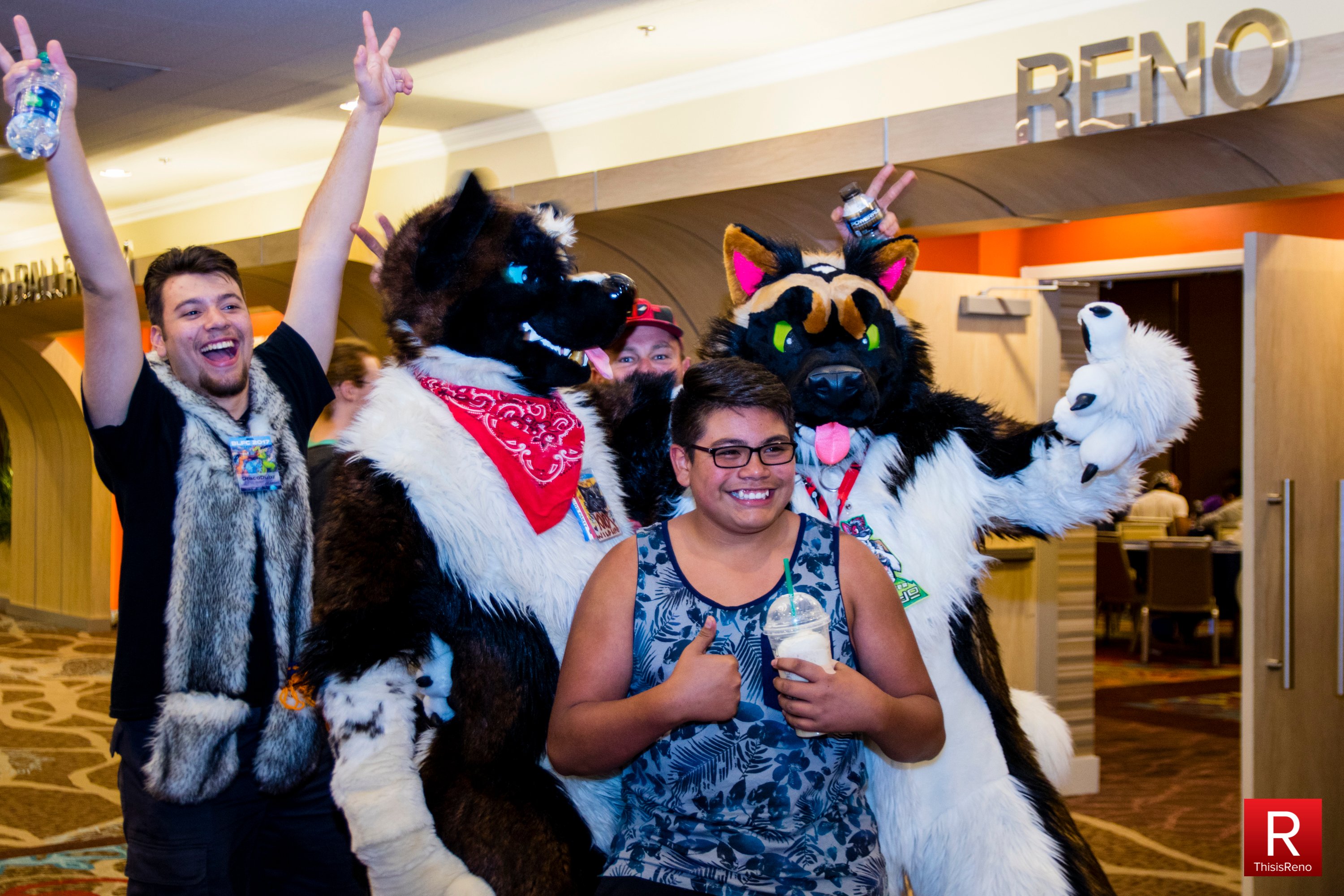 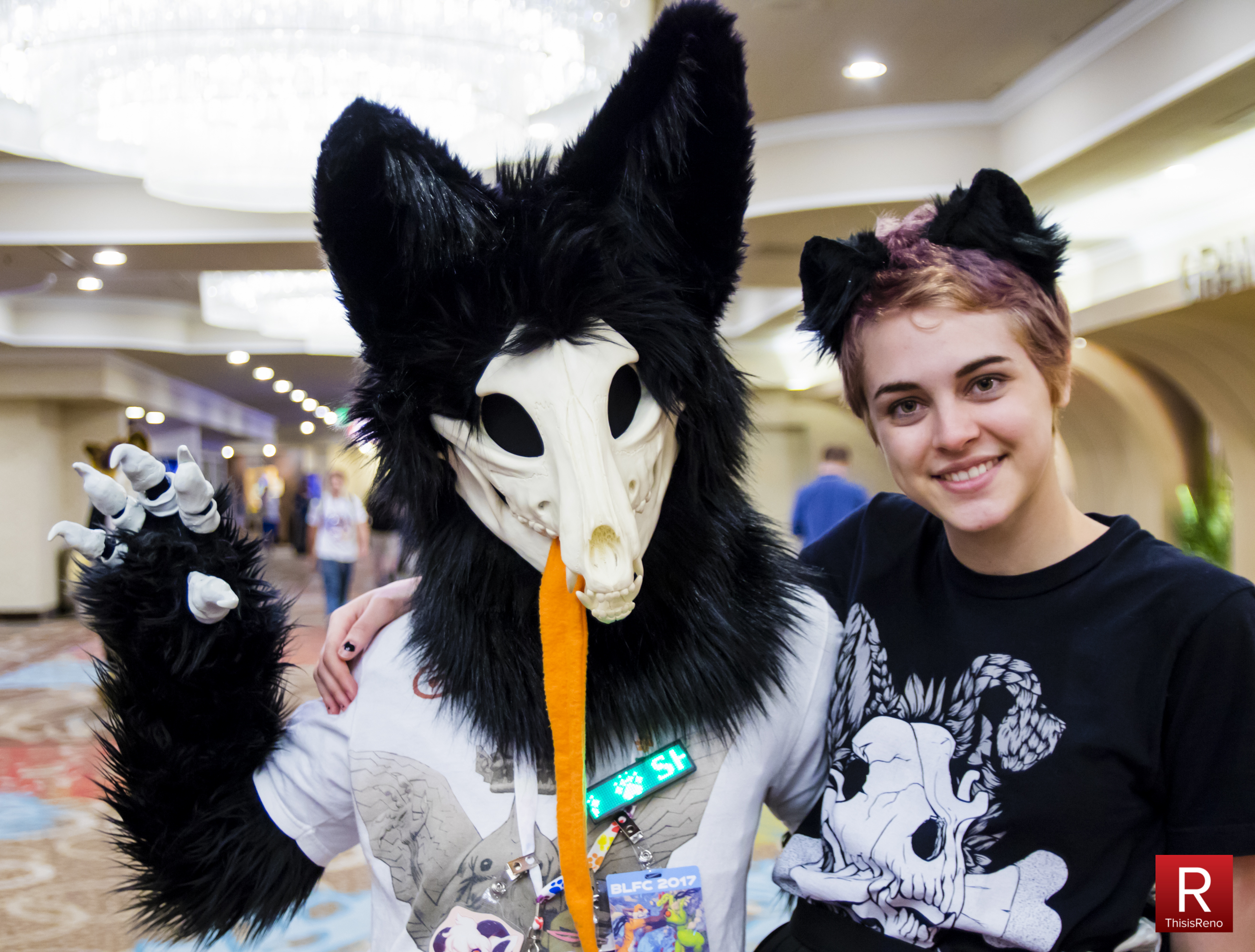 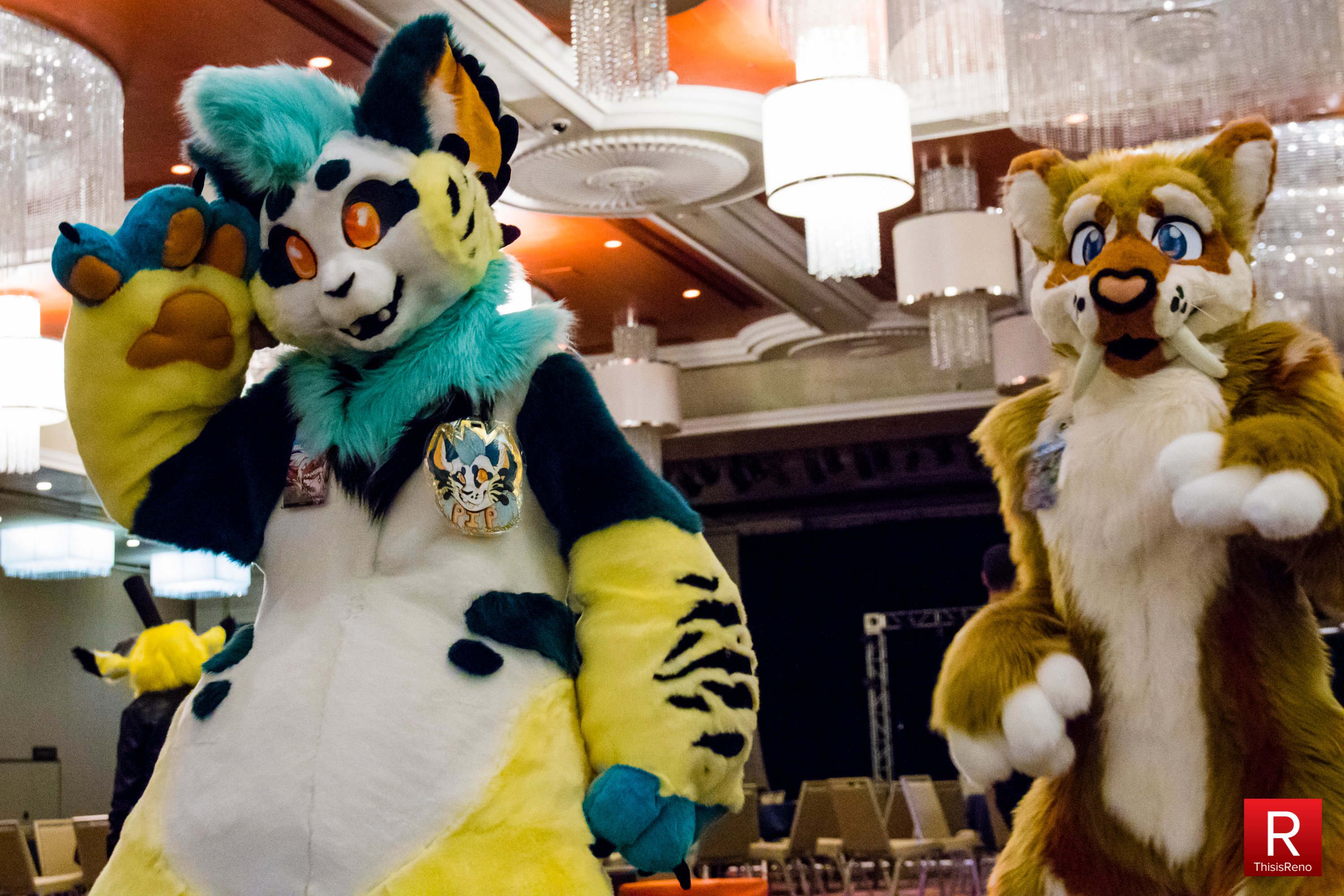 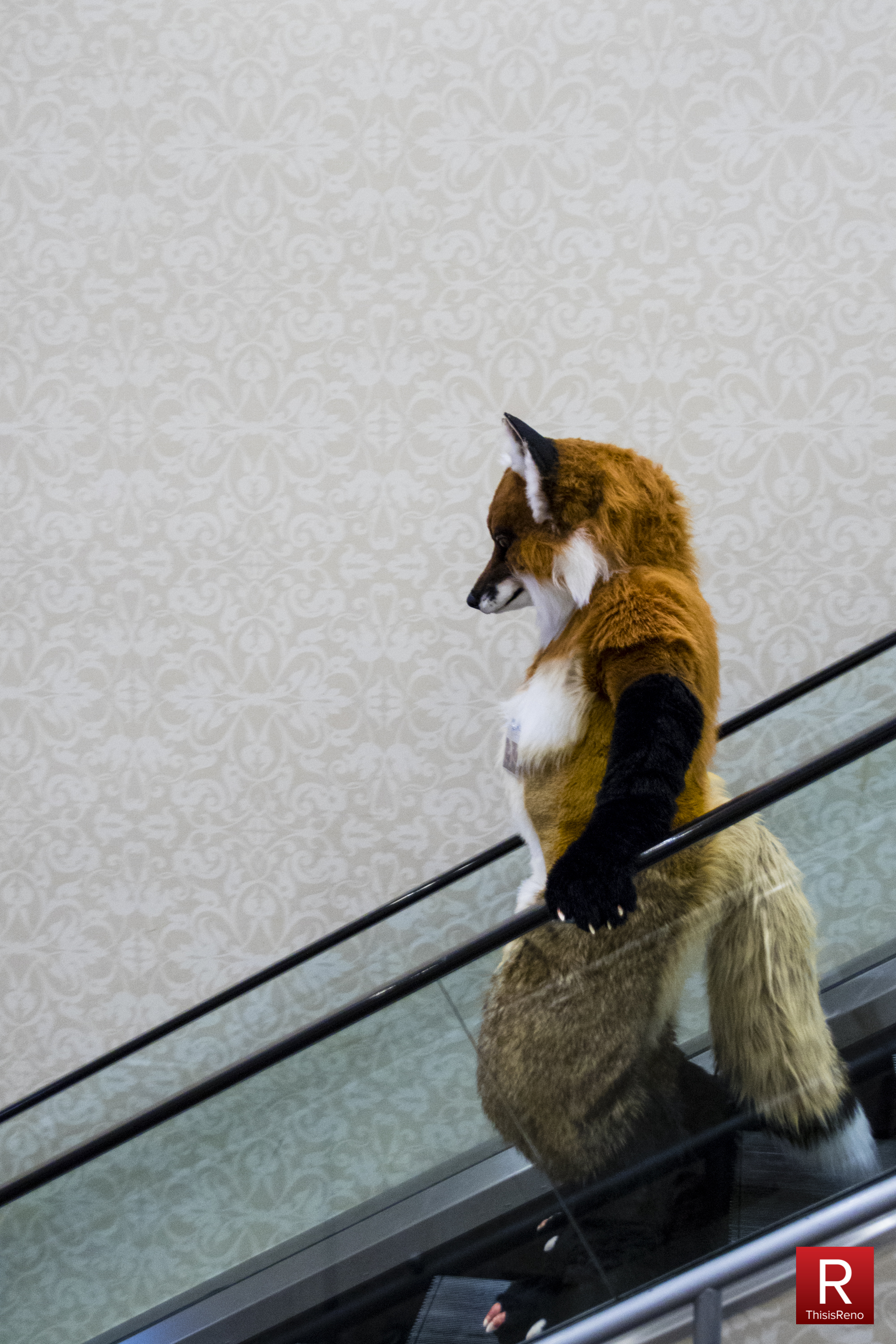 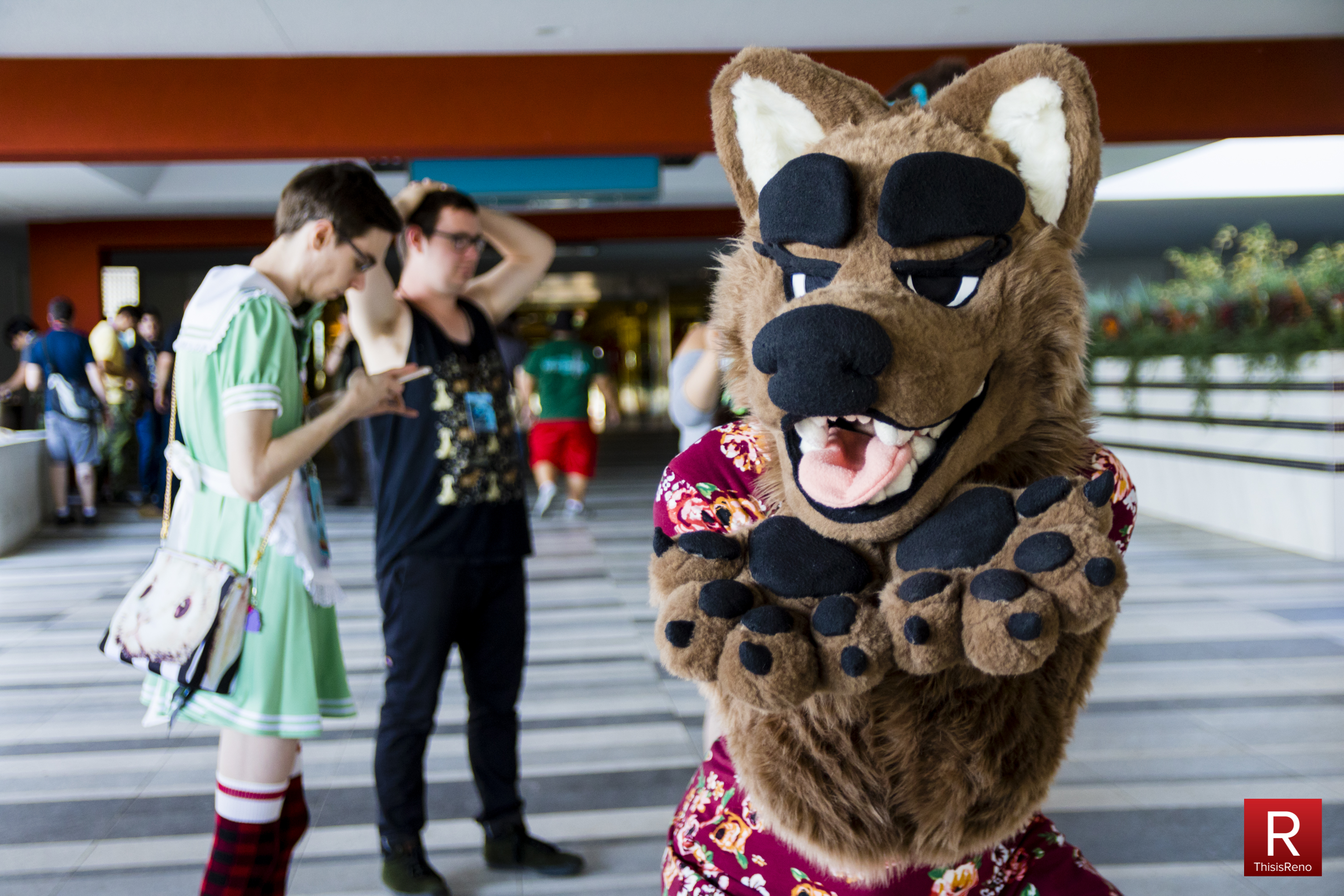 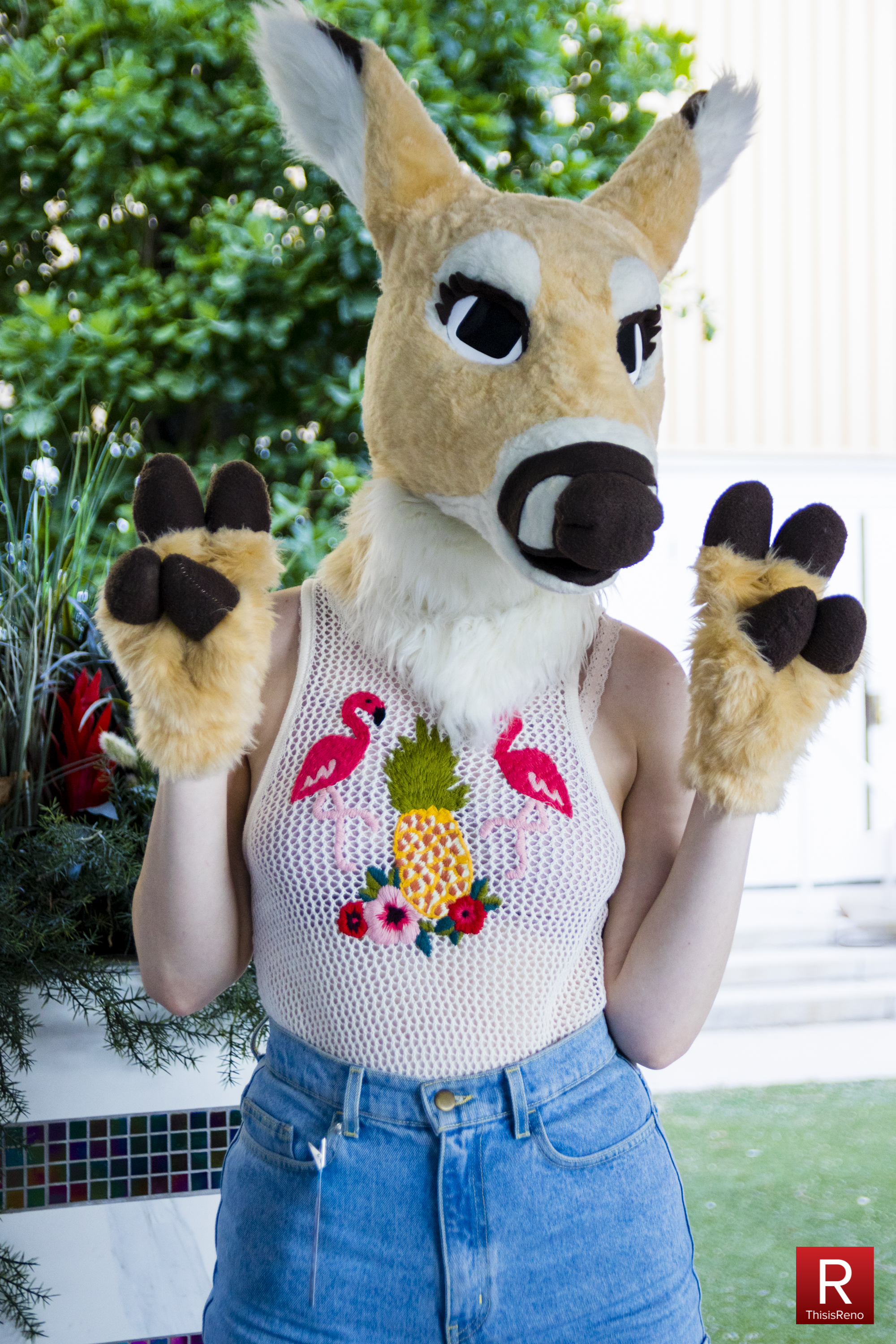 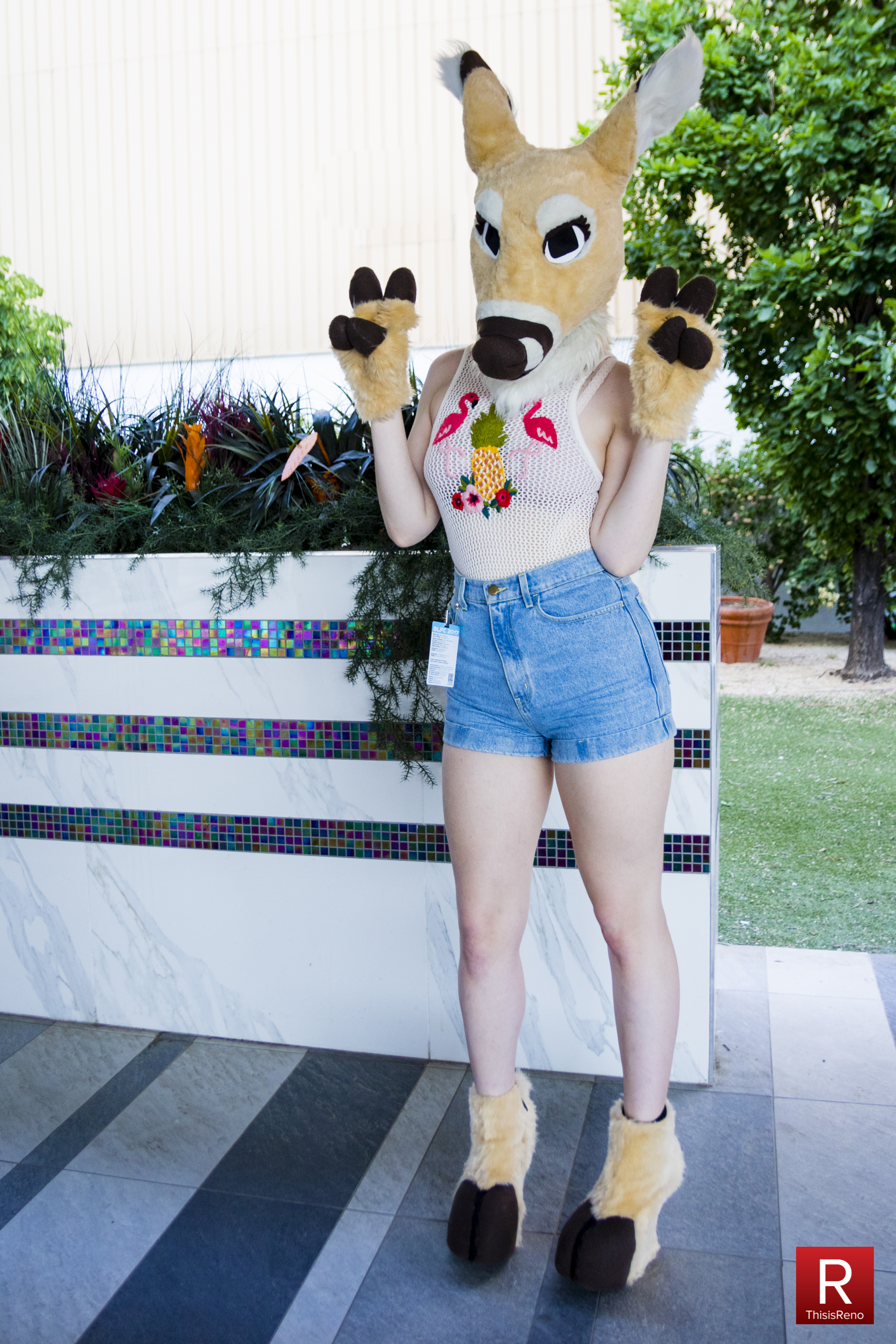 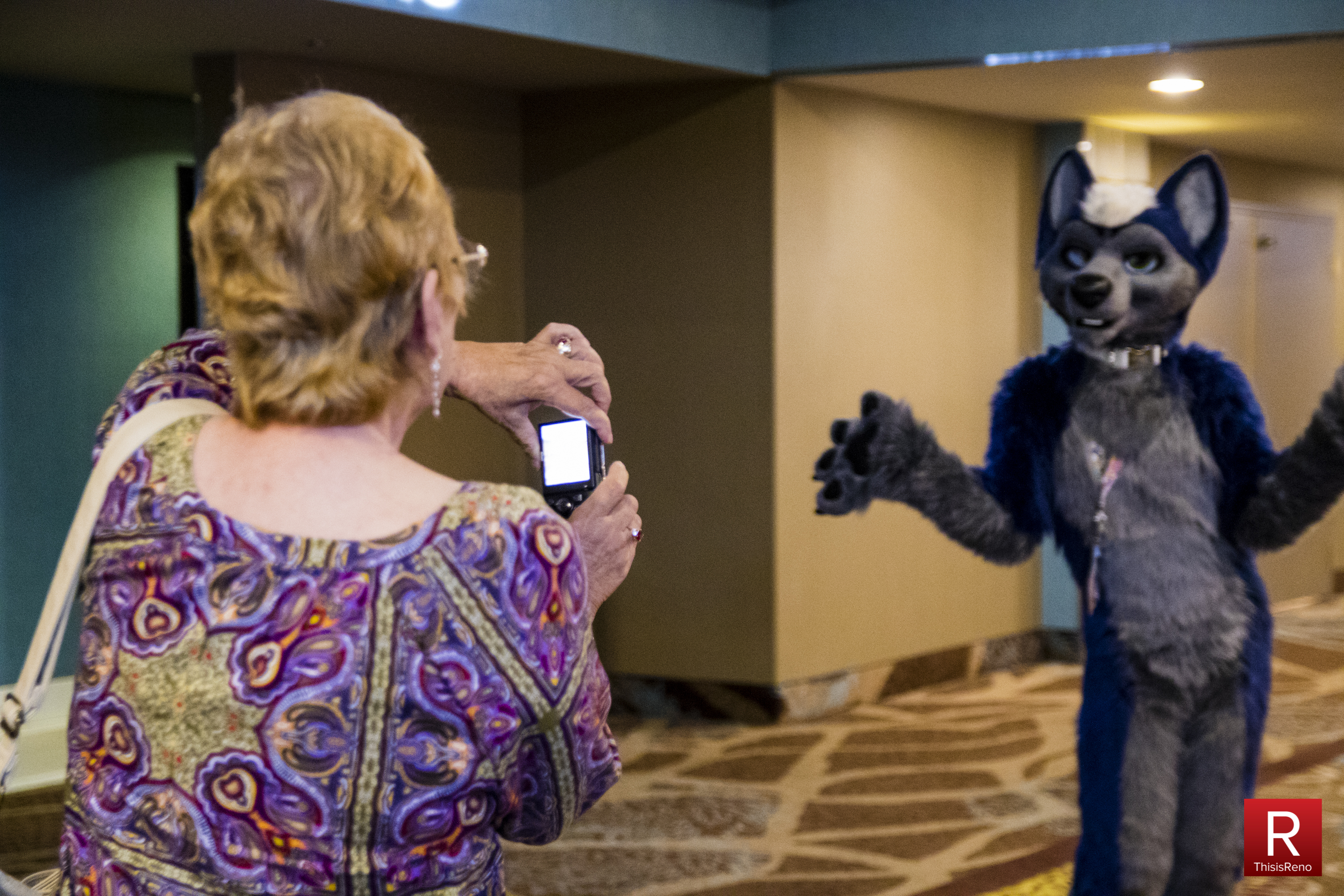 Hotel guests not involved in the convention requested photos of the participants in fur suits. Photo: Ty O'Neil 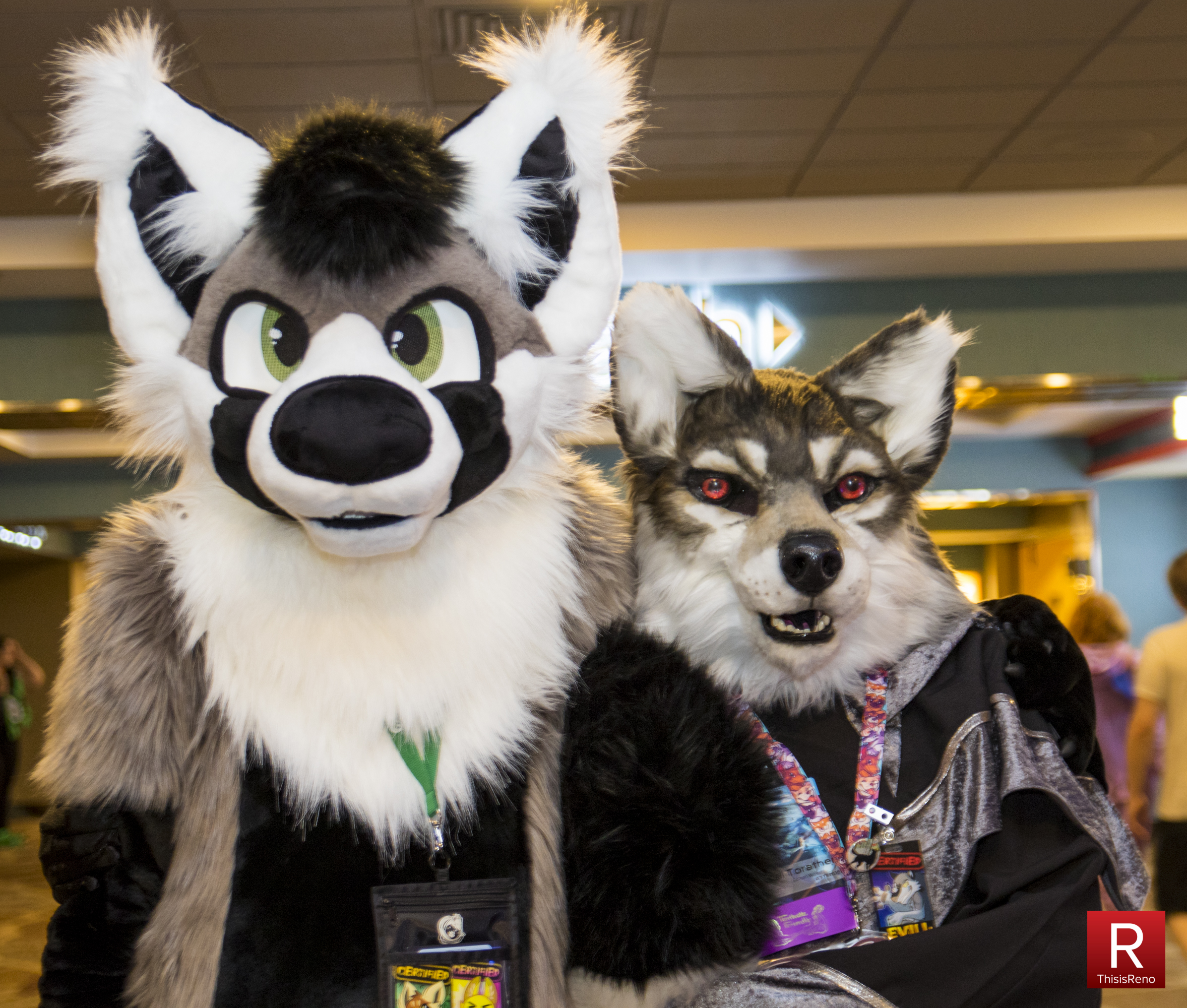 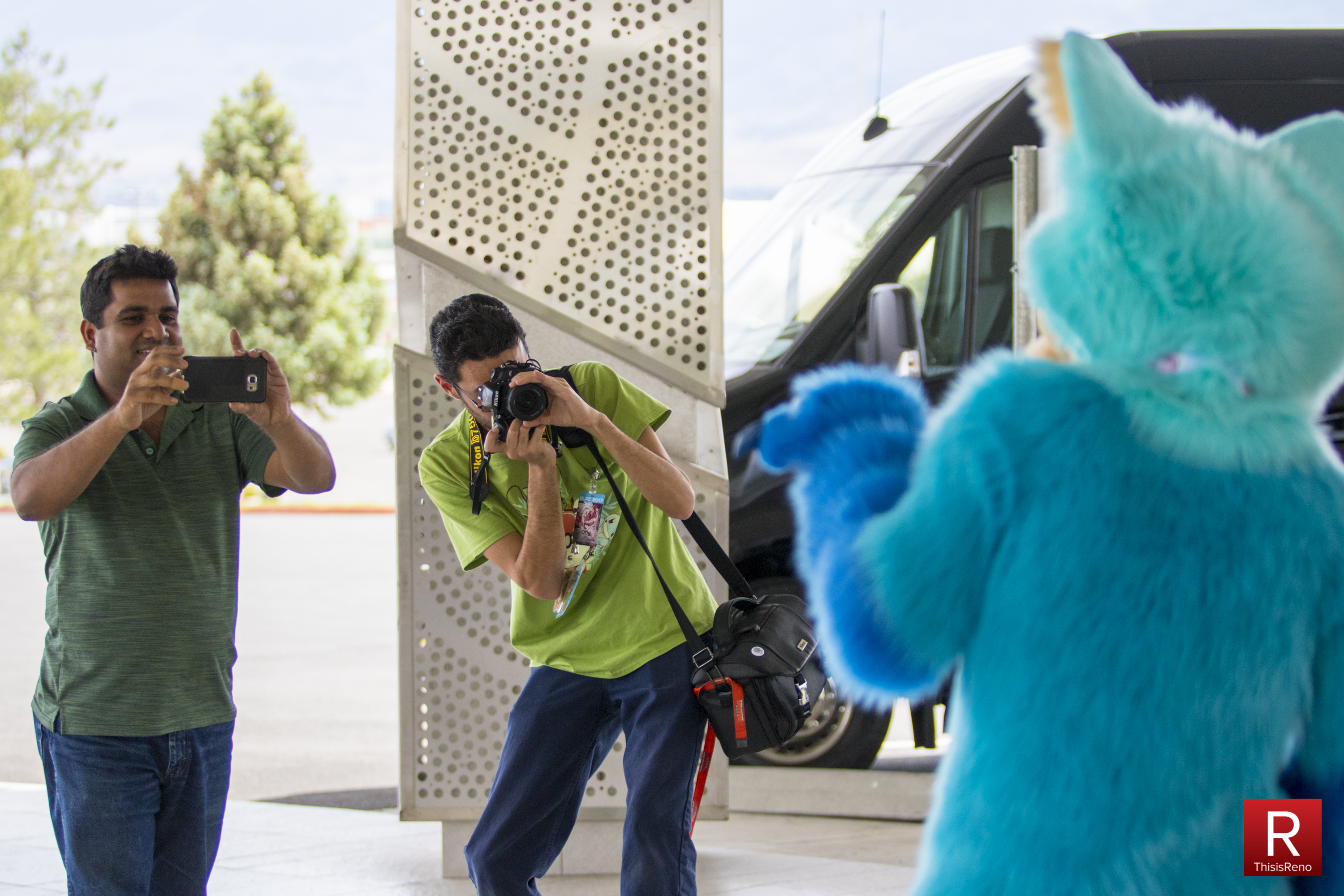 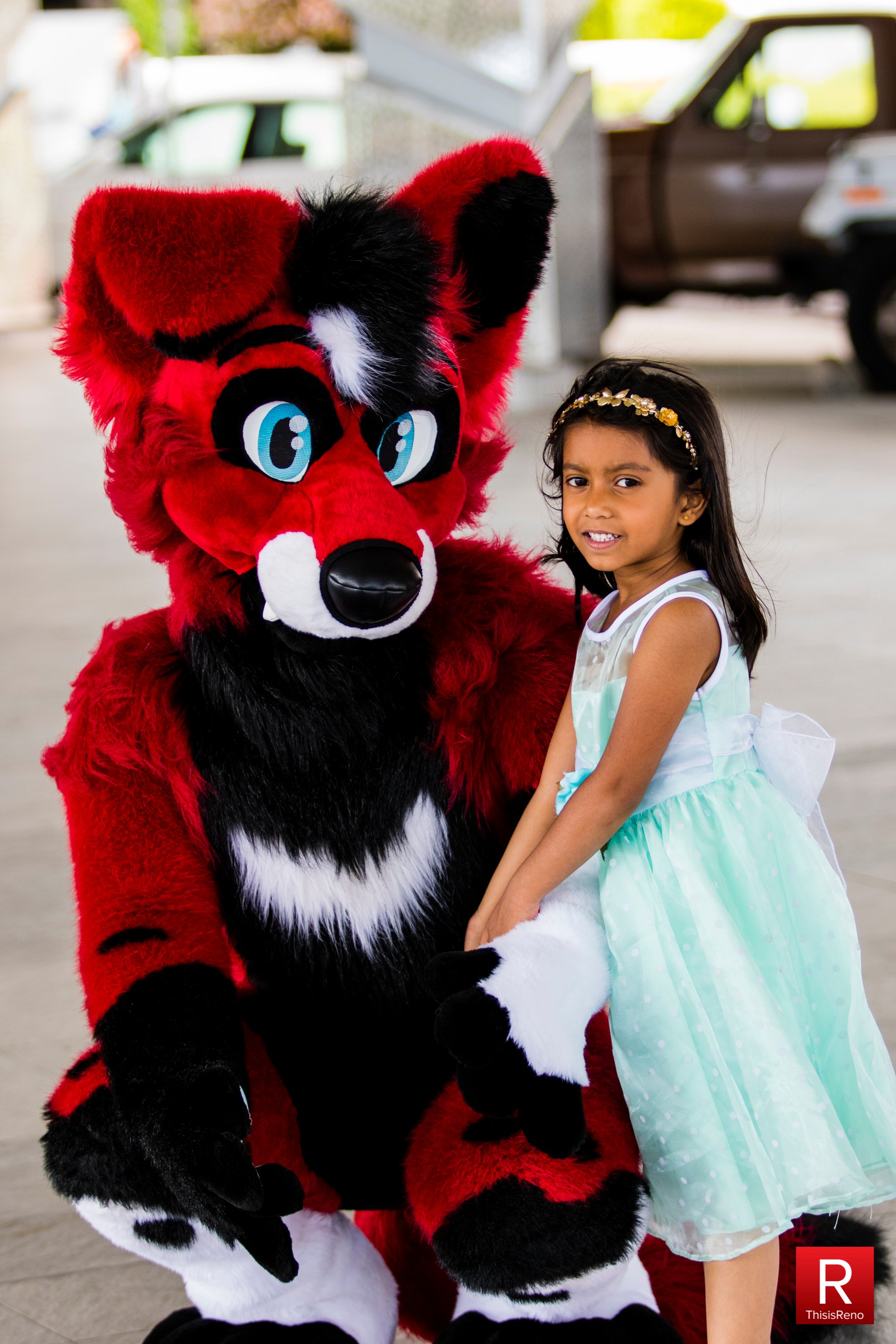 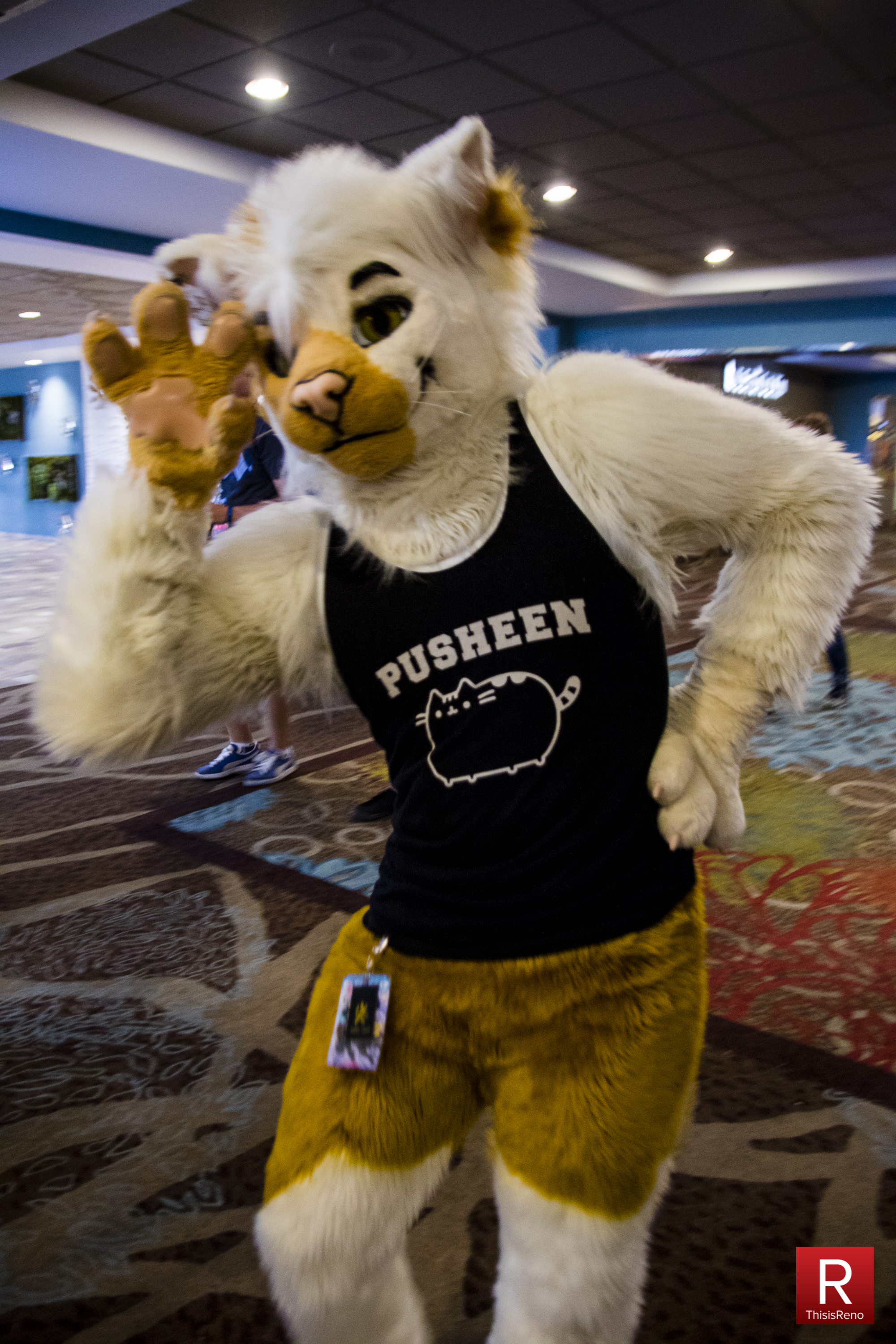 This year marked the fifth anniversary of the Biggest Little Fur Con (BLFC), which has already become the third largest furry convention in the US. The event was June 1-4 at Grand Sierra Resort. In its first year BLFC attracted around 700 attendees, but this year attracted nearly 5,000 attendees.

A furry is a person who is a member of a community of people who enjoy or celebrate anthropomorphic art—animals with human-like qualities. Think movies like “Zootopia” or “Sing.” The community is largely internet-based, but conventions offer a chance to meet each other face-to-face.

Byron Ginn, who goes by Treyn, is the convention’s media relations manager. He explained that the location of the event isn’t due to a higher number of furries based in Reno. Local residents likely only make up around 10 percent of attendees, possibly less. Most of the convention’s attendees are California residents who travel up from Sacramento and San Francisco for the convention, he said. Still others travel from much further away. 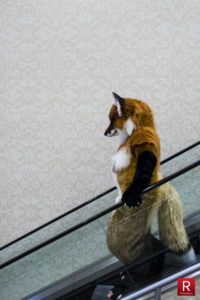 Why has the BLFC become so large, if not because of a large local presence?

Treyn said that casinos play a fairly important role in the attraction to Reno. Aside from the obvious draw of gambling, Reno’s sizable casino resorts offer more hotel rooms either in the same property as the convention or nearby. Resorts like the GSR also feature an all-in-one environment, allowing participants to attend the convention, get dinner, go to the pool, see a show, work out, and go shopping, all without leaving the venue.

Anecdotally, this all-in-one environment seems to have an influence on the number of attendees who wear fur suits. A fur suit is like a mascot costume, only generally more expensive and hand-crafted. Nearly one-third of the attendees to BLFC wear fur suits, possibly the highest percentage for a convention anywhere in the nation.

Affordability also comes into play when selecting Reno as the convention’s location, Treyn added. Of the 5,000 attendees visiting Reno over the weekend each one is estimated to spend around $1,000 each. That totals a possible $5 million in economic impact. And because of Reno’s accessibility and affordability, that $1,000 can go farther than it would at conventions in other cities.

Reno also has a reputation for having a libertarian philosophy, at least among the furry community members I spoke with. This likely also plays a role in why BLFC has done so well in Reno. The concept of personal freedom is very important to the furry community, and Reno’s reflection of this ideal seems to draw attendees to the area.

After attending the furry convention I began seeing furry community members at many other Reno events including Street Vibrations and Epic Crawl, sometimes in full costume. Generally they were either ignored or were asked to pose for selfies. 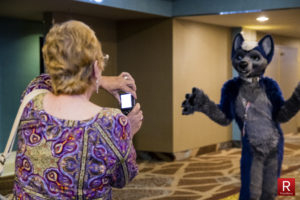 Hotel guests not involved in the convention requested photos of the participants in fur suits. Photo: Ty O’Neil

Furry community members mostly remain within the confines of the convention, but some interactions between the public and furries do take place. The GSR’s hallways were the main place for interactions and the vast majority were positive. I watched as two elderly women stopped nearly every fur-suiter they could find to take photos with and compliment their costumes. Kids are even more enthusiastic about photos, dragging parents from one furry to another.

Not everyone is happy to see the furries; I did see a few very disturbed casino patrons hustling through the halls, avoiding eye contact at all costs. Treyn told me that they are very proud that after five years of events and thousands of attendees that the conflicts that have arisen have never escalated beyond talking.

Perhaps furries aren’t your cup of tea. I think they would be the first to admit they are a little strange. But the real goal of the convention is to give people an opportunity to live out their furry side. The GSR has expressed that they greatly enjoy hosting BLFC and plans for 2018 have already begun. At the very least, BLFC seems good for Reno and Reno seems good for the BLFC.

As an end note, this is a private convention and is closed to anyone who does not register for the event. As a member of the press I was given total access to the entirety of the event with the only stipulation that I asked for permission before taking anyone’s photo. Thanks to Treyn and event organizer Tyco for giving me this level of access to their convention.