River Festival On as Scheduled Despite Fast-Flowing Truckee 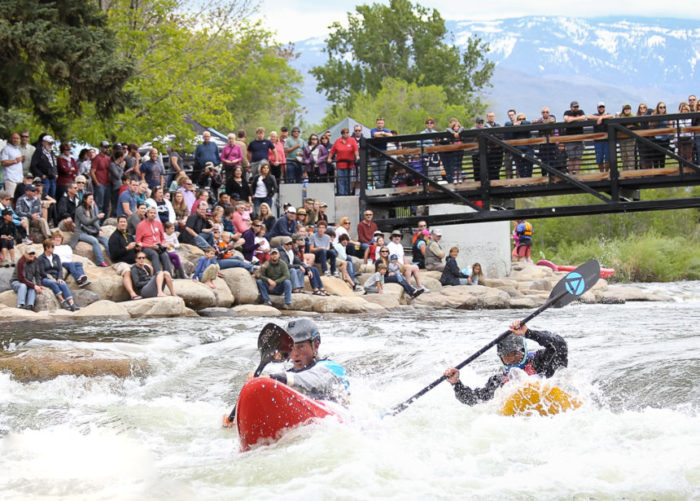 City officials are warning residents to stay away from the fast-flowing Truckee River, but the annual Reno River Festival is proceeding as scheduled.

In fact, extreme conditions in the river caused by this year’s record-breaking winter are drawing notable whitewater athletes to this year’s festival.

Competition Director Noah Fraser said that “world-renowned athletes are flocking to the West Coast because of our record water year. These kinds of conditions are what they live for. They are fired up to take on the Truckee River Whitewater Park.”

At a flow rate 5,000 cfs, about five times greater than at last year’s competition, this year’s river conditions are the most extreme in the festival’s history.

The event will showcase more than 60 of the world’s top whitewater athletes. Professional men, women, and juniors will compete for more than $10,000 in Freestyle, Boatercross, and Slalom categories.

The festival is Mother’s Day weekend, Saturday, May 13 and Sunday, May 14 in downtown Reno’s Wingfield Park.

City spokesperson Matt Brown said, “The Reno Fire Department’s river safety advice is based on current conditions only and is not meant to deter people from attending the Reno River Festival. Public safety remains the City of Reno’s highest priority.
“The city supports special events and is looking forward to another successful, safe Reno River Festival,” he added.
[clickToTweet tweet=”River Festival On as Scheduled Despite Fast-Flowing Truckee” quote=”River Festival On as Scheduled Despite Fast-Flowing Truckee”]

PHOTOS: River fest draws crowds, even without the kayak competition