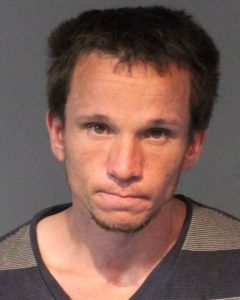 On May 17, 2017 local media began showing the video of this residential burglary. Shortly after it airing, the Reno Police Department began receiving information on a possible suspect. A local retail store identified the suspect as he had previously been in their store.

On May 19, 2017 the suspect turned himself in on an unrelated warrant. He has now been charged with multiple felony charges including residential burglary, theft and obtaining money under false pretenses.
Arrested:

—
A south Reno home was broken into on May 10, but the suspect was caught on video.

According to the Reno Police Department, “The suspect tiptoed through the house while the residence were asleep.  The suspect stole items from inside the house and a high dollar mountain bike from the garage.  The home owners have surveillance cameras and have released a disturbing video of the suspect walking through their house.”

Watch the video below.

The police are seeking the public’s help in identifying the suspect.