UNR Observes Earth Day Ahead of Main Event This Weekend 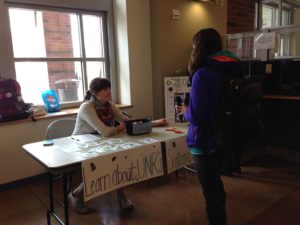 Several student groups and local organizations joined together Tuesday to mark Earth Day at the University of Nevada, Reno, which emphasized environmental literacy.

The event was held in the Joe Crowley Student Union, where educational stations were set up.

UNR senior Hannah Richardson worked a table for a sustainable marketing class project that contained a guessing game and facts about recycling and water use on campus.  For example, the 6.3 acres of artificial turf for athletic and intramural fields save the university about six million gallons of water per year.

A question on personal water use stumped most students because many didn’t take into account how much is used when flushing toilets, taking showers, or doing laundry, Richardson said.

“How many gallons of water the average person uses per day—a lot of people don’t think it’s as much as it is,” she said, noting it’s 21 gallons per day.

CHOMP, a salad restaurant on the ground floor of the U.S. Post Office downtown that opened recently, was also on hand.  Although it’s in a building constructed in 1934, owner Bernie Carter said it’s energy efficient.

For example, a water heat exchange system is used in place of a heating-ventilating-air conditioning system, operable windows replaced fixed windows and a light emitting diode system was installed instead of traditional lights.

“I thought it was important to talk about how old buildings can be sustainable,” Carter said. “It’s one of the most energy-efficient buildings in our community.”

Earth Day, which is held annually on April 22, began in the United States in 1970 and went global in 1990. It’s held to demonstrate support for environmental protection. 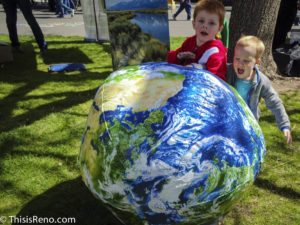 Earth Day will be marked locally from 11 a.m. to 6 p.m. April 23 at Idlewild Park, 1900 Idlewild Drive in southwest Reno.  This year’s theme is “The natural world, clean and green technologies and many cultures.”  Almost 400 exhibitors are scheduled to be in attendance. Entertainment, games and activities are also planned.  Admission and parking are free, although those attending are encouraged to carpool or take public transportation. Details: http://www.renoearthday.org