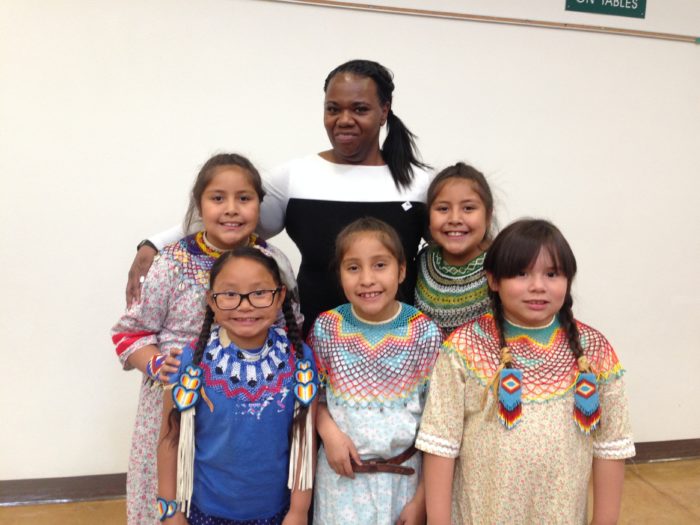 The Washoe County School District Board of Trustees heard a report on the Title VI Indian Education Program during its meeting Tuesday at Jesse Hall Elementary School in Sparks.

Trustees hold a board meeting annually at a school close to tribal land.

Prior to the meeting in the school’s cafeteria, trustees held a meet-and-greet with Paiute instructors and their students, Eagle Wings Dancers and Young Chief Singers. The Reno-Sparks Indian Colony also provided a cultural meal.

Tiffany Young, coordinator for equity and diversity, and Chelsey Solemsaas, Indian education specialist, put together the presentation. It expanded on the ongoing relationship between the district and the Pyramid Lake Paiute Tribe, Reno-Sparks Indian Colony, and Nevada Urban Indians.

There are 944 American Indian students enrolled in Washoe County schools this year, which makes up about 1.5 percent of the district’s population. About two-thirds of them qualify for free or reduced-price lunches, according to district data.

“It’s not one specific thing (that increased graduation rates among American Indians),” Young said. “There’s been stronger collaboration around education.”

In effort to cover a $30 million to $40 million financial deficit, the district’s human resources staff launched a Special Early Separation Incentive Plan this month, which could be utilized to avoid potential layoffs and to obtain salary savings.

As of this week, 62 certified employees requested to retire under this plan, which would save about $1.5 million. Also, in the event the district has a surplus of teachers, vacant positions created by the plan could be utilized for displaced employees.