Roll of the Dice: Checking Out Reno’s Premier Board Game Parlor

Owned and operated by Jeff Carter, The Glass Die is a new bar specializing in brews and board games. Coming off of a successful Kickstarter campaign, they’ve been open for about two weeks now with a soft launch on April 1. The money raised was used to expand their game library, gift a custom mug and t-shirt, and throw a party for their supporters.

The venue is pretty hard to miss: it’s located in a giant metallic building on 675 Holcomb Ave. 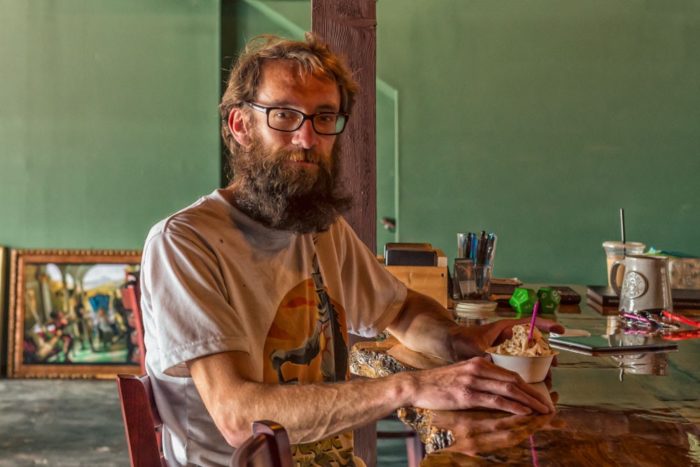 This is Jeff. He came up with the idea for The Glass Die a few years ago while he was a firefighter.

“You have a lot of time to think about things when fighting fires.”

It was nothing more than a concept at the time, and he had a few more years to noodle around with the idea before he saw it in action. Heading to Emerald City Comic Con in 2015, he happened upon The Critical Sip in Portland. Seeing patrons kick back with some brews and board games, he thought, “Why not Reno?” The important thing to him was to have the game experience be the focus, rather than an afterthought. He’s an avid gamer after all, and he’s even worked on creating his own firefighting card game.

Fast forward a year and Jeff is telling his friend, Mike Mechanic, about the idea at a party. Jeff had been a firefighter for nine years at this point, and having had some extra time to think through the details of what it would be like to be a small business owner (a first for Jeff), he was ready to commit. Luckily for Jeff, Mike knew of a great spot that was available.

You’ll often see Jeff walking around to make sure everyone is comfortable. He makes sure your drink is full and he’ll also give helpful advice if you’re playing a game for the first time. After all, he’s played through most of the games at least once, and some of them have some pretty extensive rules. The rest of the staff are just as friendly, and they always seem to be happy to talk shop about whatever game you’re into.

After a few hours of playing with, or against, your friends, you can relax with a drink from the 12 beers they have on tap. That number is important for a particular reason. Tying into the theme of board games and dice rolls, you can roll a 12-sided die and let fate decide which beer to drink from their selection (with $1 off of course). 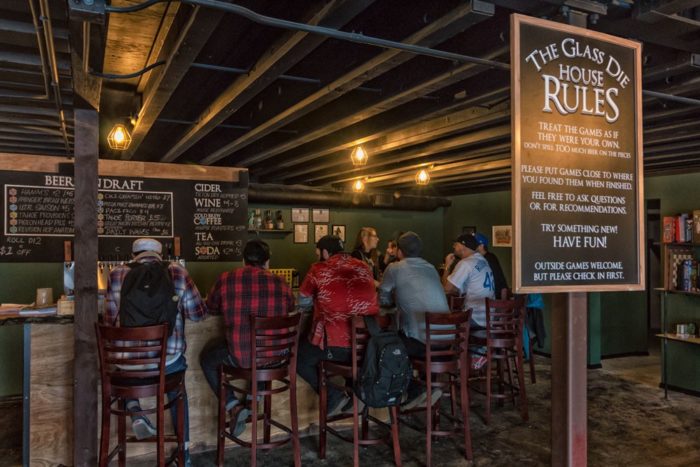 Not a beer drinker? No problem. They also have cider, wine, tea, and soda. Oh, and locally roasted cold brew coffee, served on nitro. If you’re hungry, there are plenty of food options within walking distance of the bar’s Midtown location. Some food and drink will probably be necessary in mending all the friendships ruined through games like Catan and Scythe (both of which are available). All the games are free to play. They just ask that you treat them as if they were your own.

What separates The Glass Die from other bars with board games is the selection they have available. From classics like Clue and Connect 4, to Kickstarters like the aforementioned Scythe, you’ll never run out of new games to try. Don’t see something you like? Well, you can always bring your own. With the help of his friend Mike, Jeff created a number of beautifully handmade wooden tables that are large enough to fit all of your gaming needs.

Jeff is looking to continue expanding his already impressive library with even more board games. His selection leans towards strategic Eurogames for now, but eventually he’ll have more games that can accommodate solo or group play, across a broad spectrum of difficulty levels.

The Glass Die is open daily from noon to 11 p.m. Check them out the next time you want a nice place to hang out with friends and play some board games.