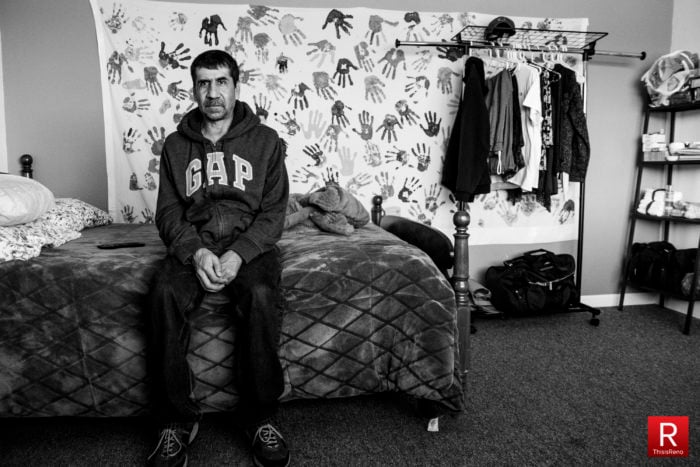 According to J.D. Klippenstein of ACTIONN, David was granted a six-month stay of deportation this past weekend. A celebration potluck is scheduled for tomorrow at 6 p.m. at the Unitarian Universalist Fellowship of Northern Nevada.

Sunday marked the third week of sanctuary for David Chavez-Macias. He’s been living inside of the Unitarian Universalist Fellowship of Northern Nevada (UUFNN) while facing possible deportation after being a Reno resident for 31 years. Both ACTIONN and members of UUFNN have rallied for him to be able to stay in Reno.

I spoke with David Chavez-Macias via Araceli, a translator provided by ACTIONN, about his experience living in the church.

After walking through the dark hallways of UUFNN’s office building, we arrived at a fairly small room lit only by a few windows with shades half drawn. David Chavez-Macias and his wife sat quietly against the wall in small office chairs. The total absence of noise made the room seem even more oppressive.

Chavez-Macias rose to shake my hand and say hello. At 53 years old he has a light build, an almost frail appearance, and a very cautious personality.

I asked him how he was doing. “Frustrated” he said, explaining that he hasn’t heard anything regarding his possible deportation. Multiple times he paused to express his appreciation to everyone who has helped him and made it clear that, “this isn’t like prison.” But, he said that being so restricted has been difficult and stressful. He just wants to return home.

I enquired as to how he passes the time. 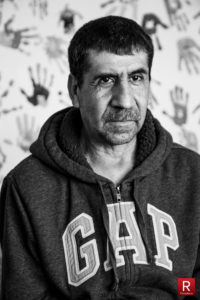 “I walk around sometimes,” he said. Confused, I asked him where he would walk to. He gestured to the room we were standing in explaining that he would walk around inside the room. He added that he missed the freedom to go outside.

When the UUFNN church congregation announced that they would extend sanctuary to Chavez-Macias, part of their pledge was “We will do all that we can as a religious community to make you feel welcome, comfortable and safe. While respecting you and your family’s need for privacy.” I asked him how he felt he and his family’s privacy was being treated. Other than two hours on Sunday, he explained, when kids come into the building while their parents are at mass, they have total privacy. He also gestured to a door with a sign that read private, beyond which is a small room that had been converted into a bedroom for him.

Chavez-Macias explained that his family has been free to come and go, and his wife was visiting during our interview. His three daughters and son visit daily bringing food and conversation. His children are in their twenties and they all work in the Reno area and have been paying for his food, rent, and medical expenses. Chavez-Macias also said that Rev. Neil Anderson stops by once a day to make sure he is alright and to see if he needs anything.

It was while discussing his family that Chavez-Macias became more open and animated. He talked about bringing his family here in 1995 and how Reno is his home.

The only other visitors included a nurse who came by once a week and a doctor that visited occasionally. Chavez-Macias suffers from Marfan syndrome which requires weekly checkups. Marfan syndrome affects, among other things, his arteries. He has already undergone three major surgeries, in 2002, 2004, and again in 2008. 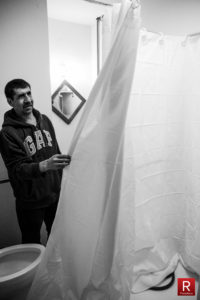 Chavez-Macias shows the portable shower set up for him in the church’s bathroom. Image: Ty O’Neil

Chavez-Macias told me that he owed his life to the US, adding that if he had been living in Mexico he would have died already. Recent tests have revealed that another major artery is leaking blood. While not an immediate threat, it may require surgery at a later time. He was fervent that he owed his life to the US and that it was part of why he wishes so badly to stay. He added that he asked for God’s help to stay in Reno.

I asked if he would be willing to show me his living accommodations, he first led me to his private room. A small couch sat against one wall barely fitting below a window. On the other wall was a bed that was squeezed between the wall and the door. A small rack of clothes and a book shelf concluded the room’s accoutrements. While the UUFNN took great efforts to accommodate Chavez-Macias, it is a very small space in which to spend so much time. He then showed me through the kitchen and to the restroom where a portable shower had been installed. He explained that you had shower in a certain way to keep the water from flooding out into the bathroom and hallway.

The UUFNN has clearly made, and continues to make, an effort to accommodate Chavez-Macias to the best of their abilities, but his confinement is still having its effects. I finished by asking him what outcome he would like to happen if he could choose. He said simply that he just wants to return home and to be done with this whole event, adding that he would love a permanent solution but that he just wants to return home.