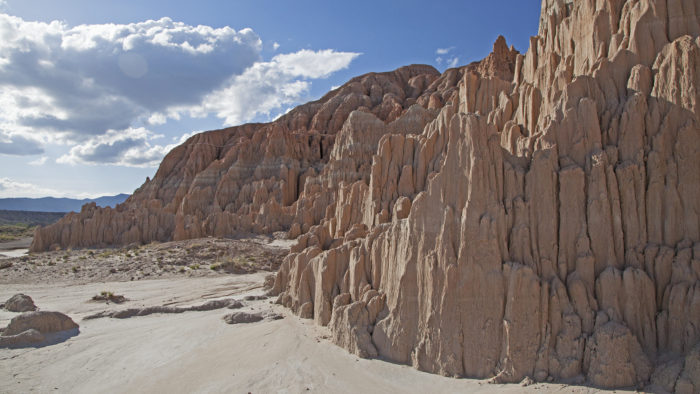 Slot canyons and spring-fed ponds don’t typically come to mind when picturing the Nevada landscape, but both can be found — separately — in the southeast corner of Nevada, in Lincoln County. This rural region also has ghost towns, a fossil site and more.

Lincoln County is about 450 miles southeast of Reno, so if you’re going there, you have to commit to a serious road trip — but one that takes you on the state’s ET Highway (state Route 375) or on the Loneliest Highway in America (U.S. 50) and the Great Basin Highway (U.S. 93). Click here for a map showing routes from Reno to Caliente, a former railroad town and city within Lincoln County.

Five state parks all are clustered around the Lincoln County city of Caliente, home to about 1,130 people, according to 2010 Census data. Cathedral Gorge State Park is a favorite because of its slot canyons, formed by the erosion of the area’s soft bentonite clay. Visitors can walk into the narrow canyons or explore the park on a 4-mile or 1-mile trail. Cathedral Gorge has a visitor center that interprets the park as well as all state parks in eastern Nevada, including Kershaw-Ryan State Park. 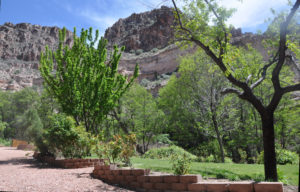 Built around a former 1870s ranch, Kershaw-Ryan sits in a verdant mountain canyon anchored by a spring-fed wading pool and fruit trees. Hike the 1.5-mile Overlook Trail for a view of the canyon from above. Rounding out the Lincoln County state parks is Spring Valley State Park, which draws boating enthusiasts with its 58-acre Eagle Valley Reservoir; Echo Canyon State Park, which has its own 65-acre reservoir; and Beaver Dam State Park.

Like to bike? Head to Beaver Dam State Park for the June 16 49er Gravel Grinder, a 35-mile tour through the park. Or visit Lincoln County in the fall, when the annual Park to Pedal-Extreme Nevada Bicycle Tour takes place. The tour goes through four state parks — Kershaw-Ryan, Cathedral Gorge, Spring Valley, and Echo Canyon, and will take place Oct. 14.

Keep an eye out for more mountain biking opportunities in Lincoln County: construction of the Caliente bike trail system, which will go through Kershaw-Ryan and adjacent land managed by the federal Bureau of Land Management, is expected to begin later this year, according to Patrick Kell of the International Mountain Biking Association.

Nevada has more than 600 ghost towns, according to my colleagues at Nevada Magazine, and Lincoln County has a few. These are former mining towns from the late 19th and early 20th centuries, communities quickly created after the discovery of gold or silver in the area and quickly abandoned after the mines played out. One to check out is Delamar, just south of U.S. 93 on South Poleline Road (Note: a high-clearance, 4-wheel-drive vehicle is needed to negotiate the bumpy road to this ghost town).

Delamar existed from 1890 to 1909, supporting gold mining in the area. In that short life span, the town had a newspaper, post office, opera house and 50-ton mill. Mining eventually ceased, except for a small revival from 1929 to 1934, and visitors today can see the old wooden houses, mine frames, and other remnants of this community.

Not far from Delamar, and just off of U.S. 93, is the Oak Springs Summit Trilobite Area maintained by the BLM. The area has fossil remains of six types of trilobites (extinct marine anthropods) that lived in a shallow sea 500 million to 524 million years ago. Visitors are allowed to collect trilobite fossils in reasonable quantities for personal use. They may not be bartered or sold.

Come on feel the noise: While in Pioche, get a cup of coffee at the Ghost Town Art & Coffee Co., opened by Kelly Garni, a founding member of the metal band Quiet Riot.

Highway 93 brings adventure back to summer