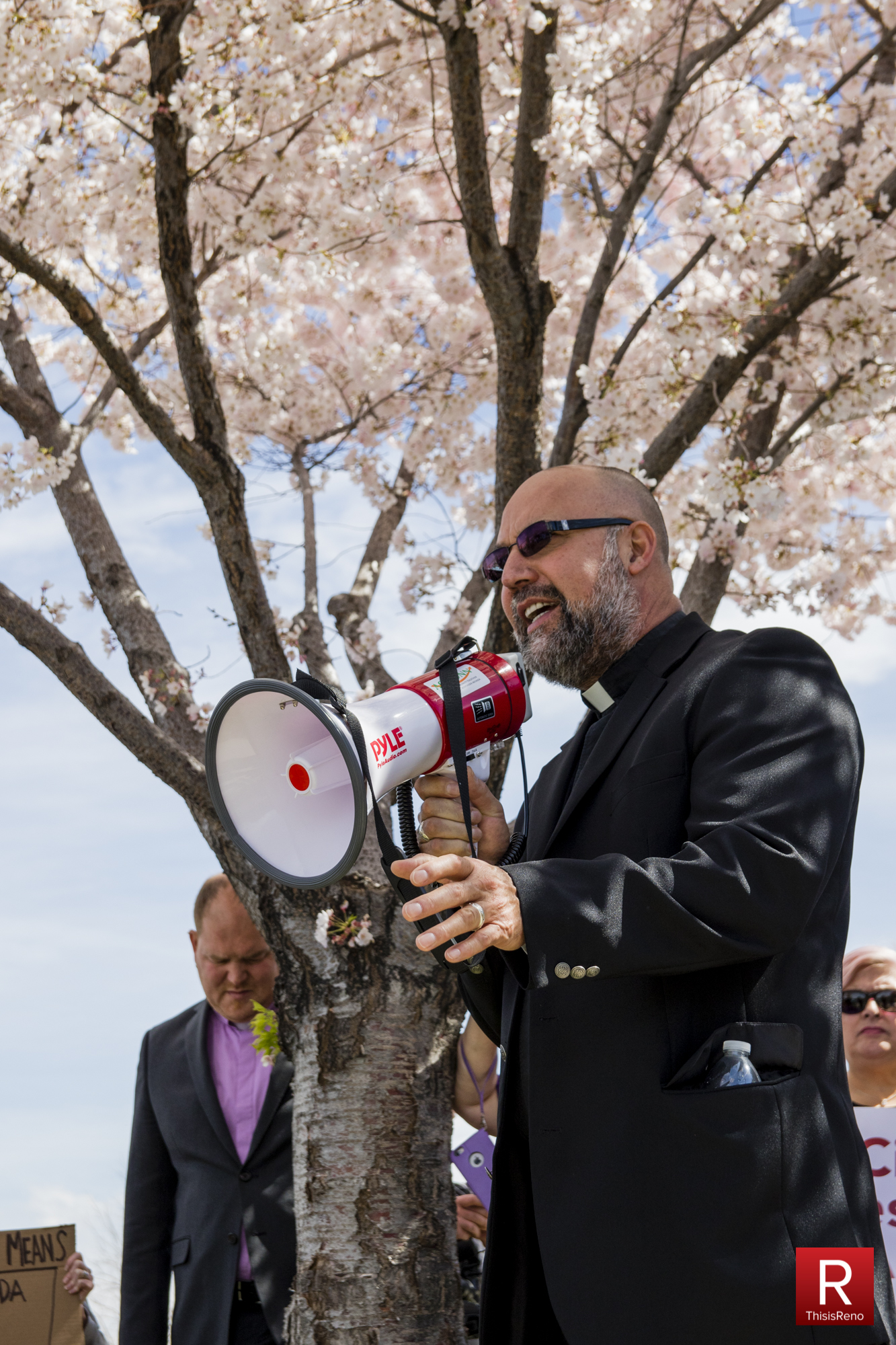 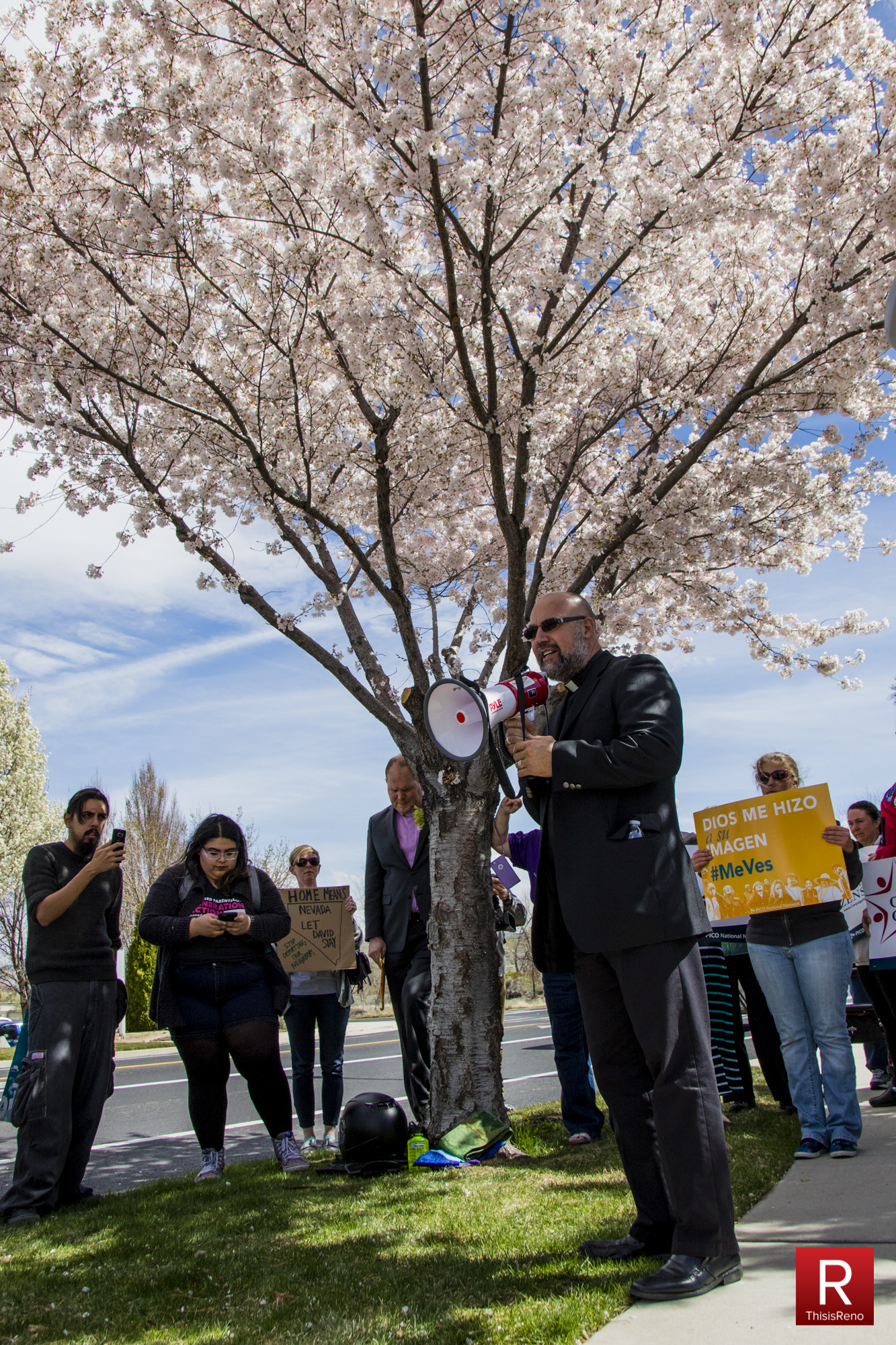 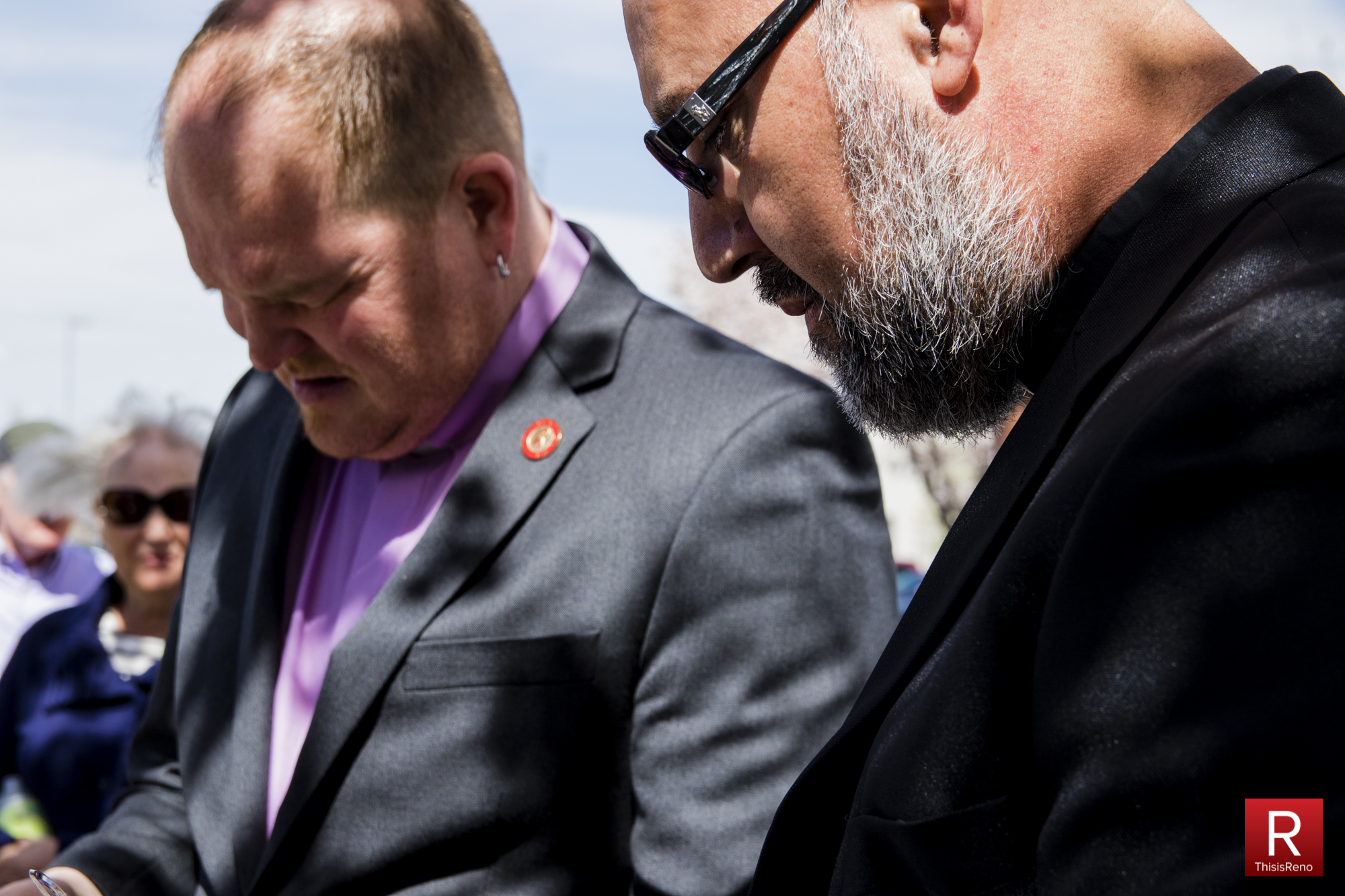 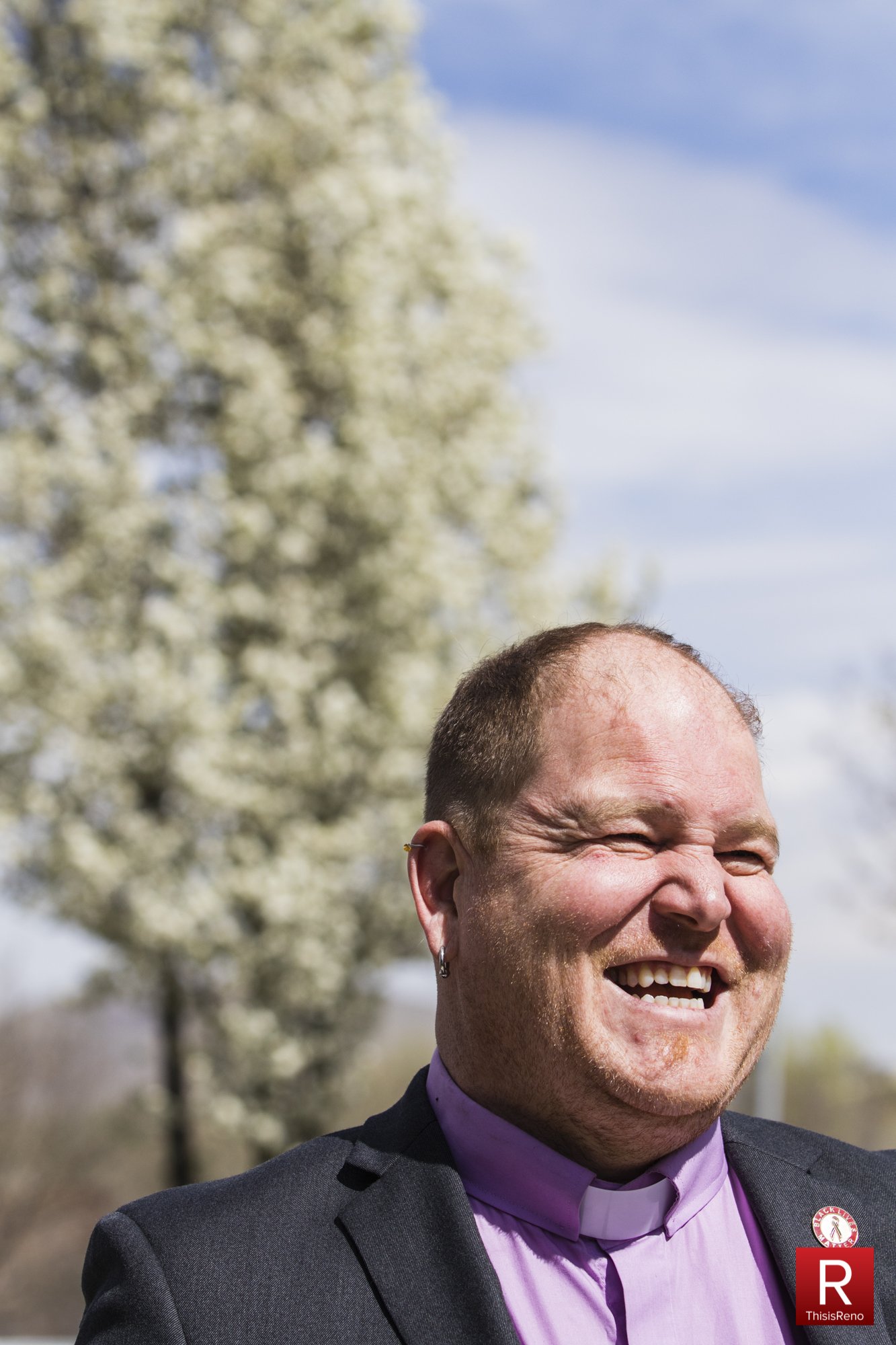 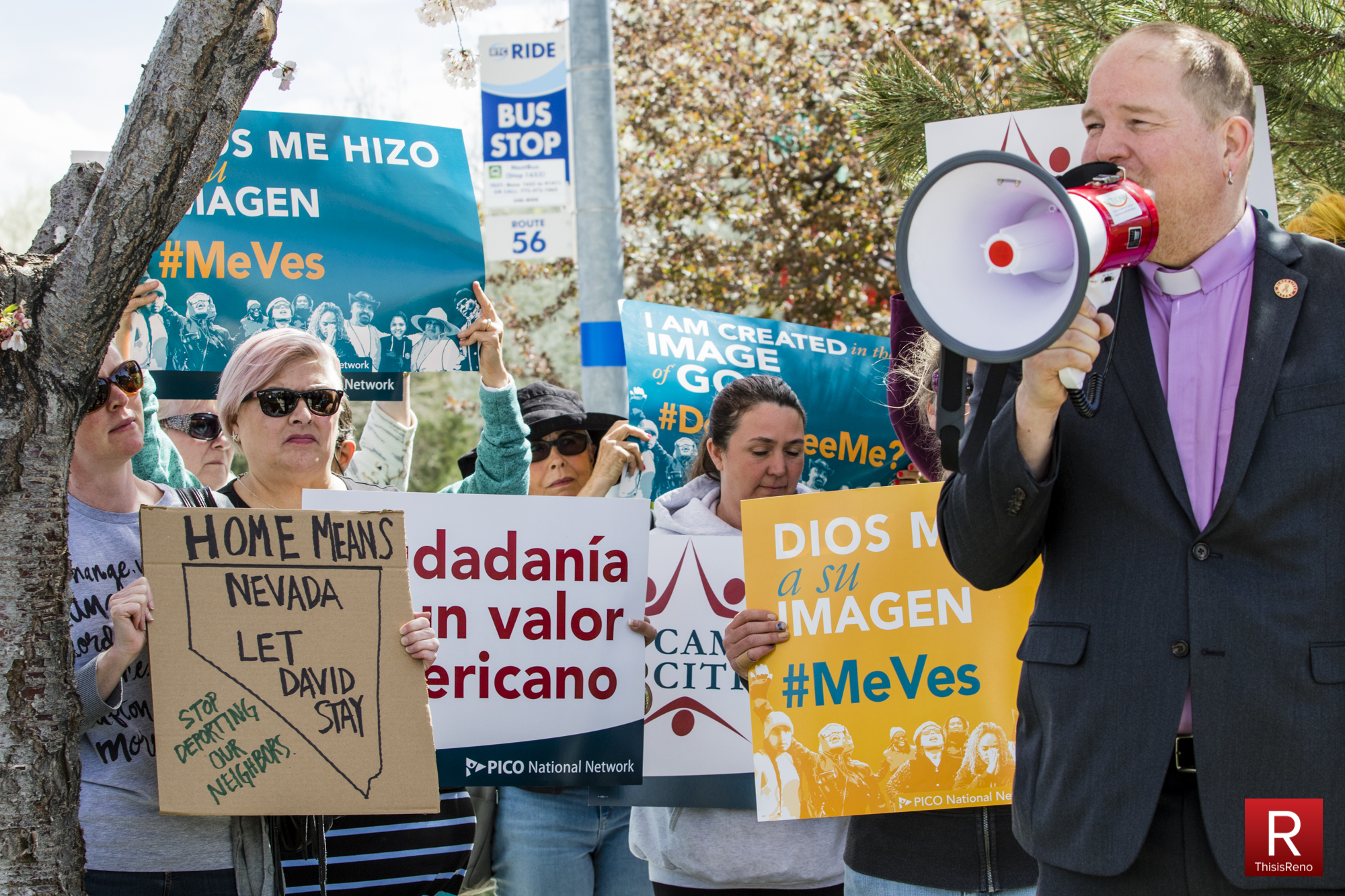 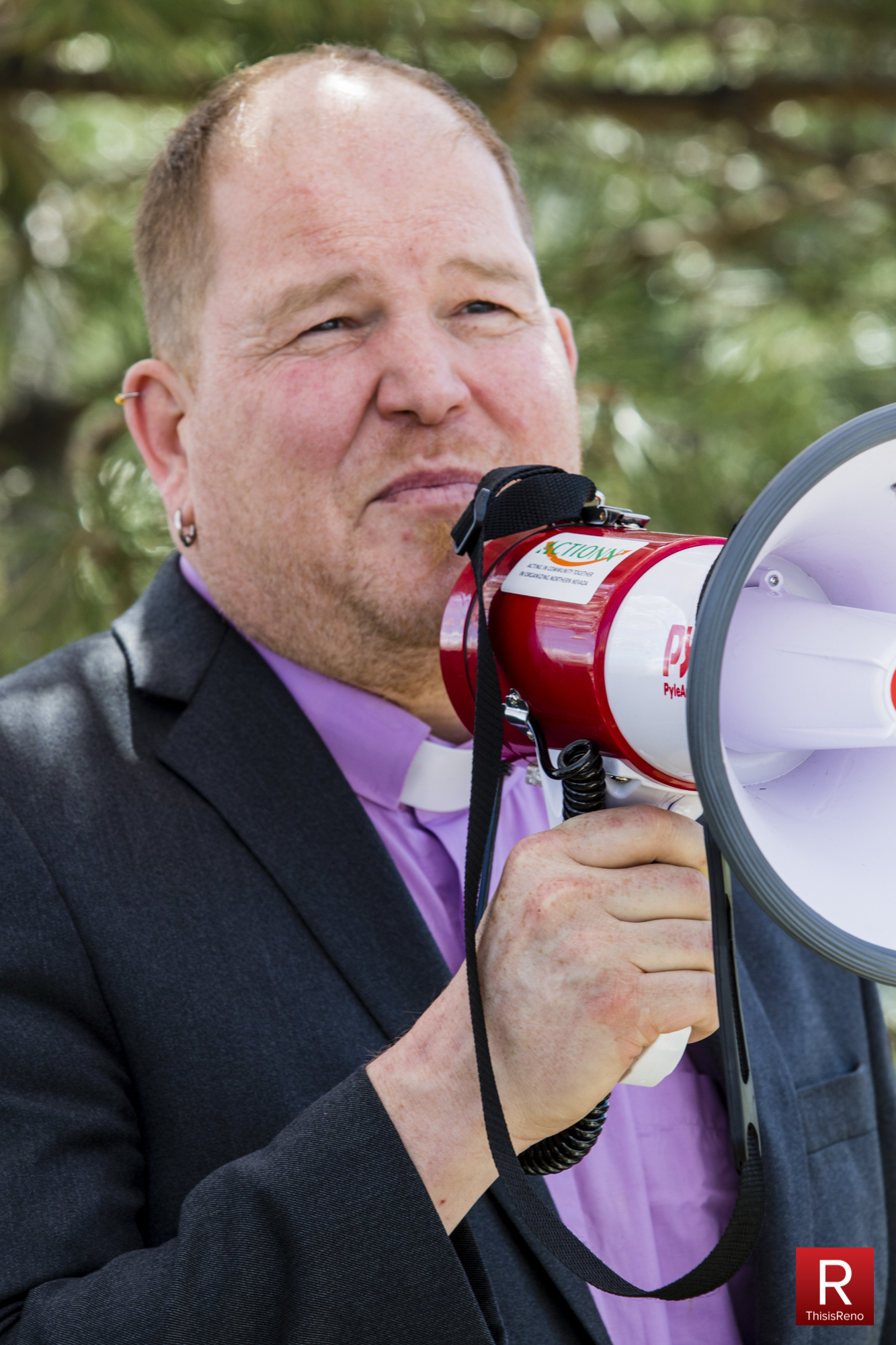 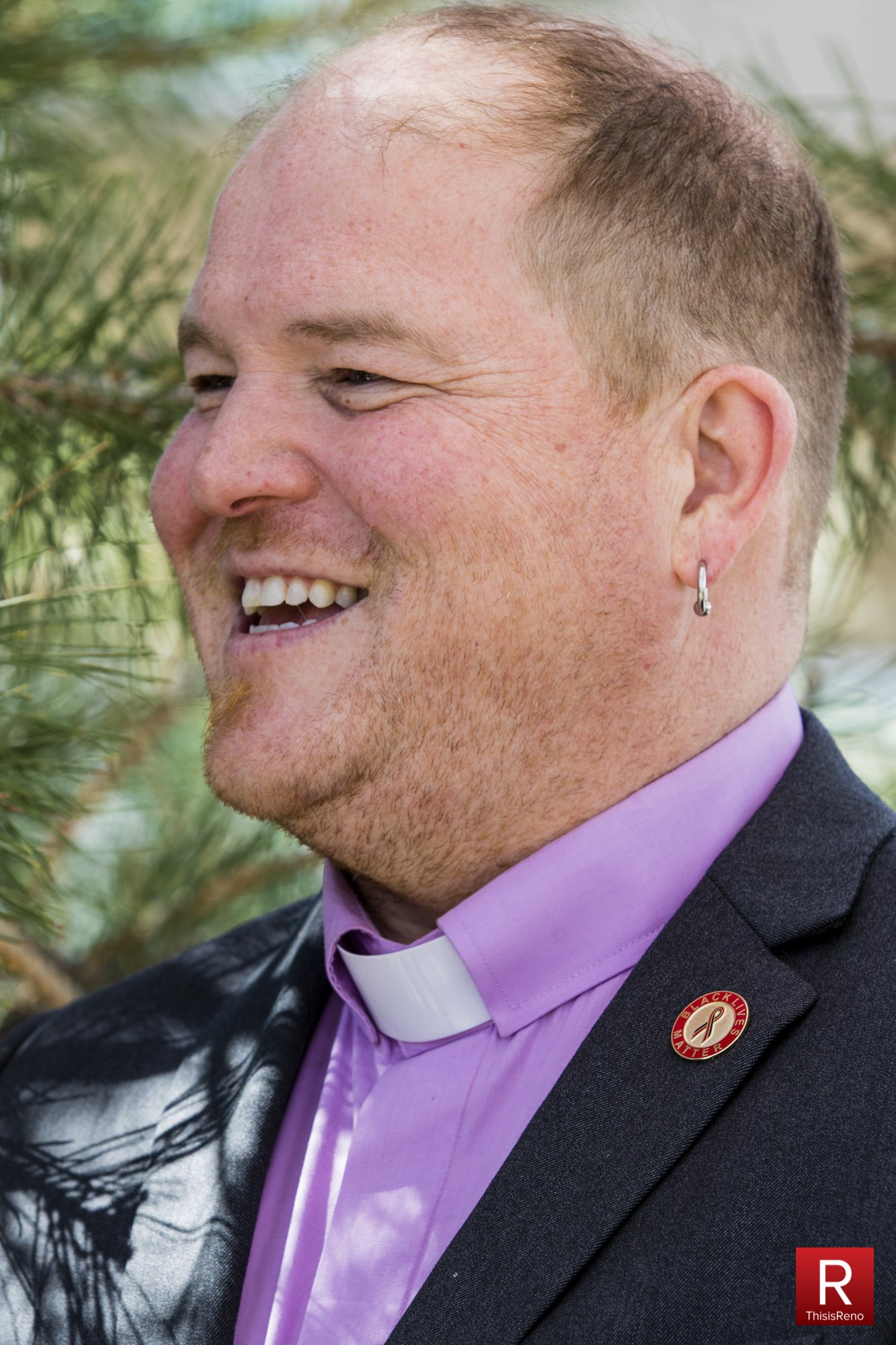 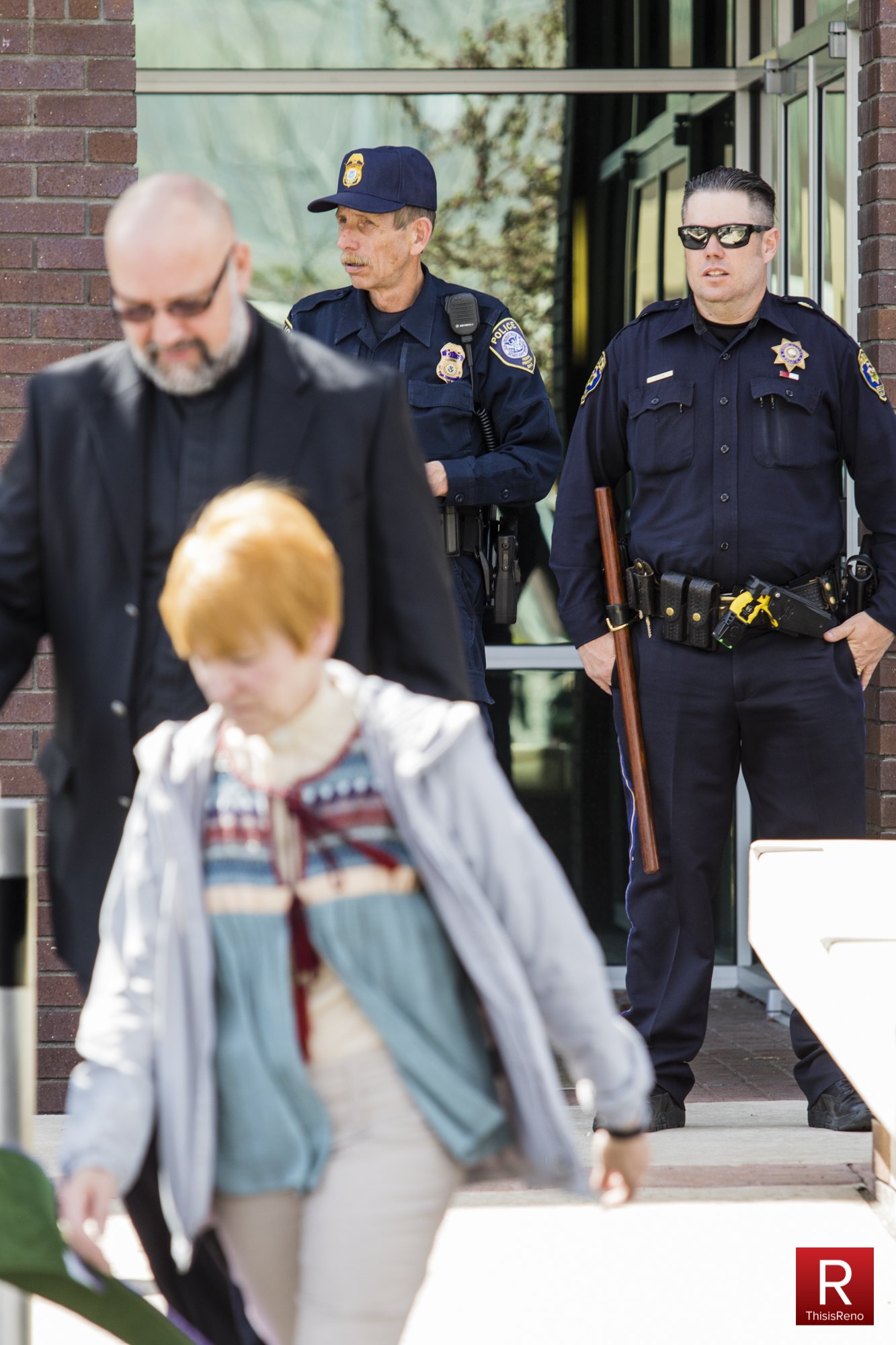 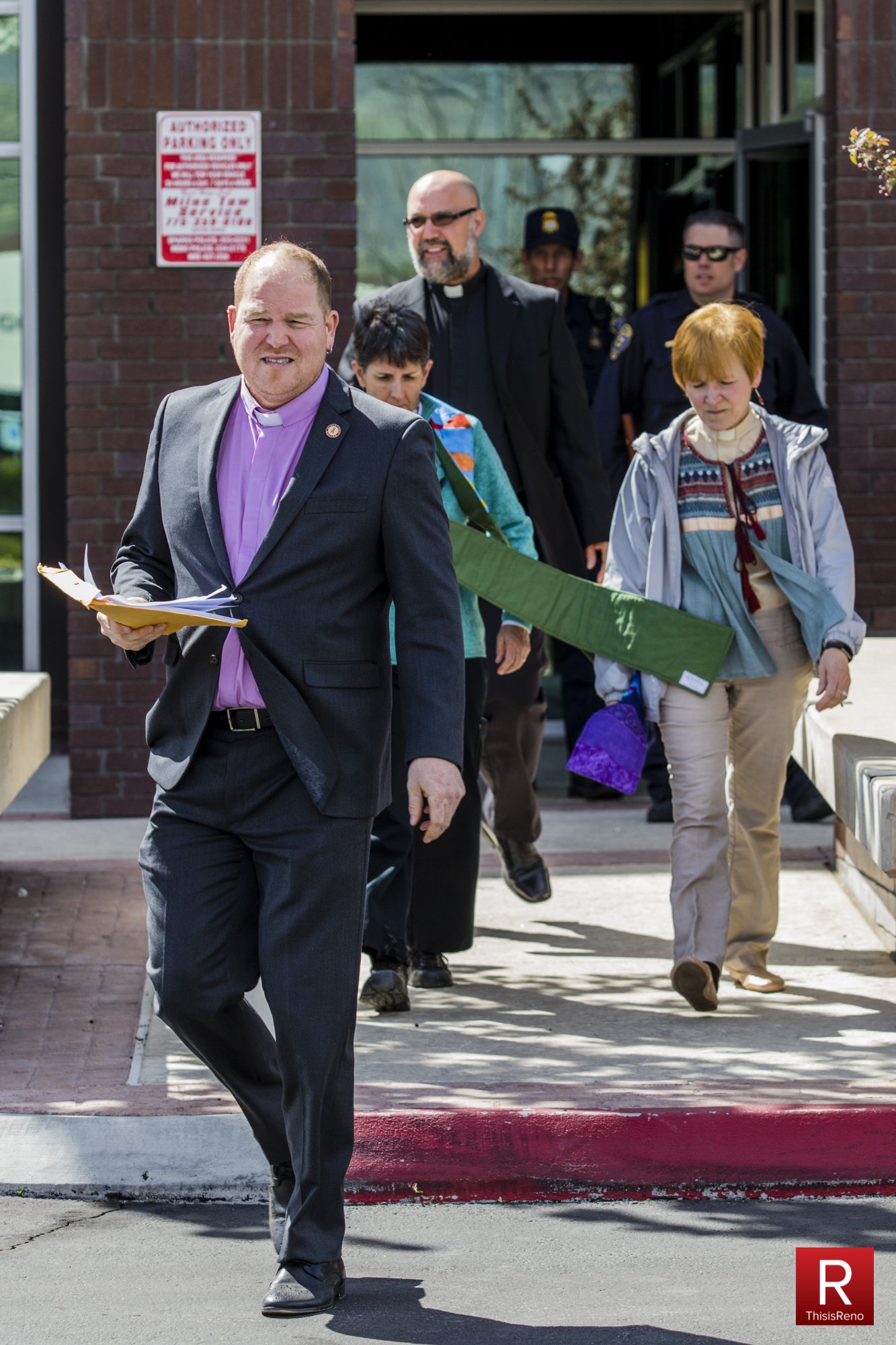 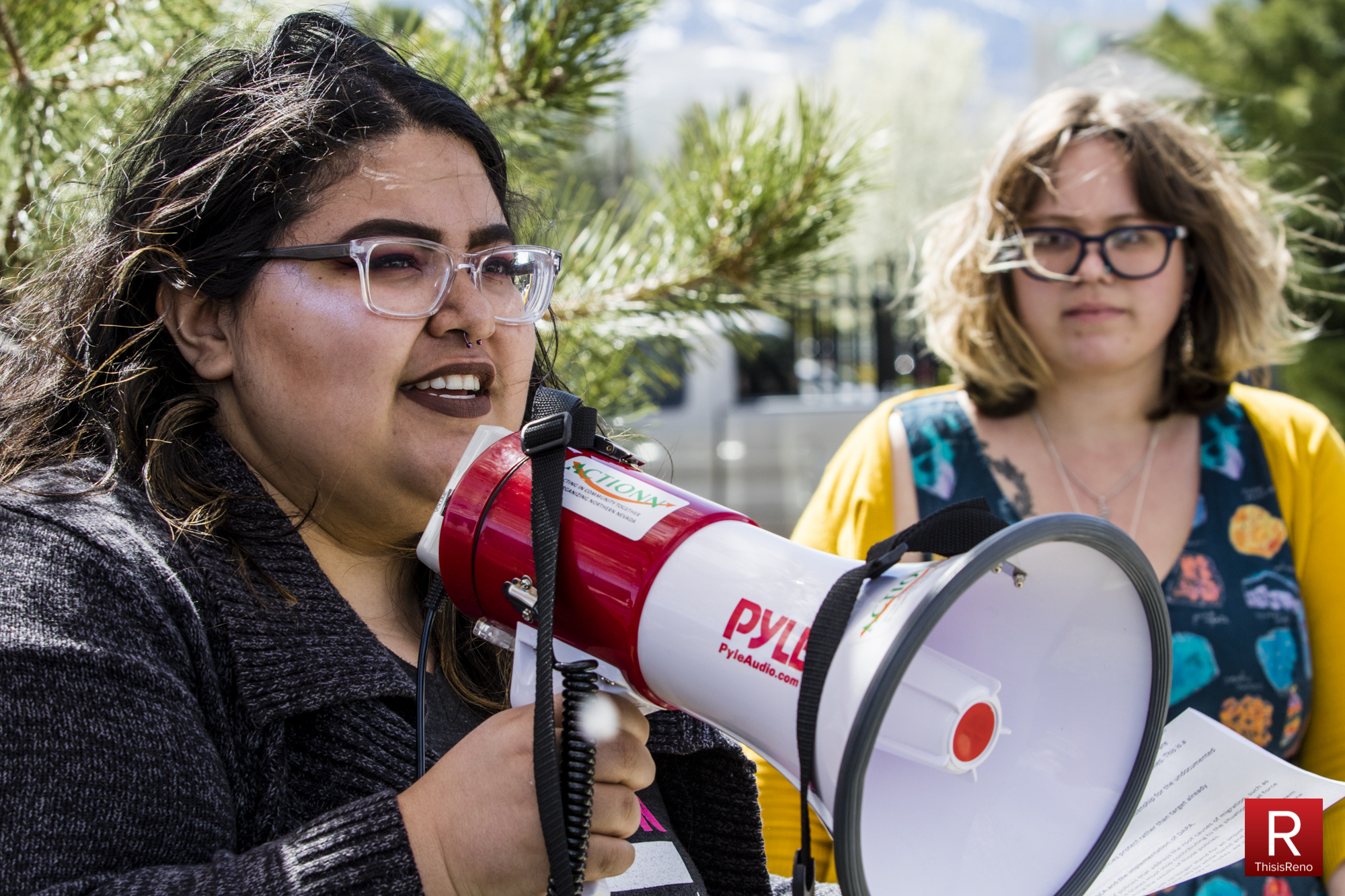 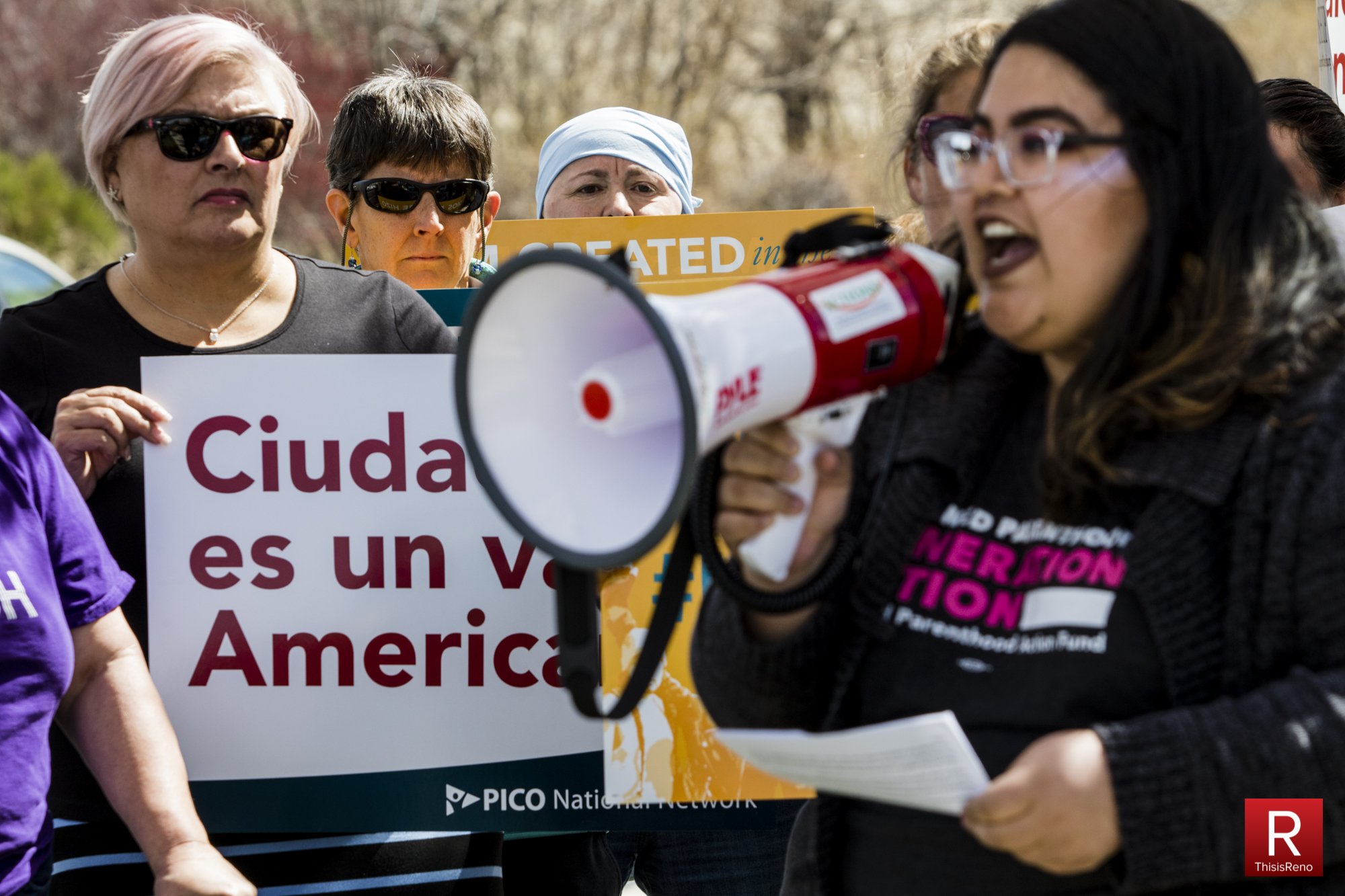 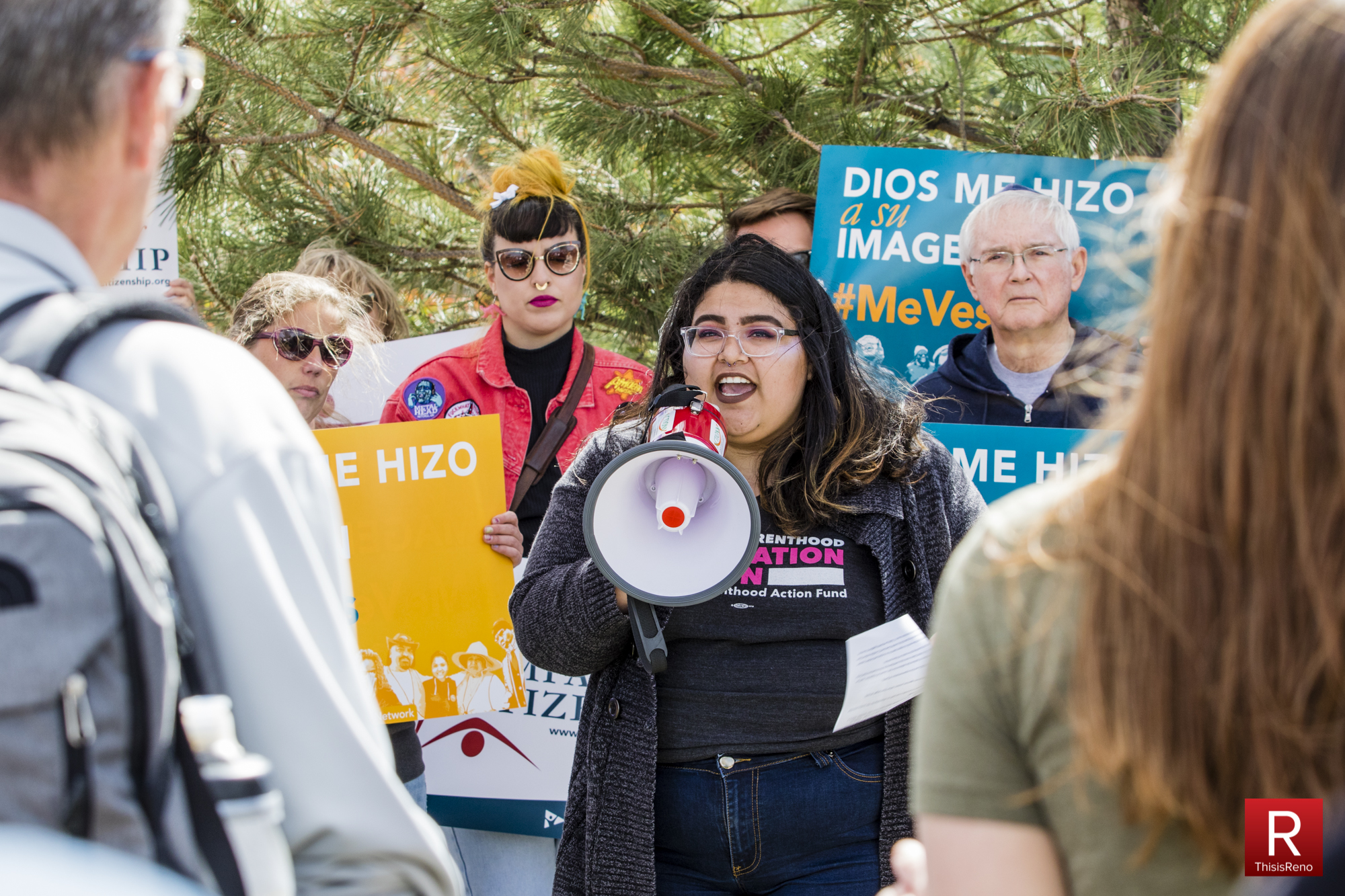 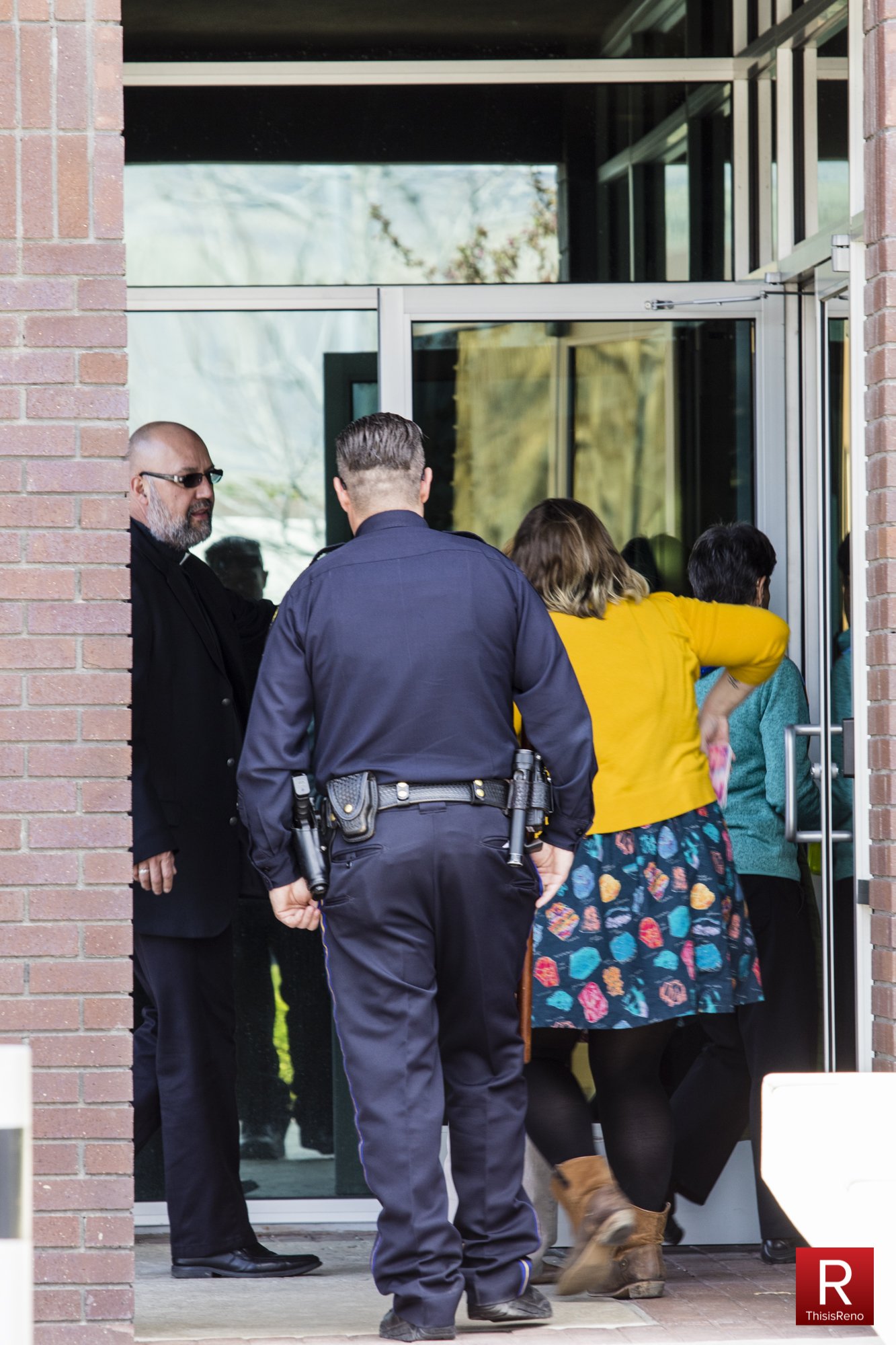 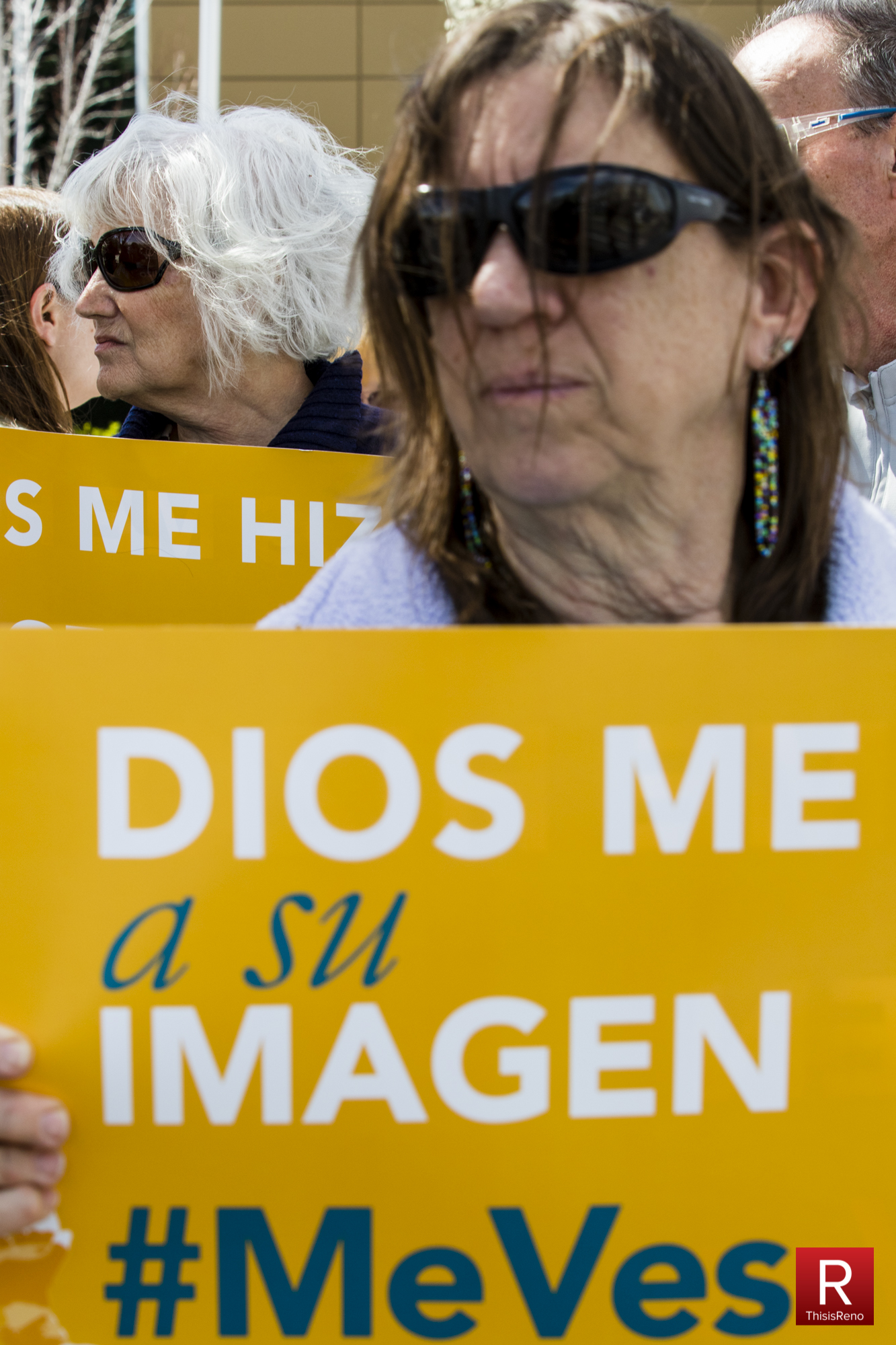 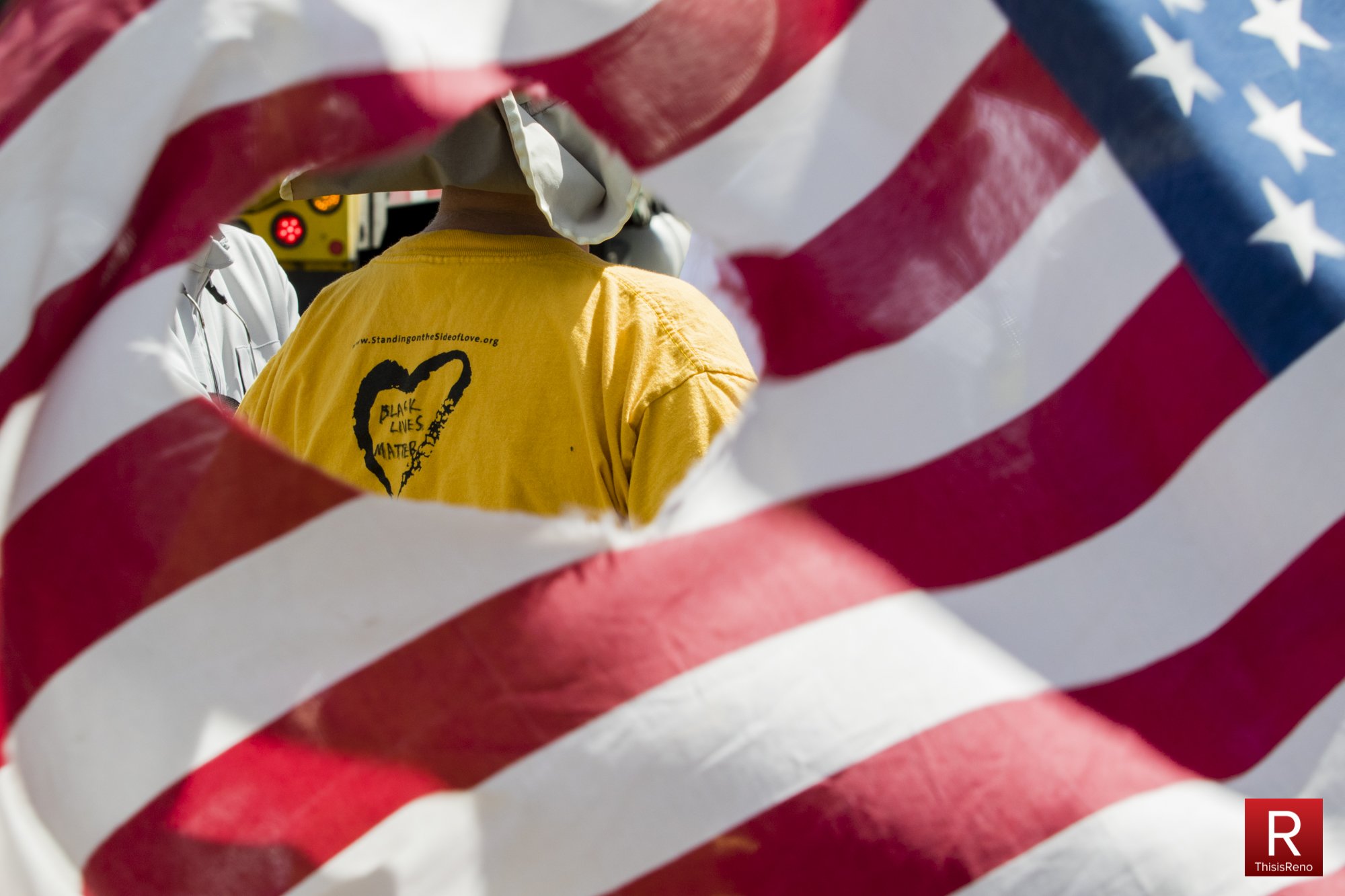 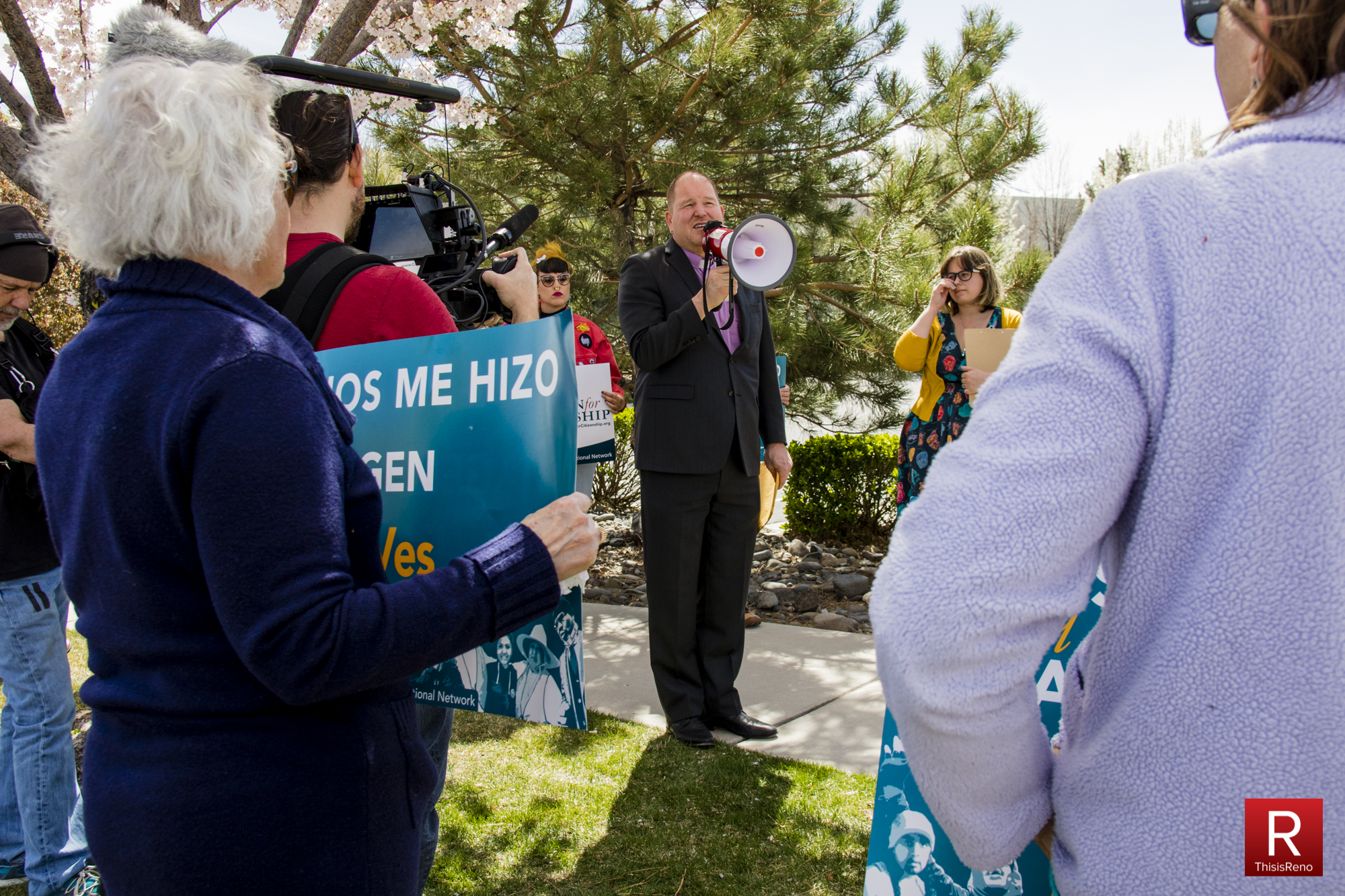 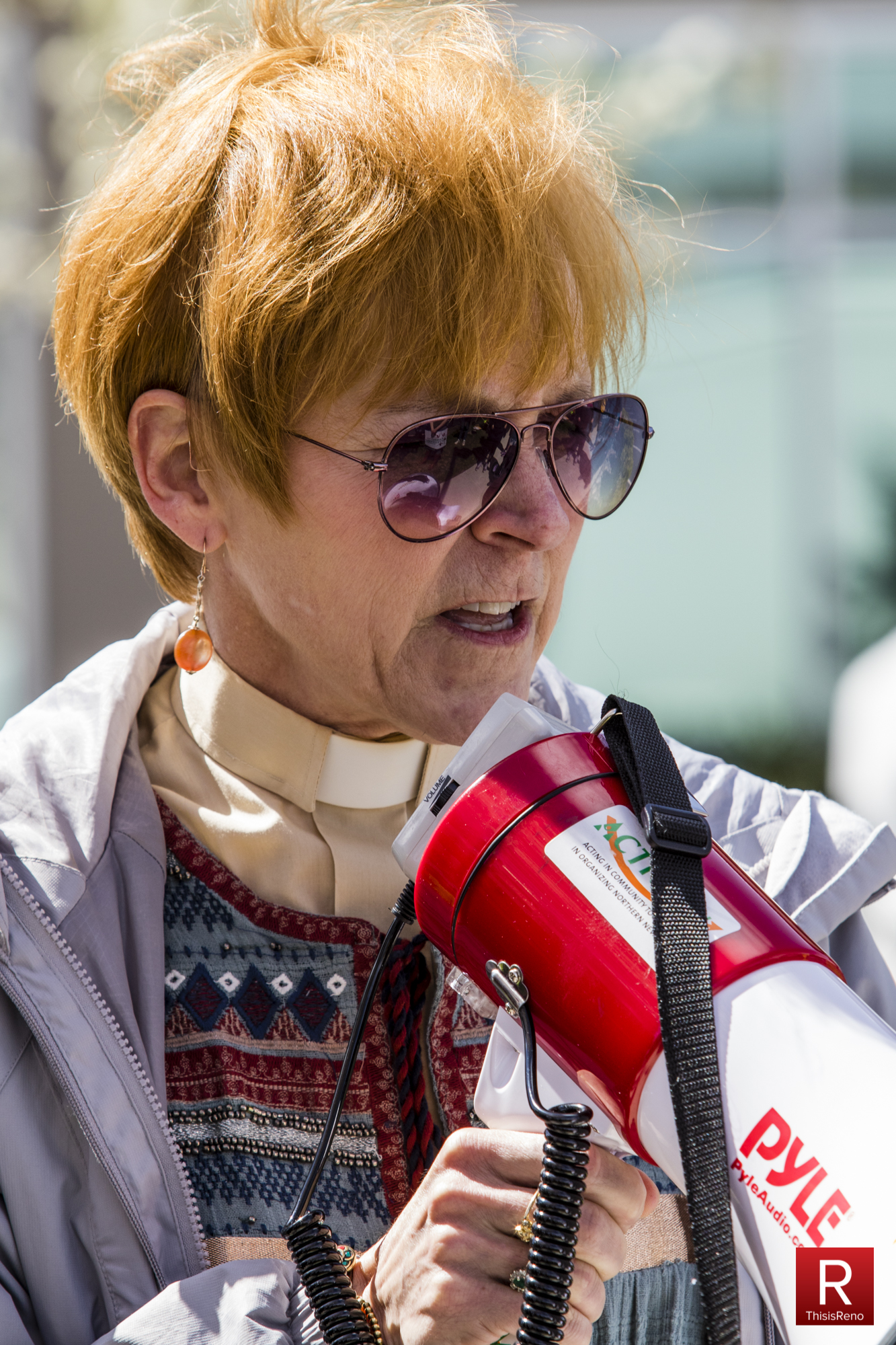 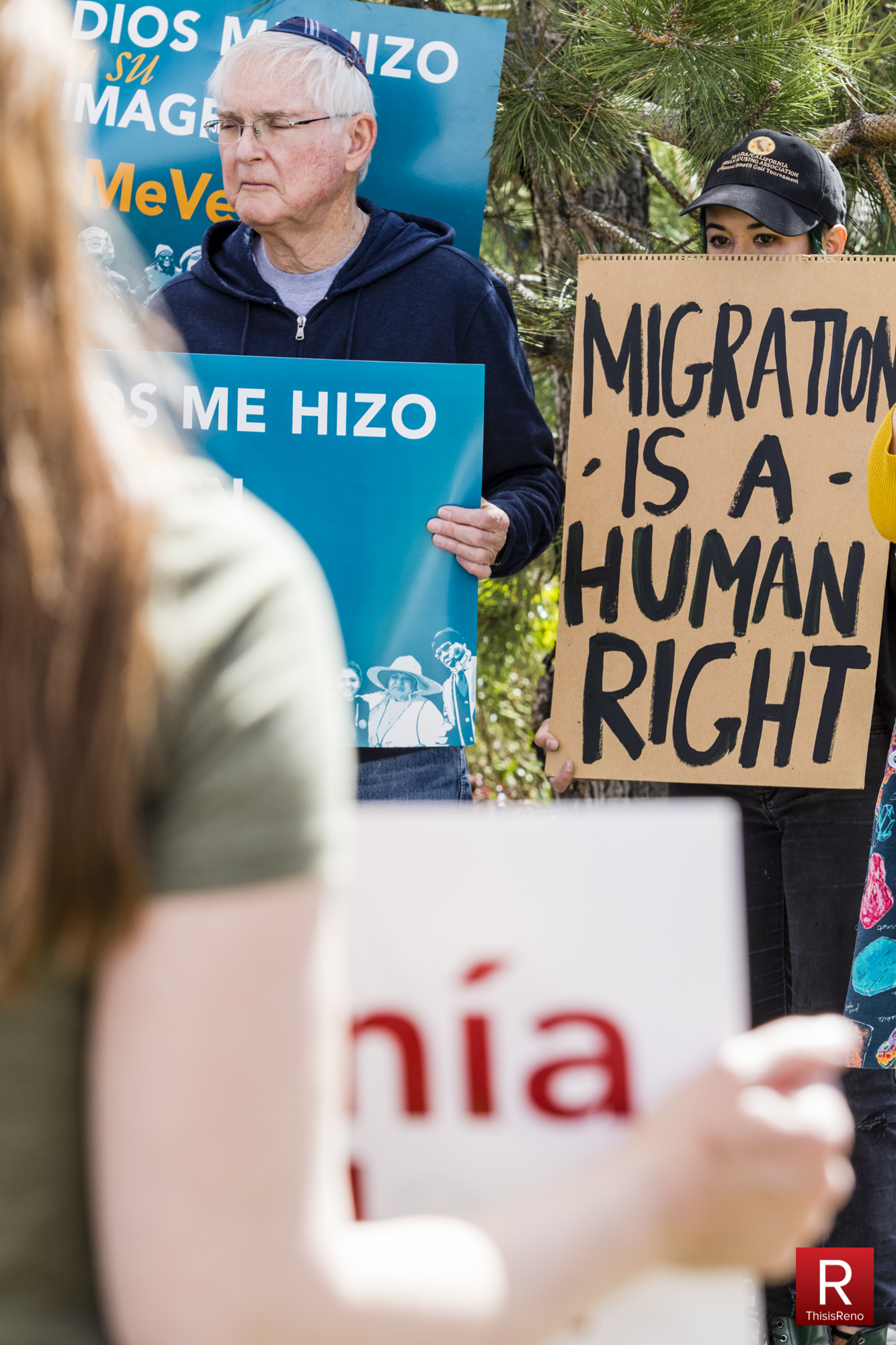 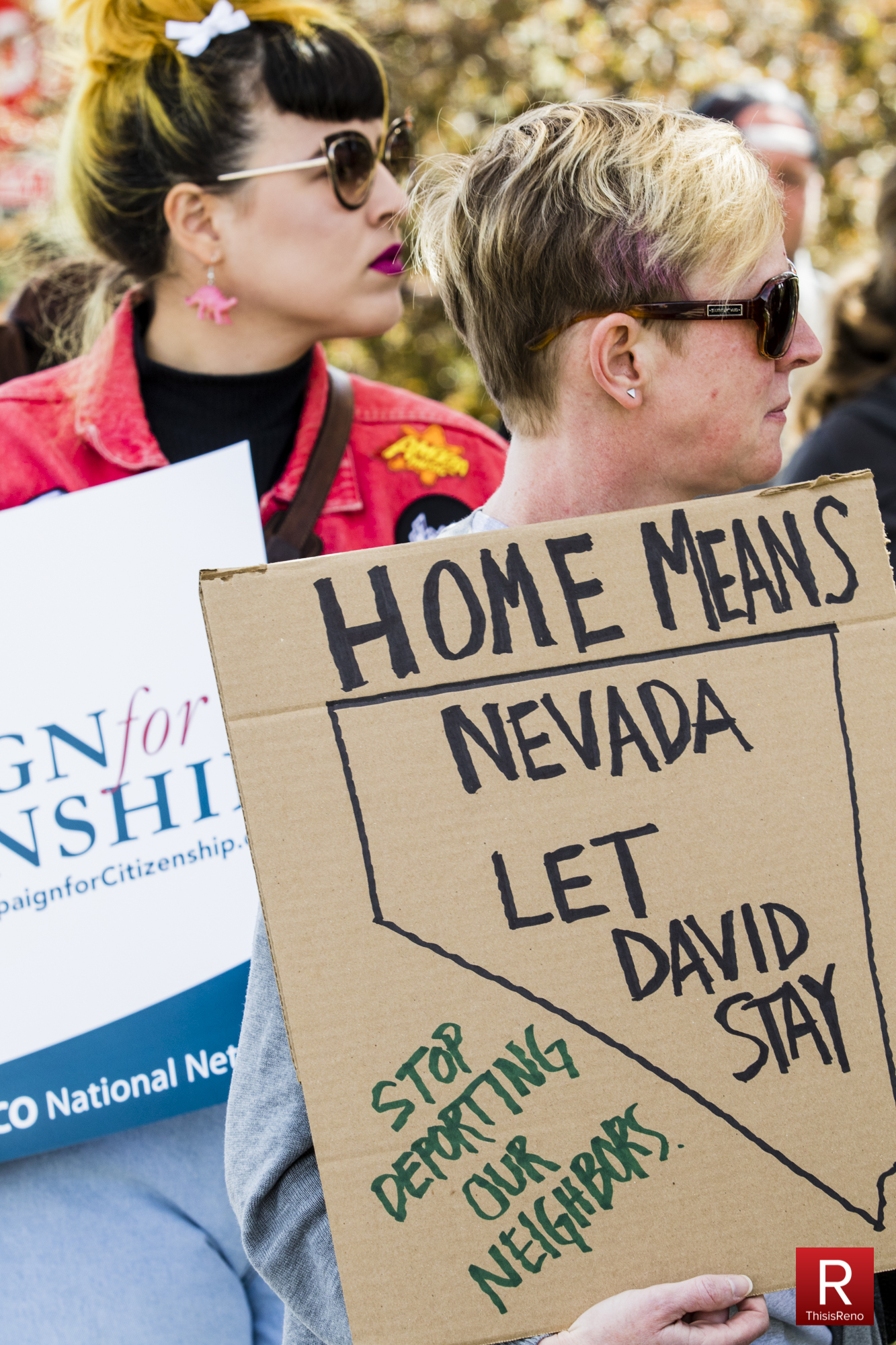 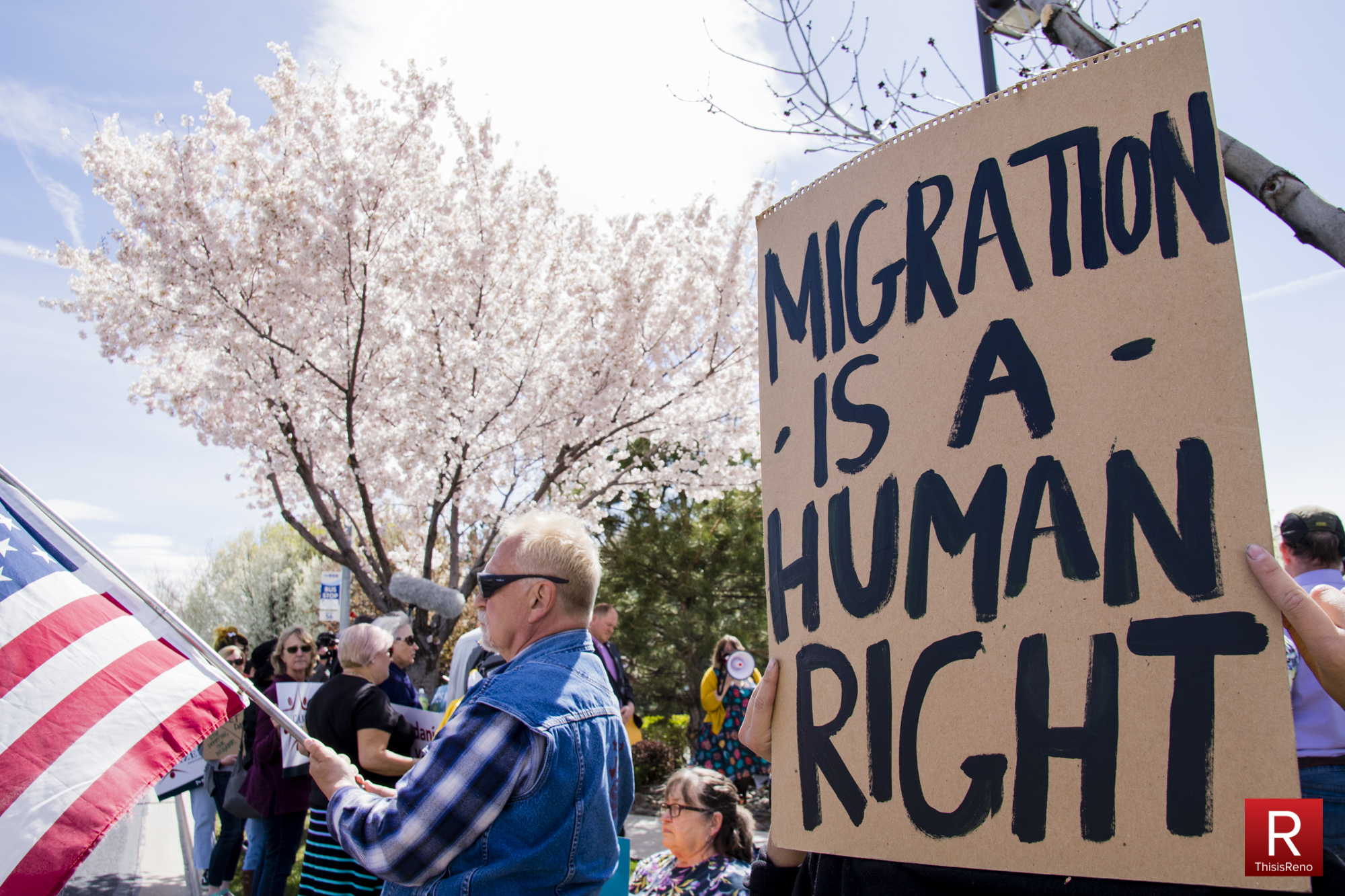 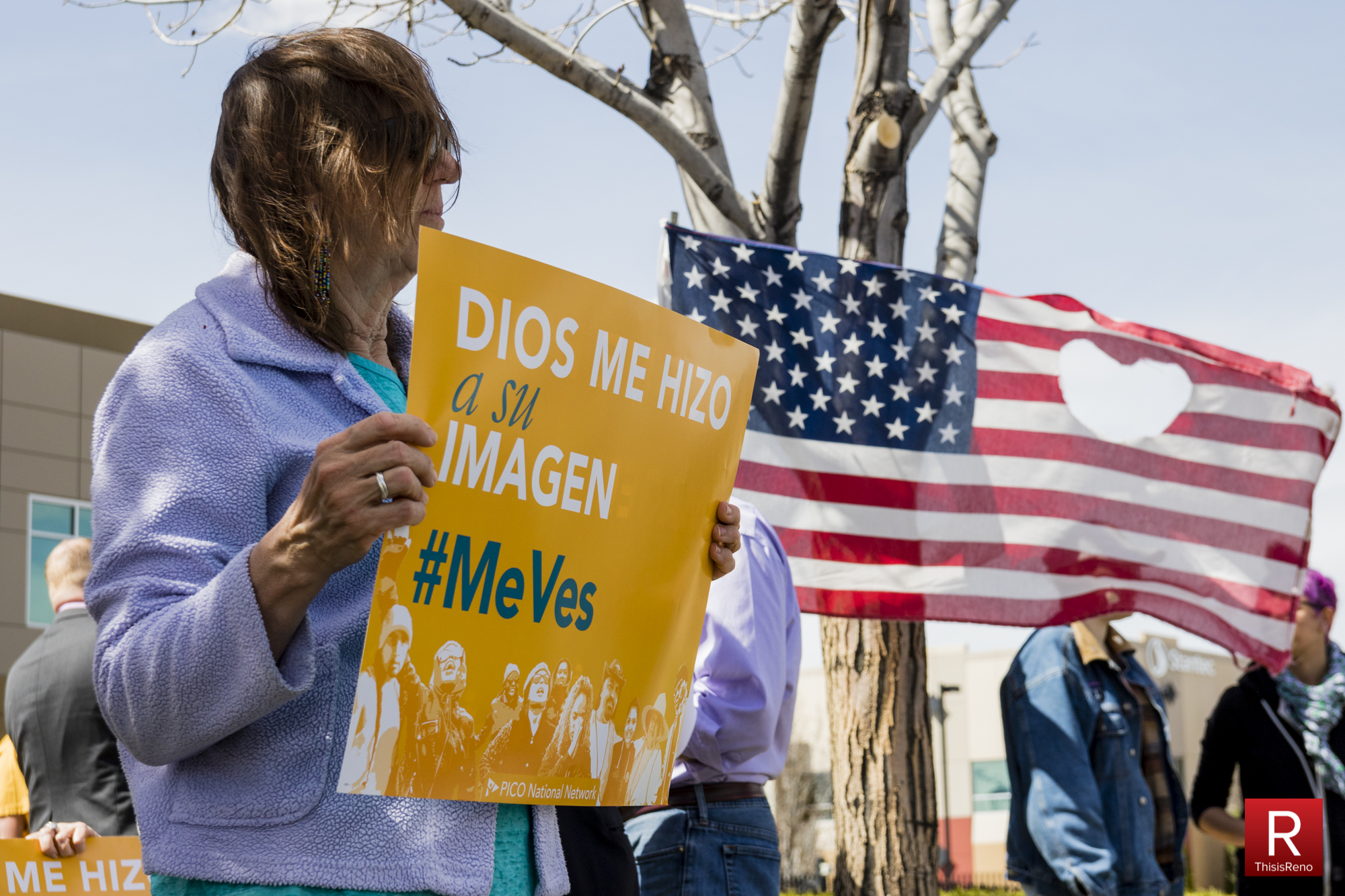 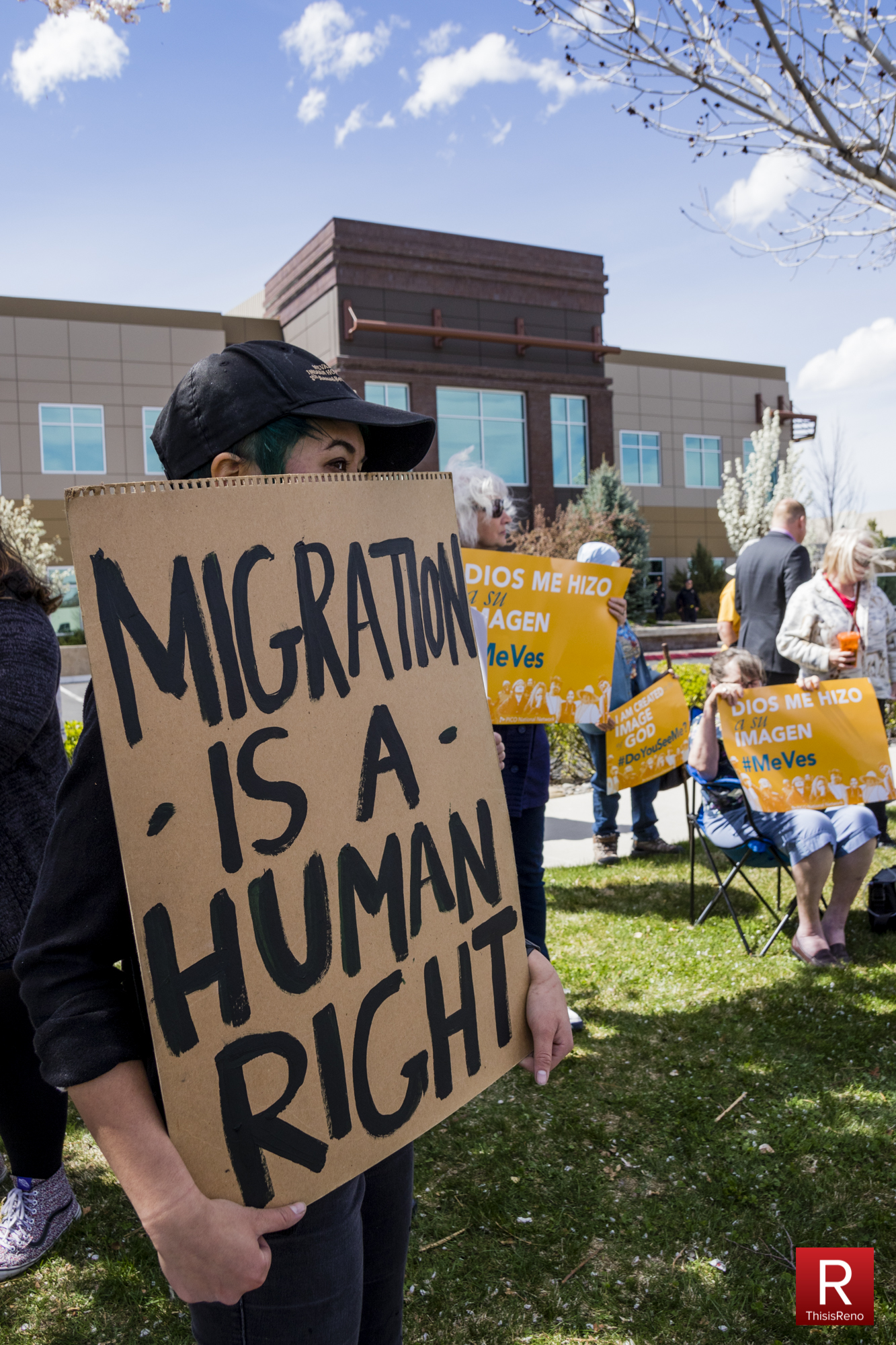 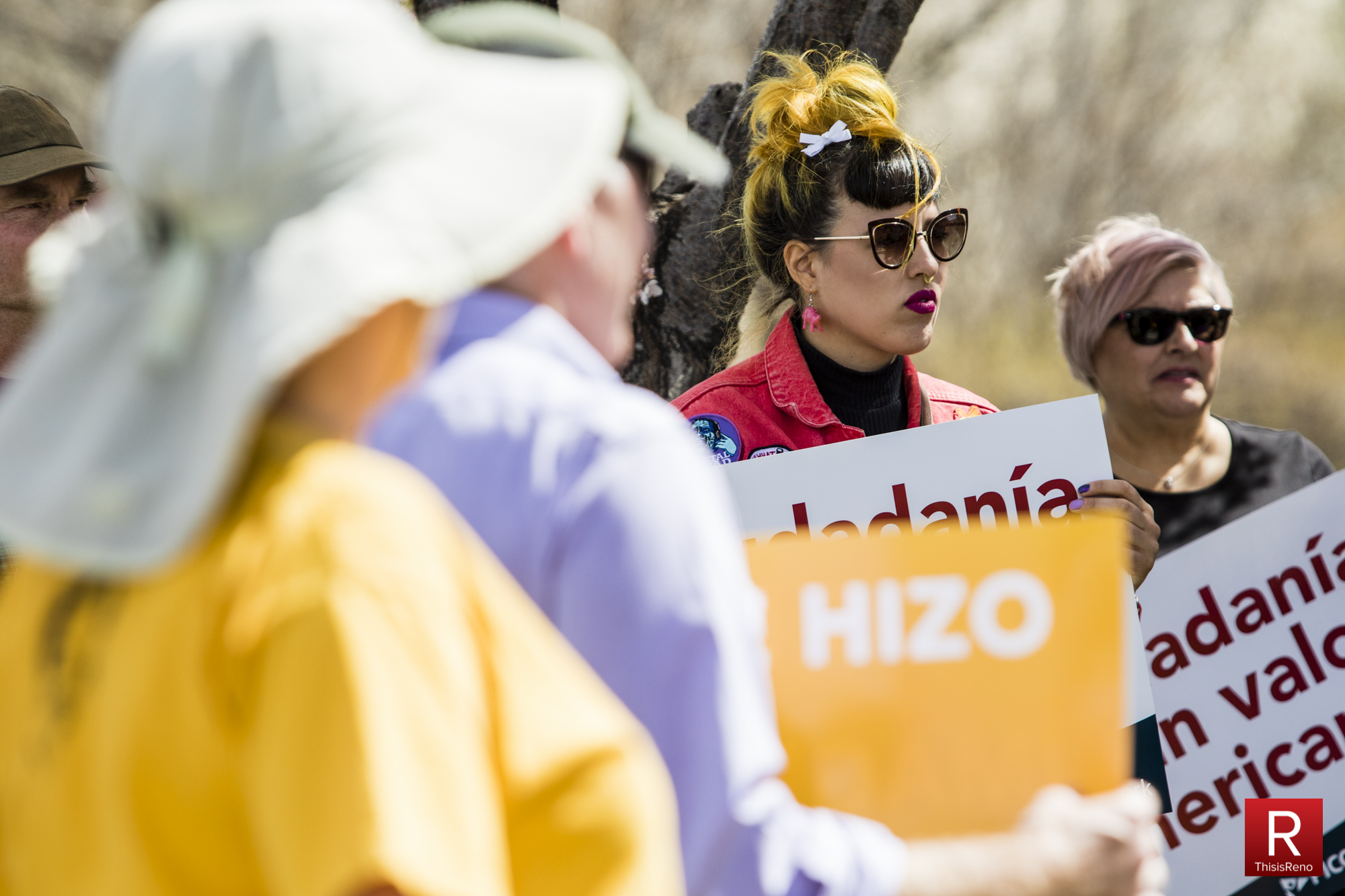 Wednesday afternoon a crowd gathered in front of a nondescript building. But looks aside, it was the location where David Chavez-Macias had an appointment with ICE officials – a meeting his legal counsel advised him not to attend. Chavez-Macias may have faced immediate detention and deportation. In his place, faith leaders including Rev. Neal Anderson and Rev. Jorge Herrera would attend for him.

This past weekend Chavez-Macias was granted sanctuary at the Unitarian Universalist Fellowship of Northern Nevada (UUFNN). While he is under sanctuary at the church he is protected from all but an issued warrant. It is ICE policy not to enter “sensitive places.”

Members of local grassroots organization ACTIONN, parishioners of UUFNN, and concerned members of the community amassed on a small strip of grass and sidewalk to show their support and to send a message to ICE that they want Chavez-Macias to remain within the Reno community. The demonstration also conveyed a broader message about what participants identified as an “immoral and broken immigration system.” 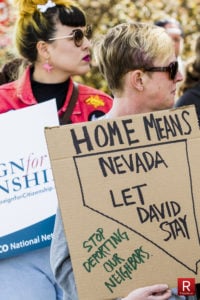 Officers from Reno Police Department were present but remained at a distance. The few conversations held between rally leaders and officers were in a decidedly relaxed tone.

Rev. Anderson talked among the crowd openly about his apprehensions as to what would happen, though this is not the first time he has taken on the role of representative for an immigrant. In January 2016 a similar circumstance arose which ended favorably for the immigrant. He doubted that they would meet with an ICE officer but reiterated that it was their goal to do so.

After an opening prayer, ACTIONN’s Aria Overli explained to the crowd how a simple driving infraction for Chavez-Macias in 2014 lead to three months of detention and required monthly visits to an ICE agent to avoid deportation.

Overli also tackled what she referred to as misconceptions about immigration. Regarding the idea that “only bad people get deported,” she stressed this was not the case. Chavez-Macias is evidence of that, having no criminal record and working legally. Second, she explained that being that undocumented or illegal is not a choice. Overli described the efforts Chavez-Macias has made to become a legal citizen and the financial hit he has taken in doing so; he is now left with zero recourse to become a legal immigrant.

Jakki Duron spoke next, saying that the immigration system is fundamentally broken with 12 million undocumented workers serving as a testament to this failure of government. She also asked for more attention towards the US’s destabilization of foreign governments, specifically south American governments. She ended with a rousing “No Walls! No deportations!” 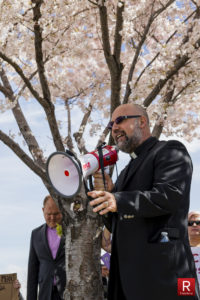 Chavez-Macias’s pastor, Rev. Jorge Herrera of St. Therese Church of the Little Flower, asked the demonstrators to tell their elected officials that enough was enough, that it was time to fix the immigration system.

With that Rev. Anderson, Rev. Herrera, and two other faith leaders compiled signed petitions, letters from those who know Chavez-Macias, and paper work stating Chavez-Macias’s goals to remain with his family in Reno, and entered the building. The crowd raised their picket signs and chanted as the group entered the building. The crowd waited as patiently as they could, though a few paced ever closer to the front door awaiting news.

After what seemed like much longer that it actually was, Rev. Anderson and the others exited the building with somewhat somber faces. The crowd was not particularly surprised by this.

The proxy group was not permitted past security nor was the paperwork they had amassed accepted. They were instead given a number to call, which Rev. Anderson did. He left a message prepared by himself and Mike Thornton, of ACTIONN, that explained Chavez-Macias’ decision to seek sanctuary and that legal counsel has advised him not to attend his monthly meeting. It also stated that Chavez-Macias wishes to return to his family but can only do so after he receives assurance that he will not be deported.

Overli noted that they would keep everyone updated via Facebook as to what happens in Chavez-Macias’ case.