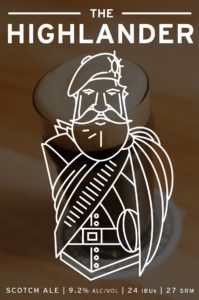 The Depot, Nevada’s first combined brewery and distillery, recently took home three medals in the 2017 Best of Craft Beer Awards (BOCBA), including the competition’s top recognition. The Depot was awarded a gold medal, the BOCBA’s highest honor, for The Highlander Scotch Ale.

The brewery’s Return of the Viking Barleywine and The Milk Man Stout both received silver medals in their respective categories, beating out hundreds of brews from all over the country. As medal recipients, each beer will be featured on Best of Craft Beer Award’s social media for a year, receive a full page advertisement in Draft Magazine’s Craft Brewers Conference Issue and be granted one automatic entry for the following year’s contest.

“Northern Nevada has quickly established itself as one of the country’s top brewing regions and to receive these honors from among so many other great beers around the country is humbling proof that this area is one of the nation’s top brewing destinations,” said Brandon Wright, owner, brewmaster and head distiller at The Depot. “Our passion, from the start, has been to create craft beer that people enjoy and that we can be proud of, and we hope these results prove that we are on the right track.”

The Highlander, which received a gold medal at BOCBA, is a Scotch ale with brown and ruby hues. It is marked by its notes of rich caramel, fresh bread and brown sugar. BOCBA also awarded silver medals to The Viking, a blonde barleywine, and The Milk Man, a cocoa milk stout.

Hand crafting beer, whiskey, and spirits on-site in the company’s historic downtown building, The Depot uses brewing traditions which are almost extinct in modern brewing facilities, including open fermentation and cereal cooking of grains. Those grains are sourced from local farms across the area whenever possible, guaranteeing the highest caliber of product in every batch of beer. This painstaking attention to detail has allowed The Depot to create superb beers and spirits, with award winners in each category.

REVIEW: Sneak Peek at The Depot’s New Menu and Event...