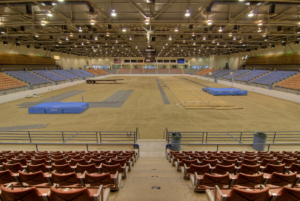 The Reno-Sparks Convention and Visitors Authority (RSCVA) board on Thursday agreed to move forward with a proposal that would have the state assume control of and expand the Reno-Sparks Livestock Events Center.

If approved by legislators, the lease between the state and Washoe County would be eliminated and the Nevada Department of Agriculture would take over the property, 1350 N. Wells Ave., in July 2018. Plans would then be for trustees representing various livestock organizations to manage the site.

RSCVA board members in January said they were concerned about the state taking the property without any increased revenue and potentially having no funds to maintain it.

However, a proposal being floated is for the RSCVA to contribute $500,000 per year the next two years to ensure smooth transition of ownership and for things such as maintenance and operations. A vote on those dollars would be scheduled at a later RSCVA meeting, if necessary.

State agriculture director Jim Barbee said he sees this opportunity as a partnership. Plans are for the state to collaborate with the University of Nevada, Reno to build and grow the livestock center for educational purposes.

“I have a ton of heartfelt connection to the property and want to see it be successful,” Barbee said. “Our goal is to improve and expand the facilities.”

Funds from private and non-profit groups, the rodeo, and help from the Nevada Junior Livestock Board are among ways to make that possible, Barbee said.

RSCVA chief executive officer Phil DeLone encouraged the board to support the bill, especially since the livestock center has a smaller footprint than other facilities.