Snowpack Continues to Shatter Records This Winter in Nevada 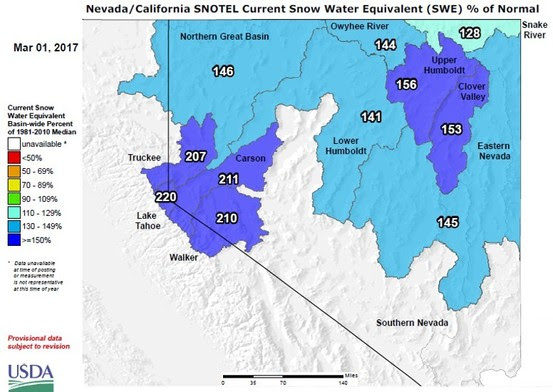 It’s no secret it’s been a blustery winter, complete with plenty of precipitation. In fact, the Natural Resources Conservation Service (NRCS) Nevada Water Supply Outlook Report shows 2017’s snowpack is keeping pace with, or surpassing, the snowpack levels of the infamous 1983 snowpack in the Sierra and Humboldt basins.

Looking beyond the 1981-2017 SNOTEL era, the Upper Carson Pass snow course, with data back to 1930, had its second highest March 1 snow water content, behind 1969. Lake Lucille snow course, located in Desolation Wilderness near Lake Tahoe, had a March 1 record amount of snow. Snow surveyors measured the snow to be 18 feet deep and contain 99 inches of water content. This surpasses all past March 1 measurements and ranks third all time when compared to April 1 data which goes back to 1913. 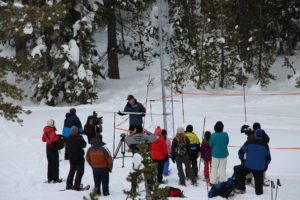 Snow courses are measured once a month using snow tubes to take a core of the snowpack. Snow courses do not provide the hourly data that SNOTEL stations due, but these monthly data play a valuable role in putting each year in historic perspective. This year has become one of the biggest snow years ever measured in the Sierra.

It is not just the Sierra, though. Other Nevada cities have been feeling the chill as well. The snow on Mt. Charleston, near Las Vegas, is 182 percent of normal. Snowpacks are 146-156 percent of normal in the Humboldt Basin and 134 percent in eastern Nevada. The Humboldt River experienced flooding in February. Springtime streamflow forecasts for the Humboldt River exceed the amount of space left in Rye Patch Reservoir making it likely that Rye Patch will fill this year.

March through July streamflow forecasts are 192-342 percent of average in the Truckee, Carson, and Walker basins and 171-314 percent in the Humboldt basin. Streamflow volumes are expected to exceed those from 2011, the last big snow year. If the storm track continues to bring moisture to the Sierra, streamflow volumes could beat 1983 levels on the Truckee, Carson, and Walker rivers.

For details, contact your local NRCS office or visit www.nv.nrcs.usda.gov.