The Washoe County School District is dealing with a multi-million dollar deficit as it prepares for next fiscal year, and among top reasons include property taxes not being in sync with economic growth. 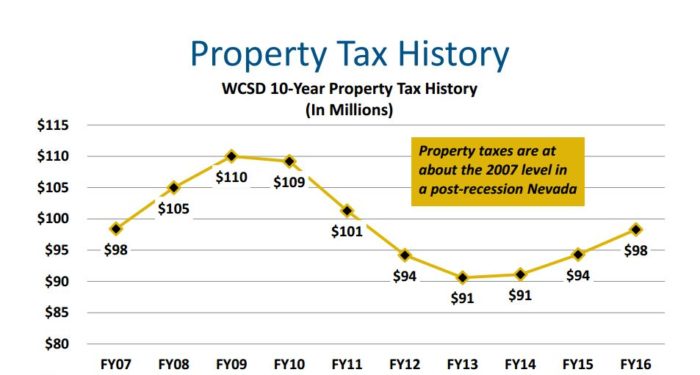 “With property taxes around the 2007 level, they remain unstable and unpredictable for the district’s budget,” a report presented recently to the board of trustees said. “Overall operating costs have increased approximately $68 million (from 2007 to 2016), or an 18 percent increase without growing property taxes to offset them.”

Property taxes are the district’s second largest local revenue source, bringing in slightly less than $100 million this fiscal year, down from $110 million in 2009 and $109 million in 2010, the report said. The Consumer Price Index has been increasing at more than 1 percent annually the past decade, resulting in $10 million in losses.

The $30 million shortfall isn’t related to the November passage of Washoe County question 1, which increased sales tax by 0.54 percent to pay for new schools and repair existing schools. Funds generated through WC-1 only can go toward construction of and refurbishing of facilities. This money cannot be used for teacher or administrator salaries or other school operations.

The largest source of revenue for operations comes from the state, which pays the district about $5,800 per student annually. The district’s general fund budget this year was $472 million and is broken down as follows:

District spokeswoman Victoria Campbell said this could result in more teachers being moved to other schools, depending on who retires or resigns. There are about 4,200 certified employees in the district and between 350 and 400 are typically hired over the course of a year.

“Attrition will be a significant factor and this means more reassignments and transfers,” Campbell said.

Superintendent Traci Davis said there’s been no discussion about laying off teachers.

“We are working hard to pursue many options to ensure that we do not have to lay off teachers, including freezing all vacant positions with a focus on central office positions first,” Davis said in a statement. “Additionally, we have been working with our associations, including the teacher’s union, every step of the way.” 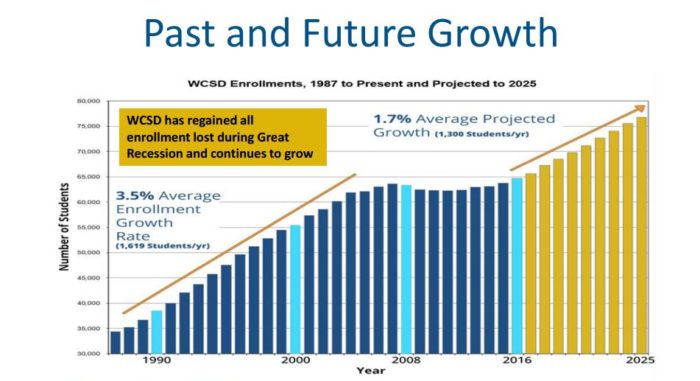 During the last 9 years, the district balanced its budget by cutting in various areas and by relying on $134 million in savings to get by. It enacted $21 million in furloughs, step freezes, reductions in contracts; $21 million in health insurance premium holidays—a pay period when claims aren’t deducted from checks; and $16 million in textbook waivers during seven of those years. With approval of the Nevada Legislature, it also increased classes over a 4-year period in first through third grades, saving about $26 million.

Nevada Revised Statutes dictate a 16-to-1 ratio in kindergarten through second grade and 18-to-1 ratio for third grade.

To contain rising costs, it’s implemented 4-year teacher contracts with no cost-of-living raises while addressing starting teacher salaries and retention efforts to compete with other school districts. Additionally, healthcare prices are expected to rise 10 percent so the district partners with employees to address hospital contract expenses and wellness programs that help reduce costs. Costs are also increases for utilities, equipment, goods and services.

A final budget for the 2018 fiscal year is due to the state Department of Taxation by June 8 and the deadline for filing an amended final budget is July 5.