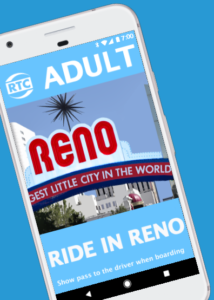 The Regional Transportation Commission (RTC) of Washoe County recently unveiled a Spanish version of their free fare app, Token Transit. Any person whose phone’s language preference is set to Spanish will experience the app in Spanish as well.

Token Transit is a free app in the Apple Store and Google Play Store which enables any person to link their credit/debit card to purchase fares using their smartphone.

“This app offers the convenience of not having to visit a pass vending machine nor waiting for a pass to be bought online and mailed,” RTC Executive Director Lee Gibson said. “The convenience of this technology makes it popular for our riders to use.”

Since the app’s launch in December there have been 1,700 downloads. RTC is hoping to garner more downloads by expanding its consumer base. To download the free Token Transit app, visit http://tokentransit.com.