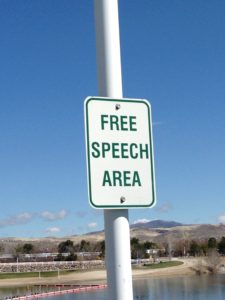 A policy governing free speech at facilities run by the Reno-Sparks Convention and Visitors Authority (RSCVA) was approved Thursday, along with designated zones for people to exercise their constitutional rights.

No written policy had been in place, RSCVA attorney Ben Kennedy said. Although facilities are publicly-owned, he said they’re leased out to private entities for special events, which sometimes are obstructed by demonstrators.

“We want to make sure events they conduct at our facilities can take place without interruption,” Kennedy said. “This policy is content neutral.”

The board approved free speech zones outside the Reno-Sparks Convention Center, 4590 S. Virginia St., and the Reno-Sparks Livestock Events Center, 1350 N. Wells Ave. Convention center protestors can demonstrate on the public sidewalks on Kietzke Lane, South Virginia Street and East Peckham Lane. Picketing at the livestock center can be done on the sidewalks lining Sutro Street and North Wells Avenue.

RSCVA Chairman Bob Lucey, a Washoe County commissioner, noted that hunting and outdoor-recreation shows draw protestors, as does the circus.

“A number of events that include animals may be thought of as contentious,” Lucey said.

RSCVA board member Ed Lawson, a Sparks city councilman, said he’s been confronted during Free Fishing Day at Sparks Marina Park. The annual event is put on in June by the Nevada Department of Wildlife.

Lawson said one year he was put on the phone with an attorney during the event who asked if the park had a free speech area, which it does.

With the establishment of such areas, Lawson said all parties and their personnel need to be informed.

“Staff needs to be aware of where free speech zones are,” Lawson said.