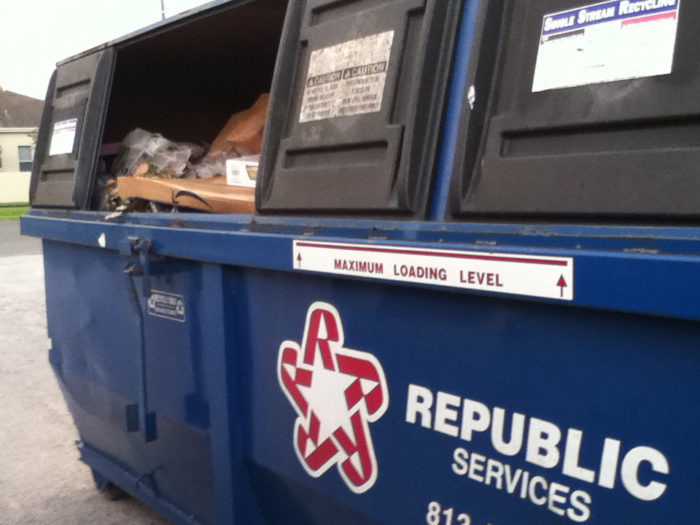 A bill introduced into the legislature last week aims to protect smaller waste recycling companies against exclusive waste contracts, such as the kind that Reno and Las Vegas have with waste companies to manage area garbage and recycling.

The state Division of Environmental Protection oversees statewide recycling efforts, but in southern Nevada the company Republic Services is facing similar criticisms as Waste Management in the north for problems associated with the exclusivity of franchise agreements with local governments.

“The state hasn’t really addressed its waste management and recycling policy in more than 25 years,” said Mike Draper of Argentum Partners, which helped introduce bill to the legislature. “Because of that, we have significant and similar issues on both sides of the state regarding landfill diversion, recycling and monopolistic waste and recycling competition that are being used to limit competition, stifle progress and, ultimately, severely damage locally owned businesses.

“While this bill doesn’t solve all of these issues, it does begin a badly needed discussion, while beginning to provide some relief to these smaller businesses.”

Franchise agreements can be controversial — and not just in Nevada.

For example, Republic Services reportedly overcharged commercial customers in San Angelo, Texas, according to reporting by the San Angelo Live. The city has steadfastly defended the company even though critics are arguing that the city is merely taking the company’s word about issuing refunds to some but not all of the overcharged customers.

In Reno, Waste Management’s franchise agreement with the city has been fraught with criticism, legal battles, and public debate, and led to recent ethics complaints filed against Reno’s Sustainability Manager, Lynne Barker.

Nevada Recycling and Salvage (NRS) representatives said that Barker ordered a raid against its facility in early February. Barker did not respond to a request for comment, but county staff emails indicate she initiated the inspection, despite city and county officials trying to portray it as a joint operation.

The county heath district’s Environmental Health Specialist Supervisor, Jim English, wrote in an email Feb. 20, after the inspection, that the county has in the past requested the city to inspect NRS.

But in an email to City of Reno spokesman Matt Brown on Feb. 27, English wrote that “the actual coordination of the inspection was done by the City of Reno but I don’t believe it is necessary to address this item.”

No History of Complaints

Neither the city nor the county have produced any documented complaints against the facility.

“Reno Direct (has) no complaints on file (against NRS) since 2011, and those were for parking violations,” said Alex Woodley, the city’s customer and code enforcement services manager.

Public records obtained by ThisisReno show that Barker asked city code-enforcement staff on Jan. 24, 2017, for a history of complaints against area waste facilities. Only Waste Management showed code violations, one for graffiti in 2013 and another for landscaping in 2015. Both were noted as resolved.

County officials are refusing to respond to questions about the inspection.

“When it comes to landfills and waste disposal programs, Nevada is a unique state in that the major franchisee in both southern Nevada (Republic Services) and northern Nevada (Waste Management) also own the major landfill in those regions,” he said. “Because the two companies are the main franchisees in their region and they own the landfill, this allows for the potential of artificial market manipulation to the detriment of smaller waste haulers and recyclers, potentially creating significantly unfair competitive advantages and endangering the future of those smaller businesses.”

Outside reviews of Reno’s franchise agreement found both legal and fiscal compliance. Waste Management wants the exclusivity of its agreement with the city enforced, but city councilmembers said recently that they want parties to come together to improve the agreement.

“I think Waste Management does a great job… but that’s a big interest to me that our small businesses are not being impacted,” said Councilman Oscar Delgado.

The bill going through the legislature is sponsored by southern Nevada legislators.