Architectural Creations on Display at Meadowood Mall During ‘CANstruction’ 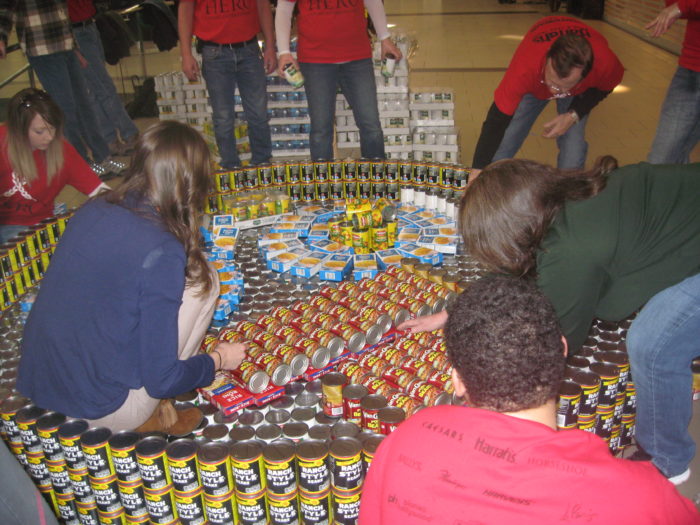 Some unique structures took their place Wednesday at Meadowood Mall, but look closely at the components of each and they’ll resemble something one’s more likely to see at a grocery store than a shopping center.

Ten teams have assembled to build structures that include a box truck, house, fox, boat, lighthouse, and event a skillet with bacon and eggs—all out of canned food.

The Food Bank of Northern Nevada will reap benefits of the 14th annual CANstruction Reno. Last year’s event netted more than 24,000 cans and boxes of food and this year’s event is expected to be as plentiful, said Lauren Greeney, Food Bank event and food drive coordinator. 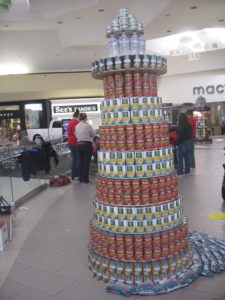 “We love it because all this food we get isn’t expired and we’ll be able to distribute it without having to go though it and throwing some of it away,” Greeney said.

Orders were placed at WinCo Foods by participating teams, which paid the costs. The Food Bank then picked up the merchandise and delivered it to the teams.

Thrive Market took part in the event for a first year and built a lighthouse about eight feet tall.

“The idea is to shine a light on hunger and stamp it out,” said Ryan Peterson, Thrive Market operations manager.

A team from Harrah’s Reno built a skillet with bacon and eggs.

“We’re not building a castle or London Bridge, so it’s kind of different,” said Lanaii Elkins, Harrah’s food and beverage manager. “We like that team members come from different departments and give back to the community.”

Participating teams must follow a host of rules that include structures not exceeding 10 feet in height or width and a maximum of five people working on a project at once. Other rules prohibit props, use of permanent affixers and removing of labels. Additionally, leveling material can’t be more than a half-inch thick and may not be load bearing. 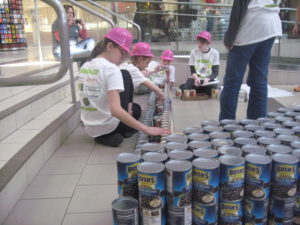 Teams may also choose to work with someone from the local chapter of the American Institute of Architects, which helps put on the event.

Structures will be judged by a panel of jurors in the following categories: original design, structural ingenuity, best meal, use of labels and most cans.  Winners are scheduled to be announced at the mall at 6 p.m. March 2 and first-place projects will be submitted for competition at the national level.

Displays are scheduled to be up through March 5 at the mall, 5000 Meadowood Mall Circle, between men’s Macys and Starbucks Coffee Company. Those choosing to vote for their favorite in the people’s choice award can pay a $1 fee, which will benefit the Food Bank.

Greater Nevada donates over $17K to Food Bank of Northern...