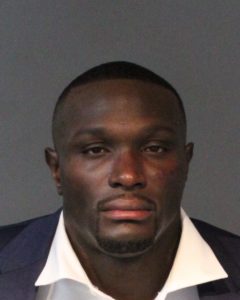 A chief protagonist in the “Zola Story,” that took the internet by storm in 2015, has been sentenced to 16 years in prison.

Akporode Uwedjojevwe, 36 of Michigan, pleaded guilty in November 2016 to one count of sex trafficking and one count of coercion, according to the Washoe County District Attorney’s office.

He will be eligible for parole after about five years.

“Zola,” or Aziah King, wrote of a “Z” character in the Twitter narrative that ended up capturing the attention of numerous media outlets around the world, including Rolling Stone and The Washington Post.

Reddit commenters discovered through her narrative that Uwedjojevwe was “Z,” through a crime report posted on ThisisReno in April 2015, which solidified Uwedjojevwe’s tie to Reno in the Twitter story.

King later deleted the series of tweets, but they are archived and can be read below.

Actor James Franco is reportedly making a movie of the story.

At sentencing Deputy District Attorney Darcy Cameron presented the testimony of all three female victims who described how Uwedjojevwe’s actions had impacted their lives. One victim disclosed that “it was the worst day of my life” and had caused a suicide attempt.