By Bob Conrad Published: February 22, 2017Last Updated on February 23, 2017
Heidi Gansert is pictured with Governor Brian Sandoval. She was Sandoval's chief of staff after serving in the legislature as an assemblywoman and Republican minority leader. 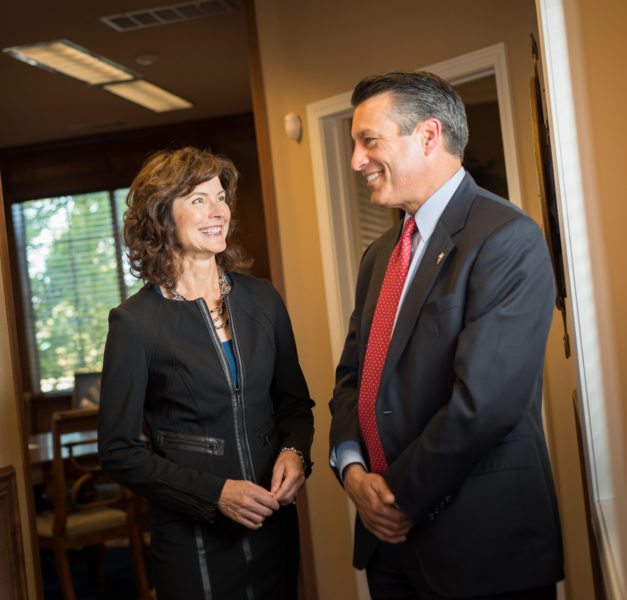 Heidi Gansert is pictured with Governor Brian Sandoval. She was Sandoval’s chief of staff for two years after serving in the legislature as assemblywoman and Republican minority leader. Photo: Chris Holloman.

The University of Nevada, Reno (UNR) and its Executive Director of External Relations, Heidi Gansert, were sued this week because Gansert is also serving as a state senator at the Nevada Legislature.

“Gansert’s continued employment in the state’s executive branch, as executive director of external relations for (UNR), puts her in direct violation of Nevada’s Separation of Powers clause, now that she is also serving in the state senate,” explained NPRI’s Center for Justice and Constitutional Litigation Director Joseph Becker. “Having a legislator make decisions that might directly benefit the position they hold in another branch of government creates a clear conflict of interest.”

“Heidi Gansert is on leave without pay and is not working for the University of Nevada, Reno during the 2017 Legislative Session,” she said.

NPRI previously sued state Senator Mo Denis, who was a legislator and also held a job with the state Public Utilities Commission. Denis resigned from his job before the suit proceeded.

A number of public employees have served in government positions.

UNR Art Professor Howard Rosenberg was challenged for serving as Nevada System of Higher Education regent while also being tenured faculty. An ethics complaint against him was ruled in his favor, and he served as a regent for 12 years. He later served on the Washoe County School District Board of Trustees.

Jason Geddes served as an assemblyman while also employed by UNR. He is now an NSHE regent and works for the Washoe County School District.

David Bobzien was a UNR employee while also serving as a state assemblyman, and Sheila Leslie worked for Washoe County courts while serving in the legislature for more than a decade.

Ron Knecht was an employee of the Nevada Public Utilities Commission while also serving as a legislator. According to the Review Journal:

Knecht said he secured a legal opinion before he ran for the state Legislature. As staff analyst for the PUC, Knecht said he did not make policy decisions and, therefore, was not exercising power in both the executive and legislative branches of government. He added he did not vote on matters affecting his state salary.

Rosenberg also had to abstain from voting on matters directly affecting his position at UNR.

But the state ethics commission said in 2007 that a sheriff’s secretary could not also serve as Lander County commissioner.

“There are many factors to consider when determining whether dual roles pose a conflict of interest,” wrote then Ethics Commissioner Caren Jenkins, according to a report in the Las Vegas Review-Journal.

NPRI is seeking to address a grey area of potential conflict of interest.

In reference to Gansert, NPRI’s Becker said: “This is the exact type of scenario the constitutional provision was designed to prevent in the first place, where a sitting executive branch employee uses their elected position in the legislative body to lobby for other branches of the government.”

Becker said that the issue of public employees serving in elected decision-making bodies “has been long ignored by members of both political parties.”

Gansert did not respond to a request for comment, saying through a spokesperson that they had not seen the legal complaint. (A link was sent to them.)

UPDATE: Gansert sent the following statement today in response to the suit.

Nevada Senator Heidi Gansert released the following statement in response to the lawsuit filed against her by the Nevada Policy Research Institute (NPRI):

“The NPRI lawsuit is meritless. I have been fully transparent in demonstrating that I have taken an unpaid leave of absence from the University to serve in the Legislature. Nevada has an unambiguous precedent of legislators taking time off from their jobs in higher education to serve the people of the state.”

“Many of our legislators come from diverse backgrounds and industries, and Heidi has been reelected by the people to serve our great state,” Hardy said. “She is knowledgeable about much more than higher education and provides immense value to her constituents. We are grateful to have her again in the Legislature and I fully endorse her continuing to serve in her office as senator.”

“We have a proud tradition of a citizen legislature in Nevada, which means that Nevadans of all backgrounds are encouraged to serve their state.” Harris said. “We should never discourage candidates interested in public service from engaging in our political process.”

CORRECTION: Douglas French was previously identified as former president of the Ludwig von Mises Institute of Canada. The correct location is Auburn, Alabama.