By Ty O'Neil Published: February 17, 2017Last Updated on June 12, 2017
Samantha Szesciorka next to a display of artifacts from her Nevada Discovery Ride. 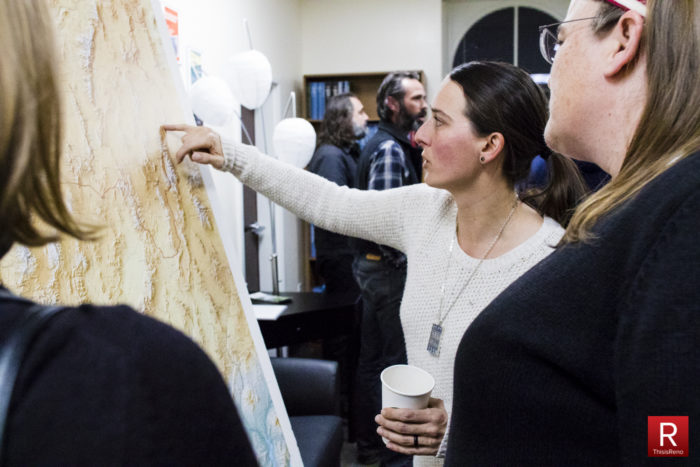 Samantha Szesciorka shows part of her route for the Nevada Discovery Ride.

Scroll below the story for a gallery of images from the opening reception.

The historic Lincoln Hall on the University of Nevada, Reno (UNR) campus was the backdrop for an opening reception unveiling “Saddletramp: The Nevada Discovery Ride” exhibit Feb. 15, organized by the Shared History Department. Anita Watson, coordinator of the Shared History Program at UNR, kicked off the evening’s events by introducing Samantha Szesciorka, the sole rider of the over 1,000-mile journey.

Szesciorka shared images and accounts of her trip with the intimate crowd. Despite the length of her trip, from the geographical center of Nevada and eventually ending in Reno, she was the only rider, and her husband was the entire support crew. She rode a mustang named Sage that had been gelded and gone through the mustang training program at the Carson City prison. Szesciorka said the she immediately connected with Sage the first time they met.

The audience listened as Szesciorka related the story of a sad encounter early in her trip. Just eight days in they came across a wounded young wild horse that became attached to Sage, refusing to leave his side. She explained how young males get kicked out of a herd by the stud when they reach breeding age. This is often violent, and the young horse showed physical evidence of a rather nasty fight. With hundreds of miles of trail ahead of them, and because of laws regarding wild horses, Szesciorka and Sage were forced to leave the young horse behind. She mentioned that she would like to return someday and see if the young horse they had dubbed Oscar was still in the area. 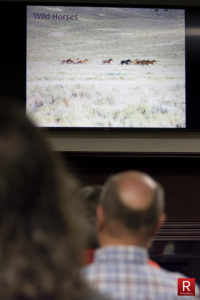 Some statistics from her journey:

The wildlife and the beauty of the Nevada Mountain ranges were a focus of Szesciorka’s talk. While most of the wildlife remained uninterested in the lone rider, wild horses were an exception. Territorial by nature, studs defending their territory charged Sage, Samantha, and pack dog Bella. This became commonplace, and thanks to a plastic bag on a riding crop the studs could be scared off rather quickly. That is, except for the story she told of a red roan stallion that charged and roared (yes, roared) at Sage. Samantha ran to defend Sage, plastic bag and all, while her husband caught images of the encounter and documented the sheer size of the stallion.

After Szesciorka’s presentation the audience moved to down the hall to a tall, well-lit glass cabinet filled with artifacts from the trip and a refreshments table. The crowd gathered around taking the opportunity to ask about the item. Two of the most discussed items were a worn-through pair of Easy Boots, similar to hiking boots but for equines, and Szesciorka’s modified crop/plastic bag wild horse deterrent. The exhibition will be on display until early May. 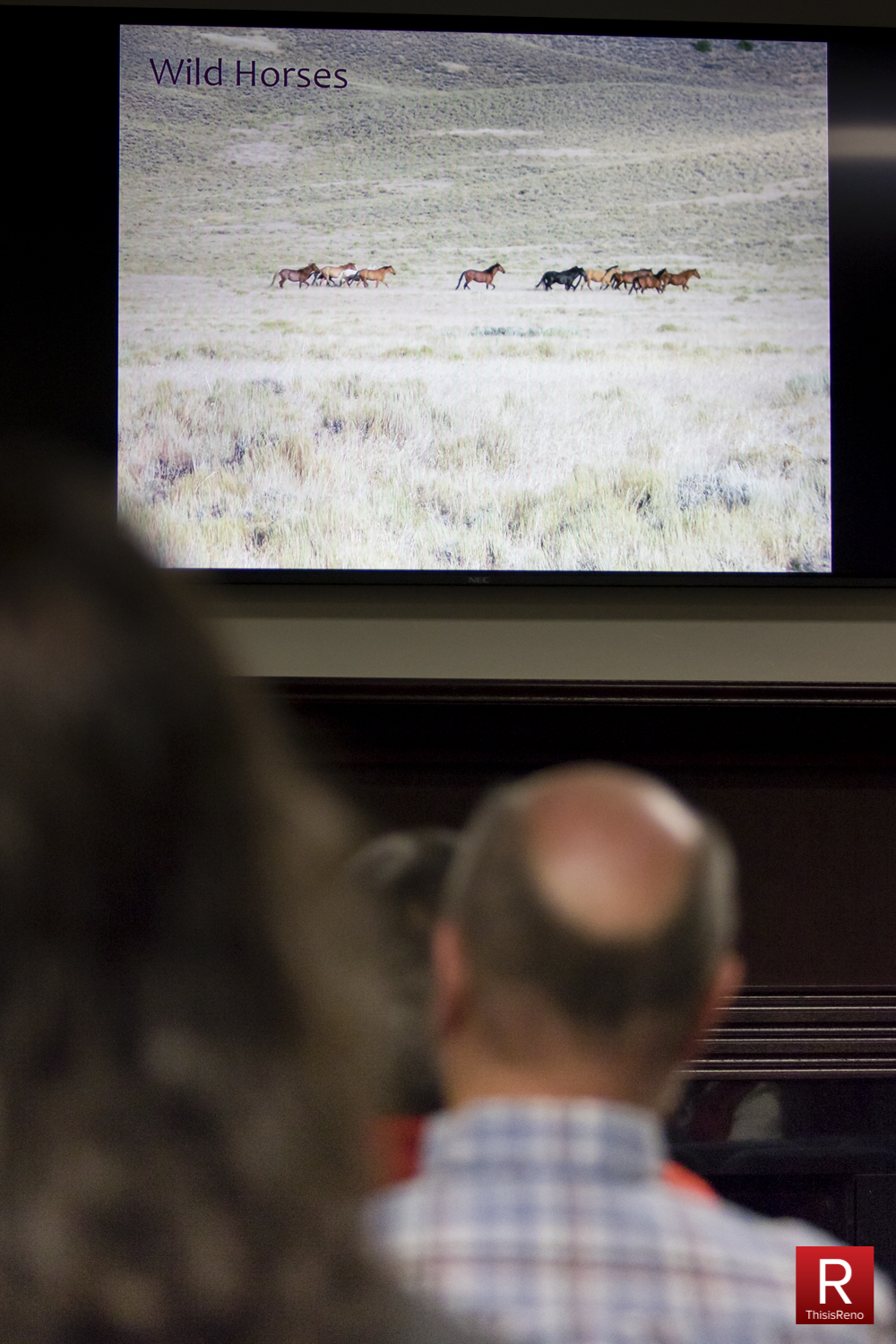 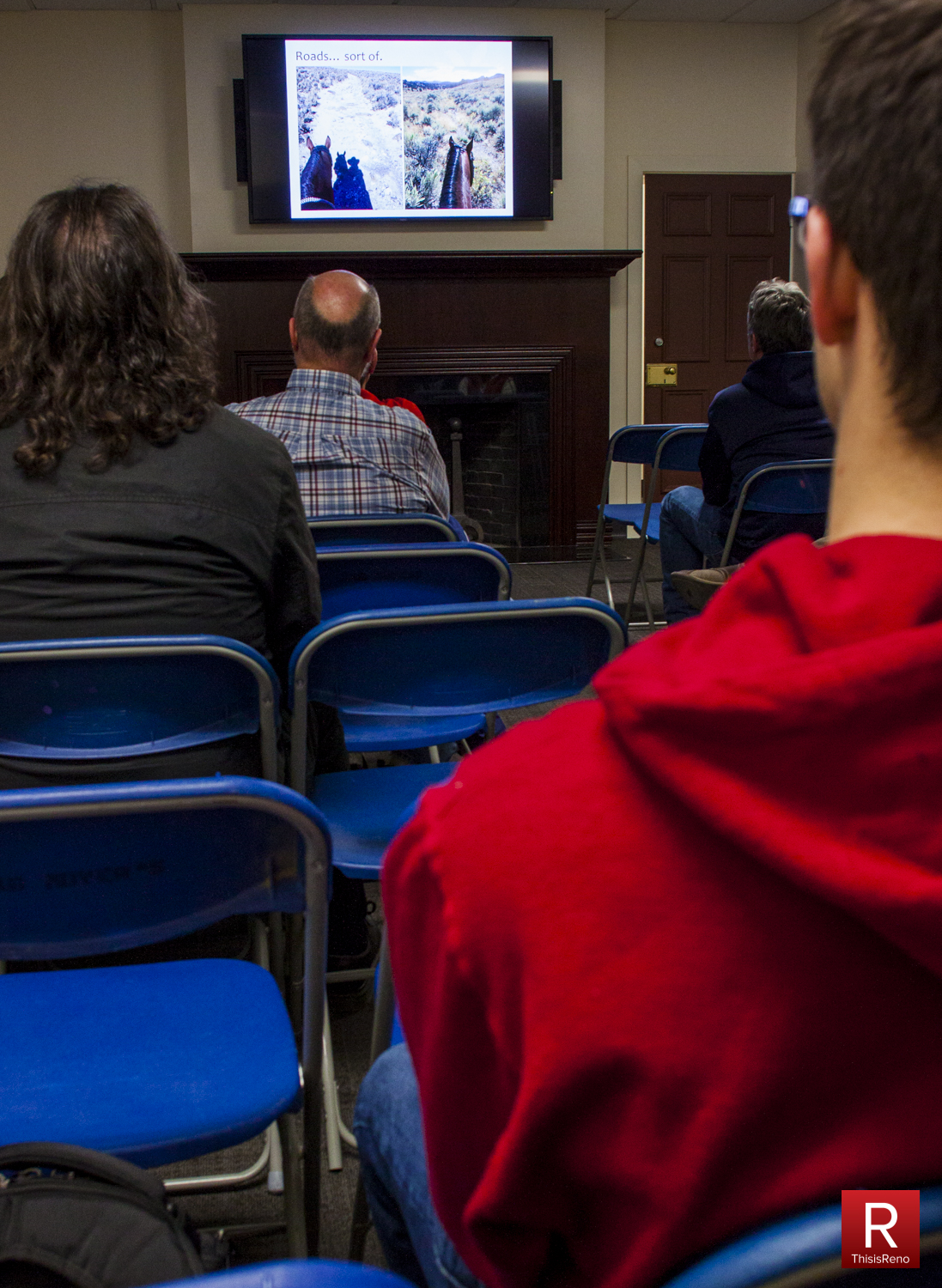 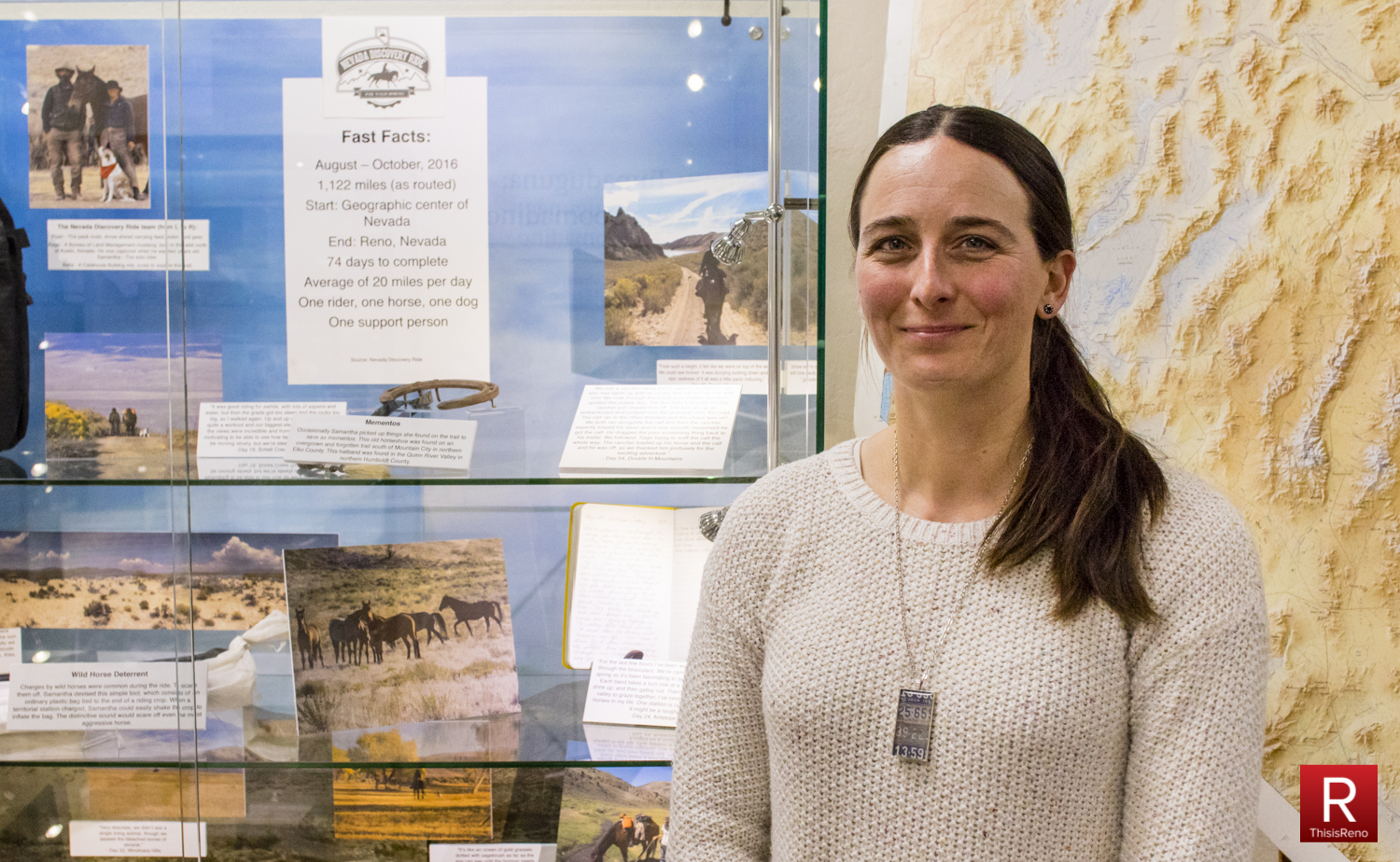 Samantha Szesciorka next to a display of artifacts from her Nevada Discovery Ride. 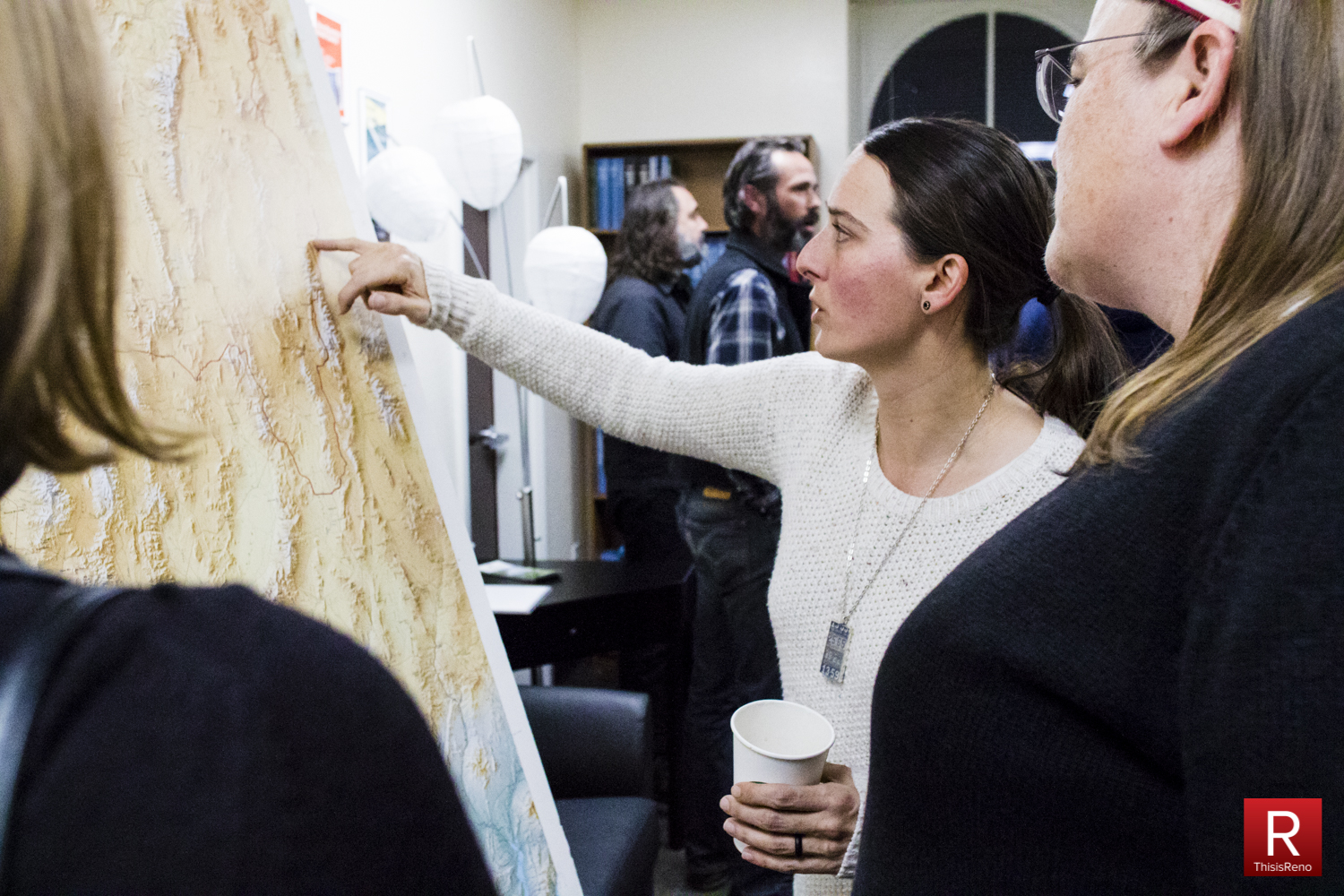 Samantha Szesciorka shows part of her route for the Nevada Discovery Ride. 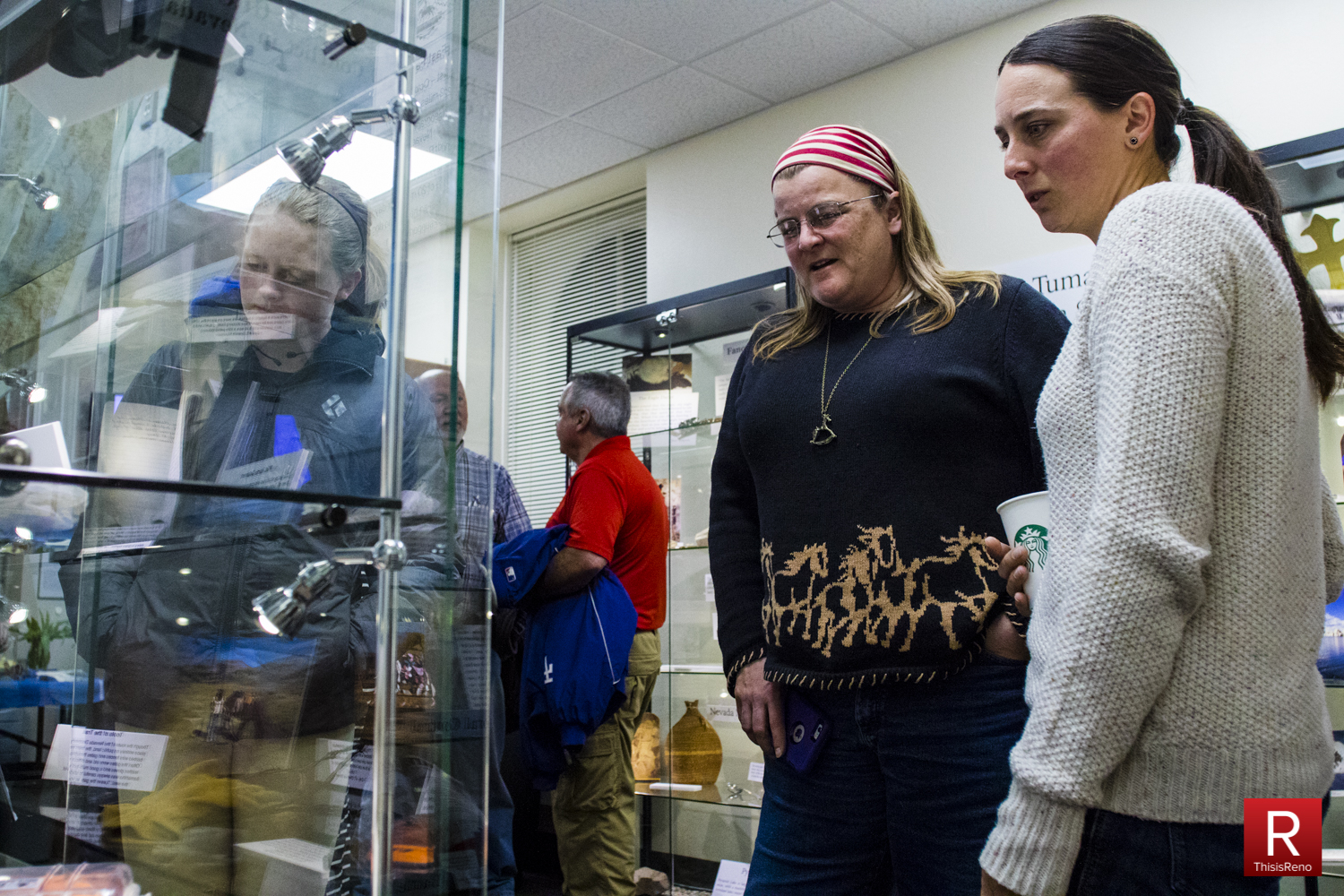 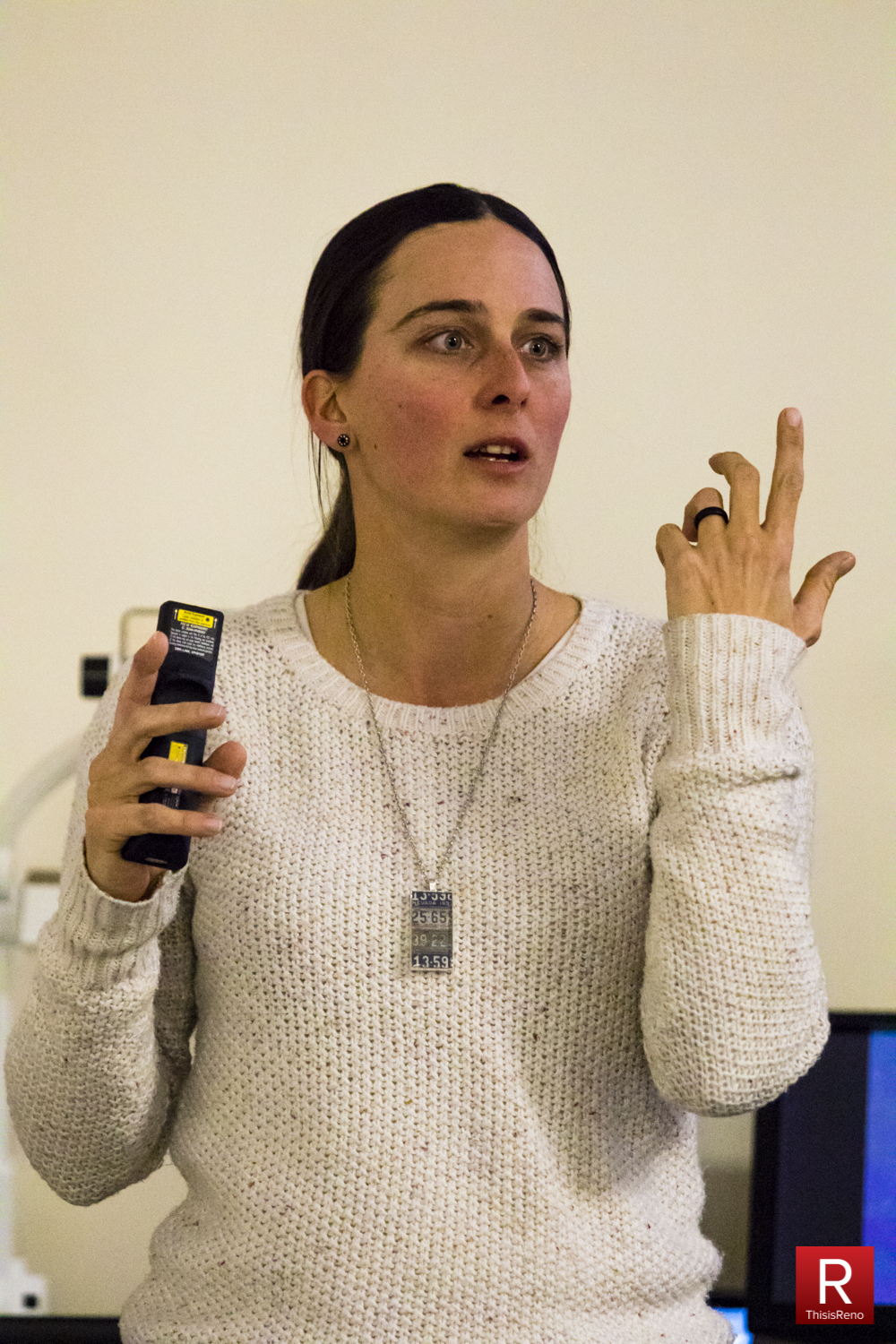 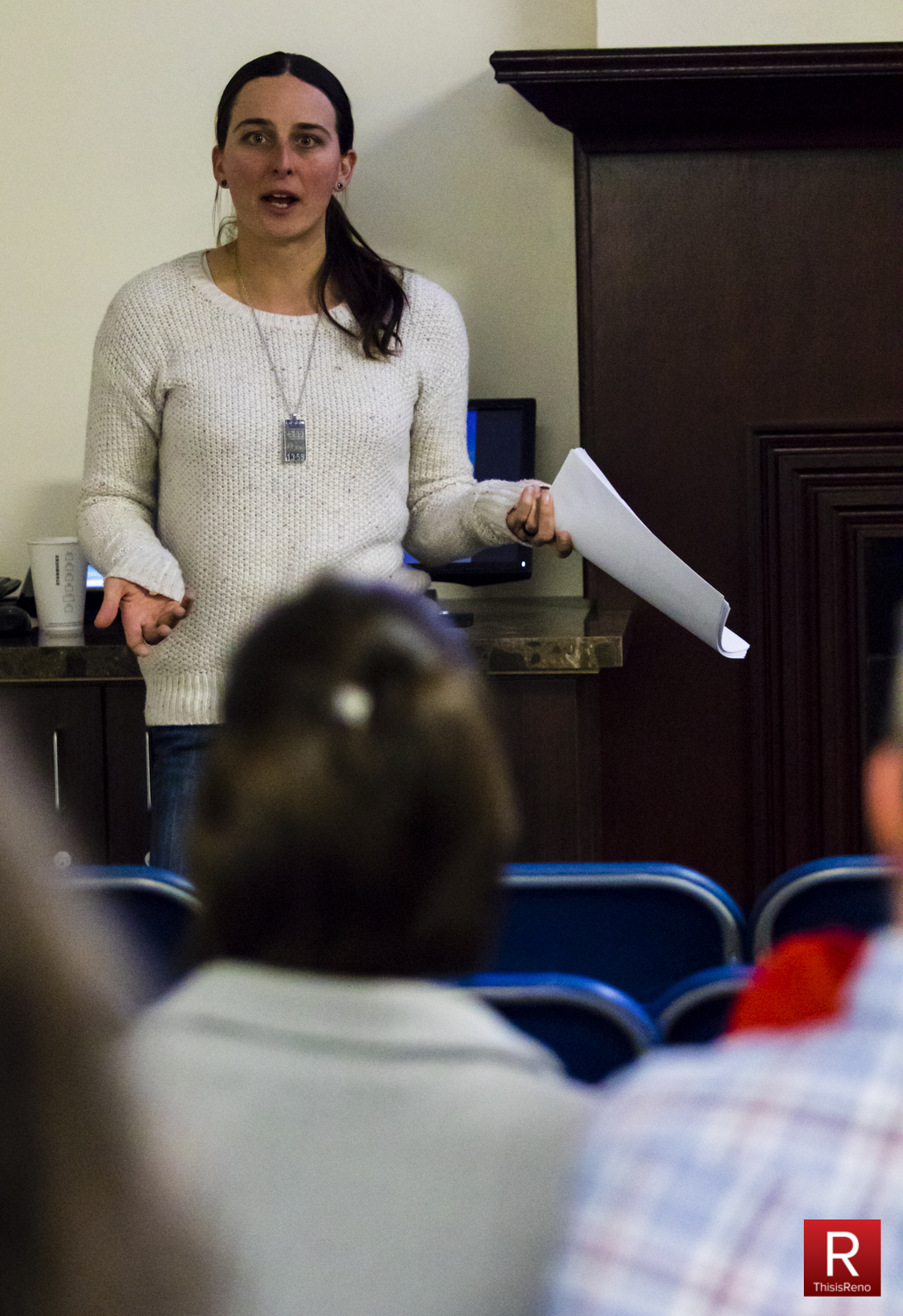 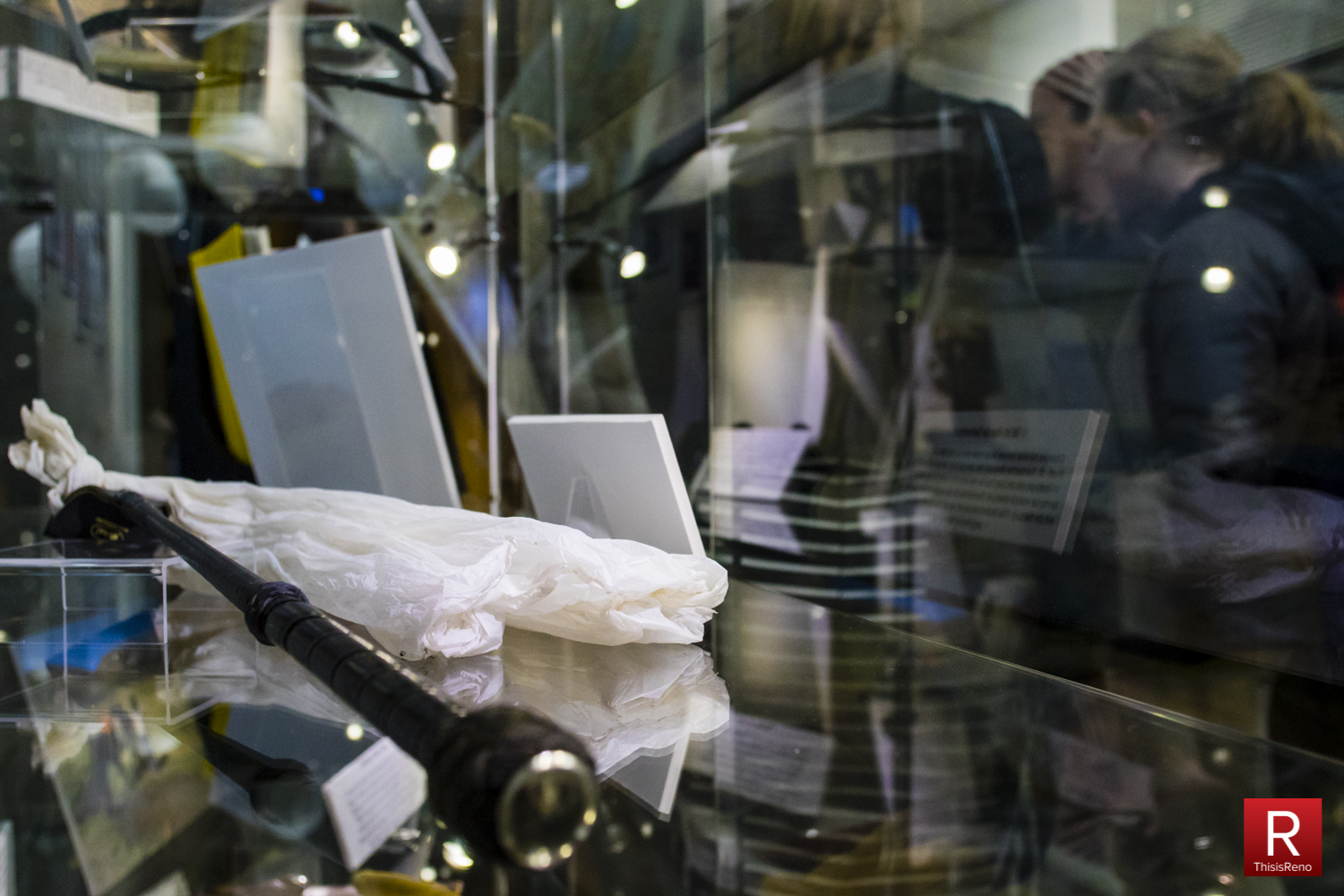 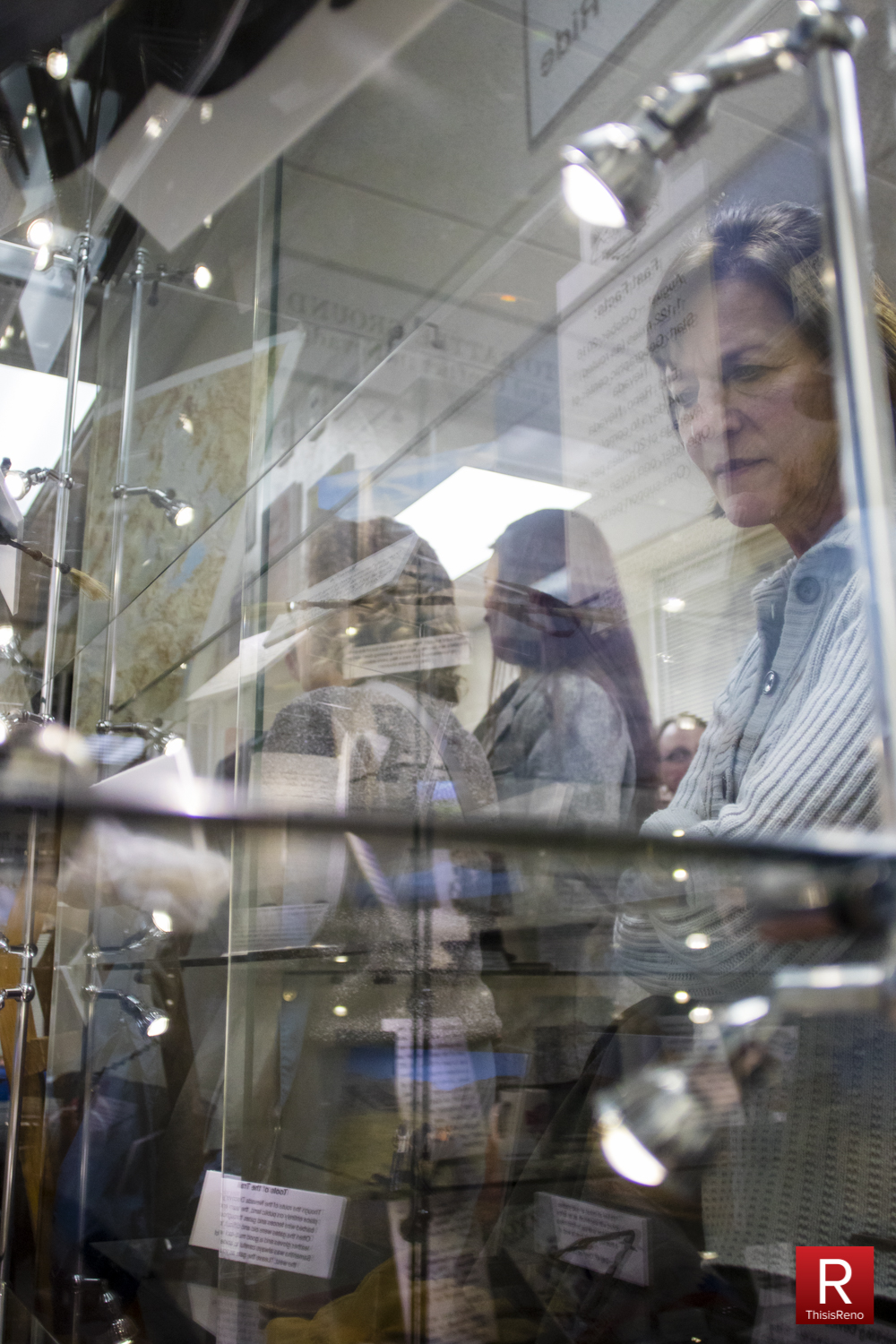 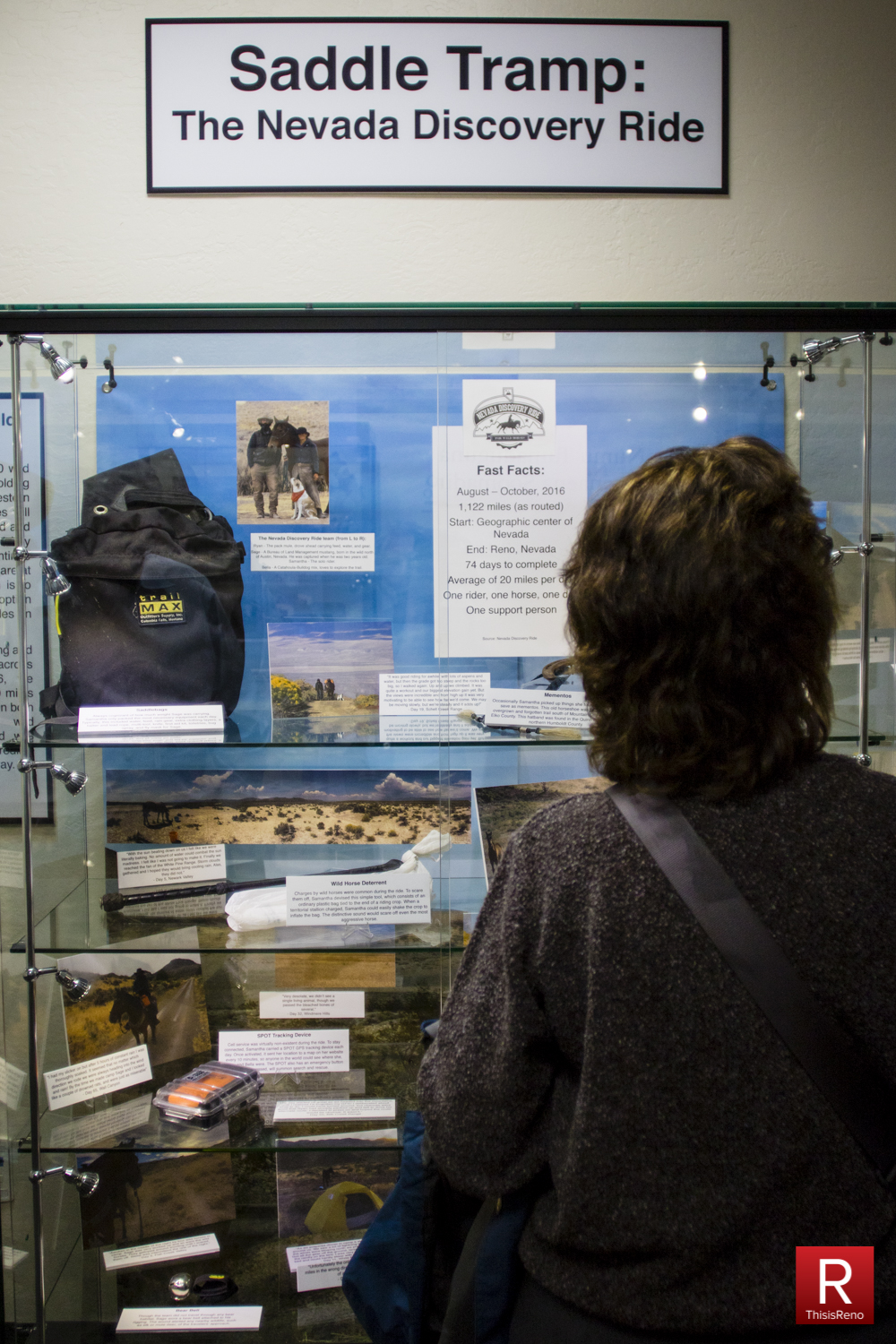 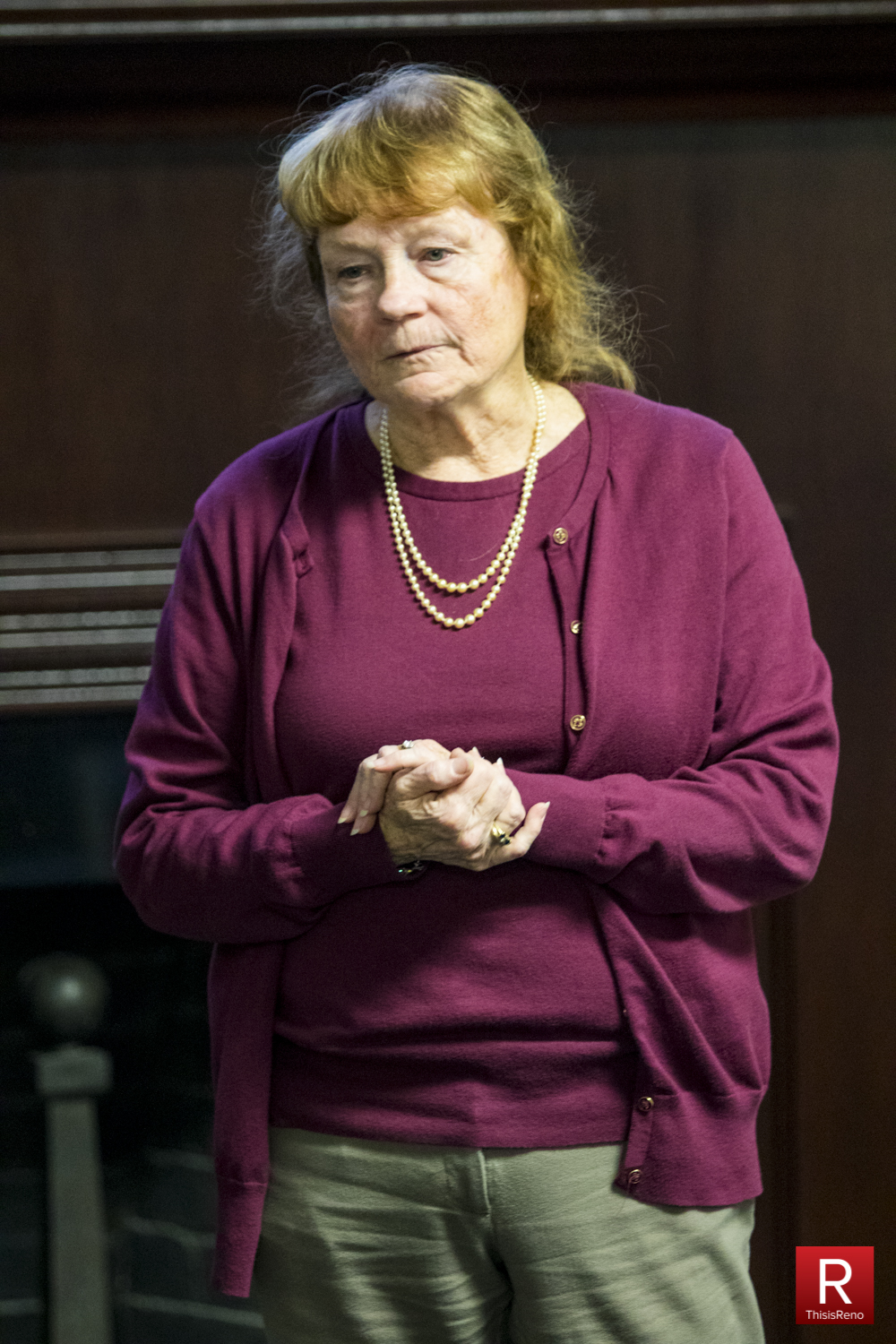 Horse rider hitting the trails again — from Vegas to...

Fun at the Lake Exhibit Open at University