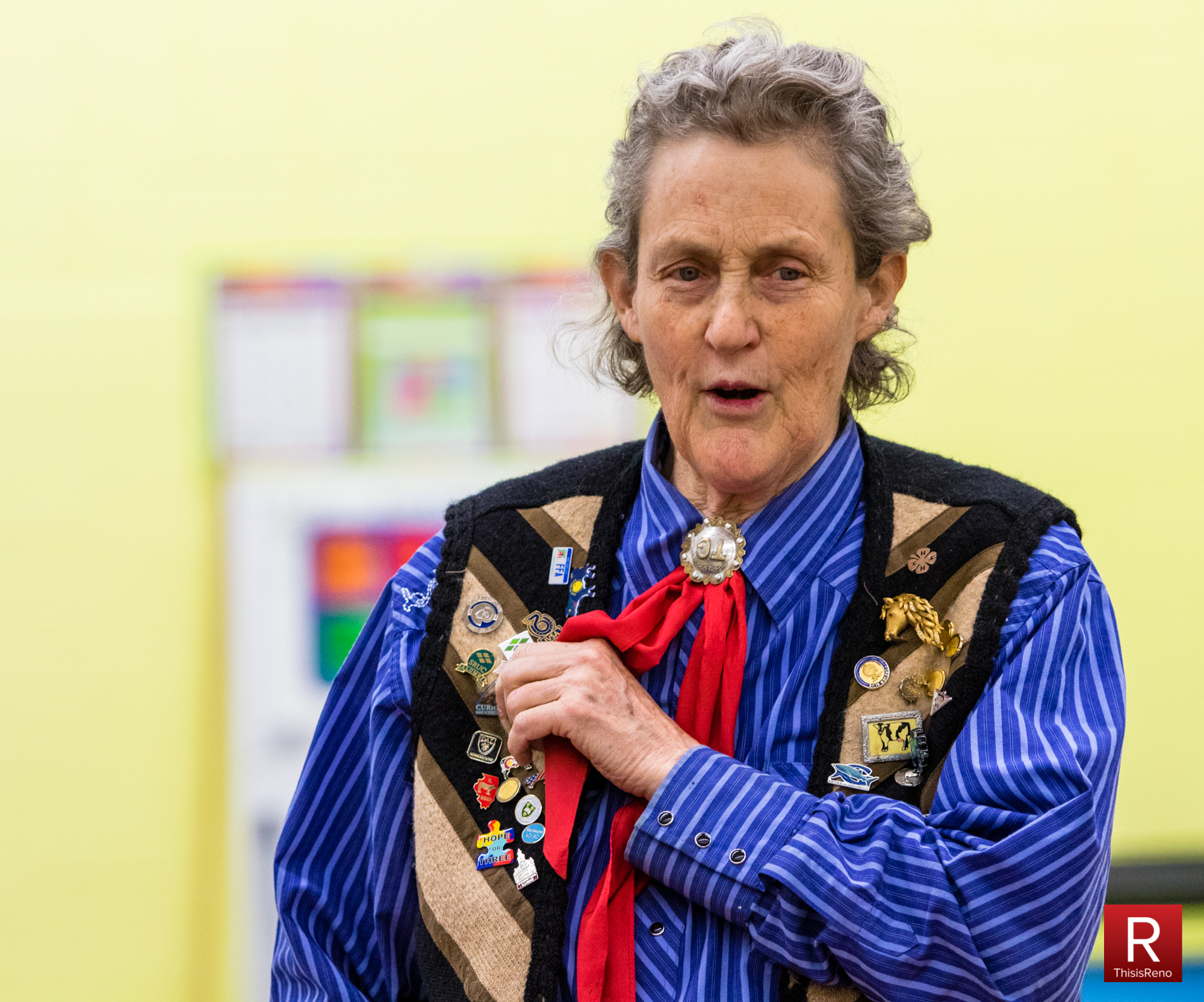 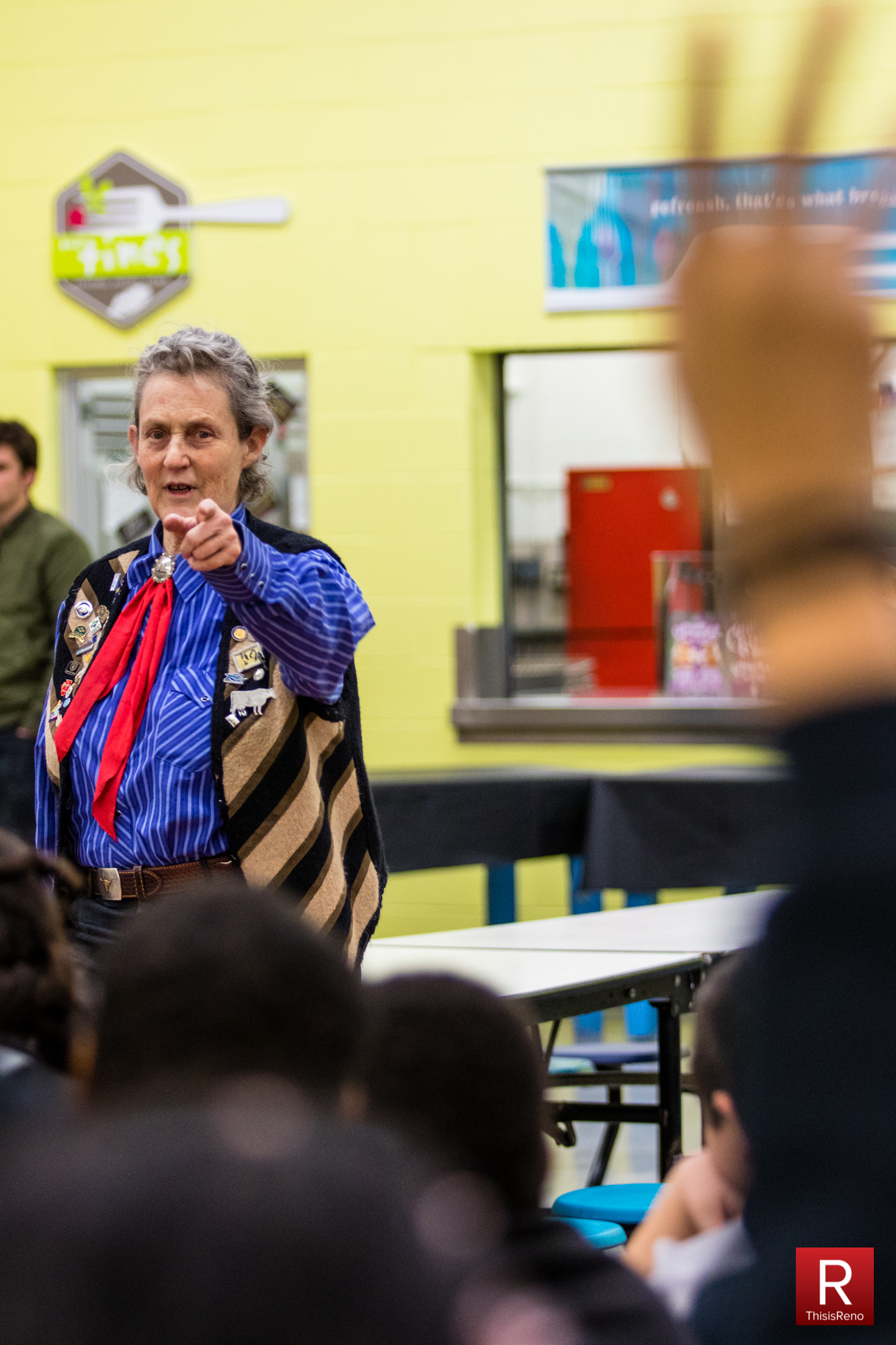 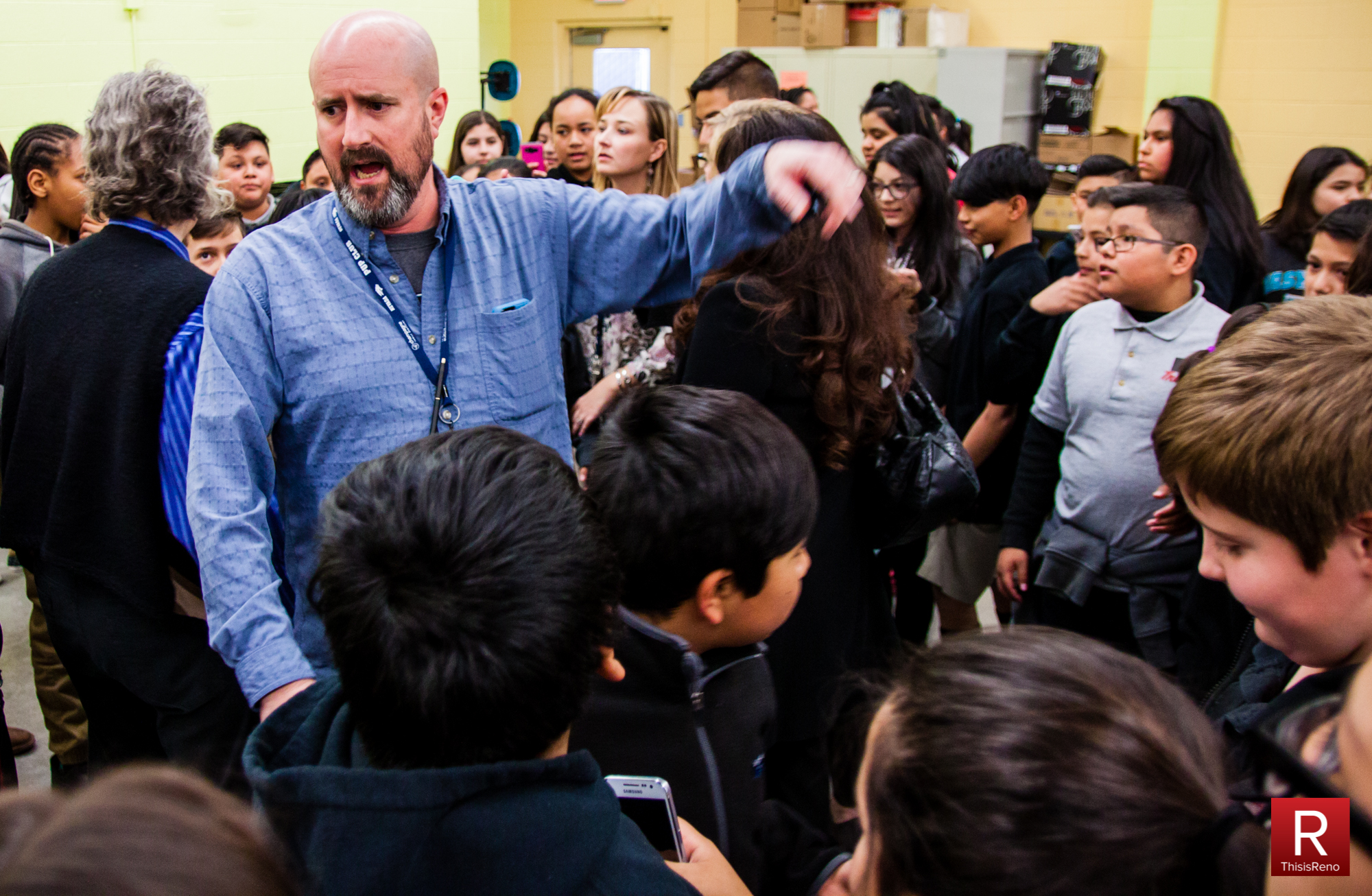 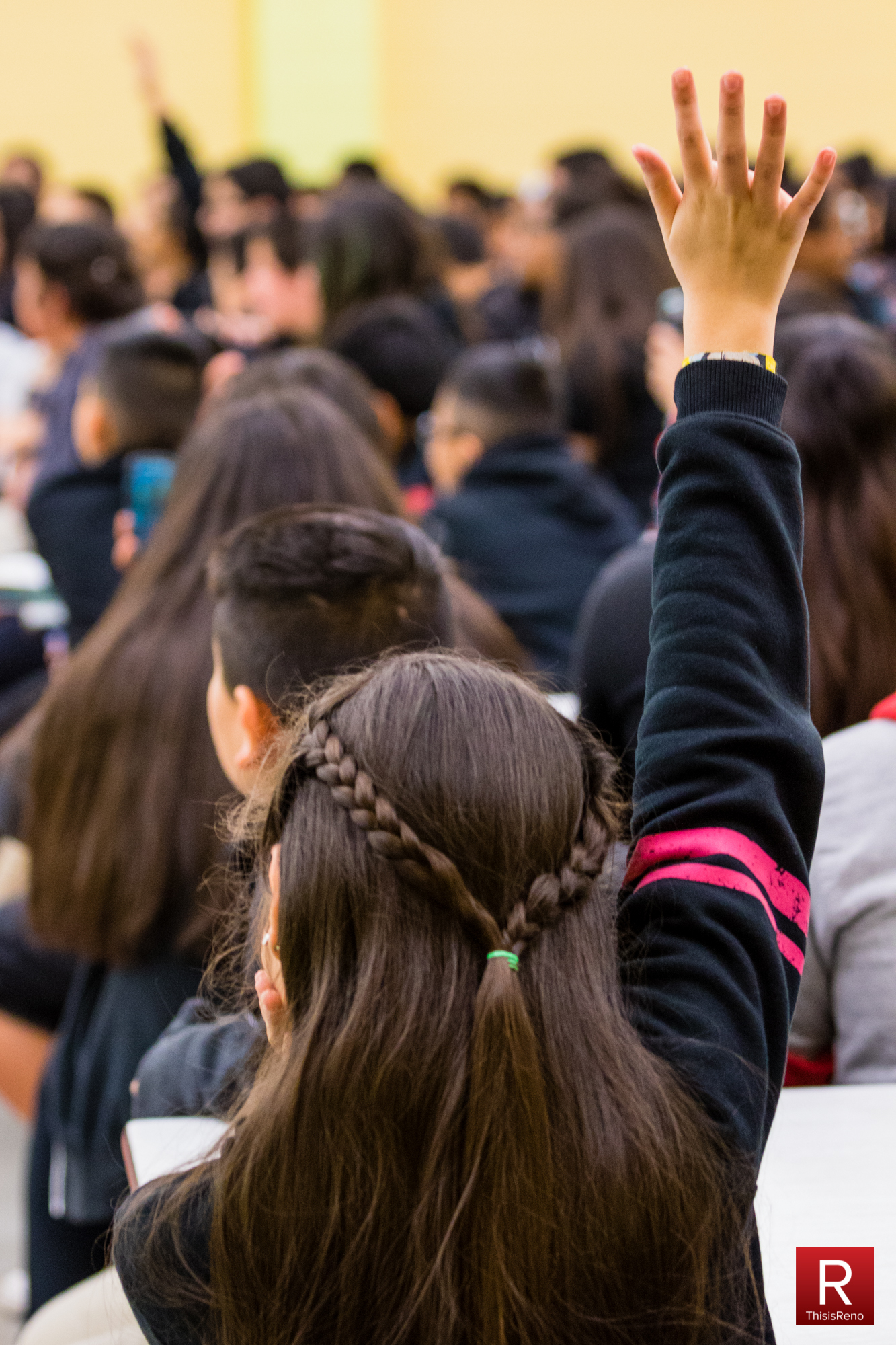 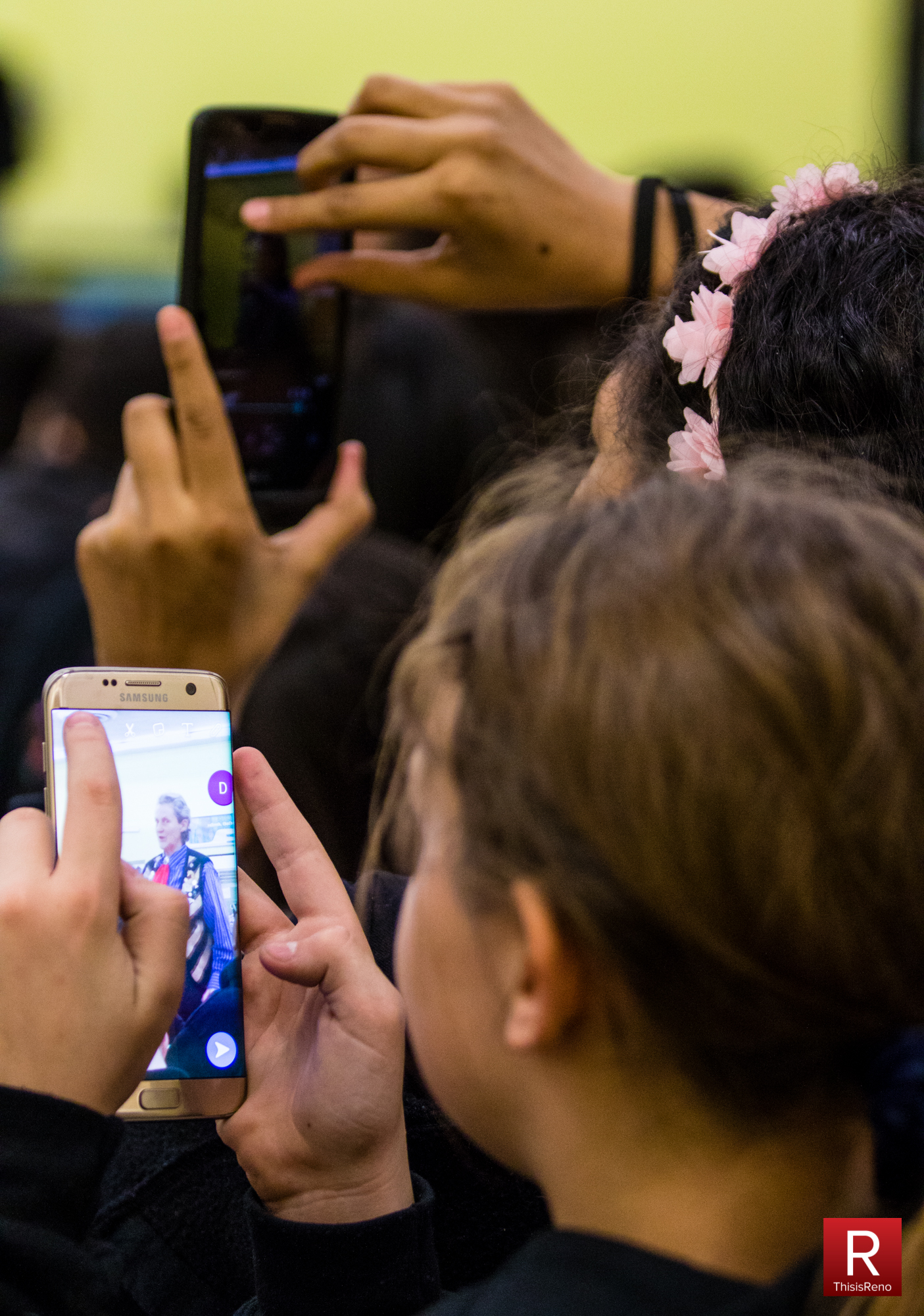 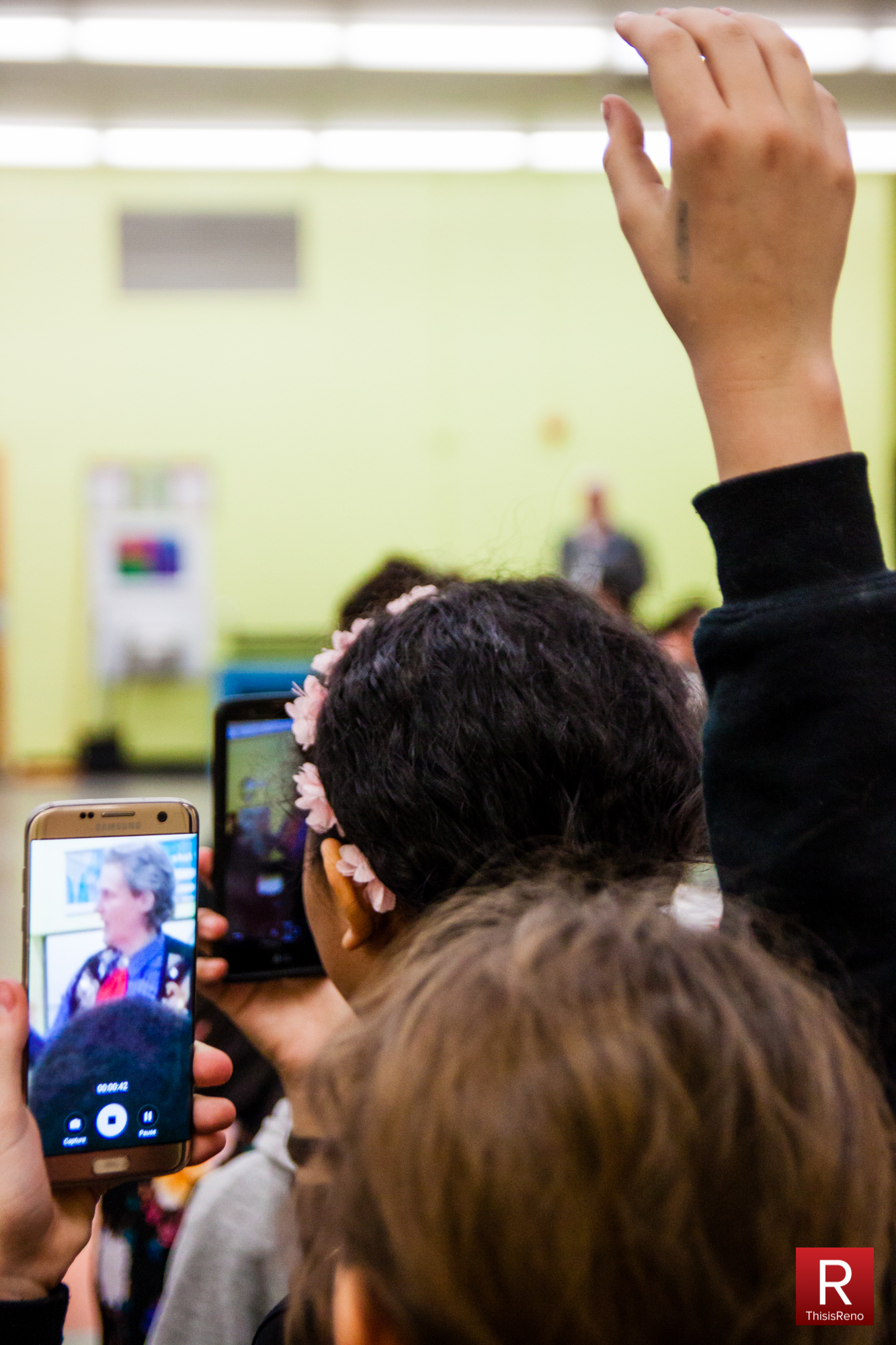 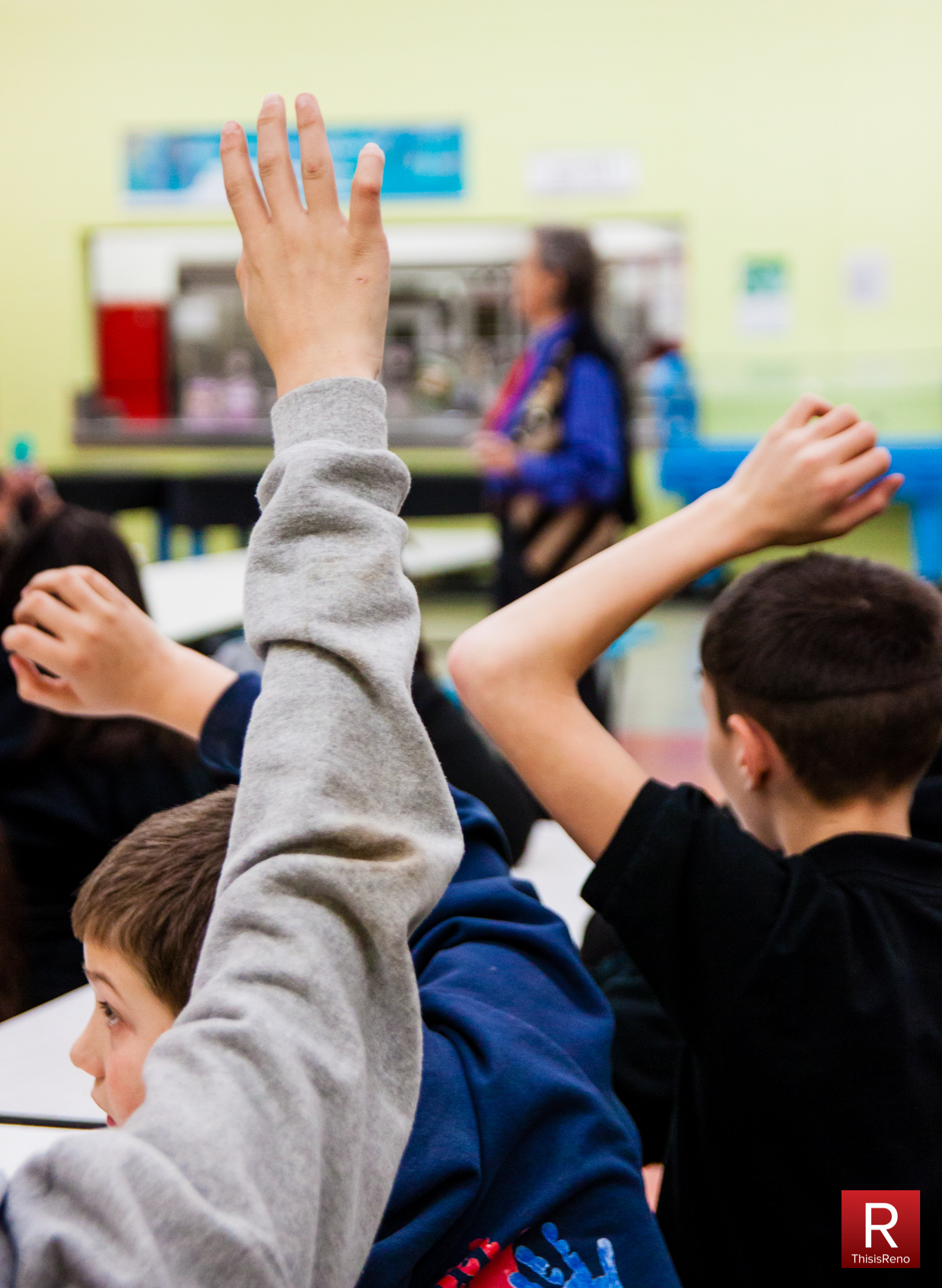 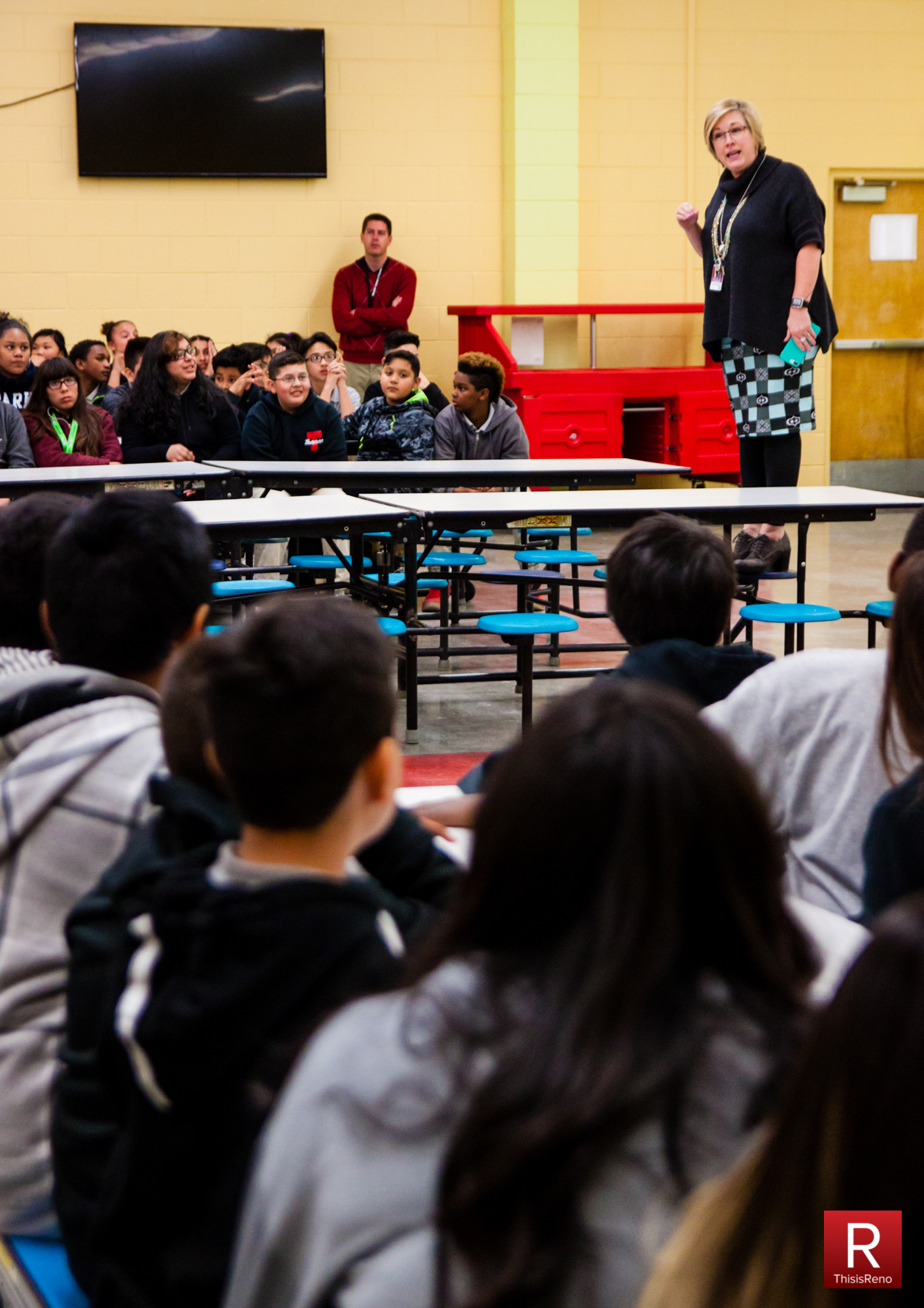 Members of the media gathered together in an empty cafeteria at Fred W. Traner Middle School Monday afternoon awaiting the arrival of Temple Grandin.

For those who don’t know about Grandin, she is a professor of animal science in Colorado, a TED Talk presenter, author, livestock industry consultant, on the New York Times list of most influential people in 2010, the inventor of the “hug box,” and she is autistic.

Upon her arrival, media and staff swept Grandin into the back of the cafeteria, both an opportunity for an interview but also as a hiding place.

The 6th grade class had been studying Temple Grandin for the past few weeks, and it was by good chance and the efforts of Kate Carter, a 6th grade teacher, and her husband, that the event had come to exist.

Staff kept Grandin’s scheduled appearance a secret until the last second. Carter stood on a table and informed the over 300-plus 6th and 7th graders that Temple Grandin was here to talk to them.

The room instantly filled with celebration so much so that teachers had to shush the room so that Grandin could be heard.

Grandin may very well be autistic, but it would be an injustice to say that that was what her meeting with these young students was about.

No, Grandin’s discussion with her young audience was about becoming a success in their own lives — she reiterated the idea of trying multiple careers and finding what you are best at.

She referred to this as, “Trying it on,” telling students to look for internships, finding what they love and going for it. She told a story from her youth about being scared to go live on a farm for a summer, so her parents gave her an option: go for a week, or go for the whole summer, but Grandin never told the class which she picked. She just said that she was a Professor of Animal Science because of that summer.

Grandin opened the room to questions, and hands immediately shot into the air as well as smart phones, sometimes by the same student. Students asked a variety of questions, from Grandin’s autism to her work with animals.

Whenever a student asked about her experience with autism she always answered the question but also redirected the conversation back to the topic of careers.

One student asked if Grandin had a difficult time being in college as a person with autism. Grandin seemed to stop and ponder for a moment before saying that, “at times it was hard, very hard” but that she found people with similar interests by going out and participating in various extracurricular activities.

She elaborated on going out and being active with other people, mentioning her distaste for video games for children, especially children with autism. Not for violence or sex, but because it allows children to become isolated.

Grandin is by no means anti-technology. She actively encourages students to look to technology to find a career and mentioned opportunities for programmers.

Another student asked Grandin about the pins on her vest, she explained they were from all the places she has visited and things she has participated in. This appeared to drive home her message of going out in the world and experiencing different things.

As time ran out, Grandin said goodbye, but the cafeteria descended into a chaotic swarm of youth, cellphones in hand, vying for a photo with the scientist.

Teachers struggled to keep any semblance of order, eventually resorting to whistling.

Grandin stopped and took photos with students as the swarming mass of camera phones grew ever bigger, eventually forcing even me up on a table to avoid the veritable stampede.

While Grandin remained calm and friendly, some teachers had clearly had enough placing themselves between Grandin and the students, eventually dispersing crowd.