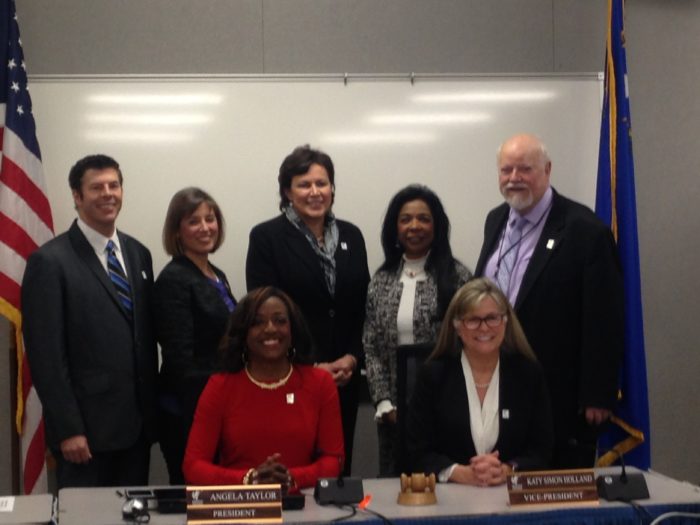 A resolution that reaffirms each child, regardless of immigration status, is entitled to a safe and free education was passed unanimously Tuesday by Washoe County School District trustees in response to community concerns about dialogue coming out of Washington, D.C.

Trustee Veronica Frenkel suggested a resolution be brought forward to provide accurate information to the public about what the school district’s policies and procedures are. Children can’t learn if they feel unsafe and too much mixed information is being circulated, she said.

“What I was hearing from some families in the community is that they were afraid—afraid for their kids because everyone hears all the dialogue and the worries and concerns,” Frenkel said. “We’re not changing anything. We’re reaffirming and sending a message to all our students that when you’re here, you’re here to learn.”

The board heard almost an hour of public comment, most supporting the measure, but nobody mentioned President Trump by name.

“Unless specifically required by a valid court order, district employees, contractors, volunteers, and representatives will not use district resources for the purpose of detecting or assisting in the apprehension of persons whose only violation of law is or may be being an undocumented resident in the United States, or failing to produce documents authorizing residency in the United States, or other information protected by the Family Educational Rights and Privacy Act,” part of the resolution states.

Manuel Mederos said the resolution was a positive and bold move. What goes on nationally affects us all, he said.

“Everyone, no matter their nationality, should feel safe in their environment,” Mederos said. “For students to learn, they cannot live and go to school afraid.”

Micah Stack urged trustees to resist the tyranny of anti-immigrant crusaders and said children shouldn’t be subject to clashing politicians.

“To subject children to a possible witch hunt would be unlawful and unconsciously immoral,” he said.

Opponents of the resolution said it’s not warranted. Some were concerned the resolution would mean loss of federal grants and could subject children to diseases brought in from other countries.

“Don’t rush into anything that will backfire,” Jeff Church said. “I urge you to look at this kind of thing before you follow through with a knee-jerk reaction based on something going on in the media.”

“I’d like to ask why this is a necessity and why take time to do what you’ve already been doing,” Vicky Maltman asked the board. “I feel your individual choice to bring this up at this time is unnecessary.”

Mike Thornton took the microphone soon thereafter and said now is “exactly the time” to come forward, noting the fear-mongering on the national stage.

“You’re taking a stand for human decency,” said Thornton, executive director of Acting In Community Together In Northern Nevada.

Superintendent Traci Davis said all students enrolling in school are held to immunization requirements, regardless of national origin and immigration status.

Board president Angela Taylor said no loss of federal funds is at stake because the district is following the law.

“This resolution doesn’t mean we’ll get a whole bunch of new students,” Taylor said. “Federal law says we educate everybody. This resolution is just reaffirming the law. I’ve never heard of anyone losing federal funding for adhering to the law.”