Throughout the month of January several local community partners observed Homeless Youth Awareness Month. The Eddy House Founder, Lynette Eddy, and Executive Director, Michele Gehr, spoke in front of Reno City Council during their Wednesday, Jan. 26 session to thank the mayor, council and staff for the proclamation presented in observance of the awareness month.

The proclamation, presented by Mayor Hillary Schieve, pointed out that the Eddy House has been working together with volunteers and other community partners and resources to provide drop-in services including affordable housing designed to promote self-sufficiency and empowerment. Additionally the mayor’s “Operation Downtown” has committed to helping this growing organization in its efforts to expand and serve more homeless youth with emergency housing and expanded social services. 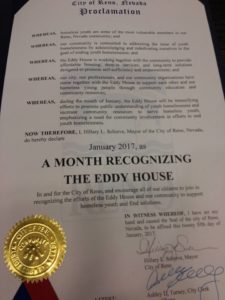 “It is important that the entire community come together to be a part of the solution for our homeless youth who are most often affected through neglect, abuse or worse, and who find themselves homeless and friendless in our city,” said Gehr. “The Eddy House has been a safe haven for these youth. Still there is so much more to do, and the community is needed to help us expand our facility and our services. This proclamation will help us reach out to members of the community to help save these young people, give them hope and skills that will allow them to become productive adults, also saving the city countless millions in services.”

Lynette Eddy began The Eddy House in November 2011 to address homeless youth in the Reno community.  It is located on 6th Street in downtown Reno and is one of the first points of contact for Northern Nevada’s homeless youth, 12 through 24 years old.