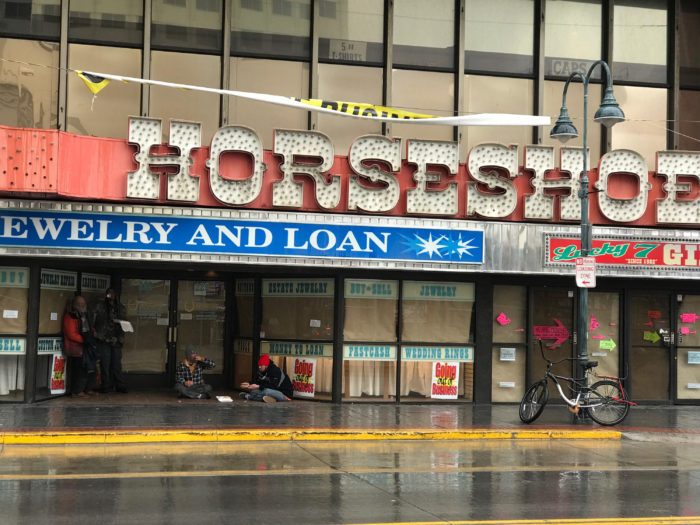 Area homeless people are facing even more scarce resources as the region experiences inclement weather. The homeless shelters and overflow shelter are both full, and many are maintaining refuge under bridges, overpasses and places where they can manage to camp in relative privacy.

But multiple sources told ThisisReno that law enforcement are threatening to arrest those camping under freeway overpasses. A notice posted at the overpass below the Walgreens downtown shows that the Nevada Department of Transportation (NDOT) is asking for belongings to be removed.

A man who goes by Larry told us that the Reno Police Department (RPD) and Nevada Highway Patrol (NHP) said that “all the homeless will be arrested if they do not move.” 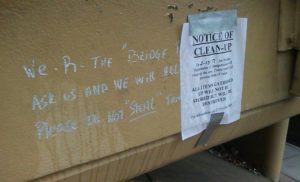 Mike Thornton of ACTIONN said that officials have been coming through to the bridges and warning people that they and their possessions needed to be removed by Feb. 9.

The date was later moved to Feb. 13, according to sources and the NDOT notice.

“There is this longstanding problem of so many homeless people,” Thornton said. “Everyone knows there’s nowhere for them to go, and let’s just roust them (rather than) provide a safe and stable place for them to be.

“There are sustainable, relatively easy solutions to keep people from sleeping under bridges and living along the river, but they continually rely on a program of, ‘well, we’ll ticket them and we’ll harass them,’ rather than something that’s more compassionate.

“Everybody admits there’s nowhere for them to go,” he repeated

We reached out yesterday to the NHP and RPD. Despite messages and emails, requests for comments were not returned.

City of Reno spokesperson Lauren Ball also was unable, by the time of publication, to find out if law enforcement was asking the homeless to move. We will update this story if new information is provided.

Sandy Isham at Volunteers of America said that, while shelters are full, day rooms are available.

“The shelters and overflow shelter are running full at this time,” she said. “An extra resource is the warming centers (day rooms) inside the Men’s and Women’s Shelters.  Men and women may come into the warming center, day or night, except when the shelters close for cleaning in the morning, and sit up at a table.

“Although it is not as comfortable as a shelter bed or overflow mat, this protects individuals from the cold weather while offering the safety of a supervised setting, as all shelters are staffed 24 hours/day.”

One homeless resident interviewed today said that he’s been living with his wife under an overpass for a month. He said that while he has not been approached by law enforcement to move, he said staying at the shelter “is worse than prison.”