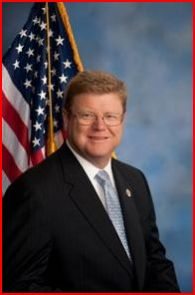 U.S. Rep. Mark Amodei, R-Nev., spoke to a friendly crowd Thursday at a meeting of the Reno-Sparks Convention and Visitors Authority (RSCVA), giving the board updates on federal issues affecting the region.

The atmosphere was a contrast to the resistance he received Wednesday during a Carson City Chamber of Commerce luncheon, where he and U.S. Sen. Dean Heller, R-Nev., ended up defending their records. More than 100 people protested on streets outside the event held at Gold Dust West Hotel and Casino.

Prior to beginning his address to the RSCVA, Amodei said he’d be brief because a colleague of his needed to catch a flight and then joked he wanted to leave the meeting as quickly as possible in case picketers showed up. However, nobody showed up at Thursday’s meeting to picket.

Amodei talked about Interstate 11, which is in the works between southern Arizona and Las Vegas areas and is eventually expected to reach Reno.

Preliminary plans for Nevada show I-11 being four lanes from Las Vegas to Mercury, he said.

“How it gets to Tonopah will be subject of other planning and how it gets from Tonopah to Hawthorne will be the last segment after I’m dead,” Amodei said. “If you set the right of way between Interstate 80 and Hawthorne, I see opportunities in a phase approach to build I-80 south.”

He noted that right of ways can’t be transferred without a route being picked first and encouraged the board to be proactive in keeping the Northern Nevada a priority.

“Any help you folks can be of interacting with the governor, lieutenant governor and folks from the (state transportation) board to keep us on the agenda, since we’ve slipped a couple of times off it—it’s not a complaint, it’s just a factual statement,” Amodei said.

He also addressed health care reform and said it’ll likely be done in pieces instead of starting over with a clean slate.

“I think politically speaking that Republicans now own health care,” Amodei said. “That falls under the category of, ‘Be careful of what you ask for because you just might get it.’ I don’t think the repeal and replace rhetoric from the election is going to continue.”

The Washoe County lands bill was also mentioned. The proposed bill would make some federal land available for future development and allow municipalities to acquire such land for various needs, among other things.

Action on the lands bill should be sooner rather than later because “funny, unexpected things” can happen at the last minute, Amodei said.

After Amodei’s approximate 10-minute presentation, only one board member had a question, and kept it lighthearted.

“Can we bring in some protesters from the outside?” Washoe County Commissioner Bob Lucey asked as laughter filled the boardroom.