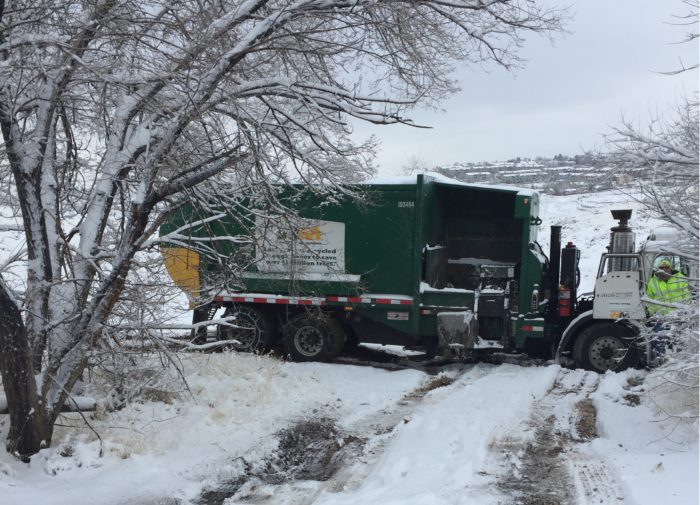 It was called a perfect storm. Just as Waste Management was rolling out its new single-stream recycling to unincorporated parts of Washoe County, it also struggled to maintain services to residents due to snowfall during recent storms.

The county’s new franchise agreement, approved by commissioners in November, had been in the works for more than a year. But Washoe County commissioners, including chair Bob Lucey, said the company’s roll out of the agreement could have been smoother.

He said: “We were looking for what the roll-out was going to be, and we were working toward what that communication to the residents was going to be, and so there’s been some challenges over the holidays, and they needed time to order the trucks and cans, so there was some preparation before we signed the agreement that needed to be in place.”

Washoe County Assistant Manager Kevin Schiller said that about half of county staff time, over the past several weeks, has been spent dealing with customer service issues regarding Waste Management.

Some residents did not get garbage picked up for as long as three weeks. Lucey said that was unacceptable.

The company’s spokesperson Kendra Kostelecki said they are looking to make improvements.

“We are part of a test market to improve our communications,” she explained. “We are developing a more nimble system to alert people that they can opt into, email and text, so unfortunately we don’t that available now.”

She added that the storm complicated pick-up efforts.

“As you know, the storm made many streets slick and narrow or soft and muddy,” she said. “While our drivers attempt to reach as many customers as they can, they sometimes encounter unexpected conditions. In fact, 18 trucks got stuck in snow or mud (during storms) attempting to provide service. That meant lost hours further down the route as they waited to be freed by a tow truck.”

The volume of complaints has prompted the county to consider other waste haulers. County staff will present options at a future meeting.