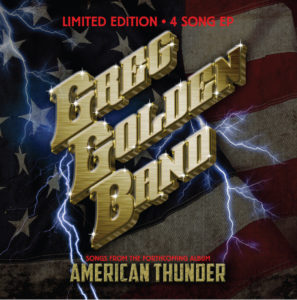 The Greg Golden Band released a four-song EP sampler of the band’s highly-anticipated full-length studio record “American Thunder,” due out later this year. The EP was released at the band’s recent concert at Rockbar Theater in downtown Reno on Saturday, Jan. 14, 2017.
The EP features new songs “Higher Ground”, “Rock and Roll Gambler”, “Hell or High Water” and “Another World”.
Frank Hannon, lead guitarist for the rock band Tesla, produced, recorded and mixed the new 12-song record, and will release it on his label, Red Hawk Records. Hannon, in addition to producing all Greg Golden Band music, plays all keyboards, synth and B-3 organ and adds vocals and some guitar on the new record.
The Jan. 14 show at Rockbar opened with Max Volume from the Max Volume Band playing a solo acoustic set, followed by local rockers Blackwater, a very special unannounced set by the Frank Hannon Band, and the Greg Golden Band headlining with support from Hannon for several songs debuted from the new album. 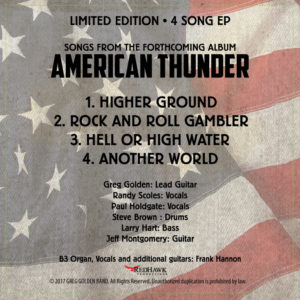 I was lucky enough to have heard most of the new record already and believe that it just might be the one to rocket the Greg Golden Band onto the national stage and on tour with the big boys.
The Greg Golden Band is: Greg Golden (lead guitar), Randy Scoles (vocals), Paul Holdgate (vocals), Larry Hart (bass), Steve Brown (drums), and Jeff Montgomery (guitar).
Pick up the new four-song EP at Bizarre Guitar located at 2677 Oddie Blvd. in Reno. This is a very limited edition that will sell out fast; call ahead to reserve a copy at 775-331-1001.
Be sure to read the complete review with photos of this show in a few days on thisisreno.com and remember to support your local bands and venues … Go To A Show!
[clickToTweet tweet=”Greg Golden Band Releases Sampler EP of ‘American Thunder'” quote=”Greg Golden Band Releases Sampler EP of ‘American Thunder'”]