Down By the River Homeless Face Difficulties 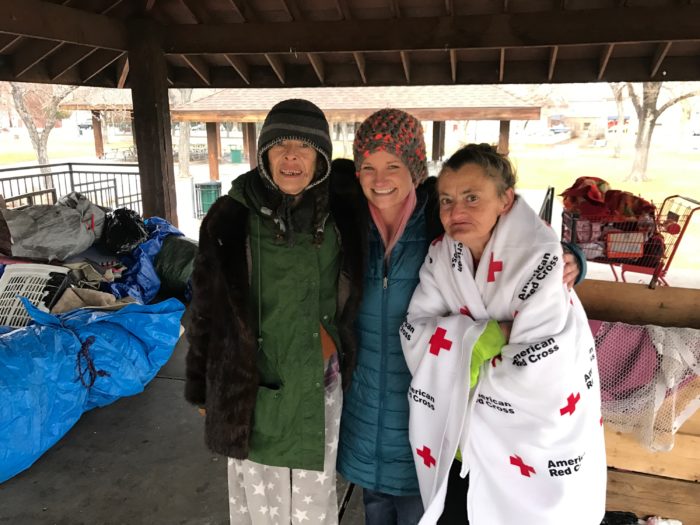 Amidst the chaos of rising waters this weekend, communities across the Truckee Meadows were faced with many challenges. Neighborhoods were evacuated. Businesses were sandbagging. But little attention was brought to our communities that are rarely seen.

Several community members helped our area’s homeless. Many had established their homes along the rising river banks and had resided there (mostly unseen in some areas) for some time. One such community existed in the Sparks industrial area. This “family”, built not by blood but by circumstance, had lived there until waters started to rise.

They took their possessions and their pets and fled to temporary shelters where the housed and the homeless huddled together with a common fear. But when the waters started to recede some could not go home.

A temporary camp was set up at Deer Park when the temporary Red Cross shelters closed. Elderly women, young and middle aged men and women sought shelter at the park, but they can’t stay there and are already on borrowed time. 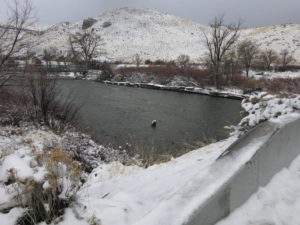 According to Jennifer Cassady, an involved community advocate, Sergeant Thelin of Sparks Police halted arrest attempts of this family which were threatened to occur at roughly 1 a.m. Tuesday morning. He told Cassady over the phone that they had until Tuesday night to relocate. If they stayed in the park, they would face arrest. If they went back to the river, they would face arrest. If they went to the shelters in Reno, several who walk and work in the Sparks area would be unable to get to work on Wednesday. All of their belongings and pets would be taken or disposed of. Some have already lost so much already.

As of 1 p.m. Tuesday afternoon a storage shed had been procured and two of the senior women there have a hotel room at least for the night, but many don’t have a lot of options. Several members of the community arrived in the rain to load their vehicles to move the family’s belongings and pets. A safe place to live and exist is all they wanted. Their “homes” by the river had given them that.

I spent yesterday evening with this gracious and wonderful group of people. We had lively conversations, talked about their jobs, their families and today a little about their circumstances.

One of the ladies keeps in constant contact with a daughter and grandchildren here. She attends her grandchildren’s parent teacher conferences and is involved in their daily lives but she is also obviously “mom” to this family at Deer Park as well. She is one of those who volunteers were able to get into a room for the night.

“Fox” is a part of this community that clearly loves and cares for each other. His sense of humor is contagious and he had us laughing in my car as I helped him relocate some of their stuff this evening. We got a couple of burgers at McDonald’s on the way and we chatted about life, friends and family. He has a 12-year-old daughter living in California who has become quite the accomplished BMX rider. His phone was turned off when he was arrested for a trespassing ticket he got for camping on the river. He couldn’t pay the ticket. Because of his phone, he missed out on a call for a job that would have paid more than $20 per hour. It would have gotten him off the streets and under an actual roof.

It’s a sad and cruel reality and cycle for Fox and those like him. After paying that fine with time in jail, he is among those who again face arrest simply because they have nowhere else to go.

Attempts to get any of them permanently housed through services has been difficult. Some of their items have been moved to storage, also procured by volunteers… for now. Tomorrow all of them will again be left with nowhere else to go.

UPDATE: As of Wednesday afternoon no further assistance arrived. No social workers or aid had arrived in the five days since flooding and dangerous weather conditions had begun.