By Bob Conrad Published: January 25, 2017Last Updated on January 26, 2017
The Reno Police Department is seeking more information about the encounter between this unidentified woman and an actor with Motown the Musical. 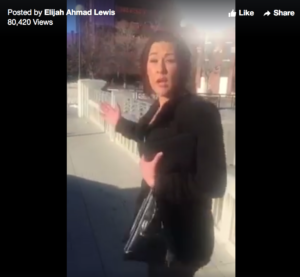 The Reno Police Department is seeking more information about the encounter between this unidentified woman and an actor with Motown the Musical.

The City of Reno is condemning racial slurs and an alleged assault caught on video by an actor for the show “Motown The Musical.”

Elijah Ahmad Lewis said that he was physically assaulted and repeatedly called a “nigger” by an unidentified woman yesterday in downtown Reno.

A video he posted on Facebook does not show the whole encounter, but the woman is shown repeatedly calling Lewis names, and approaching him, as he appears to walk away from her. The video his embedded below.

Lewis said he originally tried to ignore the woman and was physically and verbally assaulted by her before he started recording the encounter on his phone.

The city issued a statement condemning the attack.

The City of Reno does not condone the behavior that is demonstrated in the video that was posted earlier today on Facebook by a “Motown the Musical” performer who is visiting Reno. The City of Reno embraces diversity and welcomes visitors.

Many community members are also condemning the woman’s actions and are encouraging people to go see the musical in support of Lewis. The musical runs through Jan. 29, 2017 at the Pioneer Center. Information: http://www.motownthemusical.com/tour.php