By Carla O'Day December 13, 2016
Reno Police said that this photo shows Samuel Harry punching a 17-year-old passenger in the face after the truck accelerated into a crowd. Harry is being charged with battery. 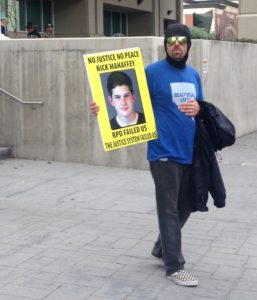 A protester outside the Reno Municipal Court during a hearing for Nicholas Mahaffey.

An additional video surfaced from a Columbus Day protest in downtown Reno where a man reportedly drove a truck through a crowd. It will be provided to defense attorney Patrick McGinnis who agreed Tuesday to a March 1 trial.

During a case status hearing with Reno Municipal Court Judge Gene Drakulich, defendant Nicholas Mario Mahaffey waived the right to a trial within 60 days. Drakulich said a second status hearing could be scheduled if even more evidence becomes available.

Mahaffey, 18, was arrested Oct. 14 on a misdemeanor charge of provoking assault and posted $1,000 bail three days later. He pleaded not guilty during his Nov. 9 arraignment.

About two dozen people—many of whom attended the protest—were at Mahaffey’s status hearing, which lasted fewer than five minutes. Upon arrival, Mahaffey was escorted into the courtroom through another courtroom. He then made a swift exit with McGinnis after the hearing.

During a news conference in October following the event, Reno Police Chief Jason Soto said the protesters initially gathered peacefully at City Plaza and that Mahaffey and a 17-year-old male passenger riding with him in his truck attended a portion of the gathering. The demonstrators later marched north on North Virginia Street toward the Reno Arch, some disrupting traffic. Mahaffey’s truck was then seen driving south in the southbound lane from Plaza Street. 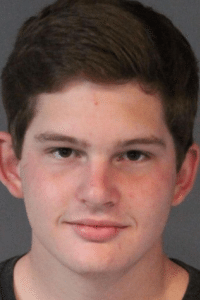 “Mr. Mahaffey approached in an antagonistic manner, revving his engine and repeatedly honking his horn,” Soto said. “Some of this behavior is readily available on video and has been posted on various social media sites.”

Soto said video showed some protesters telling Mahaffey to take a different route but others threatened violence to Mahaffey. He and his passenger were punched in the faces. Mahaffey then drove through the crowd and called 9-1-1, telling police he feared for his life.

One woman, Kitty Colbert, was hospitalized.

Colbert attended Tuesday’s hearing in a wheelchair and seemed visibly upset after Mahaffey walked away. She said her attorney advised her against speaking to the press.

Two protesters, James Fletcher and Samuel Harry, were charged with simple battery. According to Reno Municipal Court docket entries, Fletcher was found guilty and sentenced on Monday to 10 days in jail and Harry has a bench trial set for January.

City council to consider abolishing “one of the more busy...